Smoothhounds are one of the few species which  are showing an increase in numbers in north European waters, probably due to the lack of commercial pressure and the widely establish practice of catch and release from the angling perspective. DNA analysis is just one measure used to help assess stock levels.

These powerful, speedy members of the shark family are a popular target for both the shore angler and the light tackle boat fisher.

The long established method of identification of the starry smoothhound and the common smoothhound was to accept that the starry version had spots and the common did not. However until recently the only methods of accurately distinguishing between the two involved the killing of pregnant females as the common smoothhound pups have a placental connection to the parent through the wall of the uterus whereas the young of the starry have no physical connection to the mother and rely on the yolk sac during early stages of development. Alternatively, close examination of the denticles, the rough shark “scales”, on the body or in the mouth can produce a positive ID but all of these methods involve killing the fish. None of these methods is particularly productive for large scale studies hence little was known about the life of the smoothhound and historical data could not be relied upon given the problems of ensuring accurate species identification. 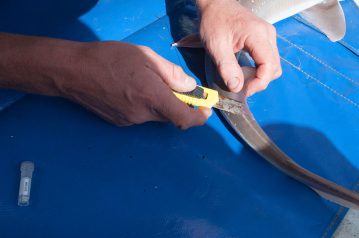 Cutting a sample for testing 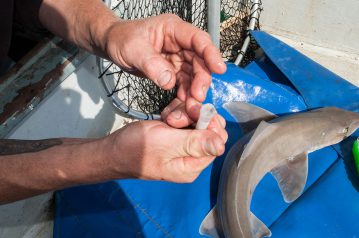 Fortunately a research project at University College Dublin, carried out by Dr. Edward Farrell under the supervision of Dr. Stefano Mariani of the SBES and Dr. Maurice Clarke of the Marine Institute, published in 2009, established an identification test using mitochondrial DNA. This involves taking a small sample from the rear dorsal fin and extracting the DNA to compare with reference samples. This allowed the scientists to quickly and accurately identify the two species and has resulted in further studies into the life of the smoothhound. 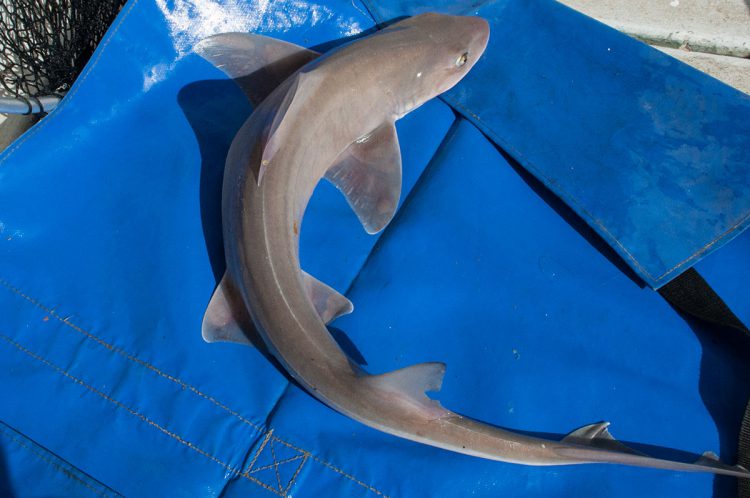 As a result of Ed’s study the various Record Fish committees are faced with a problem as the study did not find one single “common” smoothhound in all the samples submitted. The samples, which were collected from Ireland, Wales and the east coast of England, all turned out to be from starry smoothies. The 430 submitted sample clippings included fish with prominent spots, faint spots and those with no spots at all which were thought by the captors to be commons. The published study clearly indicates that the common smoothhound is in fact extremely uncommon and may in fact never be found north of its established  waters in the Mediterranean and more southern waters. 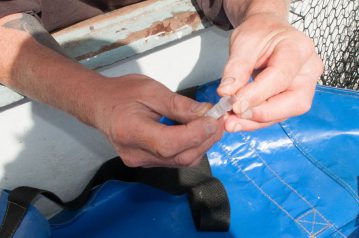 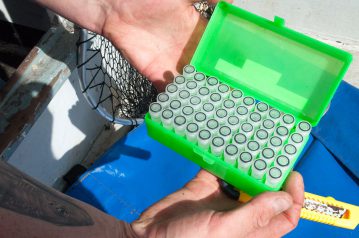 Batch of samples for DNA testing

Irish fish recorders have already accepted the study findings and now include only one smoothhound on their lists for record or specimen claims. Other Nations have been slow to catch on but gradual acceptance should see the Scottish and Welsh lists changing soon. Unfortunately, despite DNA evidence that would convict in a murder case, the curators of the main British list are not yet convinced. Samples are therefore still being submitted and it was good to see the process in action aboard My Way where skipper Gethyn Owen quickly and efficiently sampled and recorded the details of around a dozen smoothhounds during a recent boat session out of Holyhead. The gallery pictures clearly show the removal of the small sample from the fin of a hound which was then returned to the sea.