In the second of his shore marks series John Francis Costello takes us west of the Hoe and explores his local venues further.

Back on the main road, Union Street, follow the signs to Devils Point near the Stonehouse Barracks. Here there are three cracking river Tamar marks. The left hand side of the road will lead to a small café, toilets, and space to park a few cars near the tennis courts. Follow the path down and you reach Eastern Kings, a very rough ground mark but for those with patience it does hold some huge conger in addition to being a good mark for cod in winter and thornies in the spring. Mullet and schoolies are often seen cruising around in the early mornings and Eastern kings is also great for a spot of LRF or HRF as the rocks are home to almost all the mini species and some real lumps of wrasse.

Right of Eastern Kings you will find a large car park and directly in front of this is a rocky outcrop known as Western Kings. This is right in the mouth of the mighty river Tamar and the current runs strong and fast here but it can be a cracking wrasse mark close in to the shore along with eels and some large cod. For the LRF fisherman there are plenty of corkwing and goldsinny wrasse among the rocks along with the usual goby and blenny species. Casting a small, metal lure out into the deep water can result in great sport with pollack and mackerel that really give a great account of themselves in the strong Tamar current.

A couple of hundred yards round to the right again will bring you to the hard standing of probably Plymouth’s most famous mark, Devil’s Point. The Point is probably best known for being home to the current British shore record conger of 67lb. It is a tough place to fish but if willing to put the time and effort in results can be spectacular. Numerous double figure cod and ray have come from this mark along with the famed 40lb plus eels. 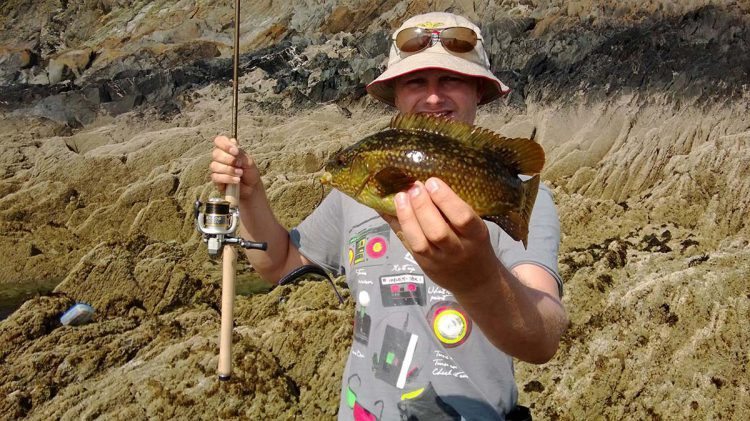 Devil’s Point is one side of a bottleneck where all the flow of the Tamar rushes through a sudden narrowing of the river that creates one hell of a strong flow. It can only be effectively bottom fished an hour or so either side of low water as even an 8oz lead will not hold bottom once the tide starts racing through. Small neap tides are better at Devil’s as they should give you a slightly bigger window to fish before the tide becomes overwhelming. In addition, you MUST keep an eye on boat traffic as Devonport dockyard is very close by and the wash of a large vessel can sometimes sweep right over the lower hard standing and could easily carry you or your gear into the river. This is a very popular mark with limited space so get there early to find elbowroom. It is a very hard place to use LRF gear but just dropping down the side of the wall can result in some tremendous wrasse and pollack.

There are several other marks on the Tamar worth trying some very easy to find, for instance the Torpoint ferry area is popular as is under the famous Tamar bridge, all these marks can produce flatties, schoolies ray, mullet and cod and whiting in the winter. When Leaving Plymouth through Saltash, under the Cornish side of the bridge, there is a small pontoon, which is popular in the winter for codling and dabs, but late summer it can throw up black bream, which are great fun on LRF gear.

Not strictly Plymouth, but it would be hard to write a guide to the local area without including the stunning Whitsand bay and Rame peninsula. Take the Torpoint ferry and then follow the signs to Antony where you will then find the directions to Whitsands and Rame clearly signposted.

Whitsands, at the west end of the bay, is a local bass anglers Mecca with all of the small bays along the long stretch of surf beach producing the silver fish. Top water lures and soft plastics all work well along here as will the humble lug worm cast behind the breakers.

At the eastern end of the bay is Rame and from here to Penlee is the LRF/HRF favourite with the gulleys being home to some monster wrasse, pollack, bass, and the usual mini species are present along with the odd surprise. Big shoals of mackerel and garfish often frequent the area, but be warned, this area needs some serious walking and climbing and the area can be un-fishable in a big sea as the swell can and often does run up and over the rocks. It is best fished with someone who knows the area, but can be a tremulous place to fish when conditions allow and well worth the steep walks.

Well, there you have my guide to the local area and as you will have gathered those of us who are lucky enough to live around Plymouth have some truly amazing fishing on our doorstep.

Do you target bass in Wales?