With 50 years of shore plaice fishing experience under his belt, the late Adrian Farley was well qualified to advise exactly when, where and how to catch prime flatfish on this side of the English Channel. 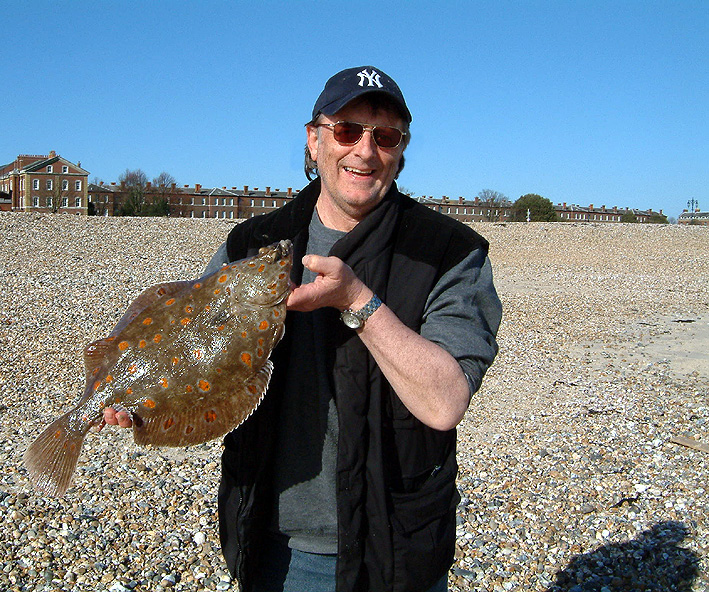 Plaice appear first on the Eastern Solent beaches, Hayling Island to Lee on the Solent where mussel beds and slipper limpets are prolific, together with various species of marine worms. It seems that pea-sized mussels and worms form the main diet early in the year, but as spring progresses, peeler crabs and sandeels will be sought out by larger fish.

Plaice migrate mainly eastwards from the Solent and fish can be caught from Worthing to Dover throughout late spring and summer. A second run of plaice occurs briefly again in the Solent through September and October, as fish once more prepare for spawning. A 2lb plaice in February is a near 3lb fish in September barring interference from trawlers. 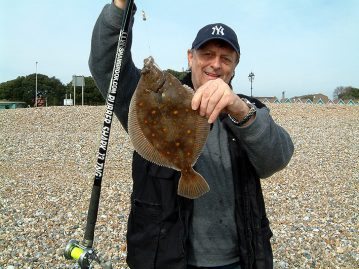 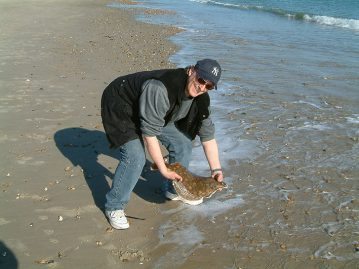 Autumn fish seem much more switched on to thin strips of mackerel or baits tipped with a neat sandeel fillet. Interestingly, I have caught several 3lb plus late season plaice on a high hook baited solely with mackerel strip or sandeel fillet intended mackerel and garfish.

Without doubt, it is weather conditions which will dictate how quickly plaice will be contacted in the early spring. Plaice are primarily sight-feeders and clear water is a necessity as far as anglers are concerned. Get a settled spell of high pressure in March/April when the Atlantic storm swells subside, and water becomes clear in the eastern Solent. This is the time to actively target plaice. Generally a couple of hours either side of High Water is most productive from local shores. Fishing for plaice in the Solent is a waste of time in rough onshore weather conditions. After-dark fishing for plaice also tends to be unproductive. 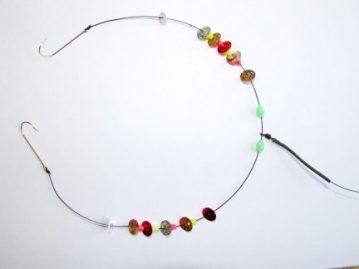 Some anglers deride the addition of flashy bling to rigs but I have watched plaice follow spoons, beads, sequins and even spinners to the side of boats in 8 metres of water, and have no hesitation recommending colourful additions to hooks snoods. Movement also tends to attract the inquisitive plaice. Try reeling in four or five turns every 2 or 3 minutes to increase your catch rate.

Many anglers make the mistake of adding sequins and beads directly between bait and bait stop. What you are looking for is visual ‘flutter’, so put beads etc above the bait stop, or even on the main snood-length above a wishbone rig.

In most shallow, sandy English Channel shore situations, I recommend casting between 90 – 120 metres. I had an experience several years ago when I regularly out-fished a good angler/tournament caster by 3 plaice to 1 until he ‘lobbed’ his long distance casts into the feeding zone. Having said that, I remember being blitzed by one time Welsh international angler and big hitter Bradley Riseborough in a local Open match, which he won by launching ragworm and razorfish around the 175 metres!

Ragworm excels here, and a bunch of smaller ragworms will normally attract more plaice than a single great big snake. Tip the worm off with a 4cm long thin strip of squid or razorfish. Lugworm will still catch fish, but is more susceptible to crab attention. 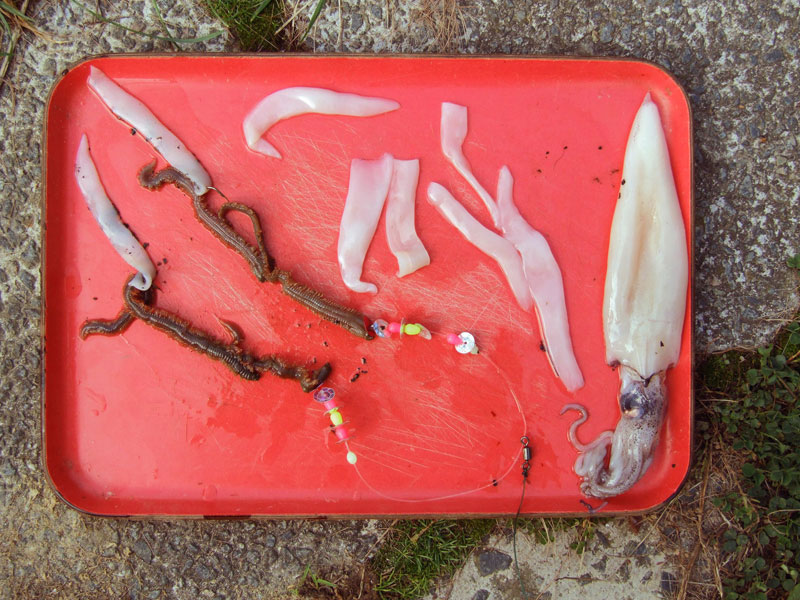 The ‘Drop-down’ rig is born

Since moving to Hayling Island back in the mists of 1987, I have had the time and opportunity to finely-tune rigs for various species found here. Perhaps the biggest rig problem I wanted to address was how to get a clipped-down rig to cast a long way and then present baits as close to the bottom as possible for cod and plaice particularly?

For years I plodded on with the normal clipped-down see-saw wishbone with size 2 Kamasan B940 hooks but I always felt that this rig could be improved. The arrival of the Breakaway Impact Shield gave me improved bait protection and better release, but there was still room for improvement in the overall rig. Breakaway’s Cascade swivel came next and I began to use extensively in my 3-hook match rigs when better casting distance was required.

It soon dawned on me not to crimp the bottom snood the normal 30 cm or so up the three-hooker, and from there it was easy. With cod in mind in the first instance, I made up a single pennel snood and used a short mono retainer at the top of the rig body to attach the cascade swivel for casting… and a very effective rig was born. Now the only problem with the mono link at the top split ring was that hook lengths had to be absolutely spot on to achieve perfect tension in order the hook length to be properly tethered for casting, and to ensure release thereafter on impact with the water. 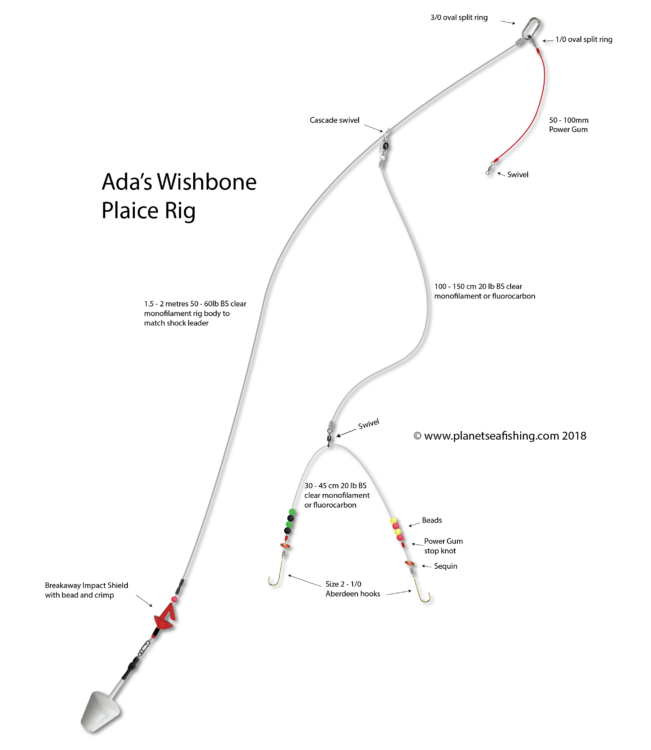 I had been using Power Gum as float stops for a long while, and it occurred to me that this material would give me the elasticity to be a centimetre or so out with snood-lengths without impeding rig functionality. After several years of experimentation I’ve found that about 2.5 cm of stretch in 10lb. Power Gum is about the right compromise to cover effective clipping down and snood disengagement on impact. 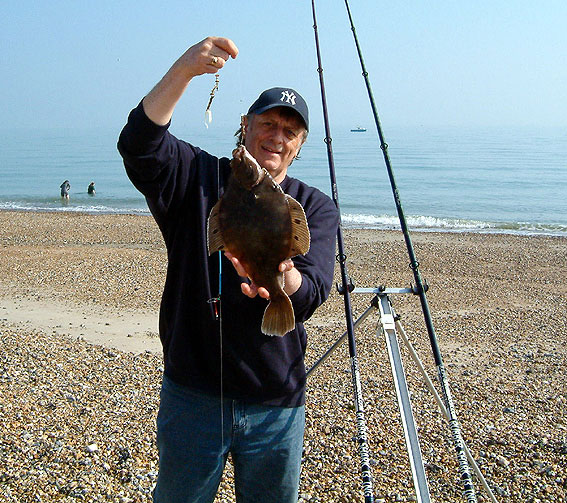 The real beauty of this rig arrangement is it’s adaptability it works well in strong lateral tide when casting uptide, and if maximum distance is required. Additionally, it works with the see-saw wishbone as shown, and makes a good cod trace when used with a pennel or larger hooks on the alternative wishbone. I guess I can claim to have fine-tuned the design for various species, methods and venues. I hope the ‘Drop-down’ rig is proves useful to you.

Alternatively if you prefer not to use bait clips, you can use the Dvice rig version (click on gallery below). The Dvice bait delivery system has made achieving good bait presentation on simple rigs with long trailing bottom snood a piece of cake. The Dvice version of the rig arguably doesn’t cast quite as far, but it’s no big deal. When it comes to plaice fishing the Dvice is a very functional item of tackle.