Marc Cowling is a thoughtful, perceptive shore angling guide who has an extensive knowledge of Devon bass fishing and other speciesin the south Devon area. His passion is lure fishing for the bass which lurk around the rocky shoreline and in this feature, he outlines the steps required to locate a new mark.

Despite all my efforts during my most recent bass fishing forays, surface lures produced only a few small fish. With settled conditions and low water spring tides combining, I thought it would be a good time to head out exploring for some new marks for Devon bass.

With future clients in mind, I wanted to see if I could locate some additional marks near my more ‘predictable’ areas. The theory being that we can ‘search out’ the holding or positioning bass if we need to, rather than staying in one spot for longer periods waiting for the bass to find us. 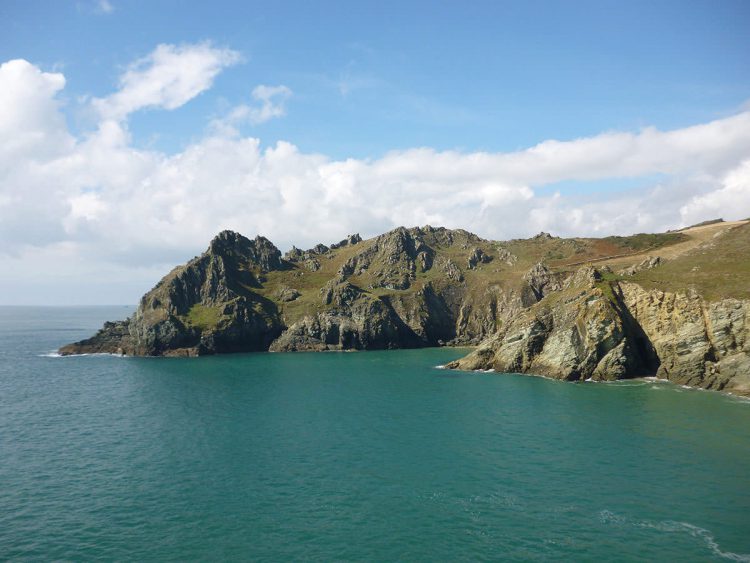 Having studied Google Maps over the previous week or so, I had earmarked some ground that warranted inspection in person, during the lowest tides. It was pretty warm in Devon for the time of year, so I made sure I had plenty of water, and a pasty, with me, and looked forward to breathing in lots of fresh air.

On my chosen morning, I fished on the ebb starting at 10:30 two hours after high water. As this was ground that I hadn’t fished before, my method was to simply position surface and soft weedless/weightless lures close to and around the larger rocks protruding above the surface. I tried to keep a low profile, as the water was very clear, and used the rocks for cover wherever possible.

This type of mark is extremely common here along the stunning South Devon coast. Generally, at the extremities of beaches or small bays, tucked in under the cliffs and accessible only for a few hours due to the tides. They will have a mixture of interlinking gullies, deeper pools and wrack covered ‘fingers’ of rock. These features are interspersed with patches of shingle or sand, therefore attractive to all forms of Devon bass fodder – lovely! 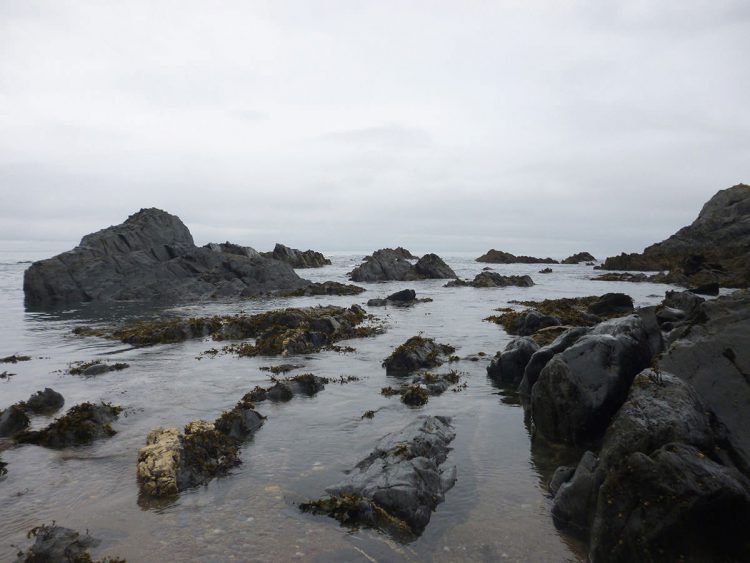 I really do like to fish the periods of the tide when it is running at its strongest, normally the middle two hours of the flood or ebb. However, I was astonished at how quickly the water receded at this initial mark. With only one tiny pollack and a similar sized bass, both taken on the IMA Salt Skimmer, Rattling Bora, from Fishonlures, I decided it was time to move on.

As the tide was ebbing and it was very calm, my ‘next bay syndrome’ kicked in. This compulsion means I just have to see what is around the next headland, point or promontory, you just never know! With the sun now starting to peep through I was hopeful that the changing light conditions might stir the bass into attack mode, but no such luck I’m afraid. 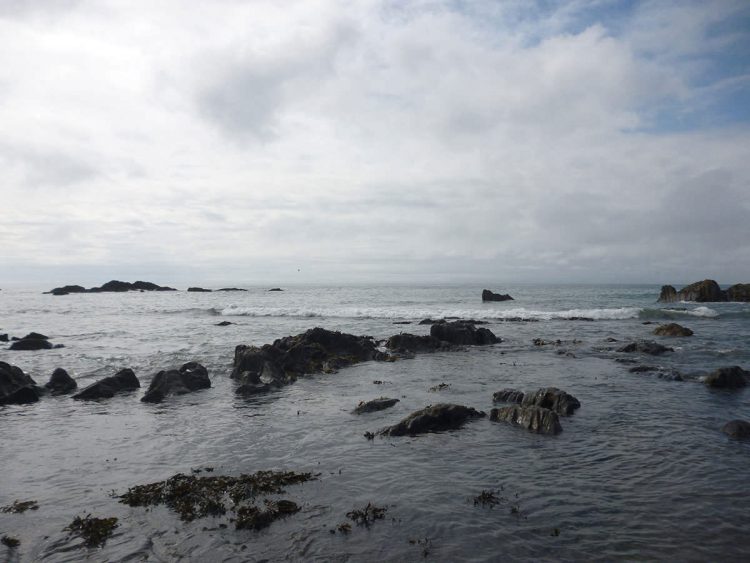 If there were any about presumably they had already vacated the reef seen in the foreground of the mark. However, after scrambling out across the rocks just to the right, I was eager to ‘bounce’ a paddle-tail lure and a weightless weedless worm around on the large sandy patch just beyond the breaking wave in the picture. My theory being that there may be bass waiting for the gobies, prawns to vacate the area as the tide dropped.

Now when I get excited about a mark, I always want to fish it straight away, even in Winter, or as soon as tide provides cover but with other commitments later in the afternoon so it would have to wait.

What I like about this particular mark is the exposure to the open sea, it isn’t tucked away behind a headland and also the natural ‘links’ via the gullies pictured. I can imagine bass and wrasse following these routes in with the flooding tide. And, although it does look very snaggy, you should feasibly get the lures back at low water. 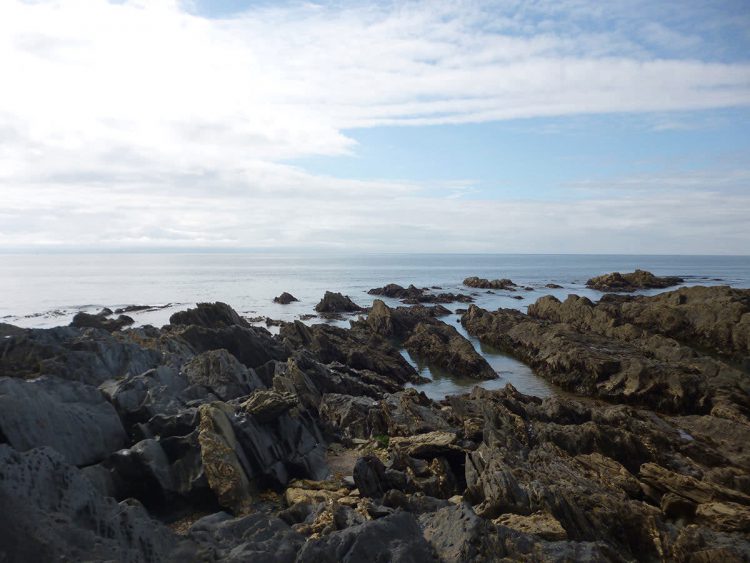 By standing on the rocks on the left of the photograph, I will be aiming shallow diving sub-surface lures or weedless, weightless soft plastics into the sandy zone as the tide floods and the Devon bass move in. An alternative will be to work a surface lure over the entire area once it is deep enough to do so.

Happy with my latest discovery, I pushed on, finding another attractive spot that I could easily access at low water without scrambling over a cliff edge. This mark would be fishable for the first two hours of the flood, or on the last two hours on the ebb. My stance will be the lighter grey rocks you can see in the bottom left of the photograph or slightly to the right, casting up the gully to the right of the largest rock. 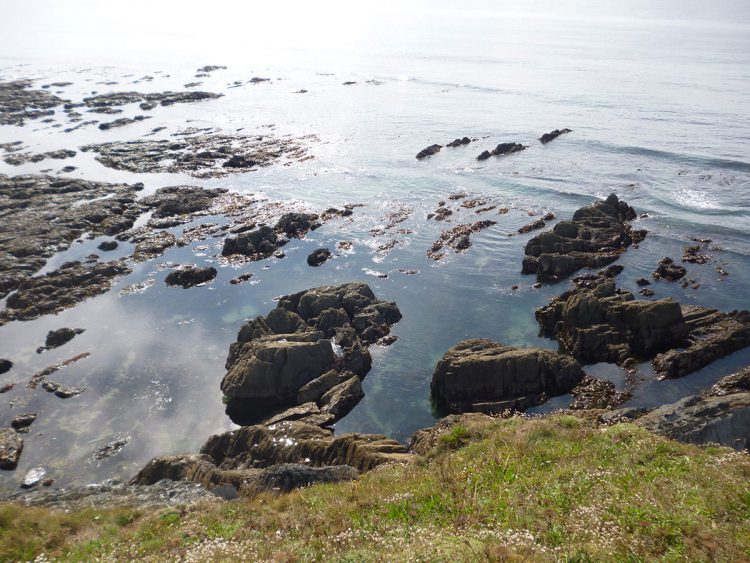 Again, note the large rocks interspersed with weed and some sandy patches, great ambushing ground with lots of cover for a hunting Bass. In the weather conditions this day, if you could manage to stay out of sight, fishing would have to carried out in a very subtle manner. Fluorocarbon leader with a soft plastic lure would probably be the way forward. In choppier conditions with a bit of colour in the water a shallow diving lure could work. Where as in rough conditions with waves breaking across this whole area, I would look to use a surface lure.

Lovely Day Out and Lessons Learned

All in all, it had been a pleasant day out in what is, without a doubt, my favourite part of the world. I’ve been fortunate enough to have visited lots of different parts of the UK, Europe, The Middle East, Canada and the US, but South Devon on a rough old day or a beautiful calm sunny one does it for me.

Even though I did manage a couple of tiddlers, sometimes, you can learn just as much from not catching anything, as you can from hooking into a beast on a remote rock mark. If the conditions suit having a look or exploring, rather than fishing, then having the motivation to walk a few miles could prove beneficial in the future, time will tell for these particular marks of course. 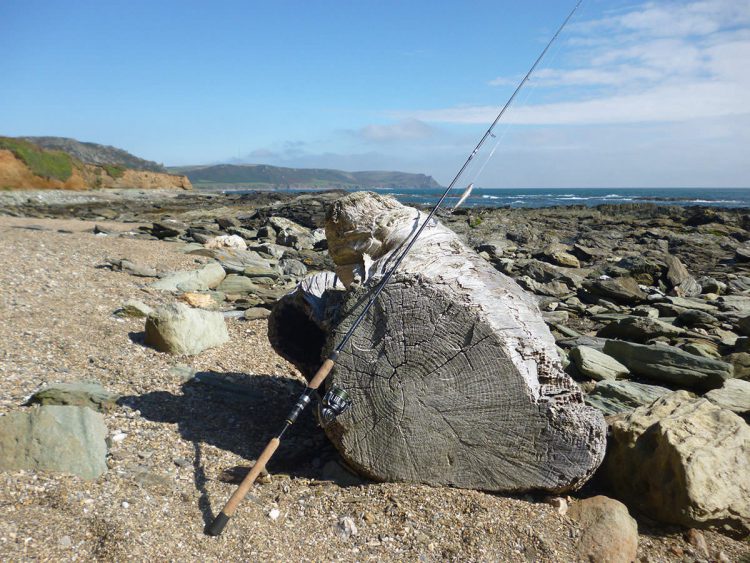 Marc provides extensive tuition and guiding services between the months of April and January with all the gear supplied. His website, South Devon Bass Guide, has all the information required regarding dates and prices for the guiding as well as providing a valuable blog resource for the bass angler.

How to Tie a Bagnall Bar Rig