Giant rogue waves from out of nowhere are a persistent winter danger to rock anglers. Steve Souter admits experienced rods get caught out too, and hopes that relating a recent close call will help teach us all a valuable lesson.

However romantic a picture we choose to paint of particular rock venues there is no denying that this type of fishing can be perilous, and fraught with dangers capable of unmanning the most capable and experienced anglers, as well as the gallous and unwary. As a time-served rock angler, I’d like to think I’m just about as safe as houses in my fishing activities. But just how safe are any of us from the sea and ultimately from ourselves?

This winter has again seen angler fatalities and many desperately near things from rock marks that will have gone unreported. Chillingly, my eyes have just lifted from a short newspaper column flimsily detailing yet another angler tragedy. 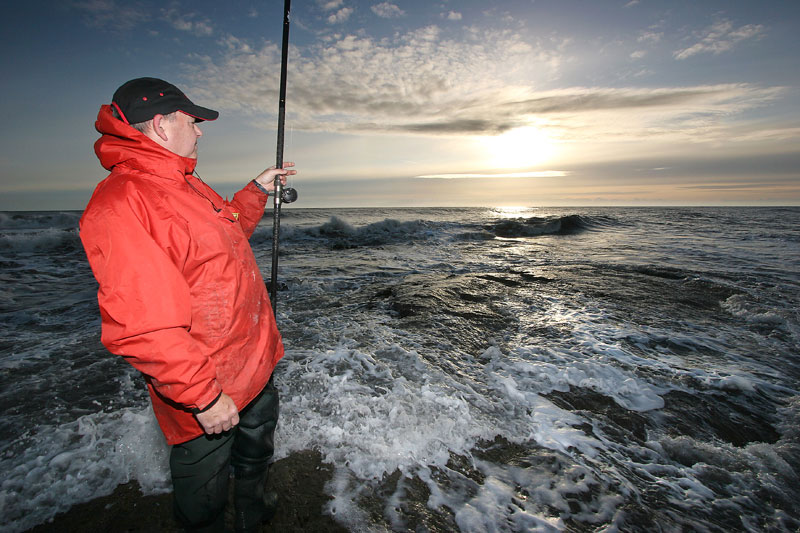 Among experienced anglers and the wider public alike, there is a tendency towards the somewhat forgivable assumption that stupidity, inexperience or both are the main contributors to such occurrences… I confess to often finding my own thoughts straying along that line. But rest assured I’ll be much more open-minded in future as a result of my own recent experience.

The true and near tragic events I am going to relate have prompted me to seriously rethink how I tackle all rock marks as a matter of course. It would have been easy to bury what you are about to read, but I consider what occurred to be the most valuable fishing lesson that I have ever had hammered home. So to hell with any dip in image value, and let’s hope this story serves as a priceless lesson to all.

The sea-state was moderate and falling, and certainly not what you’d describe as dangerous. In fact, the odd larger breaking swell apart, fishing conditions in terms of comfort and the likelihood of catching were very good. My companions and I were to fish the back end of the ebb tide and as much of the flood as possible. With high water at around five o’clock, we expected to be able to fish most of the incoming tide, but the plan was to pack up at around 3pm while we still had a measure of daylight. 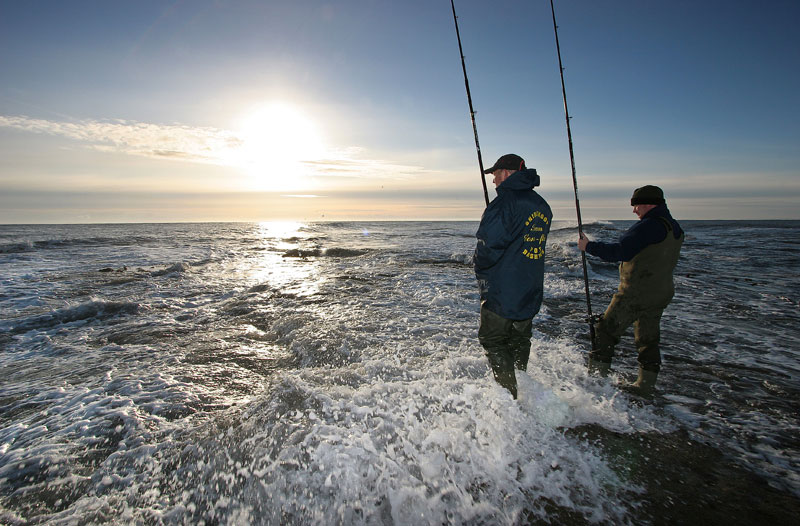 Breaking away from the trailing pack, Jim and I had clambered across a system of sea-greased volcanic rock formations to reach some promising and safe-looking high edges which angled diagonally seaward from below the cliffs. Jim led the way as I gingerly followed on, having demolished my knees in an unintentional somersault on a slippery rock surface the previous day.

The particular mark Jim settled on offered plenty room for several anglers. It was highest towards the front edge and gradually stepped down in various uneven stages to the lowest part skirting sea level. Another angler in our company arrived just behind us and chose to set up slightly further back, just behind the low area described as we had apparently grabbed the prime spot. I commandeered the highest point available, where a suitable flat platform allowed me to arrange my clutter out of harms way. Jim meanwhile set his rod rest a few feet away and a little further down the staggered rocks.

I had spooled with fresh mono the night before and cast out with just a lead to wet and bed the line before getting down to business. I had just retrieved the lead and swung it in to hand and noticed Jim teeing up to cast his bait seaward. I turned away, and in the process of reaching for my own baited rig, heard a frantic yell from the angler along the rock. I swung round in alarm. Momentarily confused, the freakish situation took but split second to register… Jim had disappeared! 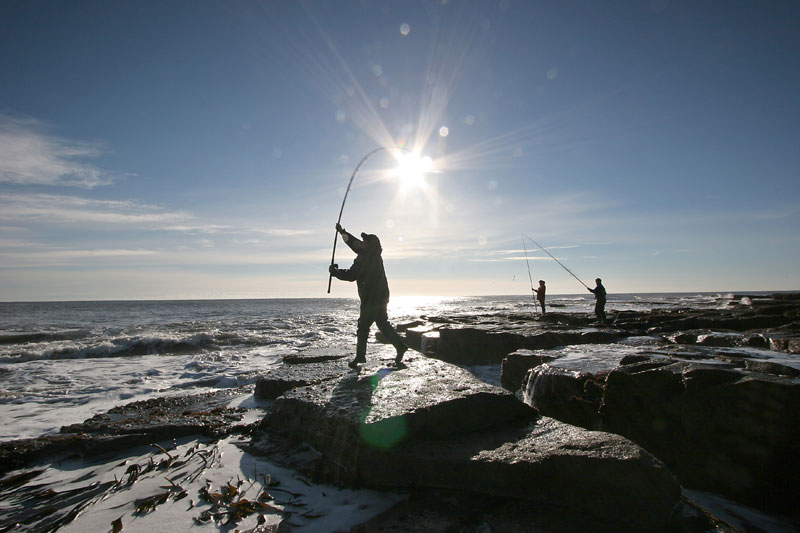 Now you see him…

Of Jim, his rod and rod rest, there was no sign – nothing. The space he had occupied an instant before was awash with a cold torrent of North Sea. This was insane. I spun frantically all about barking his name while desperately scanning the sea for any sign of my pal. Panic hit me a hammer blow and my legs took on a slack rubber constitution. My first thoughts were that he must be hiding or larking around. But with hindsight, that was utterly ridiculous as there was nowhere to hide, and only one horrible possibility existed.

I’d heard nothing untoward, but with the massive volume of water still spilling off the rocks mere feet below me where moments before there had been none, my nightmare conclusion could only be that a huge roller had burst over the lower rocks and swept Jim to God knows where!

Seconds later, some 30 yards to my right a head broke the surface of receding water. As the sea drained back I could see Jim literally clinging by his fingernails to the sloping lip of a ledge.  I made for him, but with a quick sideways glance I decided that I just couldn’t get close enough for fear of another wave catching me similarly unawares. In that same breath, a swell running the edge of the rocks buffeted Jim rear-first and deposited him on all fours almost at my feet. Helping a soaking Jim to stand and leading him clear, stupid questions like “Are you Okay? What the hell happened?” went breathlessly unanswered.

From realisation that Jim had been swept in, to helping him to his feet mere seconds had elapsed. Slumping down, breathless, battered, bleeding from several wounds and half drowned, Jim was shaking uncontrollably with shock and cold. Regaining a bit of strength to speak, all he said was, “Stevie, there was nothing I could have done – nothing”. 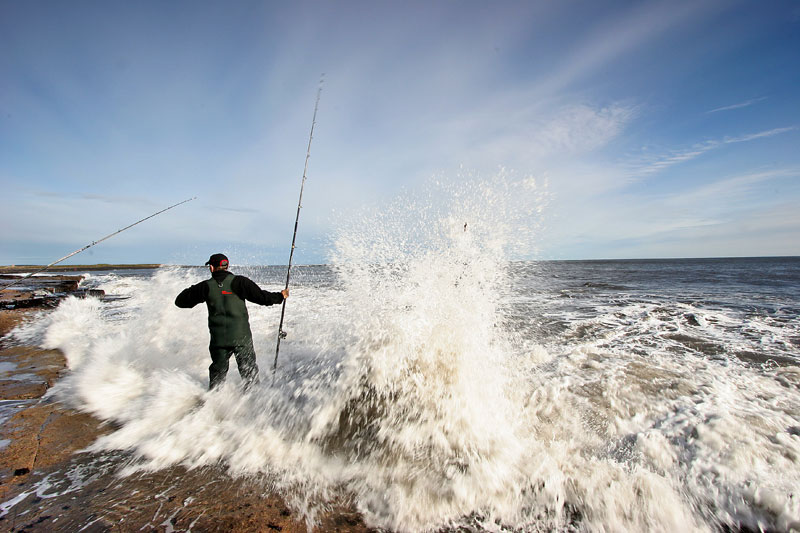 A couple of other anglers in our group were now on the scene. My immediate concern now was the cold. Hypothermia was a real danger here and first priority had to be to get Jim out of those wet clothes and warmed up pronto. Fortunately the cars were less than 10 minutes away in more or less a straight line from where we were. I know stories of anglers suffering the onset of hypothermia quickly wanting to lapse into sleep…no such fears with Jim! He was all too aware of the dangers, and made for the cars like a sodden rocket.  Luckily I had a change of clothes stowed in the boot and we also managed to rake up a couple of rather fishy smelling towels.

Modesty had to go out the window, and the several passers-by must have wondered as to the sanity of the stark naked man madly towelling himself down in sub zero temperatures in full public view. But dried and thoroughly thawed out following a 45 minute marriage to the car’s heater on full, Jim was feeling almost himself again if indeed such was possible.

Even the devil you think you know is more than capable of leaving teeth marks on your behind if you are less than completely careful! Rogue swells and large freak waves are an incessant danger in the area we were fishing. The crazy thing is that both of us have been fishing the north east coast of Scotland for donkey’s years and know the dangers. It would seem knowing the dangers is one thing however, while avoiding them altogether is something entirely different. 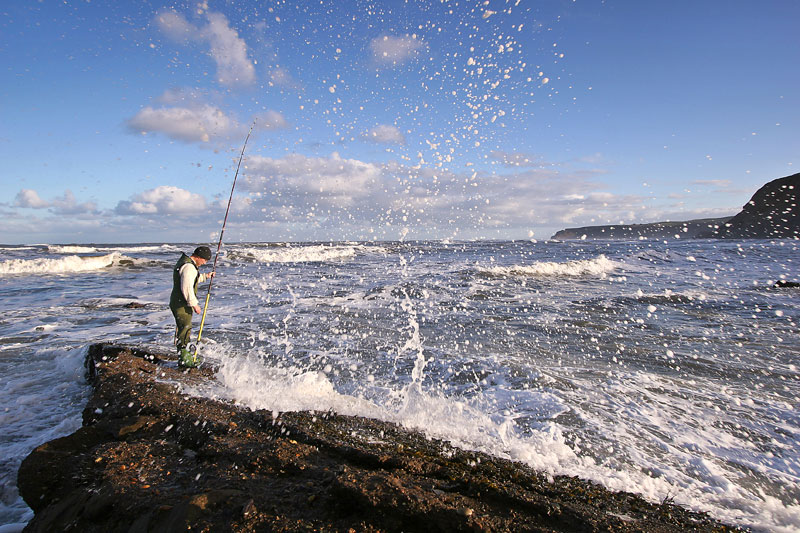 Conversation with the angler who had seen everything and initially shouted my attention, revealed Jim had indeed been clattered by a huge swell that burst on the rocks and sent a force of water hurtling over where Jim was standing. Jim it was reckoned was standing at least 30 yards from where any other waves were breaking, but he was in the way of this one and taken full in the back while in the act of casting.

Even now, Jim can’t say exactly what happened, but he knows he was smashed off his feet by an unexpected, unseen and unstoppable wall of water that carried him into the sea many yards away from a stance that we deemed safe as those proverbial houses. Jim described the impact of being slammed by a big wave as “like being hit by a speeding double-decker bus!” And he has the skid marks on his underpants to prove it!

Describing events Jim said, “I was just flattened by the force and power of it and emptied into the sea. The only thought in my head then was self preservation. It sounds mad, but in spite of the brain-numbing blast of shock from the freezing water, you instinctively know to grab hold of something, anything and hang on for dear life. Part of you automatically accepts that you have been leathered, and the deep survival instinct blots out everything else. Strangely, another part of you also calmly accepts that you are probably going to die. But even with several feet of water overhead denying you breath you know you’ve got a chance if you can anchor yourself. Thank God I managed to get a grip of that rock or I was a goner.”

If we are blessed with nine lives then I reckon Jim used up eight of his in one hit that morning. Someone somewhere must have been looking out for him. Given the depth, freezing water temperatures and powerful undertow which could be felt reeling in, if I had not been witness to Jim’s escapade I’d have laid odds of 10 to 1 against anyone emerging from that experience alive. He is without doubt a lucky, lucky man. 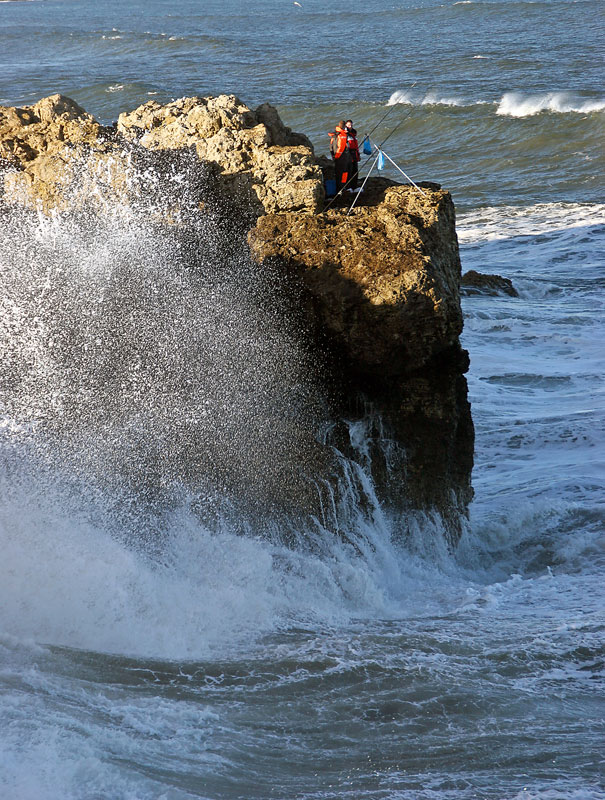 For my money hindsight is wonderful and humiliatingly awful at the same time. The way the rocks cut seawards meant we were fishing side-on to the sea, whereby our view of incoming waves and swells was largely obscured. Hindsight would suggest that this was a big mistake. Oddly, had the sea been more volatile, we would probably have been a little more vigilant in our choices with at least one set of eyes permanently trained on the sea for rogue rollers like the one that upended Jim in the bat of an eyelid.

You might have gathered from this account that neither Jim or I were wearing floatation suits or jackets. As a regular boat angler I own floatation gear but find it bulky and restrictive… that is no longer an issue. I don’t give a damn if it makes me feel trussed up like the Christmas bird, from now I’ll be wearing either a floatation jacket or even a crewsaver-style life jacket when fishing from the rocks.

If both Jim and I learned anything it’s that familiarity can breed contempt as much with rock marks as anything else. Just because we are familiar with the everyday ins and outs of rock angling on marks that we feel we know like the backs of our hands does not mean we are infallible. Years of rewarding rock fishing can lead to dangerous confidence in our surroundings and our actions in them. Long experience can in fact lead to misplaced belief in our own indestructibility. So be warned, beware and above all, let’s be more careful out there.