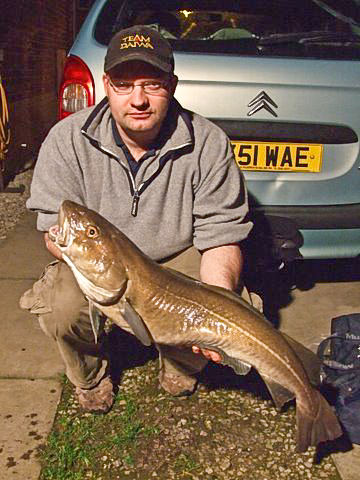 Chris Mack from Hull fished near Easington on Christmas Eve and was rewarded with a smashing 18lb cod. Another double-figure Lincolnshire cod came from the Tustville Holiday village area, and there is a good a better showing od decent cod all round.

Last week’s Humber Christmas match saw Dave Over with over 11lb of codling from the woods, near to the outfall.

There are rumours that Cromwell SAC may be reformed. It’s understood that Cleethorpes Angling Centre are interested in getting things going once more. There was great rivalry between Humber SAC and Cromwell SAC in the past and some fantastic inter club matches are the stuff of local legend. Both clubs produced some outstanding anglers some of which are still winning matches.

Reckitts SAC fished their league fixtures on the Yorkshire coast. John Windle took the Super league top spot with 4 cod and a whiting for 5.26kg. Chris Mack was second with 2 cod and 1 whiting for 4.89kg, including the biggest fish – a 3.20kg cod. Third was Carl Matthews 2.66kg. Mike Brockman was top in the Premier League with 4.90kg. Steve Jacobs was next with three cod for 3.79kg, with William Jacobs on 2.56kg in third.

Humber SAC Cod open takes place on Sunday December 28th on the Humber Bank wall; meeting at Tioxide pavilion at 14.30. At Skegness on the same day it is the S.P.A.C. rover from Gibraltar point to  to Mablethorpe.

There’s an open boat match on the 30th and all boat anglers are welcome.

The date for the MJ Wilson Humber Cod Championships is March 1st. Please could everyone be organised and get your tickets early as it make the organisers job a lot easier.

All the best for the New Year and thank for your continuing support.