Brighton fishing guide Robin Howard visits a mark on the river Arun to fish for flounders with a group of friends. He details the various rigs and baits required to cash in.

The River Arun runs from the chalk hills of the South Downs, through arable fields and the picturesque town of Arundel complete with its fairytale castle. It then moves on through muddied waters, rich with the soft silts of the lower river, until finally cutting into the English Channel at Littlehampton.

Fishing in the upper river is a loosely kept secret, with outsized sea trout, pike and carp being the quarry. The estuary is typical of many small river estuaries around our coasts: an ooze of thick mud and a haven for harbour ragworm, crabs, and the wading birds that feed upon them. In the warmer months, flounders are joined by large mullet and bass, but after the autumn floods a mainstay of flounders and eels remain. 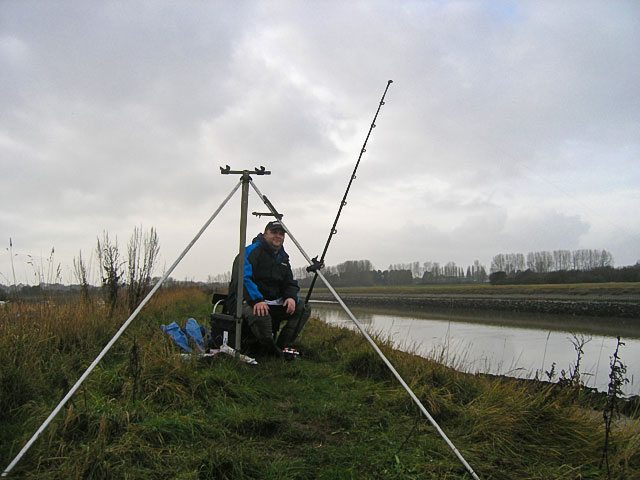 Five of us turned up to fish what might be described as a classic river flounder swim on still but grey but morning. An outfall pipe trickled fresh water on a bend which sweeps around and splays to widening mud bank. We all dropped along this feature. Tronix boss George Cunningham had come second in a local flounder competition the day before, and unashamedly made straight for the same lucky spot. George had some leftover harbour rag which kindly shared with the rest of us – harbours are essential if the fishing proves difficult. We also had some excellent king ragworm and small blow lug from Prime Angling in Worthing. Small blows tipped with harbours are deadly combination bait for Arun flounders.

The tide was just beginning to lift, and a variety of rigs were flicked out into the muddy water. George had opted for a Wessex rig, fishing three baits on 24in hook-lengths; Steve Smith used a simple running paternoster; Graham Poulter fished a running ledger; Gary Hazelgrove and I fished one up/one down rigs. I used long 36in snoods and size 6 Mustad silver Aberdeens, which are a very capable hook should a stray bass wander by. 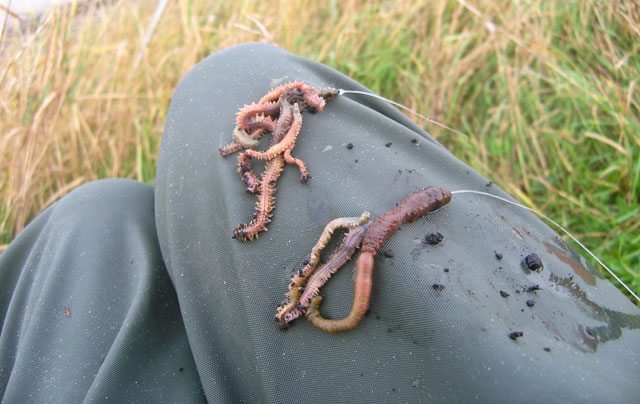 Unlike the previous three weeks, the wind was virtually non-existent and no rain fell. Rattles from crabs where soon interrupted by the first flounder for Steve Smith on harbour ragworm, followed by another of around 10ozs to also to harbours on my rod.

Minutes later, the unmistakeable pull of a feisty flounder towing upriver prompted me to lift my rod and wind in again. Another chunky little flounder that might have gone 10ozs flicked and kicked as it lifted it from the mud… a routine I would see repeated by others in the group.

I was using the session to try and decide which rod to use for similar fishing next year. Most of my fishing is for bass, either on low water surf beaches or in the chalk gullies that abound along the Sussex coast. Most of the fishing is ‘touch ledgering’ and done holding the rod. To that end I needed a rod that was light enough to be held all day with a sensitive tip. Much as bass are likely to pick up a bait and pull hard, their interest is often betrayed by just the lightest of rod tip tremblings, especially when free-lining squid. My particular rod requirements didn’t stop their however. I needed something capable of lobbing a live mackerel, with the middle steel to keep a decent bass’s head out of rough ground. My 2009 rod of choice – a Shakespeare Power Play – while excellent in many regards, had proven just a little too meek for my purposes. 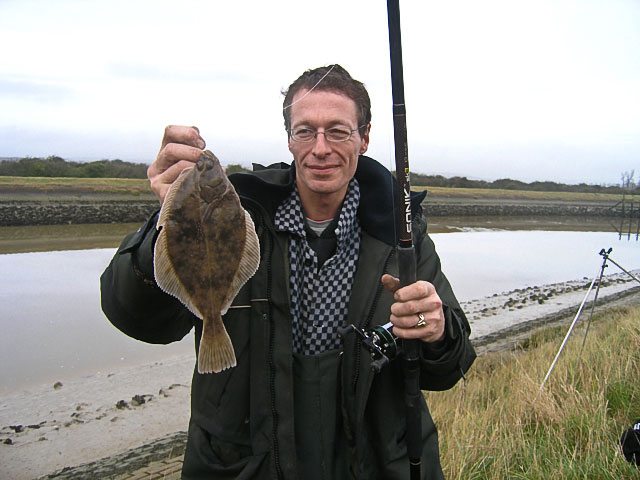 I’d waded through countless reviews of lauded bass rods, and flexed and fiddled with more yet without any really pressing my buttons… until I picked up and waggled the Sonik SK3 bass rod which is simply stunning for the money. At 12ft 6in it was the perfect length for keeping the line clear of weed-ridden wave crests when fishing at close range in wind driven swells. It was certainly light enough to hold all day; it had oodles of essential backbone and a tip with perfect sensitivity. The SK3 was living up to all my estuary expectations and will be the main bassing rod used by me and my clients in 2010.

The flounder action was not hectic. My end of the bank was suffering a definite lull. Gary on the other hand reeled in two flounders in quick succession from further down. As the water increased in height, tiny bootlace eels battered our baits, but generally bounced off. 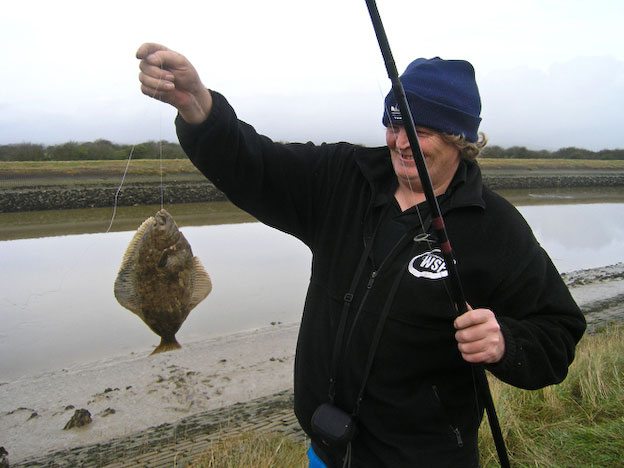 Steve’s simple approach found the better fish. His single hook ploy took four fish, all of which were comfortably over ½ a pound. George was astonished to find his successful tactics of 24 hours ago, failing to find any fish on this occasion. Gary managed modest two flounders, while George and Graham unfortunately blanked. I returned a total of four fish: two each on harbour rag and king rag.

One of Steve’s fish carried open sores, which is sadly regular sight flatfish around the UK. Such afflictions might be down to pollutants or parasitic manifestation and could perhaps be part of the reason for the recent large scale decline in flounder numbers around the coast. Whatever the speculation and sinister theories, I do remember those weeping sores on the Essex flounders I caught as a child when flounders were far more numerous. 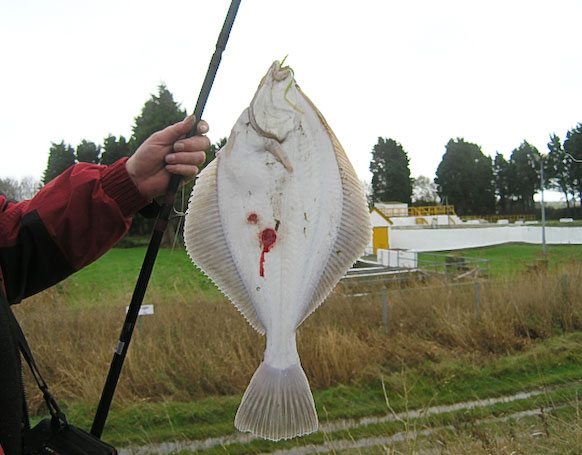 Flounder numbers have all but collapsed in certain parts of the country and they are developing something of a cult appeal. The attraction might be an age-related security thing: that characteristic pull of a flounder as you lift it from the bottom bringing back childhood memories of carefree days when flounder were always obliging. It certainly has little to do with them being good to eat – although some anglers who catch them from open beaches might beg to differ – and flounders don’t exactly score high points for sporting prowess either. One thing is for sure, if suffering aching muscles from repeatedly firing heavy leads into gale whipped seas, chasing shadows of winter cod then the relaxation of quiet day on the river offers a welcome respite.