Previously I looked at how Corrosion Block compound made by the Lear Chemical Corp in the USA, can help protect a brand new reel and hopefully save you some money in the long run. I said then that all reels will eventually succumb to neglect and saltwater weathering, the only differential being that better quality components generally take that bit longer to be adversely affected. A reel I was recently given to try and bring back to life proves this point admirably. 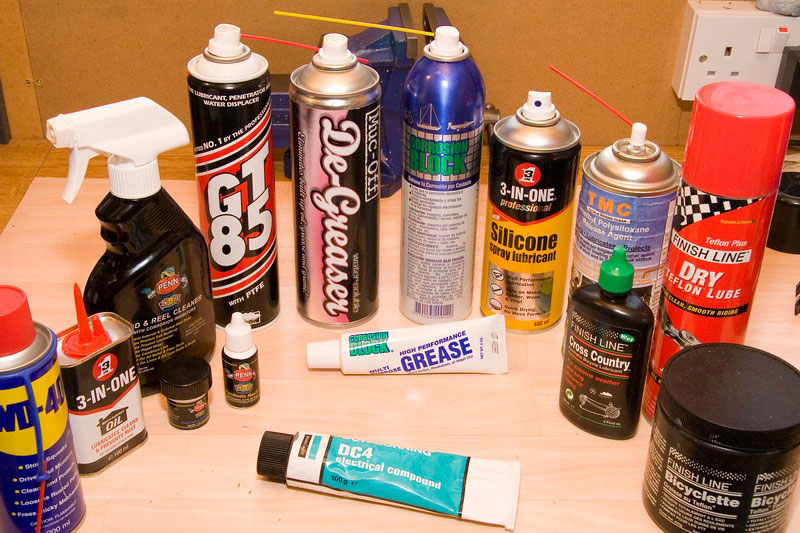 The Albacore is an expensive, quality big game reel made in Italy. At one time, they were marketed under license by Shakespeare in the UK, and many still doing the rounds are badged as such. This one had given the owner many hours of trouble free fishing, and before grinding to an abrupt halt, it had accounted for numerous rays, cod, conger and even a porbeagle shark. The handle was stiff to turn, and while the drag still seemed smooth, when I moved the drag lever to the free spool position the spool was anything but ‘free’ – in fact, you had to push it round with your hand! There were some external traces of corrosion and salt build up, but nothing too damning.

The Albacore is held together with hexagon socket head screws and a couple of these were a bit deformed where it looked like someone had had a go at getting the reel apart in the past with the wrong size key. The reel had certainly seen better days and the owner wanted, if such were possible, to return it to its former glory. This is normally possible given the availability of parts, but, as is often the case, it is not always cost effective. The only places I know to get the required parts are Alutecnos in Italy or through their agent in the USA, and that was sure to be very pricey. 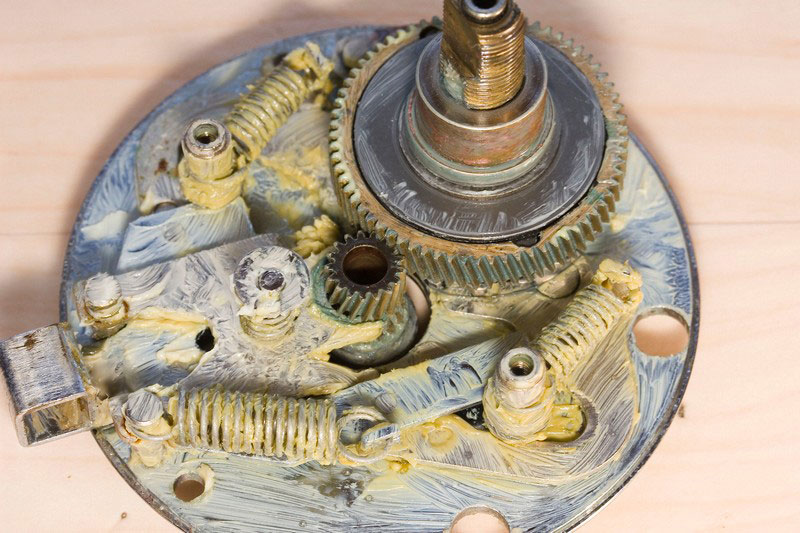 I have used various corrosion-busting products on reels over the years as the top picture shows. The best way to prevent corrosion is to stop saltwater ingress in the first place. To this end I’ve done long-term trials with neoprene reel covers and a home made ‘Rod Sock’. This combined with a good internal coating of waterproof mountain bike PTFE grease on reels’ internal mechanisms allowed my reels to be used continuously for two years, with only a quick wash off after each trip. They suffered no traces of corrosion or damage at all in that time.

These results were fine, but grease is thick and time consuming to apply and it doesn’t always get into all the gaps that saltwater can. This is where Lear Chemical’s Corrosion Block scores: it is easy to apply, by pump spray or aerosol and has fantastic ‘creep’ properties, meaning it seeks out all the nooks and crannies inside and outside a reel. This is just what’s needed apart from near the drag washers, but I’ll come to that later. Sprays aren’t any use for reel gears which instead get smeared with Corrosion Block EP rated grease. 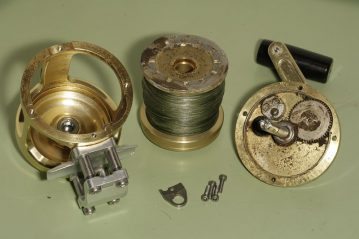 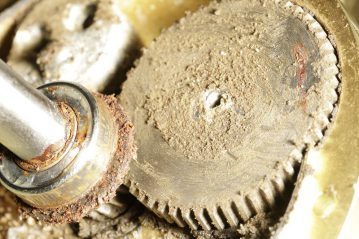 After downloading the reel schematic I removed the left-hand side plate – which is the drag end on the Alutecnos – and was amazed to find the innards in pristine conditions … there were even traces of clear grease under the spool bearing that probably went in at the factory.  The drag washer was a little worn but not in need of replacement, and was not contaminated at all. I replaced the sideplate temporarily and opened the reel from the handle side only to discover a hellish world of difference.

The internals were in a shocking state. There was no trace of grease anywhere, though there was a dry caked on coating that was probably grease once upon a time. One of the spool shaft bearings looked suspect, while the Belleville washers beneath were orange and furry with rust. Though outwardly corroded the bearing was still smooth, which left me puzzled as to why the spool was so stiff. I finally tracked the problem down to the non-functioning ratchet and some horrible corrosion to several components in that area. 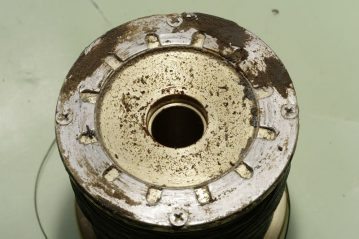 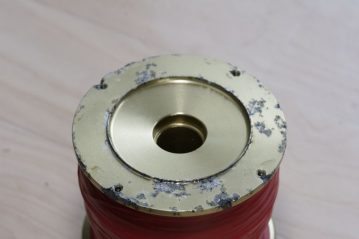 The corrosion was so bad that the ratchet plate had been buckled and lifted by the corrosion between the four countersunk retaining screws. The ratchet plate had been displaced by about 1.5mm, and was in contact with the main gear where ‘fossilised’ grease and salt had amalgamated into a nasty grinding paste. The corrosion and salt was cleaned away and the plate removed. This revealed that the spool had also become pitted and eaten away around the gear-side edge. At this stage I feared the worst and thought that the reel may be beyond economic repair but I relished the challenge.

I set about cleaning the whole reel to assess it properly. To clean reels (and any greasy mechanism) I use ‘Muc Off’ which is a mountain bike product. Just spray Muc Off on the mechanism, work it around with a brush then wash off with hot water. Always do this latter part in a bowl, in case any small parts that were hidden by the grease get free and go straight down the plug-hole. 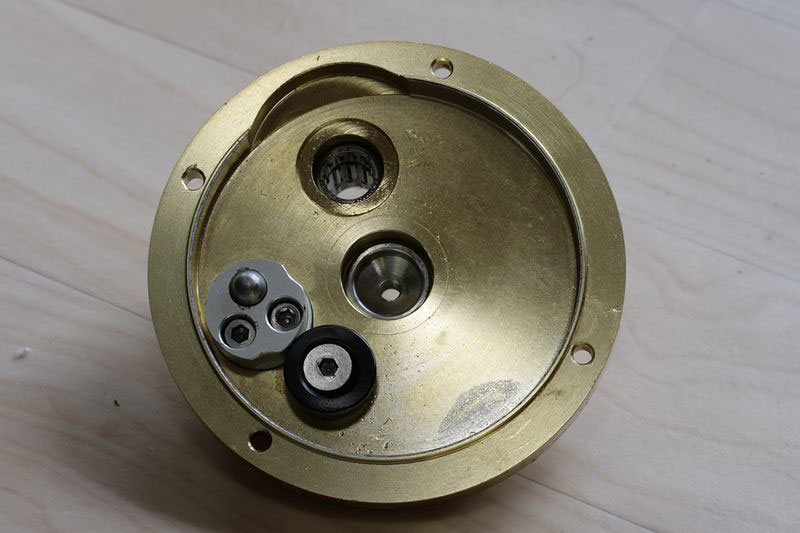 Miraculously, all the bearings were fine after being flushed out with lighter fluid and soaked in Reel-X oil. A bit of work with a fine abrasive pad and Autosol metal polish had the Belleville washers looking passable too. The gunked solid ratchet parts were released after a bit of careful attention, and a squirt of Corrosion Block (it also has good lubricating properties) had them all working perfectly. A coating of Corrosion Block was then applied to all the internal surfaces apart from the drag or the drag cover. I also carefully applied Corrosion Block to the roller bearing as these are often very exposed to salt. These bearings do not like being under or over lubricated – too little wears them out, while too much or too thick an application can lead to slipping. 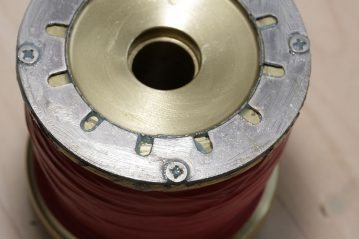 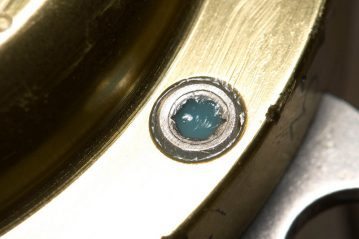 For the gears I used Corrosion Block grease so this only left the problem of the ratchet plate. The ratchet plate might have needed to be replaced, but I was still confident of getting it serviceable. The problem was solved by applying a coat of grease on the end of the spool, and turning the plate over and letting the screws pull it flat against the spool. The grease would hopefully stop any more saltwater ingress. A further smearing of grease over the top finished the sealing and ensured
the ratchet operated smoothly. After re-assembly each bolt head received a daub of grease. The reel looked handled like new and looked all the better for the full body make-over. 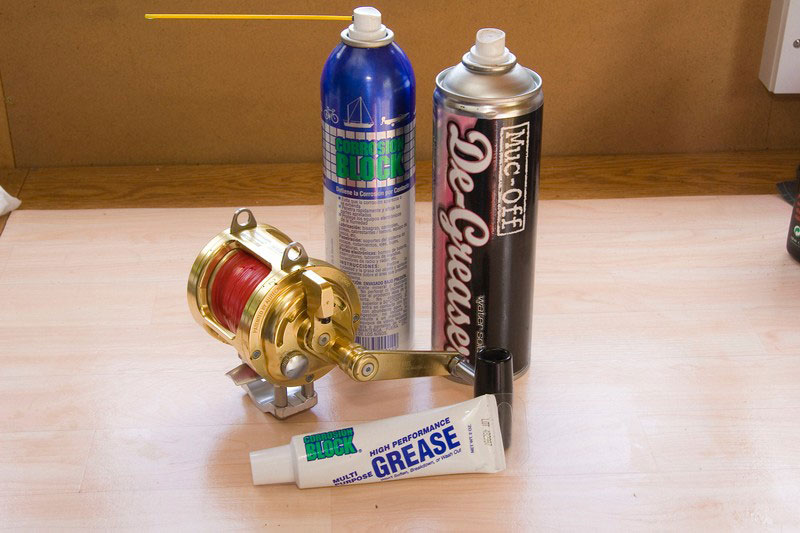 As I stress in the previous reel maintenance feature, store reels with modern drags with some pressure on the drag – around 25% of maximum – to prevent oil, water or in this case Corrosion Block from getting between the plates by capillary action when not in used. For more information on corrosion block go to www.corrosionblock.co.uk