In part two of PSF’s definitive guide to white ragworm Steve Souter explains how to keep this deadliest of sea angling baits. There are tips on how to set up a bait fridge, great advice on worm care and much more besides.

Getting hold of a regular supply of whites is the difficult bit. Thereafter, looking after them is straightforward with a little time and care. A bait fridge is essential to store and maintain peeler crabs, lugworm, red ragworm and of course our concern, white rag. Kept cold, whites become desirably lethargic within the confines of properly functioning fridge; thus keeping for long periods with minimal intervention. They require little interim care and are unquestionably one of the easiest baits to hold live. 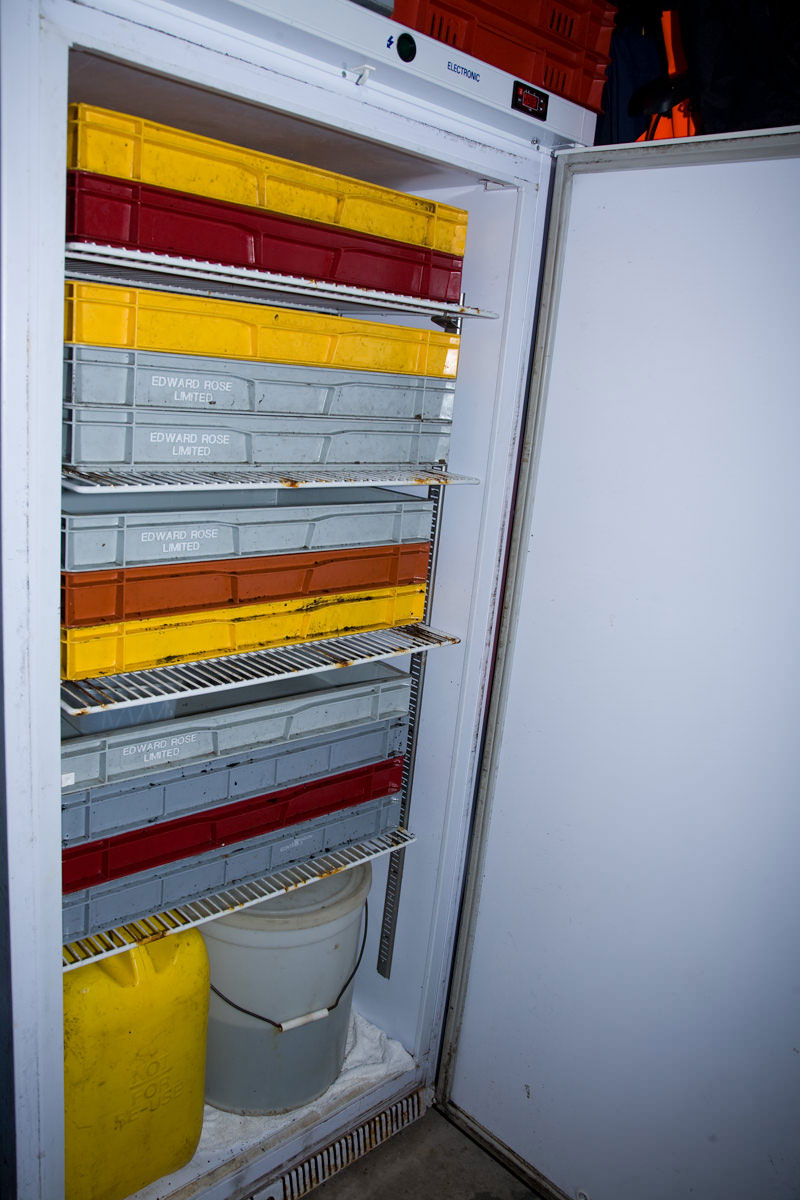 A bait fridge needn’t be anything more complicated than a second-hand domestic refrigerator. These can often be picked up ‘free to a good home’, or for little more than pennies through the classifieds in local newspapers. Here are some quick fridge tips to help you get started.

Whites can be kept simply in plain chilled seawater, but ideally some form of bedding material, helping mimic a mini environment within the fridge is best for prolonged retention. Several mediums, namely coral sand, sea coal, coarse sand and shale grit are used to good effect. Some are better than others, and I find sea coal gathered straight from my local beaches best of all.

With new sea coal, it’s essential to flush out all muck and dust particles which can kill worms. This is a brain-numbing but necessary procedure. Fill a large metal sieve with coal, and run through with cold tap water at a firm pressure until the water runs through completely clear… this can take 10 minutes.

Fine sea coal deposits along the normal high tide line are a feature of some beaches. Collecting enough might be easy or impossible depending on location. If coal isn’t an option then the coral sand sold in aquarium shops is the next best thing. Unlike coral sand, which displays a noticeable bacteria build-up similar to that of domestic fish tank after a few months use, sea coal has medicinal properties, which hold bacteria in check. I have continually reused coal for years without having to curb rising bacteria which eventually thrives in the equivalent coral sand and affects worms. 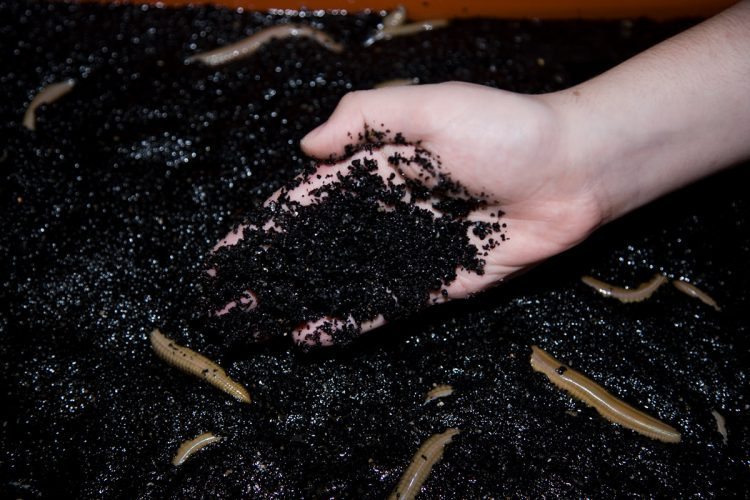 If you use coral sand and are not inclined to renew it after, say, six months, then at that stage it must be regularly cleansed by decanting it into a suitable pot and boiling in tap water until the putrid smell is nullified. If possible do this outdoors because it stinks to high heaven. After boiling, rinse through with cold tap water and drain completely. Next, flood to 10mm above the grit with fresh seawater, and refrigerate for at least four hours before re-housing worms.

Bedding grit serves several purposes. As long as a tray is not overcrowded worms will burrow into the grit, and a single large cat litter tray can accommodate as many as 40 good whites. Also, worms separated by grit are far less inclined to bite each other and damage is rare. And this gravel layer acts as something of a filter bed with worm excreta evident above the grit and therefore easily poured off when cleaning. A large cat litter tray requires a level 20 millimetres of git in the bottom.

Some Dos and Don’ts

Bedding grit must also be chilled to a comparable temperature to that of your fridged water. Worms are agitated by sudden rises in temperature and react by furiously bunching and uncoiling. I like to chill several standby trays containing coal and seawater ready for use at all times.

Like all marine worms, whites don’t like being handled. Cold worms in warm hands become frenzied, with violent contorting sometimes leading to worms breaking themselves. In their cold, comatose state whites are inactive and there is no need for air pump aeration. Indeed, aeration can prompt blistering along the worms’ backs, leading to leakage and tank contamination. Occasionally, odd worms tanked for a very long period will develop the same leprous-looking sores. Any unhealthy worms should be removed immediately to prevent fouling the rest of the stock. 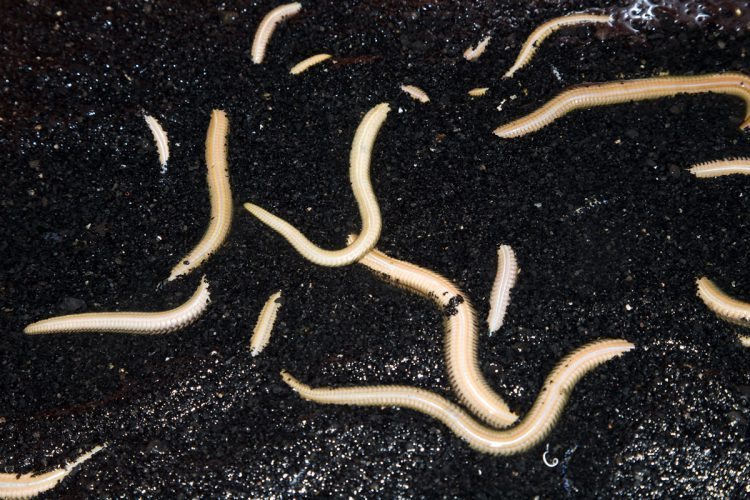 For maximum efficiency, normally aerated bait like red rag, and non-aerated baits such as whites, should be held in separate fridges. Before putting freshly dug worms to bed, grade them into factions of comparable sizes. This simple procedure helps minimise blemishing caused by biting. Grant worms plenty space. Overcrowding is bait’s surest guarantee of a short shelf life.

Whites are aggressively cannibalistic and possess a retractable bulb-like mouth, which is often displayed during feeding, or when they become distressed by light, high water temperature, sudden atmospheric pressure changes, low salinity and any small effluent level. In bigger worms this bulb can be almost an inch long. Large worms will readily feed on their smaller brethren, while modest worms can damage others by biting them. If large snakes and small whites are pitched in together, it won’t be long before the smaller ones start to disappear. Despite their innocuous appearance, white rag can give a painful nip, or more accurately, a sore suck. As anyone who has experienced one clamped viperously to the tender skin between their fingers will testify.

Exactly how often water requires changing will depend on the time of year and how good your fridge is. Whites are especially agitated by rises in air and water temperature. Worms excrete more waste in summer when the air temperature is higher, and they become irritable. Susceptibility to sudden changes in air pressure, such as those experienced during thunderstorms can require additional monitoring.

Cleaning your trays can be done in two ways. Simplified cleaning amounts to nothing more than gently pouring off the old water, and replacing with fresh, previously chilled seawater. Full cleaning is harder work. First decant a tray of worms into a spare tray. Pour off the old water and remove all further waste mater by flushing soiled bedding material through thoroughly. Simply use tap water, but continually agitate the grit to displace spoil matter before draining to avoid freshwater dilution. 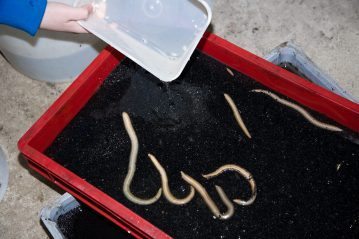 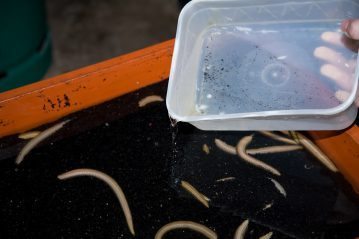 Worms will quickly acclimatise to fridge conditions but still require regular refreshing. Providing the fridge is reliable and can maintain a steady temperature of around 2 degrees, a water change once every 14 days is the summer norm. Infrequent attention is called for in winter, with every 3 – 4 weeks about average.

Be especially careful of where replenishing seawater is collected. Fill up well away from streams and small rivers, as freshwater is a killer. Avoid taking water from shallow rock pools if there has been recent heavy rain. Whites are far less tolerant of polluted water than lug or red rag, and even a small degree of ‘invisible’ pollution can kill precious whites stone dead. If in any doubt, put a single white in the new water and observe. If the poor thing starts looping the loop then the water is either too warm or it’s contaminated with freshwater or effluent. Always chill enough additional seawater to cater for emergencies.

Don’t lump freshly dug worms into trays already containing older worms. Store freshly dug bait separately. This way bait can be rotated and used in date order. The simplest way of doing this is to utilise different coloured trays. For example, worms dug in March could go into, say, red trays, and those dug the following month, into whatever other colour takes your fancy. 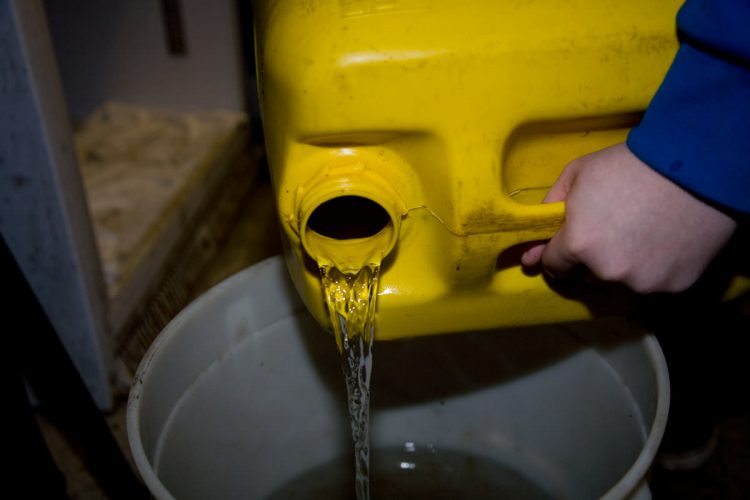 Q – How long can whites be kept alive in the fridge?

A – More or less indefinitely, provided they are looked after. I have kept large snake whites in prime condition for 15 months, and could have retained them for longer had they not been required for use.

Q – Are the catching qualities of whites diminished by a long period of tank retention?

A – I would argue only slightly, and then only after an excessive time. The larger species of whites don’t suffer from ‘washout’ like tanked lug for example. As long as the worm is in good physical condition the period that it’s been fridged for is of no consequence. Remember any whites are better than no whites, and there are thousands of anglers who would sell their soul for just a regular handful. 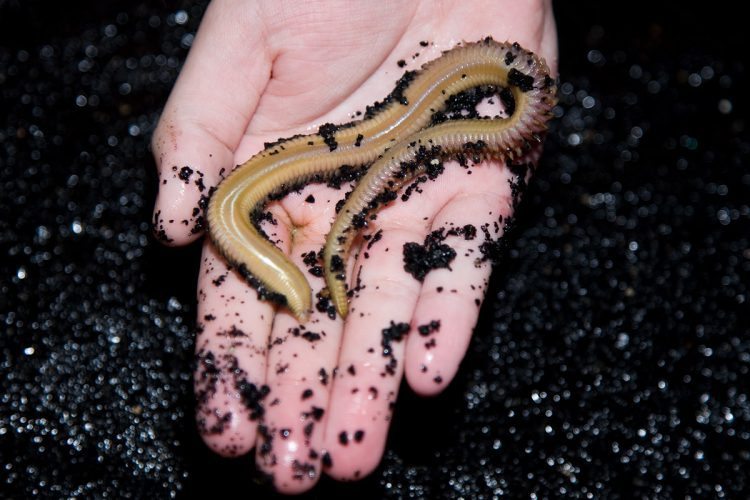 Q – While digging white rag I came across two flat worms about four inches long. Any ideas what they were and are they any use as bait?

A – These were most probably one of several species of marine flatworm present in some areas below the normal low water line. They are very fragile and inclined to break when handled, and therefore very difficult to present on a hook.

Q – What do whites feed on while held in refrigerated trays?

A – Whites will generally take what they need from the seawater, and worms will keep well for months with just this for sustenance. But that is not to say that feeding is out of the question. Large whites will keenly devour small whites and harbour ragworm. Put half a dozen tiddlers in with a tank of big snakes and they’ll mysteriously vanish… right down the neck of the big fellas! I have also used various domestic fish foods but they quickly dirty the tank.