Bread is THE mullet bait, but Channel Islands’ rumour has it that a bit of loaf clobbers bream too. Steve Souter is on the case.

Daylight was just about breaking as we parked off-road. Alderney shore guide and island tackle dealer Mark Harding, led visiting angler Alex McDonald and I over fields and crackling electric fences to follow the narrowest of rabbit-runs down to the cliff edge at Cachliere. If not for a witchingly warm early morning wind and lack of heavy cod kit, the Alderney location could have passed for chunk of the Aberdeenshire coast better known to me. However, even through a veil of half-light, experienced eyes would be drawn to subtle differences in the landscape and brush blanket. 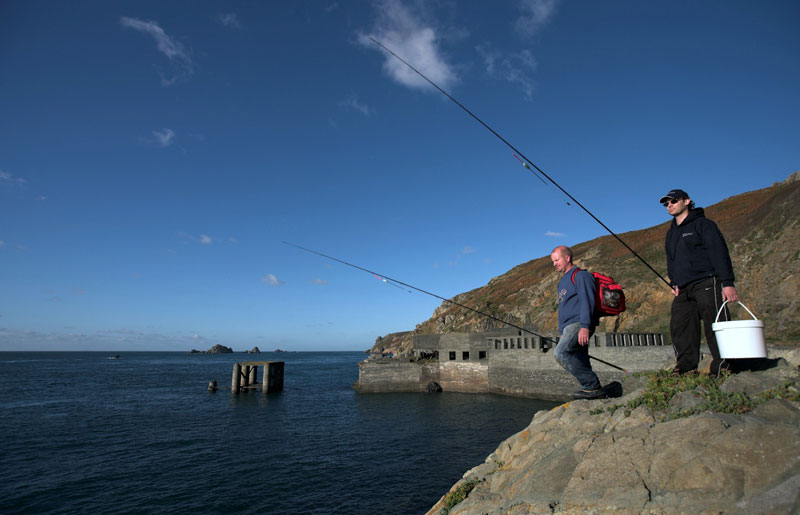 Ferns and wickedly thorny gorse slapped and clawed at calves and ankles as we picked our way on. Laboured breathing didn’t end where the path stopped, as we still had to scramble over a steep and slippery rim of rock to the water’s edge. This proved no serious hardship and was somewhat gentler on the nerves than expected.

The hot mark resided a short distance beyond the skeletally derelict structure of Cachliere pier. A cramped solitary rock poked proud of the sea, and provided space for only two anglers to fish comfortably. I was on camera duty for this one and wedged myself in a dry gash in the main cliff, leaving Alex and Mark to fish out on what would soon become an island as the flooding tide cut in around it.

While there was still an excellent chance of mullet at Cachlierre, the intention was to target and catch black bream. Ragworm, squid and fish are the frontrunner baits for bream, but Mark had deliberately neglected to pack any of these. His mission was to prove to a couple of sceptics that it is more than possible to pull bream on the mullet’s favourite scoff … bread. 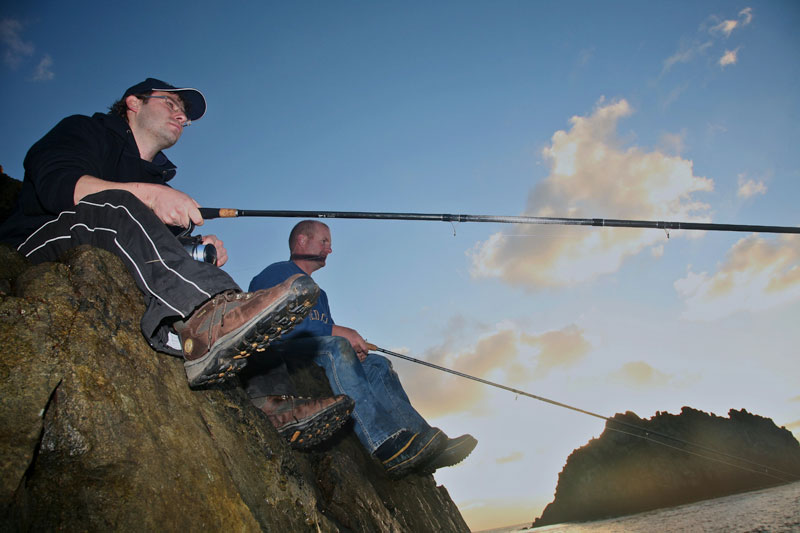 “Simple bread flake will turn the heads of plenty bream as long as the fish are in the general area”, Mark assured us. Now I know what you’re thinking because I wasn’t convinced either, but over the next few hours I would be converted.

Core tackle was a heavy freshwater float rod and small fixed spool reel filled with 6 lb mono. The rig consisted of an adjustable float cocked with some bulked split shot and run on the main line down to a swivel; then 4 ft of 6 lb fluorocarbon to a size 8 hook.

Groundbait, or shirvy, as the Channel Islanders call it, is an essential part of the float and bread method. Mark’s bream shirvy was a mixture of coarse breadcrumb, minced fish, a little water and pilchard oil mashed together and carried in sealed bucket. The consistency of the shirvy is important: it should be stiff rather than sloppy. 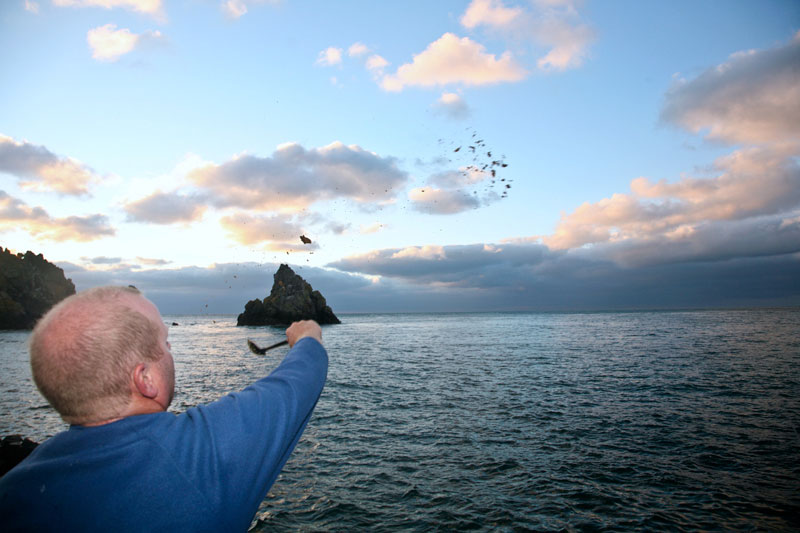 Mark quickly spooned in several generous dollops of shirvy. A 50p piece-size bit of flake was then torn from a slice of fresh bread, folded around the hook, and squeezed around the knot to hold it securely in place. I made the mistake of thinking it would take a while for fish to home in on the shirvy trail. 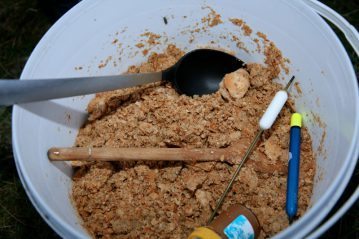 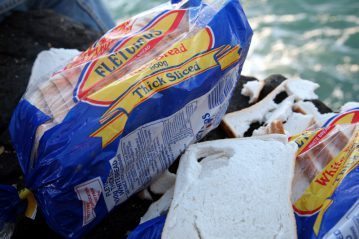 Alex McDonald, who works on the well-known Sakuma brand of sea angling products, was bent into a punchy bream before I could wrestle out the camera. 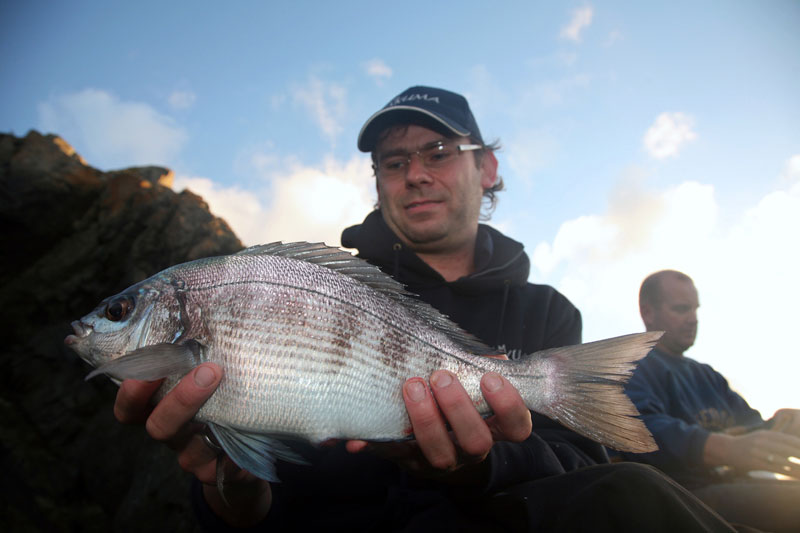 Alex who is more at home rooting out specimen sized rays and gilthead bream from the estuaries and rock marks around his own South Hams area, had it all his own way in the next couple of hours, landing and releasing a mullet, a pair of garfish, a ballan wrasse, and two further bream. All of these fish hammered into the bread. 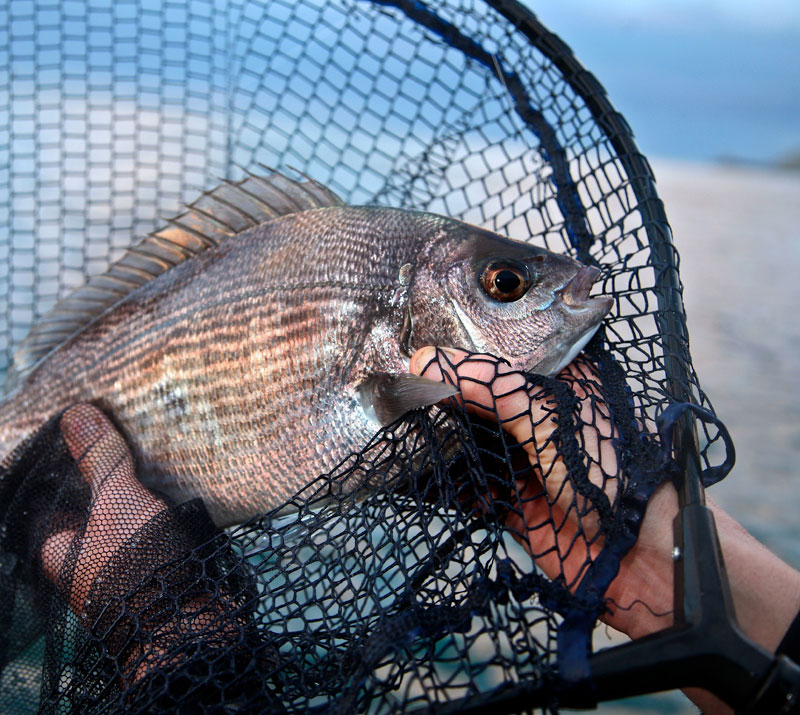 Working to the little and often mantra, Mark kept a constant trickle of shirvy going in. As a pro shore guide his number one objective was to ensure that his charge got among the fish… at least that was his corporate line. And of course, the constant distraction of a mobile phone permanently jammed between his shoulder and lughole had nothing at all to do with the string of missed takes that Mark suffered! 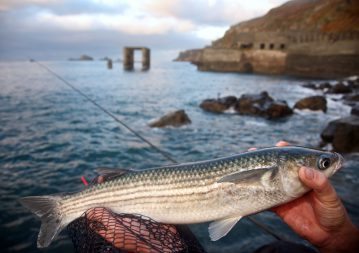 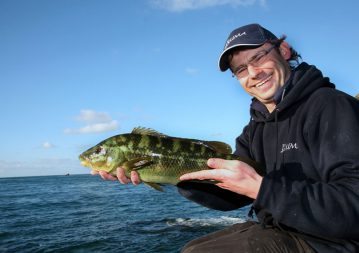 With bites drying up and the flood tide threatening to maroon the lads on the rock for several hours, it was decision time. Getting back over was touch and go. Mark and Alex vaulted the rapidly filling gulley with not a minute time to spare.

Cachliere pier was on the way back and we spent a fishless hour there before Mark suggested we pack up and move. After clawing our way back up to the car, a short 10-minute drive took us to Slides, which is a lovely mark overlooked by ruined Houmet Herbe fort, and an un-testing five-minute saunter from the car. 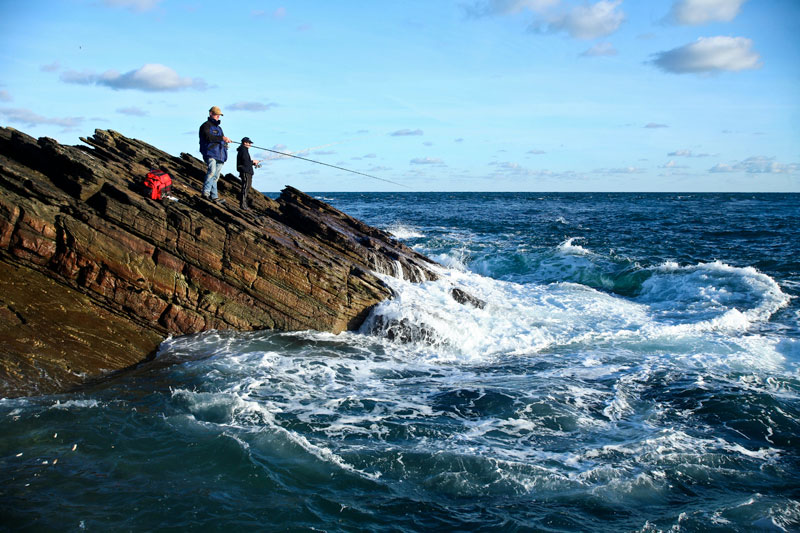 Seaward sloping plates of rocks cut down to gullies and bays that promised fish. With the shirvy lumped in, the lads again dunked their floats and bread baits. Within a few minutes there were pesky garfish topping in the shirvy slick and jumping clean over the floats. Sure enough, the first fish landed were gars. In an effort to fend the ‘snipe’ off, the bread baits were set deeper yet.

Mark struck as his float disappeared and suffered unprintable abuse for the resulting little blenny. Alex also suffered a blenny blip before Mark got down to proper business and weighed in with a couple of 2 lb bream. More bream followed, by which time I was fully convinced this bread malarkey was no fluke. 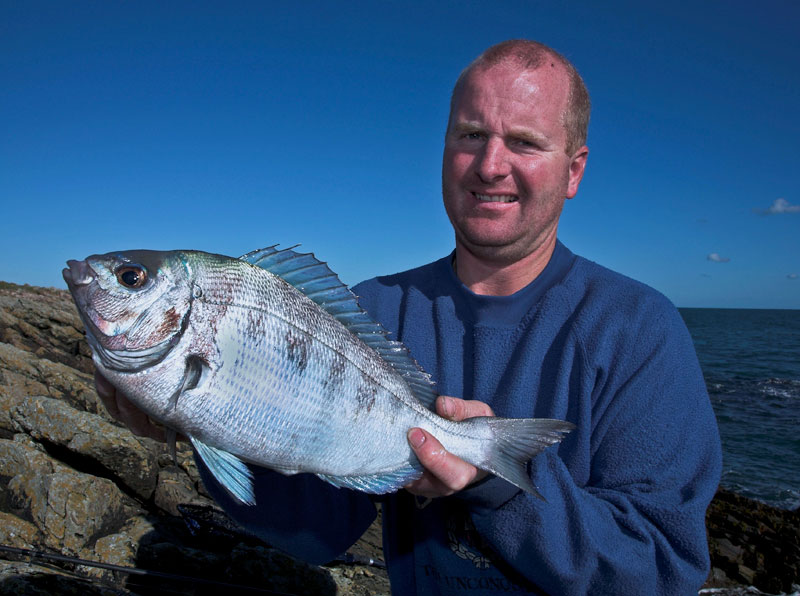 July to the end of October brackets the main shore bream run when the simple bread and float method can be superb and great fun. Mark told me that the Alderney bream normally switch to bottom feeding later in the year, and can be caught on standard shore gear well into December. 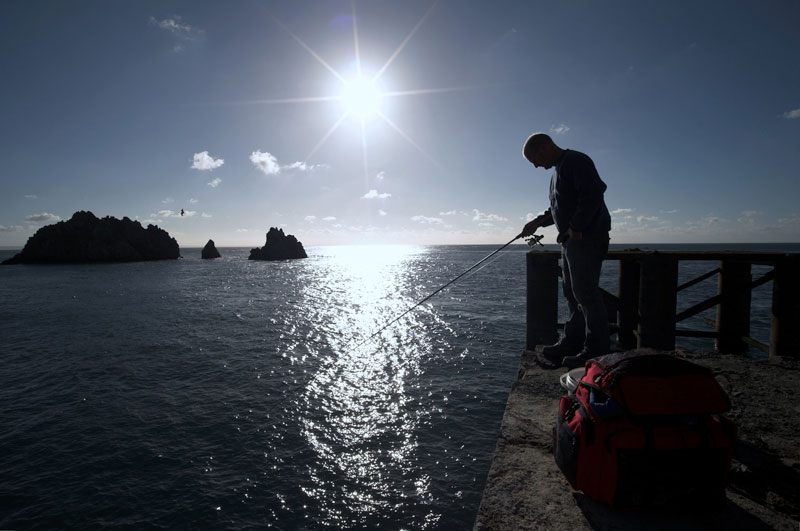 Details Alderney flights can be obtained from Aurigny

Professional shore guide Mark Harding also runs Alderney angling with his partner Fieona Cosheril. Mark is a mine of up-to-the-minute local catch information and can be contacted for shore bookings on 01481 824884. Alternatively check out his website 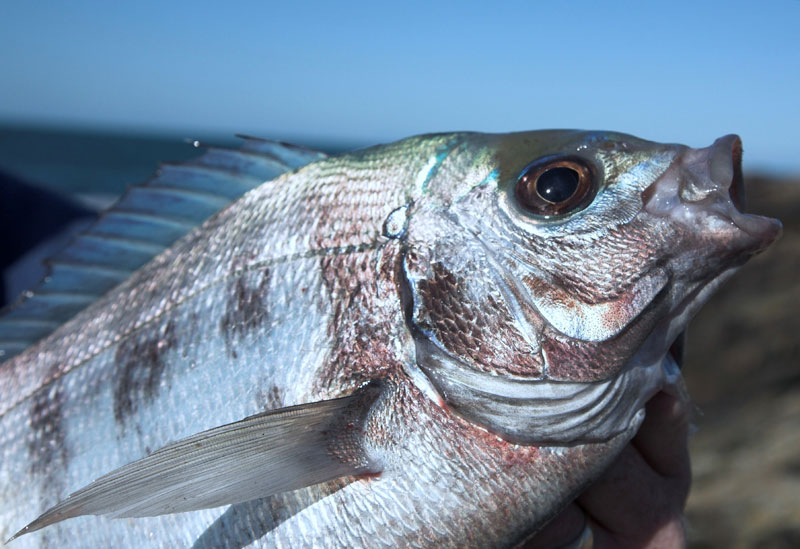 Accommodation and masses of other essential island information can obtained from Visit Alderney.