A slack day on the common skate led Davy Holt and his mates to try a deep water reef last weekend, and it came up trumps!

The target was a ling or two so down went fillets of mackerel on 8/0 Owner circle hooks. After about ten minutes of holding station in the tide, Ted Paszynski, a visitor from London, tightened into a decent fish it fought well to start with then pretty much gave up. As a result I was expecting a decent ling to show but was a tad surprised when a good conger appeared, it weighed in a 34lb 10oz and was then returned alive.

Ted then dropped another two fish before fellow Londoner Dave Langan had a solid take. The fish started going mental with dives of over 50 feet so the crew aboard Davy’s boat Catchalot were thinking that a smallish common skate had snaffled the bait.

Dave plodded away with it, slowly making ground on the fish and after about 15 minutes the snake like shape of a conger could be seen in the depths and what a conger it was. The skipper slid the gaff in the bottom jaw and lifted it onboard one go and the crew knew they had something special, it pulled the scales round to just over 64lb.

As they were not too far away from Loch Aline they made a run for it to weigh the fish on dry land, constantly pouring fresh salt water through it’s gills. On the shore its weight was confirmed at 64lb exactly, smashing the existing Scottish boat record of 48lb. The eel was revived and released to fight another day at the side of the pier. 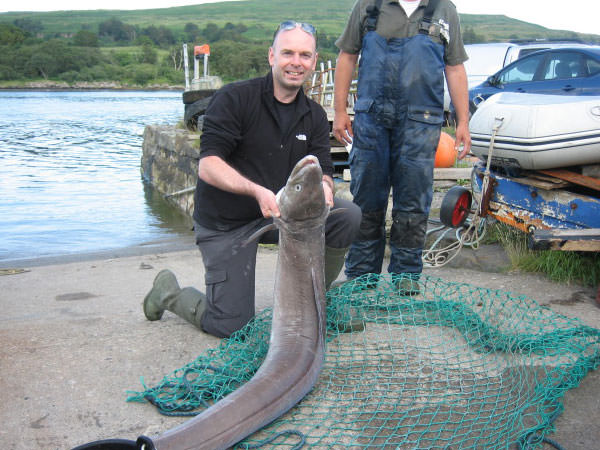