Squid is recognised as a great bait for a wide range of species around the UK coast, but it’s only recently that Steve Walker has got his head round it.

Squid, cuttlefish, and octopus are Cephalopods, which means ‘head footed’. They all have well developed heads with large eyes and beak-like jaws, and the larger species of octopus are known to be very intelligent animals. Most are associated with clean sandy or muddy ground and there are more species around the UK coast than most people would believe. 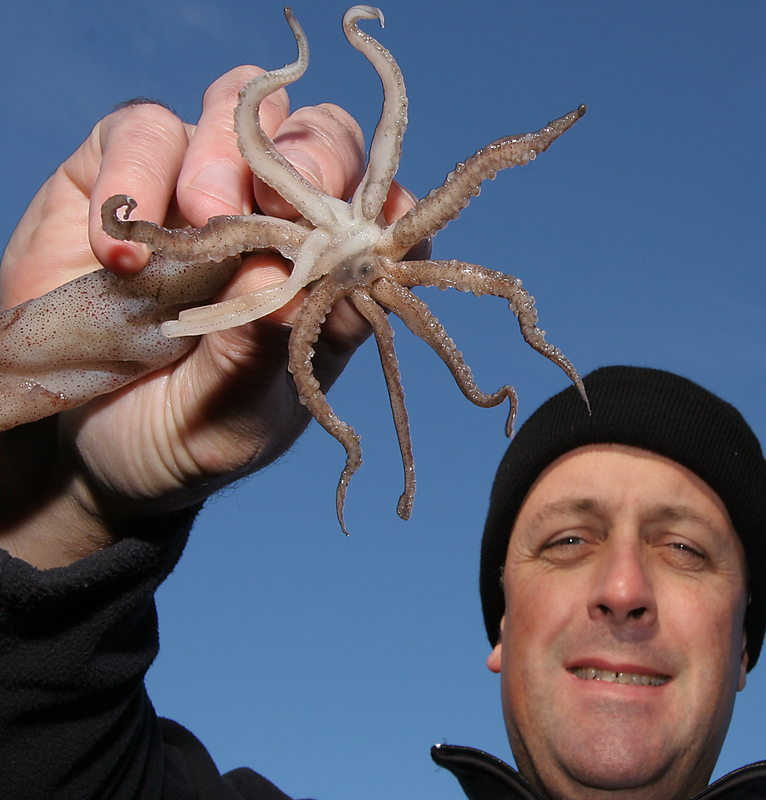 There is the Common Squid (Loligo vulgaris), which grows to around 50cm long; the Long Finned Squid (Loligo forbesii) grows to around 90cm long; the Little Squid(Alloteuthis media) which struggles to grow above 20cm long, and many others such as the Lesser Flying Squid, the Broadtail Shortfin Squid, the Dwarf Bobtail, and the Common Bobtail. There is the Elegant Cuttlefish, the Pink and common Cuttlefishes, and the Common and Curled Octopuses. Sweet names for creatures that are vicious predators. There are plenty of them out there, and they are a reliable food source for many of the bigger fish predators.

Anglers are most familiar with Calamari squid bought over the counter frozen in typically 1lb and 5lb boxes. Calamari means squid in Italian, and the term is applied to squid of various species cleaned and intended for human consumption. Regardless of the specific species, squid is an excellent and often under-rated bait in some parts of the country from shore and boat. It is of course recognised as a great bait for bigger cod and bass particularly along the south coast of England, but it is a bait with so much more potential. In truth it is only in recent years that squid has become more popular among shore anglers, due mainly to its availability from supermarkets stocking more exotic food stuffs. You only have to look at the seafood counter in your local supermarket to see the vast array of seafood now available, ranging from oriental prawns, to obscure bream species from the Mediterranean and beyond. There are also several internet companies that can supply these relatively obscure items as fresh and frozen baits in bulk quantities. 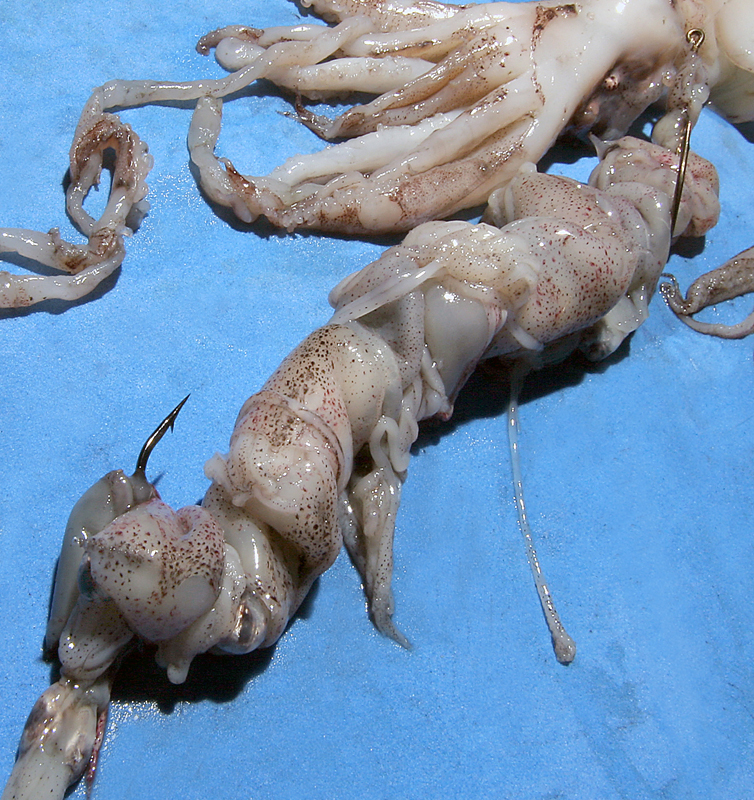 Occasionally, during the winter months large shoals of smaller squid are present off the North East coast where I live, along with sprat shoals. When this happens the winter cod and whiting feed on little else, and it usually takes a good heavy sea to disperse them and bring the cod inshore looking for other food sources. It stands to reason then, that at this time squid would be an obvious bait choice, but surprising few anglers, certainly in the English North East, use it.

I’ll confess that is only in the last few years that I have started to use squid. My squid uptake had little to do with targeting the big cod that whole squid has a reputation for tempting, but was due to the increasing dominance of winter whiting along my local shoreline. I am not going to use good quality worm or crab baits on whiting when I can just use the minimum amount of ragworm or lugworm and bulk out with squid. If whiting are the only species to be expected then there’s little choice other than to actively fish for them. However, cod and other species will also eagerly take a squid cocktail with worm, razor, clam, mussel, or mackerel. The trick is to play safe when indulging smaller species and choose a strong hook pattern that will hold anything bigger that happens along. The Kamasan B940 is a good general-purpose hook that’ll handle bigger fish, but there are numerous capable hook patterns across the Kamasan, Mustad, Varivas, Sakuma, VMC and Gamakatsu ranges in particular.

My local tackle shop sells frozen small baby squid generally known as ‘party squid’. These are usually offered in 1lb packs containing between 40 – 60 mini baits. Supermarket squid, or squid bought from the fishmonger tends to be a bit bigger than the boxed calamari sold in tackle shops, and although these can also be used whole for bigger species, they are more normally cut into smaller baits. The tentacles, or parts of them, can be used to tip off worm baits. 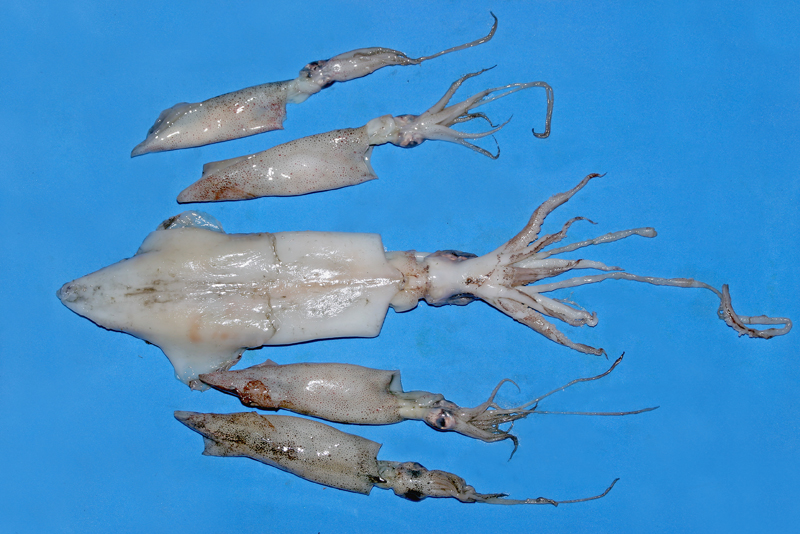 Big whole squid baits are also a noted bait for conger eel, and various ray species in some parts of the country. From April onwards squid strip is a renowned bait for voracious black bream from both boat and shore, while ragworm paired with a long thin strip cut from a larger squid is hard to top for plaice. The larger truth is that there are few fish that will not readily accept squid. 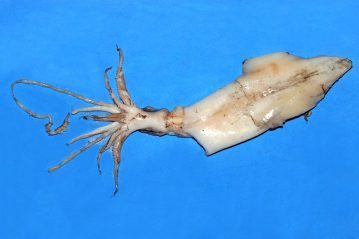 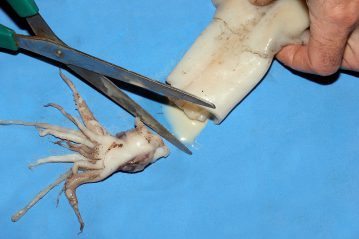 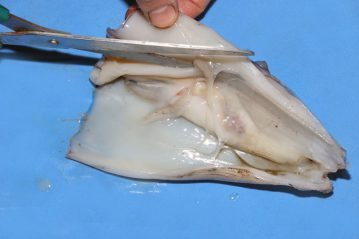 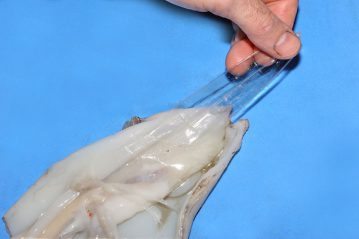 I have had some success with floatfished squid strip and larger tentacles whilst fishing for pollack from rock marks during summer. The squid tentacle, being tough, is just hooked once through the thicker end and it moves very attractively in tide. A strip around four or five inches long cut from the body also works well. 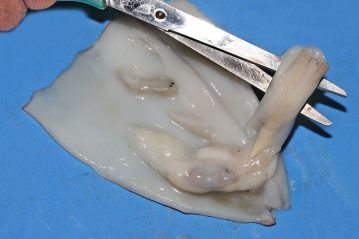 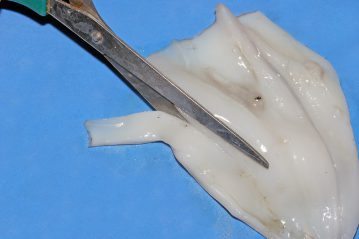 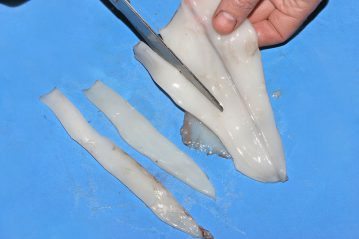 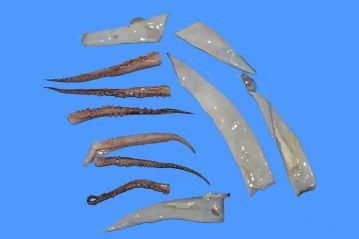 While there are a few situations where the likes of dabs will take an old smelly squid bait, it is usually essential that they are fresh, or at least freshly frozen. In my experience it is a waste of time re-freezing squid, and I discard any unused ones after fishing and buy fresh for next time. Supermarkets and fishmongers also sell larger fresh squid on ice ready to use, which can be used straight of or frozen down for later use. 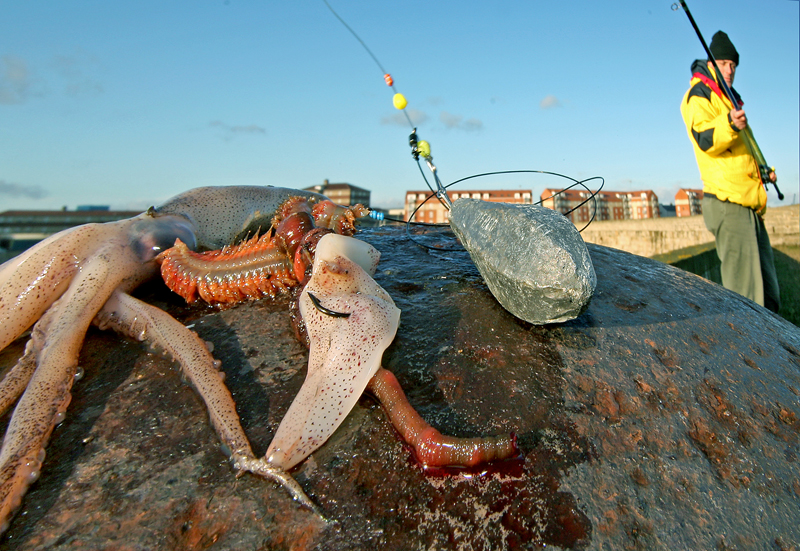 If possible try to obtain unwashed squid directly from the fish market as these tend to hold the natural flavours and juices which the fish find attractive. Large squid can be caught on rod and line and the boats from Weymouth regularly run “quiddle” trips, as they are known locally, during Autumn evenings where the anglers jig for the squid.