Despite being widely available commercially and easy to collect in many areas, mussel is a neglected bait. This fleshy mollusc has wide ranging species appeal from both boat and shore, and if there is any bait that doesn’t receive the plaudits it deserves, then it’s the common mussel. Mytilus edulis – the humble everyday mussel to you and me – clings to rocks and manmade structures like pier legs and harbour walls via adhesive strands called byssus threads which sprout beard-like from the front middle of the shell. Secretions from the Byssal gland located behind the dark-coloured mussel tongue form these bristly threads, which quickly harden on exposure to seawater.  Nutrient-rich ecosystems within some of the Scottish Firths and many smaller UK estuaries sustain vast colonies of mussels, which form expansive beds. Rockier shorelines affording a good degree of shelter, and places where numerous large boulders stand proud amidst mud and coarse shale, can also provide ideal mussel habitats. 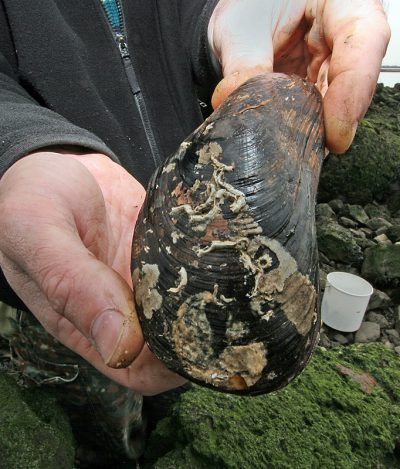 A close up of a large mussel

The common mussel should not be confused with the much larger Horse mussel (Modiolus modiolus), which inhabits deep water and is often cast ashore during scouring onshore storms.  A delectable and high protein food item they may be, but mussels ingest high concentrations of bacteria, which are harmful to humans. My advice is not to eat any self-gathered shellfish, but especially mussels. I vividly remember my old biology teacher detailing how these filter feeding bi-valves thrive in the vicinity of sewage outfalls, glutting on the vile organic foulness that man in his wisdom saw fit to pump into the sea untreated. Since then I‘ve never eaten a mussel, but my personal distaste hasn’t deterred me from using many thousands as bait for codling, wrasse and haddock to name a few eager species. Ironically, one of my favourite mussel marks is an isolated area of rocks surrounding a now obsolete raw sewage outfall. Mussels of varying sizes adhere to the rocks, but some of the fleshiest specimens are found in dense clusters on the ground.

Available at short notice from the supermarket or fishmonger, mussels are one of the easiest and most convenient baits to acquire. Although still harvested ‘wild’ in some places, most of those now commercially available come from recognised mussel farms. When referring to the quality of their product, mussel farmers talk in terms of ‘meat yield’, which is the amount of flesh present within the shell. Cultured mussels usually display an excellent meat yield. But in regions where mussel is abundant, it makes sense to gather your own. 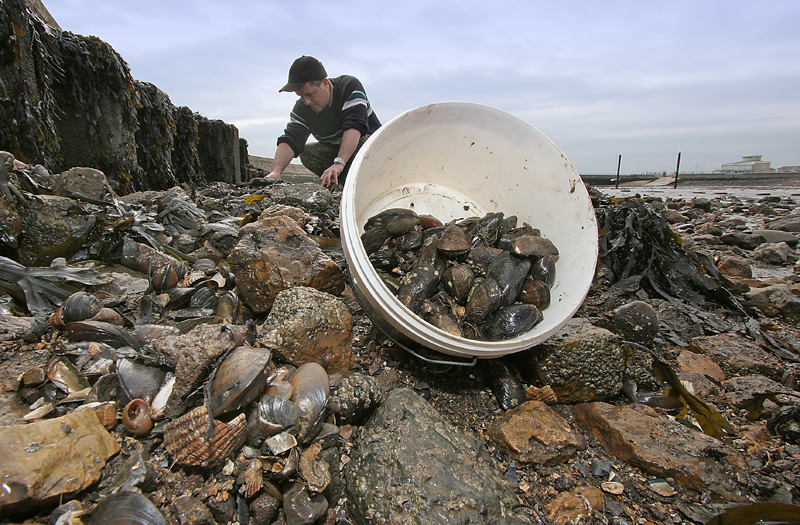 Provided you find a good area, picking enough for your own needs takes very little time. Mussels are often encrusted with sharp barnacles and prolonged picking can result in painful scrapes and cuts. For this reason, and given the likelihood of multitudinous bacteria around many of the better picking areas, it’s prudent to wear a fairly robust pair of rubber gloves. Wellies or waders to keep your feet dry, and a suitable bucket or sack in which to carry the mussels are only other requirements. To wrest mussels from their rocks simply grasp the shell, twist to break the threads, and pull off.

When picking or buying mussel, it doesn’t always go that the biggest shells harbour the best mussels. Indeed some of these more mature molluscs display a poorer meat yield than that of a younger mussel. In my experience some of the most succulent mussels are actually to be found nose down, half-buried in the damp sand or mud. Generally speaking, average-sized mussels are usually available on medium and even small neap tides, while colonies of bigger mussels are normally only revealed on spring tides. Notable exceptions are some of the deep-sided Scottish sea lochs, many of which give up excellent large mussels even on dull tides. Mussels are hermaphrodite reproducers, discharging their eggs and sperm into the sea during spring, which is the poorest time to pick them. Spent mussels are decidedly watery, and after the winter cod have dried up, I don’t usually bother collecting them regularly again until mid May. 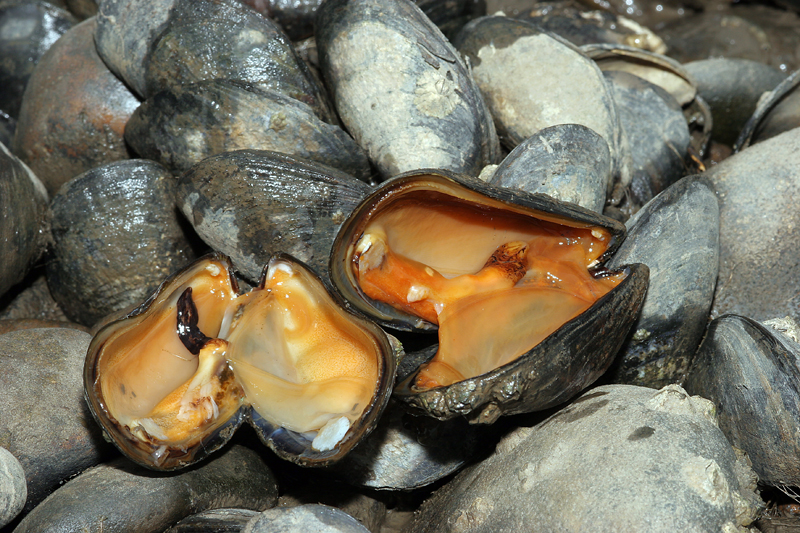 Kept refrigerated and provided they are given a regular ‘drink’ of cool, fresh seawater, mussel stay in good condition for about a week in summer. There is no need to refrigerate them in winter. Covered with a damp towel, storage in a cool dark place keeps them in good condition, again for roughly a week. Any mussels that are starting to open are dying, and should be discarded.

One means of ensuring good bait regardless of the size if tide is to fill a large onion bag with mussels and stash it out of sight in a convenient but discreet rock pool. Mussels will stay alive like this indefinitely. A secret cache of mussels can be broken into during an emergency, and it’s a good means of forward planning, if, for whatever reasons, you are unable to get out on the better tides. Gathering mussels is the easy part, removing the animal from the shell, preferably intact, is harder work.

Like most things in fishing, mussel shelling is simple with the aid of the correct implement. Forget arrow-headed, oyster-type knifes, as most have thick inflexible blades, which excel at bursting the edge of the shell, often leading to a nasty cut. A blunt butter knife with a slightly flexible blade, or custom short-bladed mussel knifes are the best shelling implements. Never ever use a filleting knife to shell mussels – it’s incredible how often I see lunatic anglers courting serious injury by attacking mussels with these. You can fashion your own mussel tool by grinding back an old butter or table knife to around 55mm. Using a grinder or file, round off the stub and slightly chamfer approximately 2mm around the blade to produce a shallow edge, which slips easily into the shell. There is no need for your shelling knife to be sharp. Shelling takes a little practice but it’s straightforward once you’ve acquired the knack. If your shelling technique is a bit dubious to begin with, don’t fret because a chewed mussel will catch well enough. To make life easier, some anglers force their mussels to open by momentarily blanching them in boiling water. This is not a practice that I would recommend, as I believe the end result is an inferior bait. 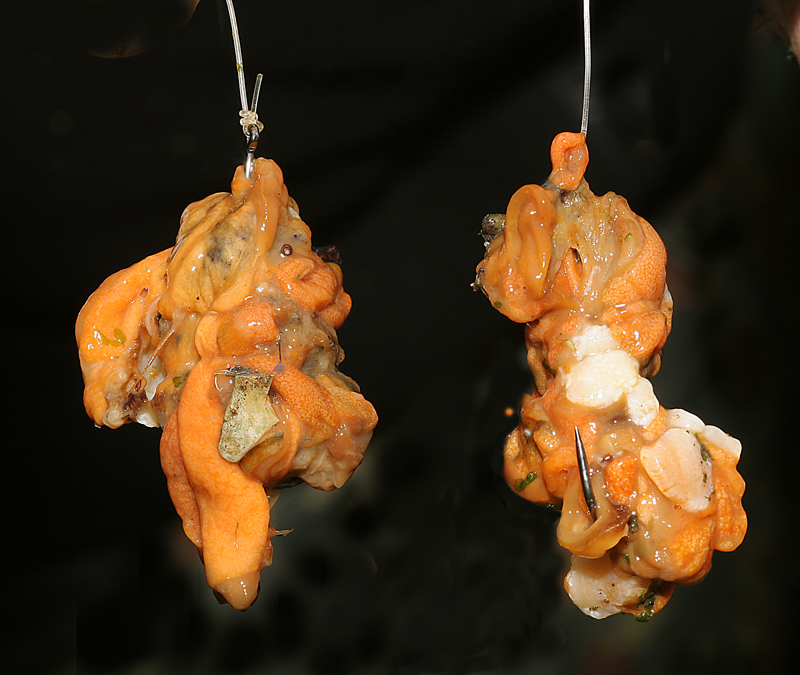 Mussels can be shelled at the shore, or on the boat immediately prior to fishing. I prefer being a bit more organised and normally shell the required number 24 hours before fishing. These are then placed in the fridge in a colander sitting inside a tub to catch the water. There’s lots of nonsense preached about the virtues of mussels left soaking in their own ‘juice’. I lean heavily in favour of mussels that have had their water drawn off. And water is exactly what this fluid is, not some magical fish aphrodisiac. Drained mussels also have the advantage of being easier to handle.  Fresh, frozen, or ripening, mussels ooze pungent scent.

Frozen mussels don’t take up much space in the freezer and are arguably as good as fresh ones. Mussel can actually be frozen still in the shell, but my preference is to do the work before committing to the freezer. For freezing, drain the shelled mussels in a colander, before transferring to suitably sized poly-grip bags, taking care to squeeze out all excess air. I bag them in quantities of twenty for shore fishing, and fifties for boat fishing.

Salted mussels make decent bait too. Salting the likes of mussels and cockles has gone out of fashion in recent years, but salted shellfish can catch plenty of fish. Properly salted mussels take on a rubberised constitution making them tough bait. To salt a quantity of mussels, drip-drain the mussels in the colander before placing them in a salt-lined ice cream tub or tray. Coarse sea salt is best but ordinary table salt does the job perfectly well. Swish them around briskly in the salt, before sprinkling a further covering of salt on top, and repeating the process. Having ensured that the mussels are fully salted, take a medium sized pasta sauce jar that will accommodate 20 or so mussels. Pour 15mm of salt into the bottom and dunk the mussels in on top. Trickle in very modest amount of the drained mussel water, before adding a further 15mm of salt and closing the jar. The water won’t dissolve all of the salt, just enough to form a thick saline solution. It is important to leave a slight gap at the top of the jar, so it can be regularly inverted to allow the fluid to permeate through the bait.

Mussel is perhaps at its best when cocktailed with other baits. Crab/ mussel is excellent for codling, wrasse, and coalfish from rocky shore marks, while lug/mussel is a widely used shore and boat combination for cod. Rag/mussel works for a wide variety of species including cod, wrasse and coalfish. Other responsive species include haddock, plaice, dab, wolf fish and pout. I have witnessed mussels dyed with food colorants and doused in flavourings, taking cod. Red and green are favourite colours, but given the choice, I’d plump for an un-doctored mussel every time.

Holding soft mussel flesh on the hook is a recognised problem. Many years ago anglers used rain-purged sheep’s wool removed from farm fences to secure baits in place for casting. Today however, the fine shearing elastic sold in most tackle shops, is the preference of most anglers. Alternatively, I often use non-elastic white cotton thread, which is less inclined to bite deeply, damaging the mussel. Avoid the thicker rope-like elastic, which does more damage than good. For downtide boat fishing binding mussels to the hook is optional rather than essential, as no forceful casting is involved. 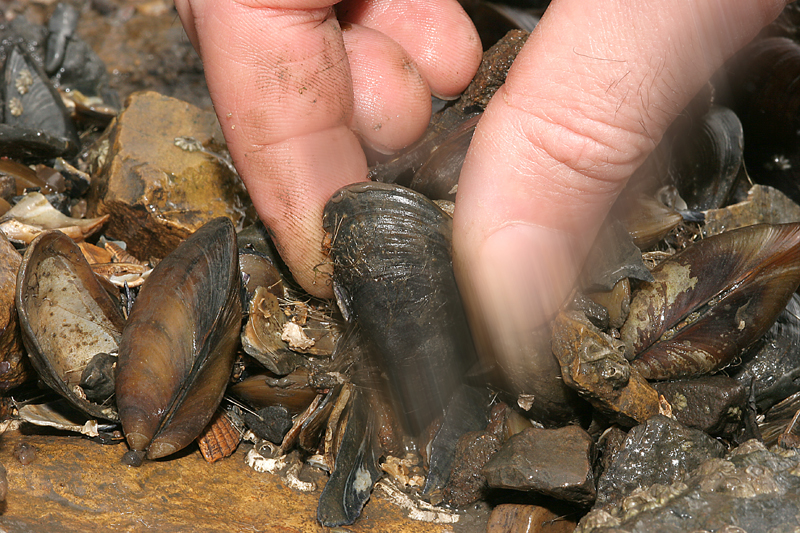 A mussel attached by its threads

There are also a couple of time saving ‘sausage’ techniques, which bind the mussels before they are worked onto the hook. Scandinavian anglers utilise a short piece of tapered aluminium pipe. A compressed length of fine elasticated bandage is pushed over the narrow end, with a short piece allowed to hang down loosely. Mussels are then fed down through the uncovered end, and eased out into the bandage to form something resembling a sausage. I have got to confess though, that I think this method mummifies the bait, and I have encountered problems with cod becoming unstuck because the binding has caught in their teeth.

Mussels bound back-to-back on a baiting needle can be similarly cut into sections of the required size. The largely rugged north east of England, the eastern Irish coastline, and Scotland are locations where mussels are routinely used to excellent effect. But effectiveness isn’t confined to rough ground or areas where the shellfish is plentiful. Mussel can also score over mud, mixed bottoms and clear sand. From a boat fishing perspective, open ground haddock respond very well to mussel, as do dabs and plaice in some areas.

Might as well face it, I’m addicted to dogs