No matter what level of quality of a reel attains sooner or later some problems will occur, even with regular maintenance. Here Des Westmore strips a Shimano Tyrnos 10 to fix a couple of regular problems which crop up as a result of frequent usage in a saltwater environment.   Although this article relates to the Tyrnos the problems featured also affect reels from other manufacturers.

The Shimano Tyrnos is a reel which has been the subject many queries in the past so I was very pleased when I was given a Tyrnos 10 to service. All the queries have concerned one aspect of the Tyrnos; the noise it generates when reeling in and if there any way of making it quieter.  The owner of this reel made a similar request and while sadly there is no cure, it wasn’t the main reason he gave me the reel.  The true problem with his reel was that the handle had become so stiff to turn it had rendered the reel unusable. 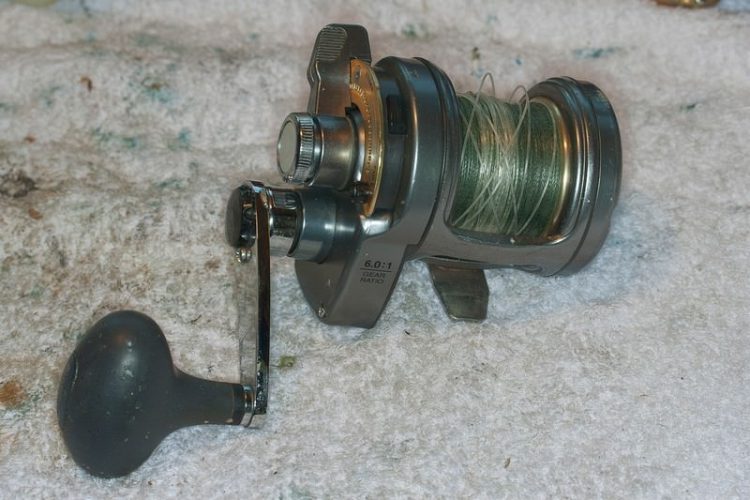 At a glance, it was obvious that the reel had seen plenty of use though it was far from beaten about.  However the owner was certainly correct about the stiff handle which while not totally seized, was not far from it.  I suspected the pinion gear bearing, always a weak point in the Shimano TLD; a reel that the Tyrnos is very similar to.  Later, with the reel apart I would be proven right on this point but meanwhile as freespool performance still seemed pretty good, my initial thoughts were that the spool bearings were ok.  On this point, I would later be proven very wrong. 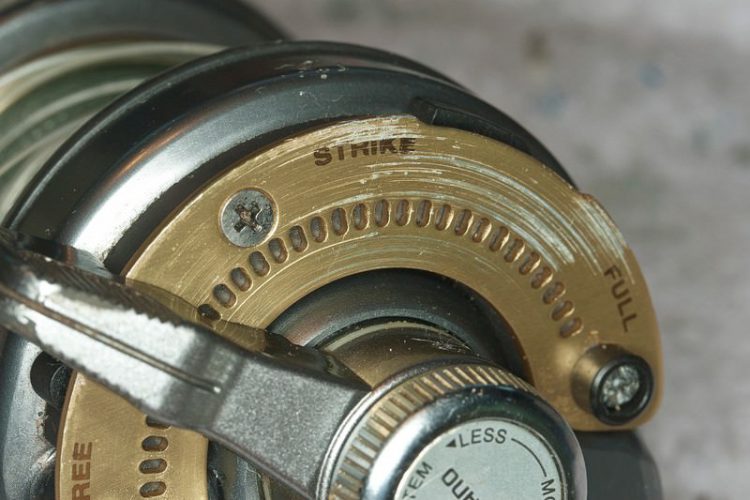 Getting the Tyrnos apart is not difficult though a little long-winded because there are quite a few screws to undo to get inside the right-hand sideplate.  This is due to the fact that while the Tyrnos appears to have a metal sideplate, in reality it is plastic clad with a thin aluminium cover which has to be removed first. 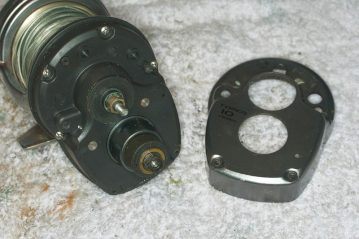 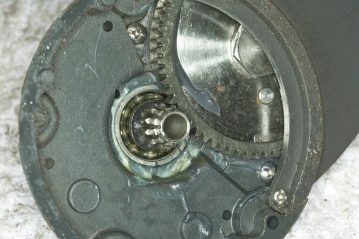 With the sideplate off, I could get a look at the pinion bearing, which sits in the centre of the sideplate supporting and locating the pinion gear.  Outwardly, things didn’t look too bad as there was no sign of corrosion to see and there was grease on and around the bearing.  I thought at this stage I may be wrong, but pulling the bearing gave visibility of plenty of internal rusting and when I tried to spin the race, it was totally seized.  The pinion gear had actually been rotating inside the inner race, as if it was a bush but luckily the presence of the aforementioned grease had prevented any major damage to the gear.  The rest of the drive-train looked in good condition and while I will return to this to show why this reel cannot be made significantly quieter in use, for now we will look at the drag and the spool. 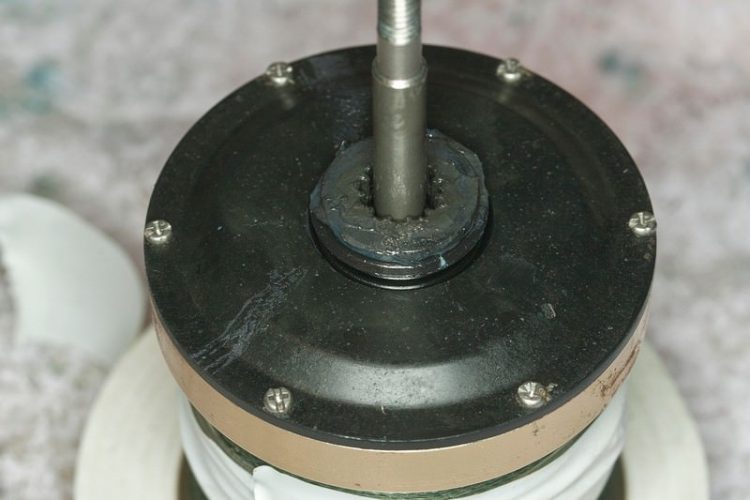 The drag on the Tyrnos appears well-sealed as it features a cover, secured by six tiny screws around the spool rim, as well as a seal in the centre which locates against the pinion gear when assembled.  With the six fiddly screws out, the cover was removed, exposing the drag plate located in the spool.  All looked well until this plate was taken out, exposing a brown, rust encrusted bearing located within it.  The well-sealed appearances are obviously deceptive. This bearing was totally frozen and again acting like a bush for the spool spindle to run in.  Taking a quick peek inside the spool, it was obvious that the right hand spool bearing had suffered a similar fate.  How much more wrong could I have been about the spool bearings?  I was amazed at how free the spool still ran.  This reel had been given to me in its box which carried some blurb about “Anti-Rust Bearings”.  You can make your own mind up on this point as I think for me to say anything would just be cheap point-scoring. 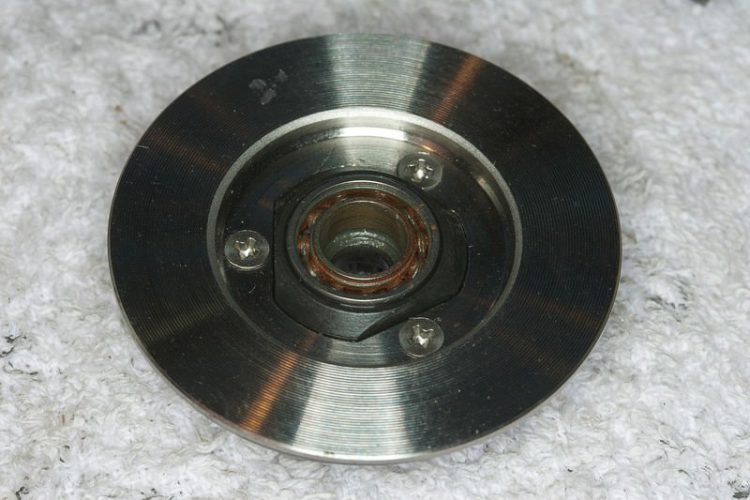 The drag washer, which looked some kind of loose-weave carbon fibre, appeared serviceable though a bit delicate so I decided not to disturb it.  Removing the spool shaft, which on the Tyrnos is accomplished from the left hand end, revealed a bearing and a set of Belleville washers all retained by a C-clip.  These all looked in perfect condition so at least the saltwater had not got that far. 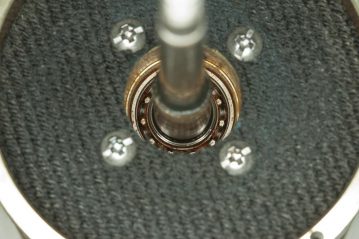 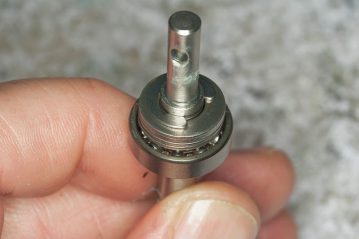 With the spool out, I could see inside the left hand sideplate which contains nothing but the line-out ratchet mechanism.  There was next to no signs of saltwater intrusion here and everything was fine.  In all honesty, the same can be said of the rest of the reel which on the whole, was remarkably salt-free which made the bearing failures quite alarming.  I think, as is the case in a number of lever drag reels, salt water had got in via the drag preset dial, or perhaps the drag lever itself, and tracked up the spool shaft.  Once in, it doesn’t come out and just sits there and does its damage.  Careful greasing up of all components upon reassembly usually goes a very long way to stopping this happening along with some careful treatment of the bearings themselves, but more of that later.  For now I will return to why the Tyrnos can be such a “noise machine”. 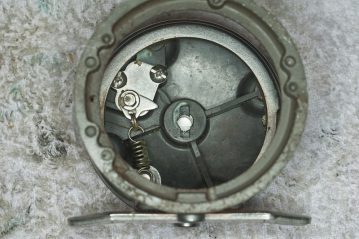 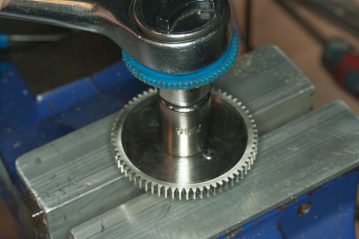 If you pull out the main gear and the handle shaft you will see that the Tyrnos features a double-dog anti-reverse system.   This is super-strong, super-reliable but also unfortunately, super-noisy.  While our American cousins don’t seem to mind this trait, it doesn’t seem to go down so well with us Brits.  Some generous lubrication with heavy grease can dull the sound a bit but that is about all that can be done.  You have to either put up with the sound, knowing that the chances of the mechanism ever letting you down are very slim, or just not buy the reel in the first place if it is going to bother you. The owner of this reel won it in a competition so had never had to make that choice but did say it was the only thing he didn’t like about the reel.  It is worth noting at this point that to get the reel back together, as the ratchet is hidden under the main gear you have to remove the main gear from the handle shaft and assemble the shaft, the ratchet and the double-dogs before re-attaching the main gear.  The important thing to know is that the screw which secures the handle shaft to the gear has a left-hand thread. 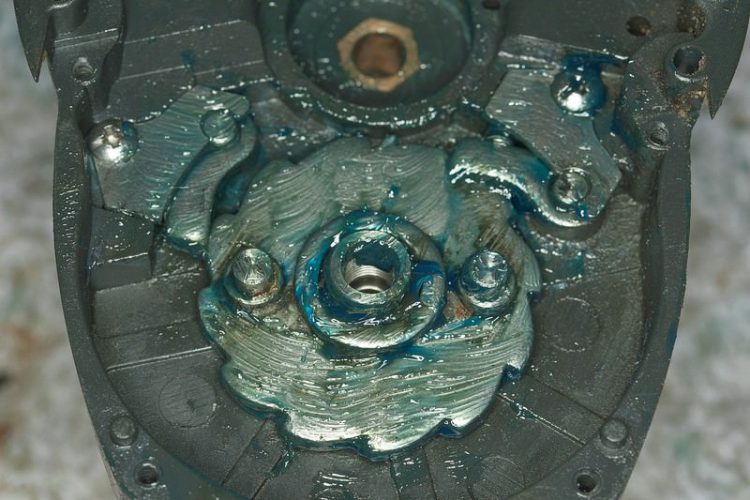 Returning to the bearing problems, the authorised Shimano service centre “Felindre” supplied the new bearings but did warn me that while they would fit, they weren’t the actual AR-B bearings that were fitted at the factory.  Given the original bearing’s performance in use, I didn’t see this as any great loss.  While the original bearings were all open the new ones were shielded. 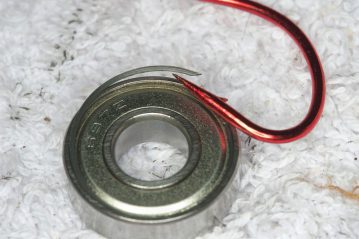 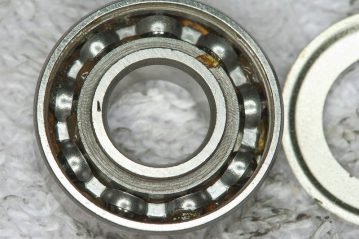 The shields were retained by spring clips which could be removed with a sharp fish hook.  With the shields removed, it was plain to see that the bearings were very far from packed with grease, meaning plenty of space for saltwater to get into.  For the pinion bearing, I packed the bearing fully with grease, and then re-assembled the shields. 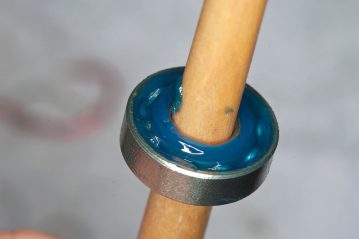 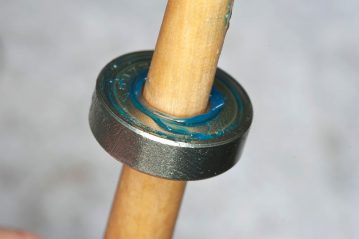 I did a similar procedure with the spool bearings but in this case, after degreasing, used a heavyweight, synthetic oil that is fully water proof and sold for use on mountain bikes.  This procedure has yielded good longevity for spool bearings with lever drag reels.  It does make the spool a little slower but that is generally not a problem.  Before final assembly the only remaining procedure was to give the drag washer a coat of Cal’s drag grease.  As always with lever drag reels, coat the washer then wipe of the, working the grease well into the washer at the same time. 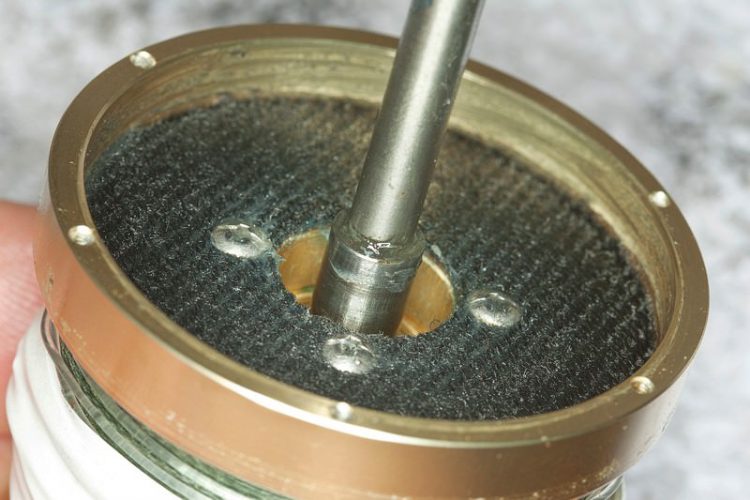 I own the Tyrnos 12 2-speed and they are definitely good performers.  A couple of hour’s work when servicing, hopefully results in reel that is reliable, even if a tad noisy.