How to rig up for common skate

Big powerful common skate will terminally expose any weakness in tackle. Terminal tackle in particular needs to be strong, and rig design well considered. But what is the best rig? Boat angler Les McBride has numerous massive commons under his belt and reveals the rig that works for him and many other dedicated skate hunters. 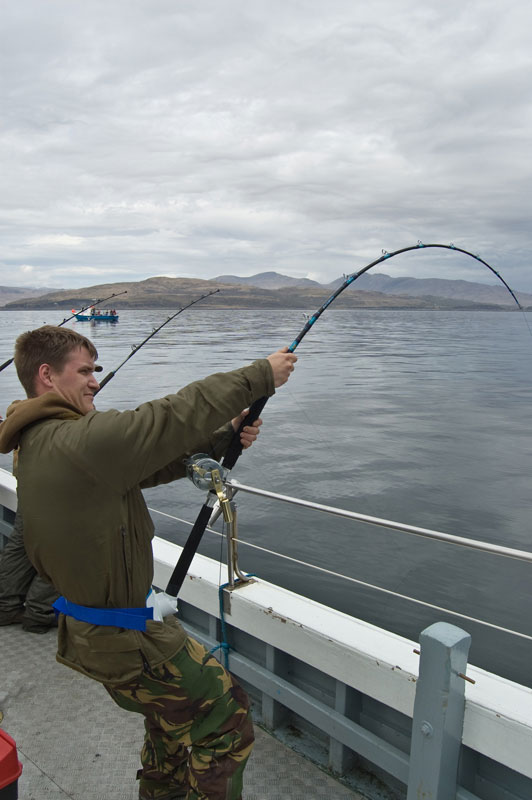 Imagine a fish almost eight feet long with sharp, crushing teeth at one end, and row upon row of jagged line-slicing thorns studded along the back, wings and tail. You have wrestled this leviathan up from a dark depth of over 140 metres almost to within sight of the boat. She doesn’t like the intensity of light from above and suddenly headstands, beats massive wings and powers headlong inexorably for the seabed.

With the drag carefully set harness straps bite into your shoulders. Tight as a guitar string, line peels grudgingly from the reel. Battle is locked for several long minutes, then sickeningly the rod abruptly relaxes and the giant fish is gone, taking the hook, trace and weight with it.

You wind in the slack and discover the tough 50lb mono line looks like it’s been rasped with cheese grater… you’ve been fatally tailed. Your main line had been raked through by the skate’s coarse skin, and a fish lifetime is offski because you put your trust in that wholly inappropriate ebay ‘SKATE’ rig.

So how do you combat this all too common scenario? Go to a 10ft, 250lb mono trace perhaps? Well you could, but imagine having to drop a large bait such as two whole mackerel on a 12/0 hook plus 2lb of lead down through over 500 feet of water. Tangling around the main line is just about guaranteed at some point, and once the bait is down you can’t be sure no way of knowing it’s not wrapped and hanging 10ft off the bottom; even if it is only partially tangled, if a big skate takes the bait there’s a good chance of the tangle resulting in a broken line.

The other problem with long traces for common skate fishing is deep hooked fish. Three times last year anglers on my boat had a big common skate with a lost trace in its mouth, and without exception it was a long trace of eight feet or more. Each time the hook was so deep it couldn’t be seen, so the offending trace was trimmed as close to the hook as possible and the fish released.

Deep hooking typically occurs because with a 10 foot trace the fish can sit munching on the bait without any rod indication in such depths of water. Theoretically, a skate can swim  up to 20 feet while swallowing the bait before the rod shows a bite; this is plenty of time for gut hooking to occur.

The answer to this problem is to fish a far shorter hooklength of around 12-14 inches. This way, as soon as a fish takes the bait there is a visible indication on the rod tip, and if you strike straight away you will hook it in the jaw 9-out-of-10 times, and eliminate the potential for gut-hooking.

To counter the risk of the tail sawing through the main line a 10ft, 250lb mono rubbing length is used behind the short hook trace. A compact detachable boom rides on the rubbing length, which will slide off the trace in the event of line breakage, ensuring the fish will only have a barbless hook in its mouth not it’s throat or stomach which it should manage to expel after a period. 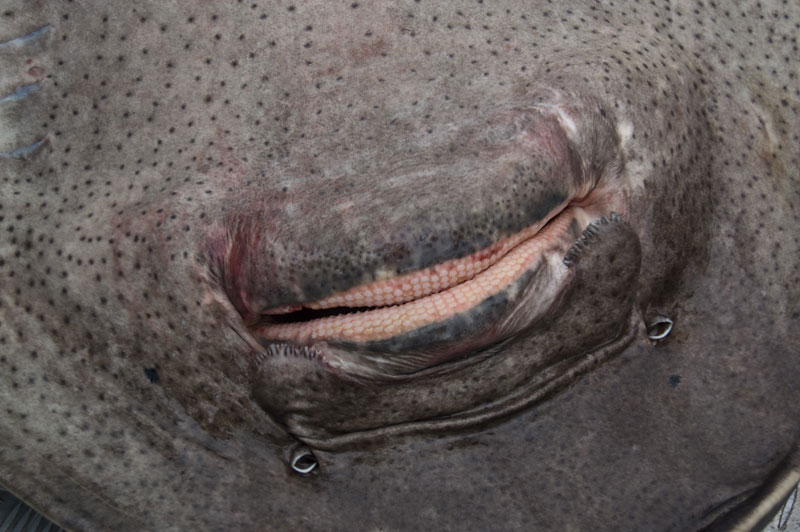 While you could use a short trace with a wind-on leader, below is easier method to ensure safe and effective hooking of these giants. The working principal of the following rig is that the sliding tube will prevent tangles when the bait is lowered to the seabed, but should a break-off occur, the boom and weight will be jettisoned. This tutorial intends to tip the wink to budding common skate anglers, providing the best chance of landing that huge skate, while giving that fish the best possible chance of survival beyond the encounter.

Building the custom common skate trace takes place in three stages. Follow the step-by-step instructions below and by clicking through the tutorial gallery function at the bottom of the page. 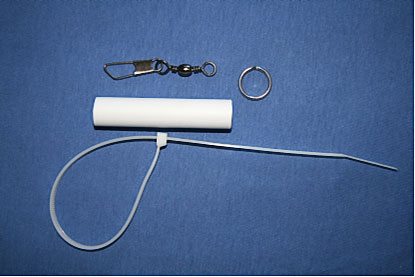 This is simply a short piece 10 – 30 cm of plastic central heating pipe available from places such as B&Q at only a couple of pounds for a six foot length, a cable tie and a cheap snap-lock swivel to hold the lead. 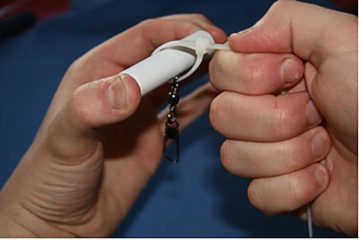 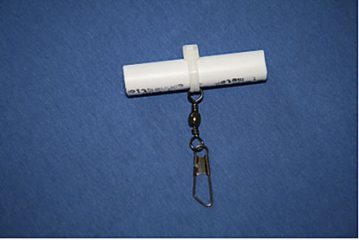 Simply attach as per pictures, just make sure you pull it very tightly to avoid slippage or use a dab of superglue to lock it in position if you like. 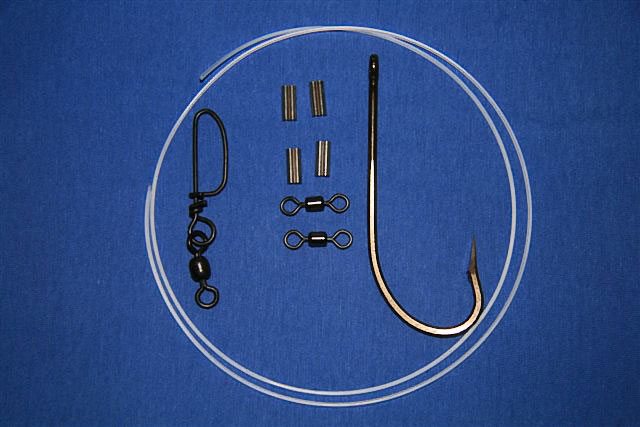 Use proper crimping pliers as merely squashing down crimps with a standard pair of pliers doesn’t provided a suitably secure or neat crimped finish. 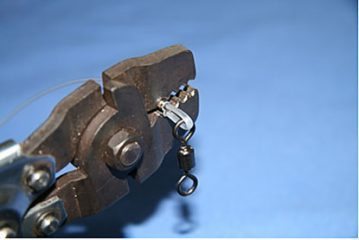 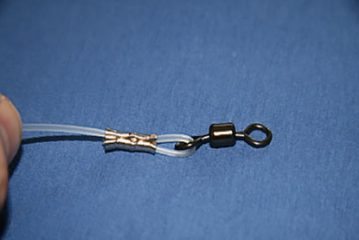 A simple ‘Offshore loop’ (pictured below) is used to connect the hook. 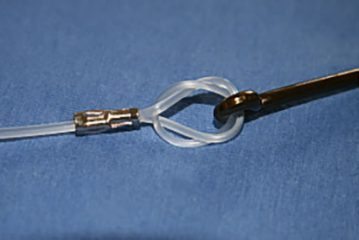 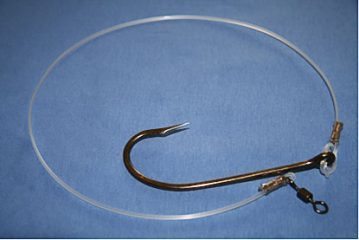 You will need a 300lb buckle swivel, a 300lb rolling swivel, a 20mm or bigger split ring, eight feet or more of 250lb nylon, and two double crimps to suit nylon. This follow the same build pattern as the hook-length, but use 8-10 feet of 250lb nylon. Crimp a swivel to each end and attach the split ring to the top eye of the buckle swivel – this acts as a stopper for the removable boom. As you can see pictured, the top swivel will pass through the boom allowing a lost fish to escape with only the trace minus the lead weight. 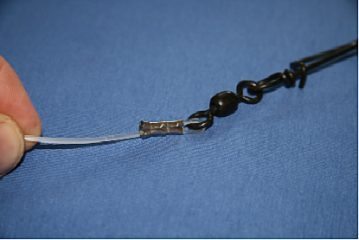 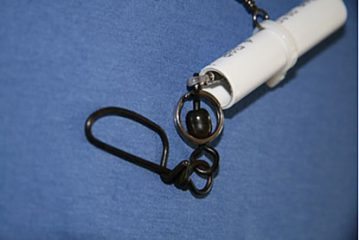 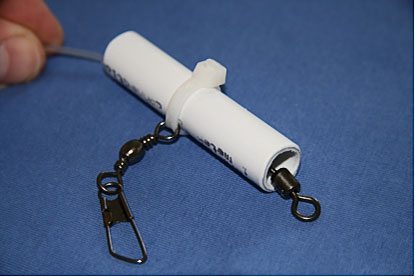 The finished rig (pictured below)is simple, effective and tangle free. It is good for repeated use, and some skate anglers can boast 20 or more 100lb plus fish in a season on the same hook-length and hook. 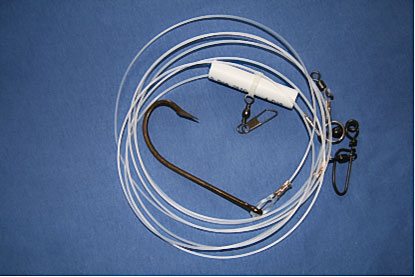 For more information on catching and caring for common skate visit www.catchalot.co.uk