Floating beads are becoming increasingly popular with shore anglers fishing on the clean beach and other coastal marks. The beads are available in several shapes and sizes and cut-to-size foam is also accessible on the market at home and abroad.

There are several reasons for the sea angler to utilise floating beads. They may wish to provide buoyancy to attempt to escape the attention of bait robbing crabs, or allow the floaty baits to roam over the seabed in the current, tethered only by the snood length. A third reason is to fish in the upper areas of the sea for pelagic species such as mackerel and garfish.

Over the past month I have been testing out various hook, bait and bead configurations and have managed to capture some interesting footage off the shallow Caithness beaches. The footage is shot in water varying from one to two metres but the depth of water will not have an effect on the buoyancy of the various floating beads although worm baits may be very slightly less buoyant as the pressure affects internal air spaces.

The shallow water helps with the video shooting by providing light and helping to maintain the natural colours.

All the rigs used were set up paternoster style using either two-way beads or trapped swivels. The snoods were kept comparatively short to try and ensure that the baited hooks stayed in shot.

Single Round Bead and Mackerel

The bait is restricted only by the length of the snood and wave movement. This setup will easily present a bait in the upper water levels if located away from the bottom of the rig where it is tethered by the lead weight. The mackerel belly strip is particularly effective.

The weight of the mackerel compensates for the slightly larger bead volume and it is unlikely to float up as far as the upper water levels. The beads used are the pull on variety and they do tend to slip as can be seen when the small turbot attacks the furthest away bait.

The second oval bead assists in helping the larger bait to fish higher in the water. However, the height from the seabed is affected by the strength of the water movement caused by, current, tide and in particular wave movement in the shallower water. The second half of the video shows the wave effects.

Single Round Bead and Ragworm

Of the various worms used by the sea angler the ragworm is probably the lightest and hence most buoyant. The single round bead, while not lifting the hook far from the seabed does provide great movement.

The lugworm is the heaviest of the worms used for bait, by length. The single oval bead barely lifts the baited hook from the seabed but it does allow the wave movement to shift the bait around.

Adding an additional oval bead to the snood will help suspend the lugworm pop-up style and provide extra movement to the baits as the water swirls around. As with the other rigs the topmost bait will float higher with less restriction from the weight.

What I Have Discovered

Wading through around ten hours of video footage has allowed me to make the following observations which I hope will be of use: 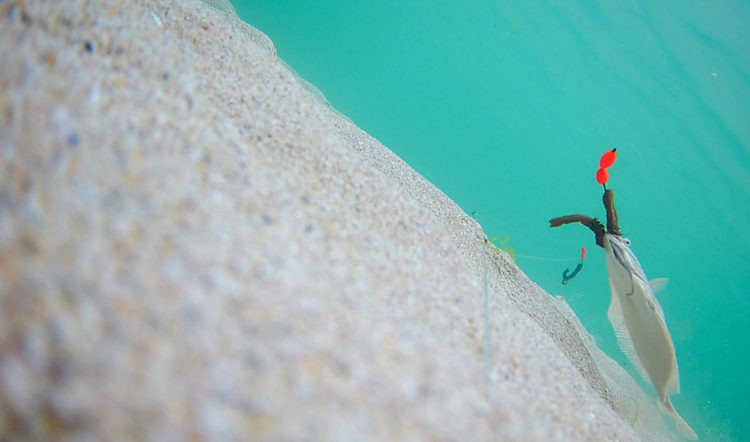 With smaller baits and fine wire hooks, rigs unadorned by floating beads will still move with the movement of the waves but the area covered is reduced and the bait stays much closer to the seabed.