How to make your own lead weights

Before we begin, it cannot be stated strongly enough that safety must come first at all times. Lead in its molten form can be a nasty substance. As well as being toxic and giving off noxious fumes from the contaminants attached to particularly old lead, it also has the potential to cannon out of the melting pot and all over the place, especially if damp lead is added at the molten stage. Surface or trapped moisture and molten lead are an explosive mixture and there is a real risk of serious injury if care is not taken.

The best place to make your leads is a well ventilated garage / workshop or garden shed. Never make leads in the kitchen on the gas stove… you would not believe how many crazy fishermen do this! If melting dirty lead, set the pot on to melt and leave the area until the worst of the fumes have dissipated and then skim off the slag from the top of the pot. 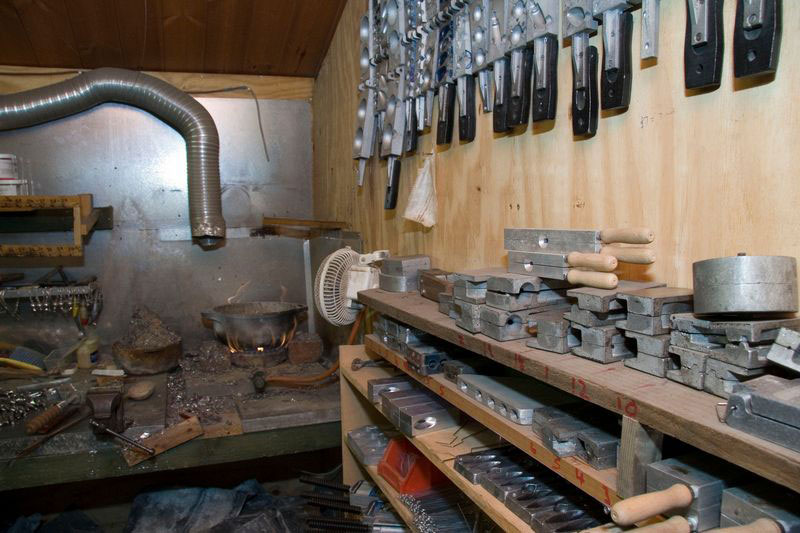 Make sure the door to the workspace is wide open, and also open window if possible to create an atmosphere-purging through-draft. If possible set up an old vent-axia extractor to take the fumes away from the working area. In addition to wearing suitable clothing that covers your arms and legs always wear protective glasses when working with lead. Also, never eat or drink when handling lead, and always wash your hands thoroughly.

Get some scrap lead, and the cleaner the better. A friendly plumber or scrap yard are the best sources for sheet lead, which is safer and cleaner to use than piping. A cast iron cauldron is best for melting lead in, although an aluminium saucepan will suffice. Car boot sales can turn up some excellent inexpensive melting pots. Electric crucibles are also available to melt the lead, but the ones with the pouring spouts are not recommended for casting anything larger than 1oz. 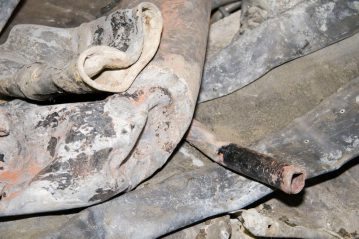 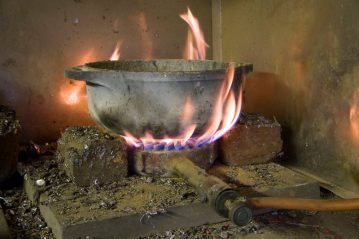 A good heat source is vital. A propane-supplied (that’s the orange coloured bottle) gas ring is ideal. A good gas ring can be bought from plumbers’ merchants or hardware stores for around £20. You also need a ladle to take lead from the pot to the mould. Look for one that is riveted to a strong wooden handle. Suitable ladles turn up in the most unlikely places, but car boot sales are again good places to look. Also have if you have a local Chinese supermarket, have a grub around in there. A heat-proof glove or mitten is another essential. I have found a JML oven glove, bought from Ebay works best.

Once you have your set up ready it is time to get yourself the moulds you desire. Ebay is a good starting point for moulds, but mail order tackle outlets like UK Hooks carry a wide range of moulds for shore and boat fishing leads etc, including the superb American made Do-It range. These precision moulds have the advantage of being fitted with wooden handles. Shore lead makers should check out UK Hooks’ brand new ‘Hooker’ range of grip-lead and beach bomb moulds these are in a class of their own and will be reviewed on PSF very soon. Most suppliers of moulds will also be able to provide the necessary wires etc. 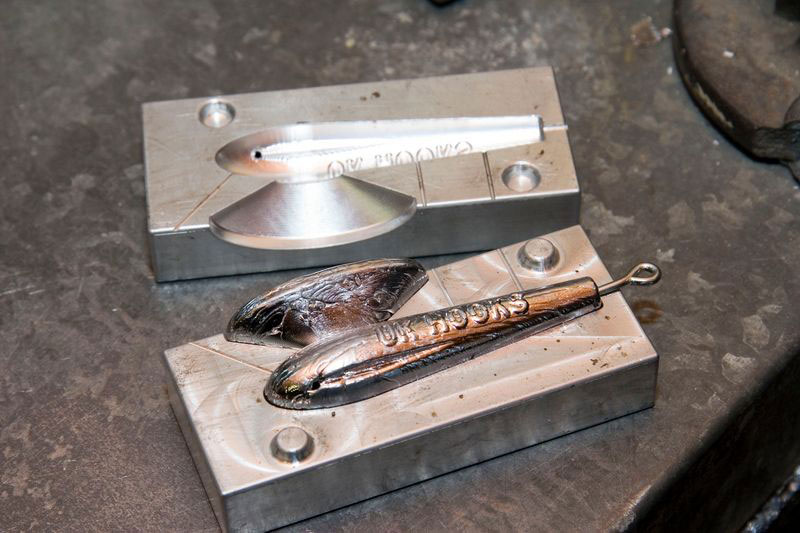 Avoid cheap moulds and budget copy versions of accepted brands and shapes if at all possible. Quality moulds are far easier and speedier to work with, and sheer ease of use makes any extra initial cost well worth it.

With a precision made grip-lead mould you can make up to 100 leads an hour, whereas a poor quality mould in the same hands would struggle to turn out half of that amount. Grip leads retail around £1.20 each, and you don’t have to be Einstein to fathom over that £100 of lead weights in 60 minutes. Even if your mould costs £60, the outlay can be recouped in the first lead-making session. Unless your session is producing weights for the whole fishing year, you are not going to use all these leads yourself. And it is amazing how popular you can become among fellow anglers when word of your lead producing prowess gets out. 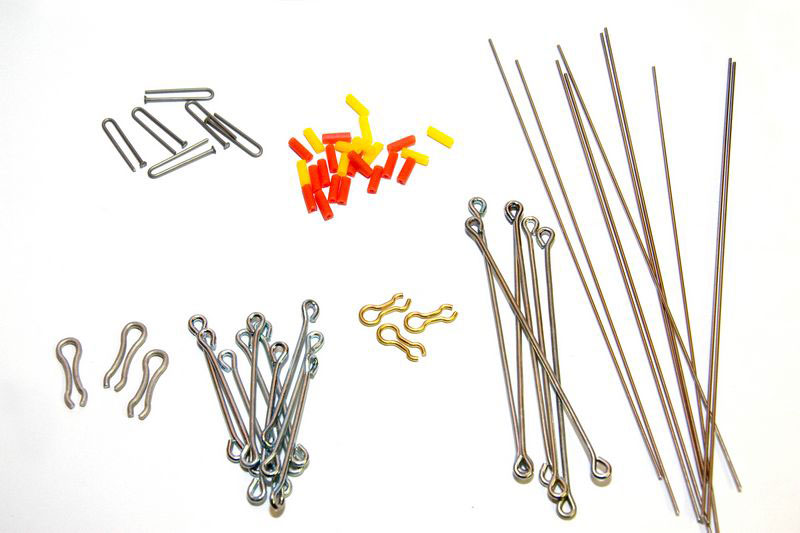 With everything in place it’s time to make some fishing weights. First fill your caldron with dry lead and light the gas. After about 15 minutes the lead will start to melt. If required, add more dry lead to the molten lead in the pot. It is essential that the additional lead is completely dry because any moisture will make the molten lead rumble and spit at best, and explode all over you at worst. This is a very serious business so be warned.

While the lead is melting and reaching a good hot pouring temperature, you can set up your mould ready for the first pour. Insert the tail wire or wire loop at the top of the mould, and if producing a grip sinker, push the grip wire pins through the clamped mould. A drop of oil or carbon soot from a candle can make these wires easier to release. This trick also works for the centre wire if you’re making drilled bullets, egg slip sinkers or barrel leads. 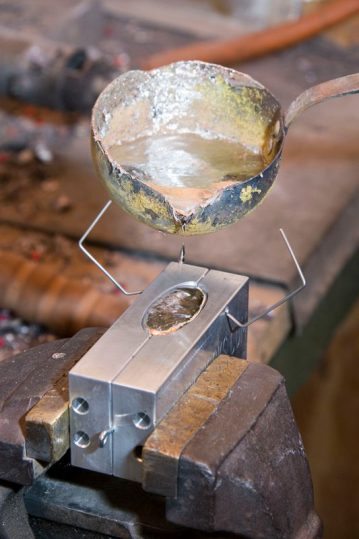 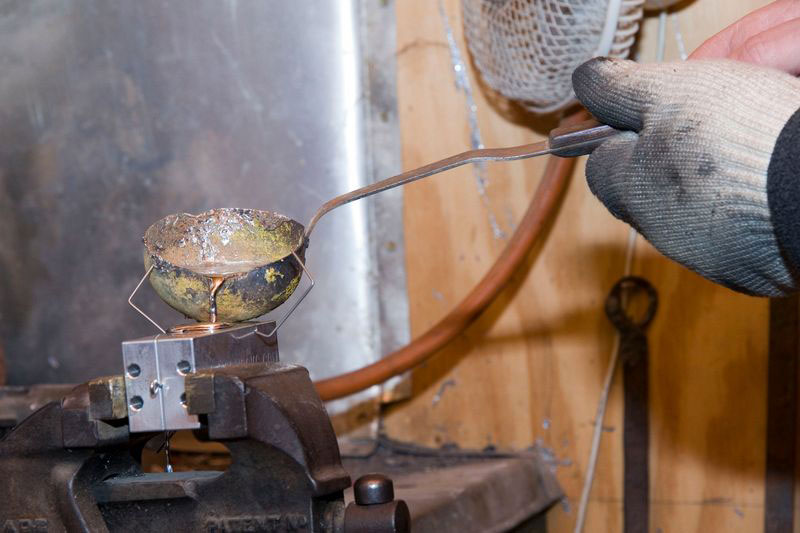 A vice on the workbench is the easiest way to hold the mould secure. Other methods include a simple clamp or even two bricks each side of the mould. When the lead is hot enough take the ladle to the caldron and cup some up, then slowly pour it into your mould. With some intricate moulds you may have to perform a few blank pours (without wires) to raise the mould temperature enough to stop the lead prematurely solidifying in the pour hole mid-pour. At first the lead will set instantly but when you have poured a dozen or so, the mould will heat up to a good working temperature and the lead will then take a little longer to set.

When the lead is set in the mould, remove the grip wire plug pins, take the mould out of the vice, remembering to wear heat resistant glove, and remove the hot new lead carefully from the cavity in the mould. Be aware that the weights will be too hot to handle for a considerable time. Repeat the process and after about 30 mins you will start to see a satisfying pile of leads building up on your bench.

When casting larger leads for boat fishing the mould may become too hot after a dozen or so pours, causing the temporary gaping along the seems and the lead to spill straight through the edges. When this happens, let the mould cool in the air. Don’t be tempted to use water to cool the mould or the leads.

When the leads have cooled trim off the excess sprue where the lead has been poured in with side-cutters and you’re ready to put the grip wires in. The finished article is then ready to fish with. Once you’ve mastered pouring lead weights it’s an easy step to move onto casting pirks or leadheads from more specialized moulds. 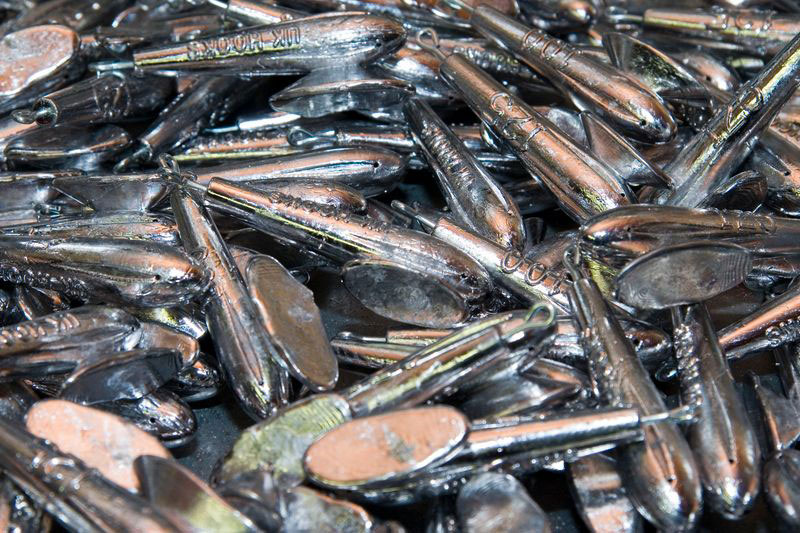 4  Some electric units will not heat lead to maximum temperature when completely full. Try with only 1/2 full.

5  Try a different lead alloy. Wheel balance weights can be the cause of many moulding problems.

7  Oil pin lightly or smoke with carbon soot before first use.

8  Remove rod quickly before the solidifying lead shrinks and grips the pin.

9  Air trapped inside cavity: This can occur with a new, very tight mould. Test by placing a small piece of paper between the surfaces of the mould. A small corner of an adhesive label or gummed paper, like the seal on an envelope or corner of a postage stamp, will serve very well for this purpose by temporarily adhering to the moulds’ surface. The paper will not allow the mould to close absolutely tight, and this small gap will permit air to escape from the cavity. If complete castings are obtained, leave the paper in place until the mould is broken in (usually 100-200 castings) and then remove it.

11  Smoke the mould cavities by positioning them just above a candle’s flame. A thin coat of black carbon soot will form which will help the flow of molten lead into the cavities and also make it easier to remove the cast lead parts. 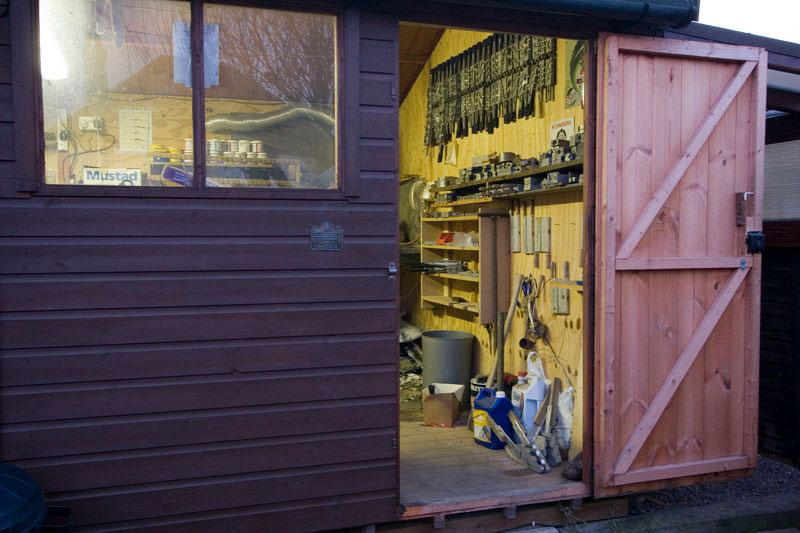