Eight-year-old Luke Preston had been unsuccessful when codling fishing at Morecambe, so his dad brought him to Fleetwood in the hope of finally catching something to put a bend in his rod. An hour into the flood at Dronfields Road his rod crashed from the rod rest and Luke was onto the action. He soon had a lovely plump codling on the beach to reward him for his efforts and proving that the Force is with Luke. 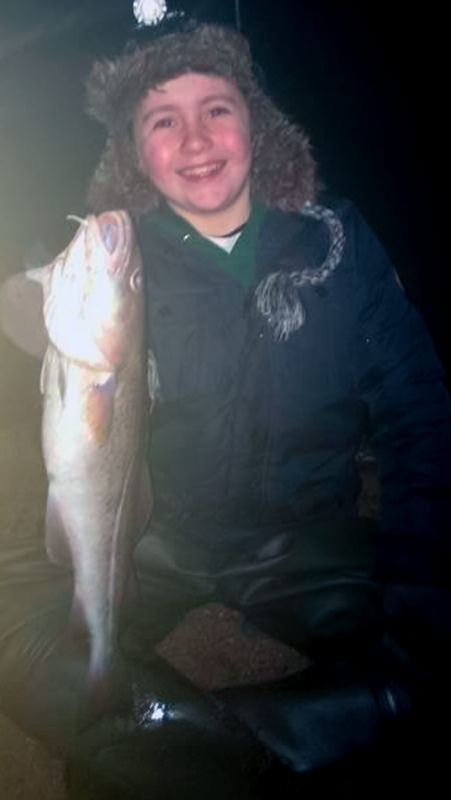 Luke Preston with his codling

Rick Pennington arrived at Gynn and set up for about 1pm just as the tide hit the Wall. He fished two rods, one close in and the other a bit farther out into the gulley. Within five minutes a thump was followed by a slack liner resulting in a nice 2½lb codling which unfortunately dropped off while handlining up the wall. It landed on the slope and gave a wave as it wriggled safely back into the water.

The next three hours in daylight were not brilliant, five rockling, a flounder and a pin whiting between Philip Cunningham and Rick. As darkness fell the better whiting started hitting at range and just as the tide dropped from the Wall Phil had a codling of 2 lb and Rick three better whiting. One of 35 cm would be put to the taste test. All in all, not a bad day to fish with gentle winds. The fresh coffee and sausage butties cooked on Alan Roe’s Coleman stove certainly kept us happy between the fish.

Last Thursday Mark Yule from Wyre Boat Angling Club stayed on dry ground for a session and fished Rossall over low water. He managed two cod in between the millions of whiting out there. The fish took on frozen blacks and all were released.

Last Thursday Dave Brown met up with Jordan Russell of Bispham Angling and Gaz Ayres for a few hours down to low water. He was straight into codling and ended up with seven codling and a whiting.

Jordan Russell reports that it was “Cod Galore” on Tuesday night as he and Joe Green had a session at Knott End for a change. Despite be sceptical about their chances on a new venue they fished the tide down to low water and it became a codling a cast. They were both casting 100 yards to some rough ground that they located and the results were amazing.

They fished with pulley pennel rigs baited with rag worm from Jordan’s shop and some frozen black worm that we had kept from the last set of tides which were too small to sell. Altogether they had ten codling raging from 1lb to 2½lb.

It proved great sport, using Grauvell Zennith braided main line which gave Jordan the distance casting required and resulted in clear bites. It was a decent bit of sport considering how quiet it has been over the last couple of weeks.

Simon Ablard fished Rossall with Chris Ashton for three hours on the fl0od and one on the ebb. Using a single rod each they landed around 20 fish, mainly whiting with a couple of rockling, a dogfish and a last cast bass thrown in. 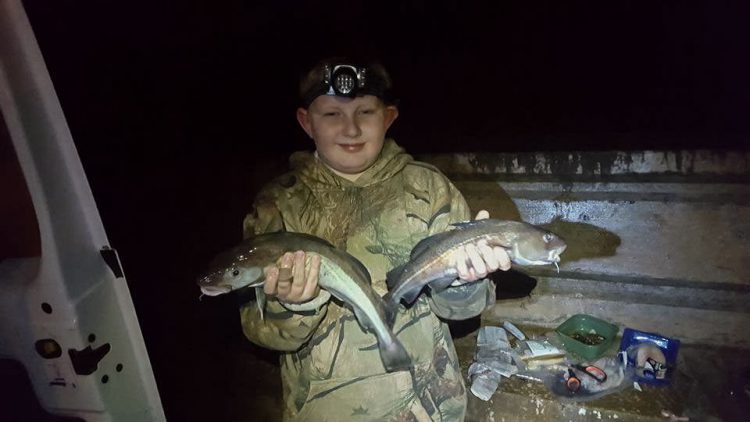 Nine year old Luke Curedon with a brace of codling

Paul Goodchild fished Rossall on Saturday night and the whiting ran riot. He landed 25-30 whiting, a bonus codling of 46cm and two doggies. Using rag and black lug worm he also missed two massive cod bites. The rag proved more productive than the lugworm which was a bit of a surprise.