Since the fishery was first discovered by members of the Caithness Sea Angling Association in the early 90’s the north coast porbeagle shark fishing has quietly simmered away off the radar. Top Scottish rod Scott Gibson tells the tale of a recent couple of days out of Scrabster with Chris Bennett hunting these massive, top predators.

I was contacted by my long-time friend Ronnie Campbell, a charter skipper from Oban best known for skate fishing, last Tuesday. He wanted to know if I fancied a few days fishing out of Scrabster for porbeagle shark. I jumped at the chance as it’s a fish I’ve wanted to catch for as long as I can remember.

Ronnie and Raymond More and I met in Inverness on the following Sunday evening and headed north for Scrabster. Weather conditions were looking unseasonably settled for our two-day charter and expectations were high. Monday dawned at the back of eight to perfect conditions, bright blue skies and not a breath of wind. The first stop of the day was in the bay to catch the bait for the day, live coal fish and cod around the one pound mark. 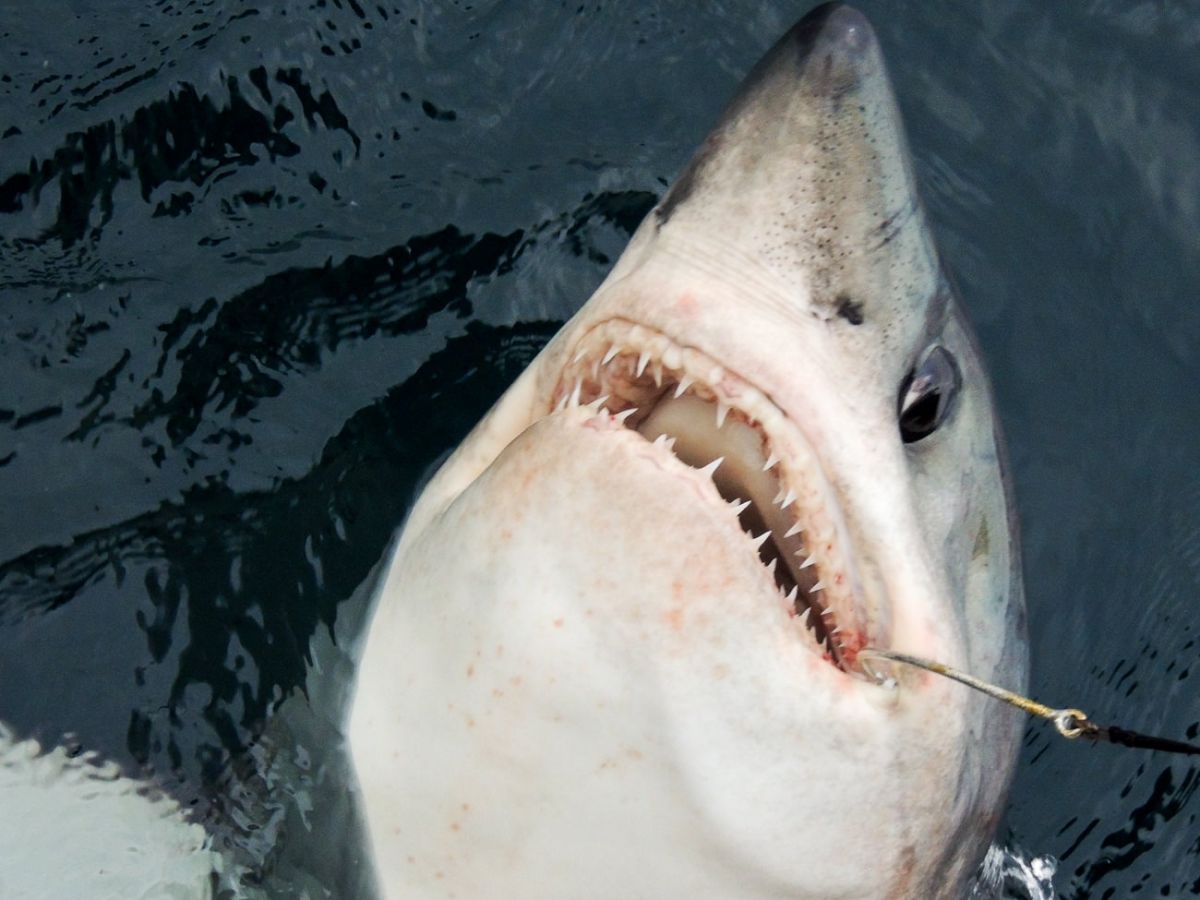 The live well barrel was soon stocked with prime porbeagle shark food and we set off across towards Dunnet Head. As the Eun Na Mara steamed eastwards we decided who was going to have the first shot at the fish. Skipper Chris prefers to limit the shark rods to two at a time to prevent tangles. Raymond had visited the week before and landed four shark to 270lb and kindly volunteered to take the third shot at the porbeagle shark and allow the two, eager shark virgins to hopefully hook up first. Ronnie and I tossed a coin and the jammy git called right and would be first to take on the shark.

The method used by the skipper Chris is to set up the two rods with one fishing one near the surface away from the boat on a balloon. The second rod is fished deeper below the boat. This arrangement helps prevent the chaos which can ensue if multiple rods are used.

Arriving at the fishing grounds, on the edge of the Pentland Firth, skipper Chris and deck hand Brian set up the 80lb class Penn International rods combined with Shimano Tiagra 50W reels. Attached to the serious end of the main line were 5 to 6 metres of 480lb wire terminating in 8/0 to 12/0 hooks and a live coalfish. Within ten minutes of setting the gear a shark showed interest in the bait. It made a couple of runs and Ronnie leant into the fish. Unfortunately, after a short period our first fish spat the hook. 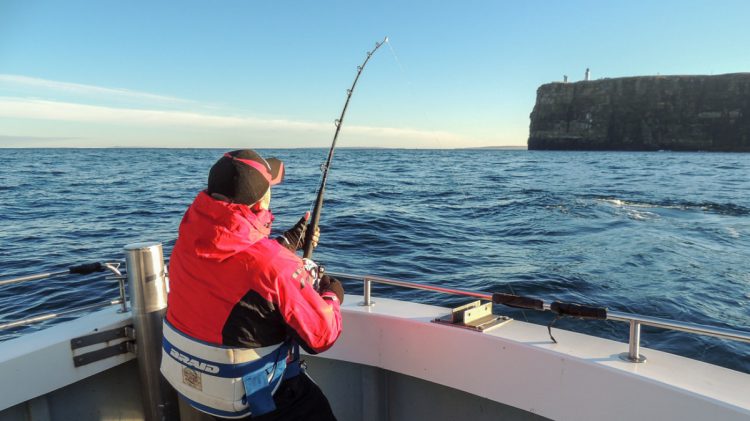 We didn’t have long to wait for the next take and this time I was up. I had the fish on for a bit longer this time, getting a chance to feel the power but again the porbeagle threw the hook! This first feel of the power was an eye opener. I knew they would be powerful but it has to be experienced to truly appreciate just how much power these fish have.

There was no shortage of interest in the baits, with sharks also playing with the balloon and a few cruising about right under the boat. In the crystal clear, water conditions it was spectacular to see these fish in their natural environment. 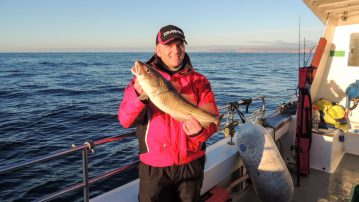 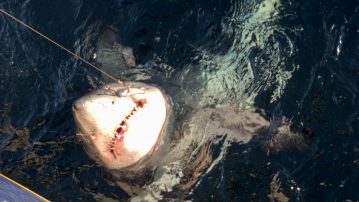 Back to the fishing we had another shark on and it was Ronnie’s turn again, but alas the fish spat the hook again after another short fight. This was getting really frustrating.

The baits were soon back in the water and with the depth barely set we were in again. As my rotation had come around again I stepped up to take this one. At last success, I managed to get the smallest fish of the day to the boat after a short fight. As fish were all released at the side of the boat the weights were estimated, this one at 160lb.

This shark had spots on its head and flanks and there is a line of thought that these are variation of the porbeagle, possibly mixed with the salmon shark, although this has still to be proved. 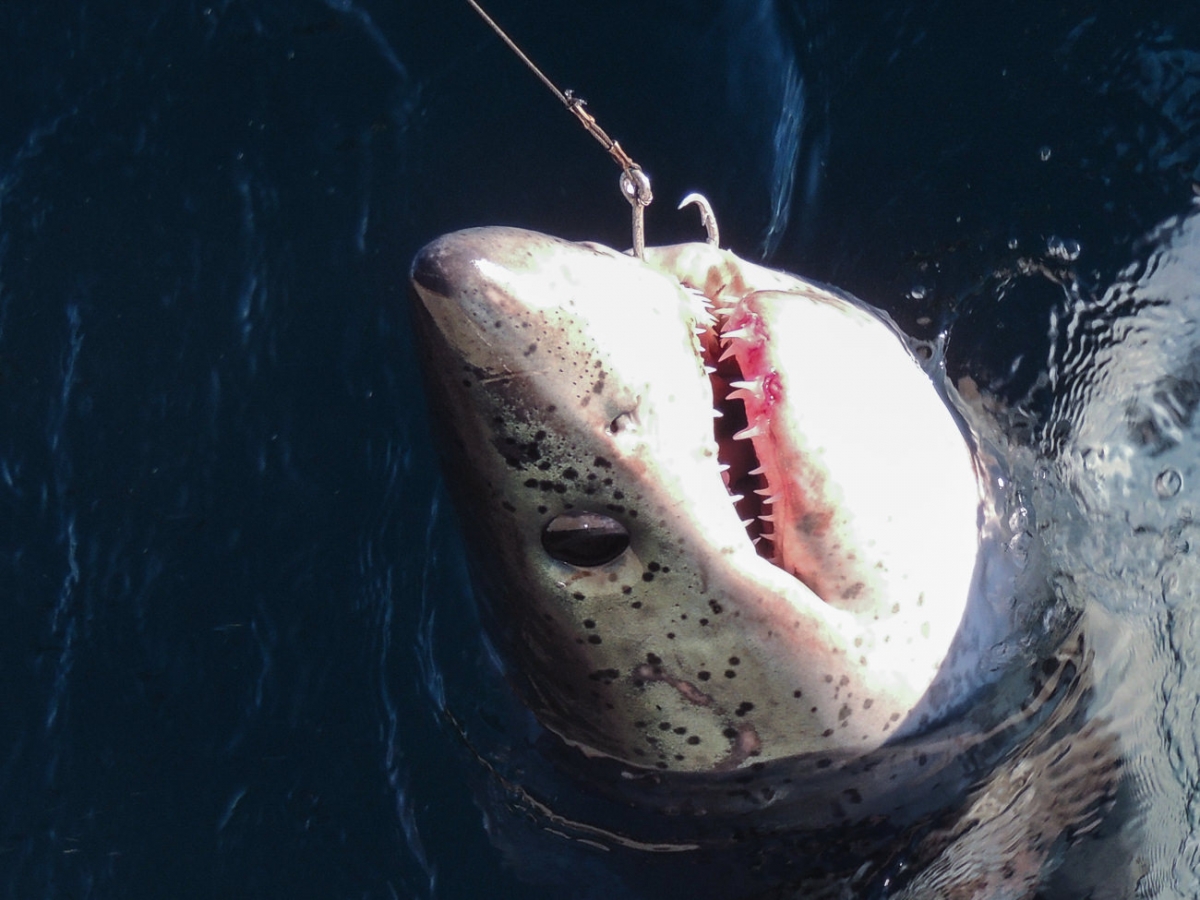 Now that I had my first porbeagle it was back to Ronnie to try and break his duck. After another two lost fish, we changed the hooks from circle to J hooks to see if we could get the hook to hold. The fish all though plentiful were being a bit finicky. In jig time we had another hook up with Ronnie on the rod he managed to get another fish to the boat, this time a bigger fish of 250lb.

Now that Ronnie and I had caught our first porbeagle shark it would be Raymond’s chance at the next fish. It was now getting late in the day but there were still regular inquires and just as the winter sun was setting the ratchet screamed again. With Raymond in control we had our third shark to the boat in about 20mins, this time the biggest fish of the day at 270lb. 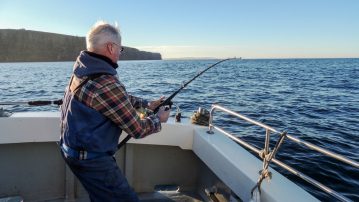 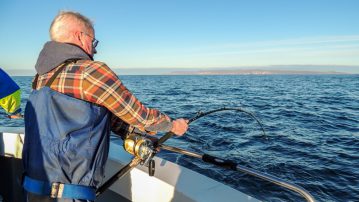 Once this fish was safely released we called it a day after one more short drift. All in all a fantastic day afloat with superb conditions and activity most of the day with only a couple of drifts without any shark interest. All three of us were happy if knackered and glad of the support provided by the Braid Brute Buster butt pad and harness. If only we had stuck to J hooks all day maybe we could have had half a dozen sharks to the boat.

A New Dawn, A New Day

The weather on our second day was a bit breezy and overcast but with the wind off the land we were still able to get out to the porbeagle shark grounds. Once over at Dunnet Head we discovered that the wind was going make it more difficult than we thought due to increase in the speed of the drift.

However, we didn’t have long to wait for some action. Crusing the surface was a large shark which nosed a dead coalfish previously thrown overboard. The porbeagle the shark checked out the dead fish three times before gulping it down. Spectacular to see with the shark was half out the water with each pass, who needs Jaws. 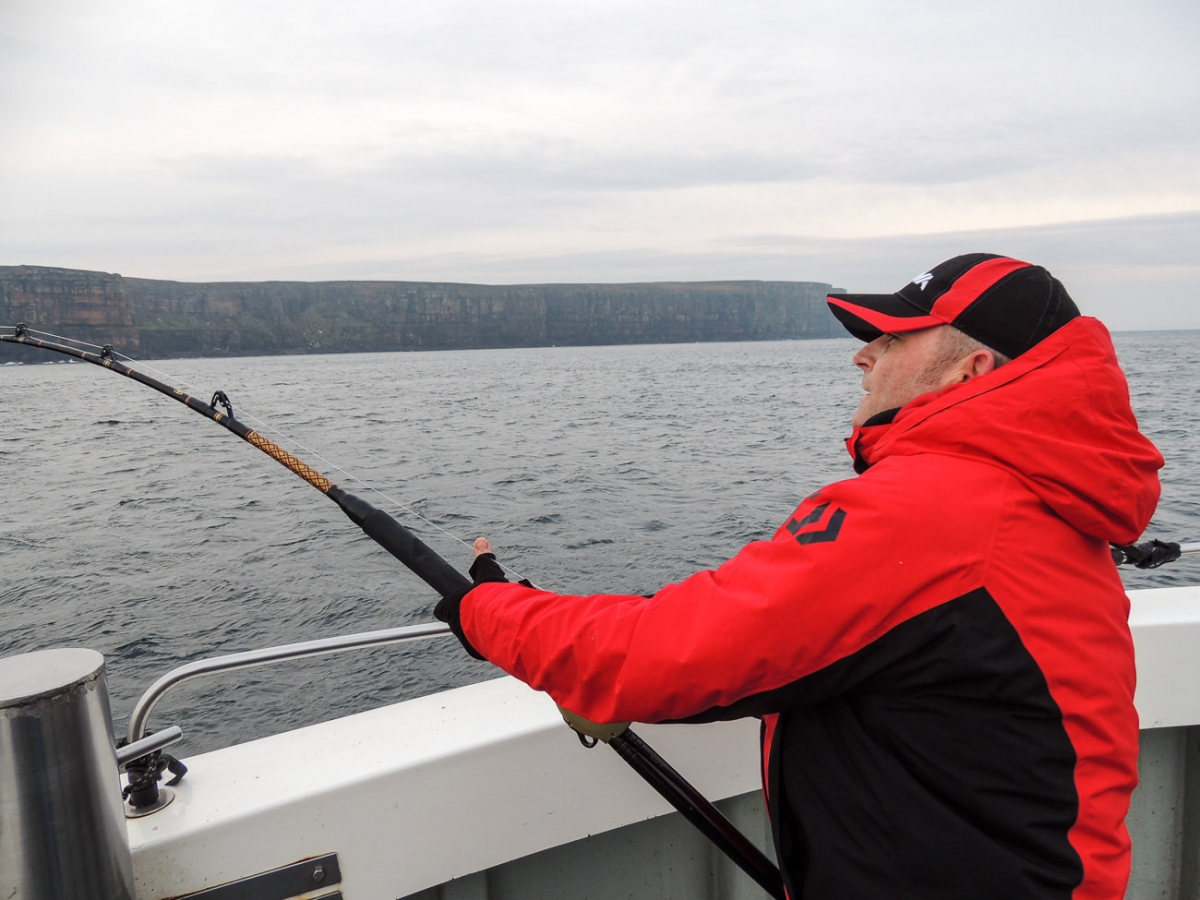 After the movie style action, we set the balloon bait near to the surface and there was an instant take. As I lifted the rod it was evident that this fish was a lot bigger than my fish from the day before. The shark provided a very strong fight initially with powerful runs that stripped line from the reel. The struggled changed to a heavy, heavy weight, a sure indication that the fish had become tail wrapped. This proved to be the case when the porbeagle, estimated by Chris at 300lb, came alongside. As the skipper grabbed the trace the porbeagle shark erupted and smashed the line, plunging off only leaving only a tail shot on camera. This is the heaviest fish I have ever caught by a long way.

The action continued, this time Ronnie was in to a fish but after another short fight the fish was gone, another hook thrown. Around lunch time we had another enquiry and this time it was Raymond’s turn. Another positive hook up and another good fish provided a spirited fight from a fish of 250lb which was also tail wrapped. This time Chris managed to unravel the trace and T-bar the fish at the side of the boat. The sheer power of these fish was evident from the shape of the hook extracted from the shark, it was nearly straightened! 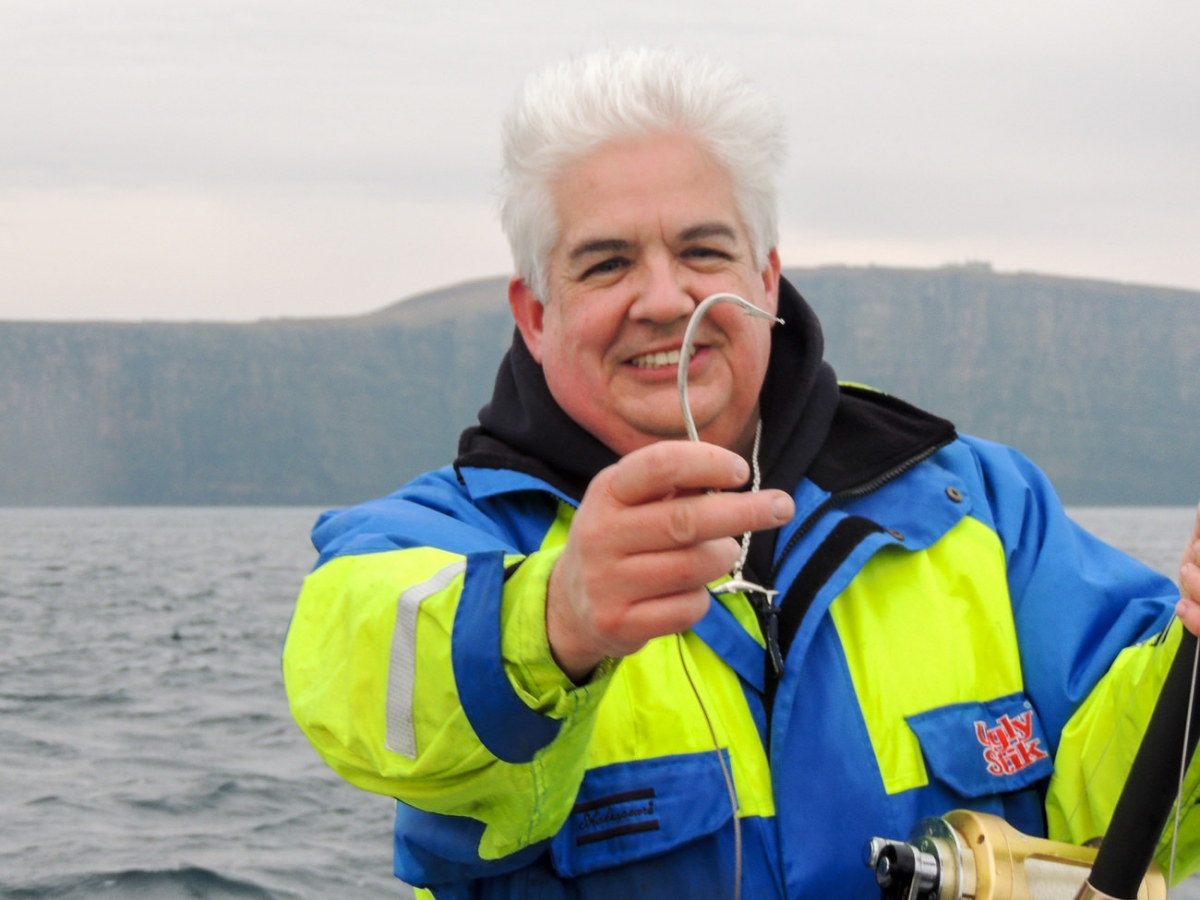 With a freshening wind affected the drift speed we were forced to move location. Almost instantly we had another shark on and on my rotation. After a few short runs the fish seemed to surrender and was coming in quite easily. The skipper presumed this was another small fish until it surfaced. It was a lot bigger than expected, estimated at 290lb. This fish was green and hadn’t realised what was happening yet. Chris warned me to get ready as the fish would power off as soon as it realised that it was hooked.

Sure enough, off it went diving fast and deep putting both me and the 80lb gear to the test. Another battle to the side of the boat but the fish was still fresh and with an eruption of spray it set off again. There is not much you can do with these fish other than let them run while applying as much as pressure as you can without exploding the line. Eventually after the third attempt Chris managed to unhook and release the fish, the chaotic spell was over.

Three fish to the boat and it was just past 2pm, plenty of time to get another one or two fish we hoped. Drifting in the same area we fished on and a couple of drifts later we hooked up again. Ronnie stepped up to the mark again. After couple of good runs the rhythm changed and it was evident that this fish was also tail wrapped. The fish of 180lb was being eased backwards to the boat ready to untangle when it exploded turning the wire trace in to something that looked like a exploded joke cigar. Even the smaller fish have extreme muscle strength. 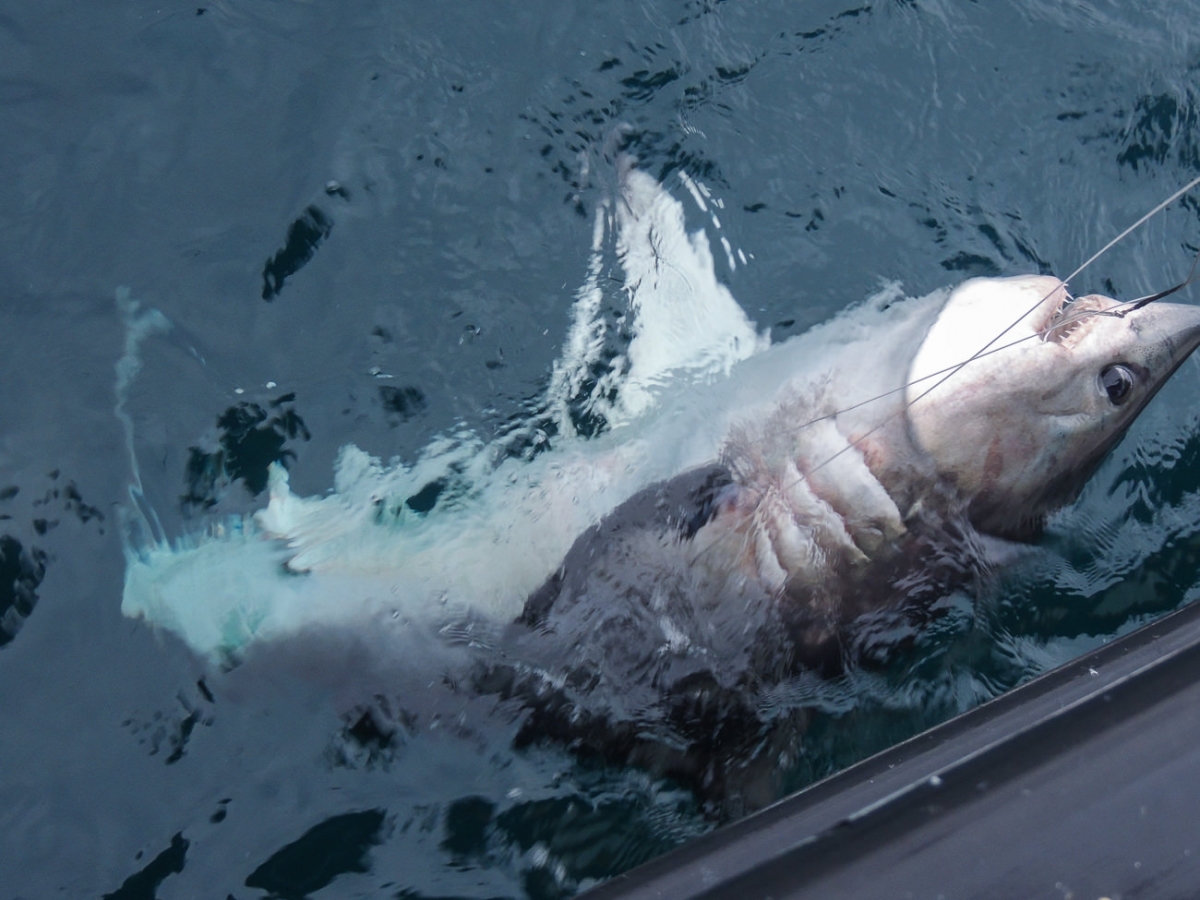 After resetting the drift and replacing another trace we started to lose the light and after two more drifts and no interest in the baits we all agreed that we had a successful day and that it was time to head to port.

We all thoroughly enjoyed our days afloat, with some exceptional weather conditions for this time of year. We were also spoiled given the tremendous porbeagle shark of action around the boat and on the rods.

Hook selection need consideration given the option of circle hooks or standard J hooks. Uisng circle hooks assists with species conservation and helps prevent deep or gut hooking the fish. When using circle hooks the angler must allow time to ensure the fish has the bait fully in the mouth. The hook set is more a steady application of pressure rather than a strike. In theory this should guarantee that the hook is orientated correctly to set in the corner of the shark’s mouth. This makes the release easier but can, as we discovered make for a precarious or non-existent hook hold. 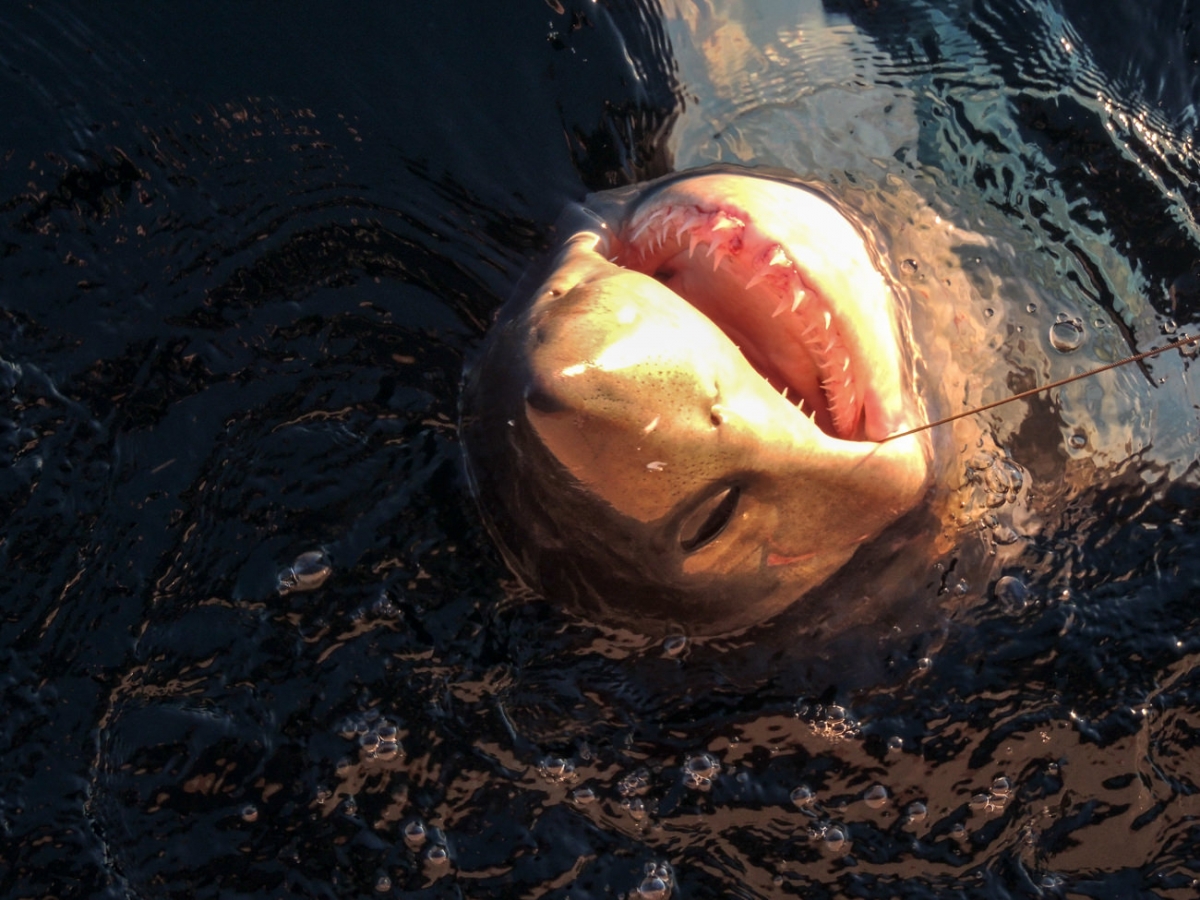 Using standard J hooks the hook up is more liable to be secure but runs the risk of deep, gut hooking. To reduce this risk smaller baits are utilised to leave the hook point clear and that the fish can fit the full bait in its mouth. The strike pressure on the fish needs to be applied early in the run to keep the hook located in a position that assists with removal. Bolt cutters can help with disgorging the hook in two pieces. 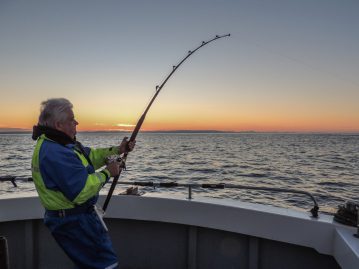 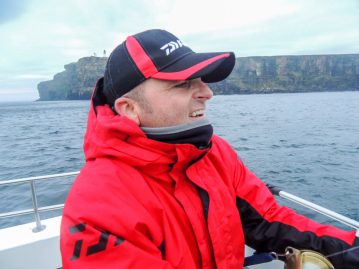 I would like to thank Ronnie and Raymond for organising and inviting me along for this memorable experience, also thanks to Chris and Brian for putting us on the fish.

Use Your Time Wisely on Winter Tackle Maintenance