Tony Baxter fished high water at Fleetwood and his two best cod weighed 4lb 5oz and 6lb 9oz. Both fish where taken on consecutive casts on the main ebb run off the tide. They fell to fresh and frozen worm cocktails baited on 2/0 short shank B940’s on an up-and-over pennel rig. Before high tony had loads of small fish including whiting and codling. 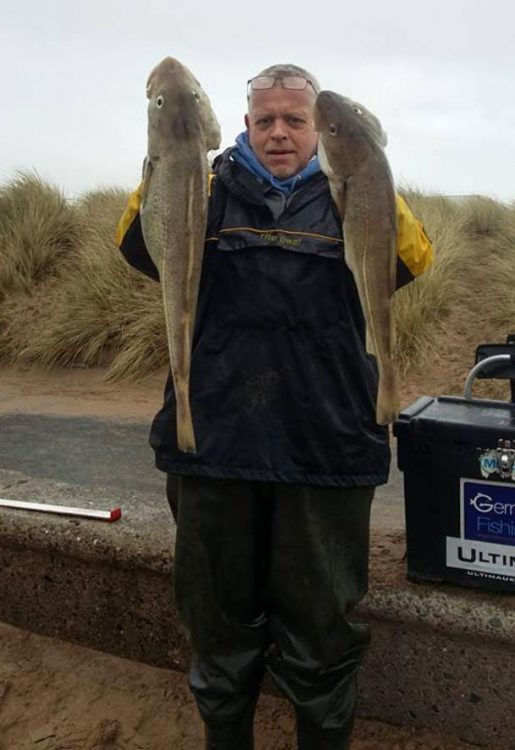 Chris Ashton, a member of Lancashire Sea Fishing, fished at 5-bar Gate with Graham Stott. The first baits were cast in around 2pm and resulted in a double hook up of codling. They fished the two rods between them and finished with 11 fish, three codling and eight whiting, two of the whiting were keeper size but were returned.

Chris Shaw fished the Gynn wall near Cavendish Road with new Lancashire Sea Fishing member Martyn Everett. It was codling a chuck from the off, with some nice chunky ones among them but still a lot of growing to do. Last cast Chris decided to go big or go home literally, so he loaded up with his last four worms on a pulley pennel rig and was rewarded shortly after with a big whiting. All fish were caught using fresh black worm and live swimmers, the pair also tried fish baits without interest.

Two cod in two casts for Wyre Boat Angling Club member Kevin Winters. The two codling were hooked on a pennel trace baited with black lug. The fish weighed in at an impressive 5lb 5oz and 6lb and both fish were caught towards the top of the tide. 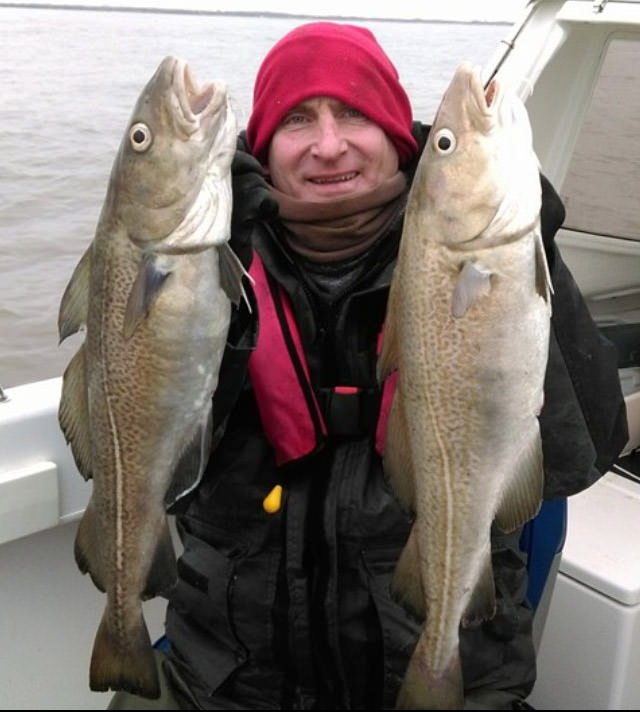 Jonathon hall reports at his news has been delayed as he waits for his fingers to defrost after a day fishing on Saturday 16th January. It was a freezing cold morning the car was frosted over and the breath was visible in the air. A perfect still winter morning. Jonathon picked up his boat with his Dad and arrived at the slip just after 9am. Alan and his boat Striker were already there set for launch and with the much appreciated assistance of Alan J Taylor, our tractor driving genius, both boats were safely saving a long walk back down to the beach.

After launching he noticed that Striker was having a bit of engine trouble. Jonathon popped over to offer some support, or at least take the micky. After a rash of four letter words the engine’s cooling system decided to defrost and the mighty Suzuki relived itself of its prostrate trouble as a clear stream of water shot out of the back.

They set off filled with anticipation for a great day cod fishing. They headed north in very calm seas up to some rough ground close to the posts just past Rossall School. After 25 minutes steaming they arrived at slack water, dropped anchor and removed the icicles from their noses, yep it was freezing.

They started fishing with a 3ft trace on a pennel rig baited with double black worm supplied by Jordan Russell and tipped this with squid. They started catching fish straight away, but they were all small codling and whiting although the dogfish were absent, fortunately. After a couple of hours of the small stuff and a coffee break they moved closer in over a sandy gully just off Rossall School.

This proved to be the right call as they quickly hit four cod between five and six pounds. Baiting up with a whole squid resulted in a couple of thornbacks to round off an excellent, if cold winter’s day afloat.

This Sunday, the 24th, sees the latest Bispham Angling shore competition with fishing from 09:00 to 13:00, check in at the shop at 8:00 hours. This is a bait supplied event and £10.00 entry fee with £5.00 for the bait pack which is collected on arrival at the shop and £5.00 which is for the prize fund. The bait pack consists of 15 fresh worm, three squid, one razor and one joey mackerel.

All fish on the day are measured and all measured fish should be signed by a witness or someone around you. The match is held from Red Bank Road, going south and this isn’t pegged and is one rod with a maximum of two hooks.