It has not been a bad week at all for sea fishing; plenty of whiting, dabs, flounders, codling and the odd plaice and dogfish. This shows that the temperature of the sea is now on the increase. We will start to see the plaice show very soon along with a few thornback rays and dogfish. The best bait at the moment is fresh black worm or rag worm tipped with either mackerel or squid. The flounders are found close in to the Gyn wall whereas the dogfish, codling and whiting are getting caught further out in to deeper water. Always remember if you can have a look at the layout of the beach before the sea comes in, it will give you a massive advantage in finding gulleys, sandbanks where fish feed and hold up.

This week North Pier has really shown the better side of the fishing. Loads of whiting, dabs, flounders and codling including one of 5lb 7oz for Tracey Howarth. 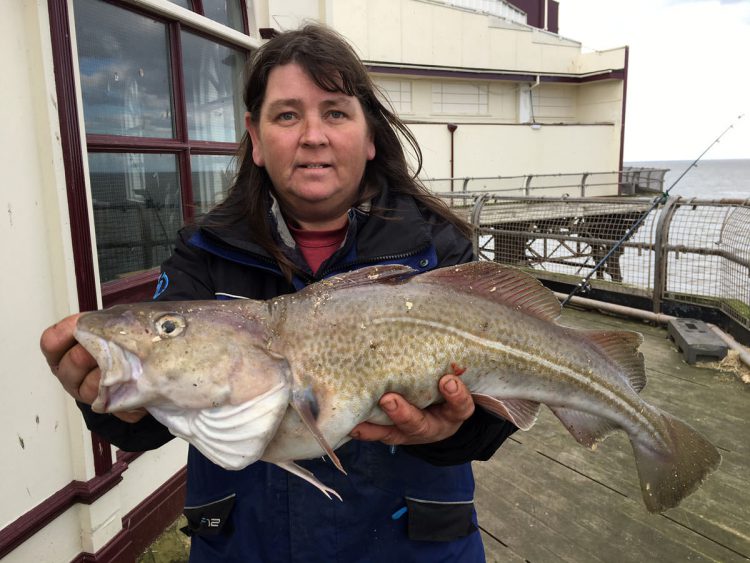 Fleetwood and District Angling Club ran a match last Sunday at Five Bar Gate. It was hard going as although the sea conditions were good it was cold and wet. Fifteen members turned out and most avoided the blank and two codling were caught today. Steve Gargan had one of 49cm while Craig Thompson’s fish measured 45cm. Mainly small whiting made up the bulk of the catches.

The club would like to welcome two new members who joined on match day, Ruth Parkes and Mark Armer, we hope you enjoy this small friendly club and manage to take part in a few events.

Lancashire Sea Fishing members have been making the most of it on the shore. Simon Ablard fished Rossall over low water last Monday with Chris Ashton. They found it very slow going, the weed was a nightmare but they still managed a couple of fish each including a 38cm cod which was returned, a reasonable sized flounder and two small whiting. Everything caught on fresh black from Bispham Angling.

Ray Rodger reports last Tuesday Quiet night on the Gynn, not many down, it was a lovely February evening, first cast I had a nice thump on my close in rod which resulted in a good flounder. Quiet for a while then the whiting turned up followed by the dabs and towards the end I had a rockling. Four different species wish the species hunt started today Rick Pennington. Bait was shells black ragworm and squid and a bit of mackerel. Left at high water as everyone else had gone.

Anthony Paynie headed further afield to Morecambe Bay where there were a few codling about. Unfortunately, hovercraft antics disturbed the start of the session. As he waited eagerly for the turn of the tide, Anthony had a slack liner and started reeling in but the fish was off. He had three more casts resulting in two flounders before the tide forced him off the mark.

Lee Smithson fished last Friday at the bottom of Redbank Road where it was a fish a chuck as small whiting hit frozen black and squid. A switch to a full sandeel on 2/0 pulley pennel picked out the bigger whiting and a rockling joined them. Other anglers had small dabs, whiting and flounder.

Ray Rodger also had a session on Saturday at the Gynn basking in sunshine. Ray had six different species, rockling, whiting, flounder, dabs, dogfish and finally a small plaice. Baits blackworm, ragworm, razorfish, squid and sandeel. Ray was impressed with the fishing which was even better than the previous day.

The Lancashire Sea Fishing Group in conjunction with Bispham Angling have a night match this Thursday. Registration 6pm at the shop and rods in at 7pm- 10.30pm. For more details please ring Bispham Angling on 01253 358194.

Rick Pennington fished last Sunday from Gynn where it started off pretty well with whiting all around for Rick, Andy O’Hara and Peter Lee Catchpole. The persistent drizzle wasn’t too bad but the guys were thankful for the shelter of the car tailgate. Fishing went off a while at high water but again the dabs came on just after the turn. Everything was going well but the wind turned right round shortly into the ebb and picked up speed from the NW. They had diagonal waves near the end and the fishing went right off.

No new species for Rick who was aiming for a doggie or anything new for the Species Comp. Andy only managed whiting for the hunt but quite a few doubles. Peter had a good session with four dabs, four whiting and a rockling. The rain finally stopped the last 90 minutes so luckily they could pack up dry.