Again, this week it is all about the thornback ray invasion, every year we seem to be seeing more and more of these fish.  It’s probably just as well as we seem to be short of anything else to catch.

Weed has been a problem for the shore angler this week with wafts of heavy weed floating on the surface making angling difficult on the ebb tides.

Colchester Sea Angling Club held their second match of the season on the Holland beaches.  They had to contend with a blustery side wind but plenty of fish were caught.  12 anglers competed and fish were caught from the off, mostly whiting, pouting, rockling, bass and the odd small codling.

First place went to the in-form Steve Yallop with a mixed bag weighing 4lb 1oz, in second spot was Chris Mills on 3lb 2oz and third was new member Nik Highfield with 2lb 10oz. The heaviest flatfish prize went to Vic Pearce with a small dab and the heaviest round fish was won by Steve Yallop with an 8oz bass. 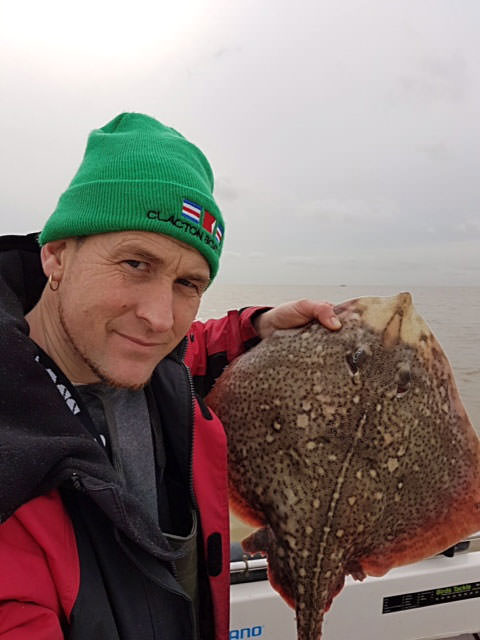 Martin Smyth with a ray from his own boat

The beaches in general have had an up and down week and the strong southerly wind has curtailed most ray catches this week, although on the occasion when the wind has dropped the thornbacks have returned. Dale and Todd Pegg headed for the open beaches at St Osyth on one of those calmer days and they reaped the benefits landing thornback rays to 9lb 10oz.

Clacton Pier has been fairly quiet this week with just the odd ray being caught plus still plenty of whiting, as have most of the Holland beaches with a few small thornbacks and whiting being caught.

Walton Pier has come into its own this week with the first of the rays being caught from the head of the pier, only small fish in the 2lb-4lb range but they will increase in size as the season goes on.  Dogfish are also being caught from all areas of the pier and squid baits will find you more fish.

The boats have struggled with the weather this week although there was a window on Saturday when the wind fell light.  The charter boat Sophie Lea took a party of anglers out and all anglers caught thornbacks plus some large whiting.

Sea Watch Charters out of Brightlingsea also had. a mega day on the rays with the party landing 40 thornbacks to 10lbs between them.

Clacton Boat club members also took advantage of the gap in the strong winds and Martin Smyth took his boat Dippa a mile off the St Osyth coastline and landed 12 rays to 10lbs plus some large whiting and pouting.

Ron Woolsey fished from his own boat Nick a Bit and he also caught rays to 10lbs and squid was the favoured bait.

The high tides for the weekend are Saturday 11.01am and Sunday 11.43am