With the transition from winter to summer species already underway, fishing has started to slow down for Skegness Pier Angling Club (SPAC) members, in recent matches held from local beaches. There was a very close result in Match Four held at Trunch Lane, with top Grimsby match-man Dan Jackson coming out on top, with 2 dabs and 9 whiting measuring 265cm in total, winning the Gordon Long Cup. Dan also shared the longest flatfish prize with Dave Burr, both with 27cm (7oz) dabs. Just a centimetre behind in second place came Wrangle’s Alan Steadman, with 9 whiting and a lesser spotted dogfish for 264cm. He also won the longest round fish prize with his dogfish, which hit the measure at 60cm (1lb 12oz). Grimsby ace Adie Cooper came in third with 9 whiting, measuring 179cm. 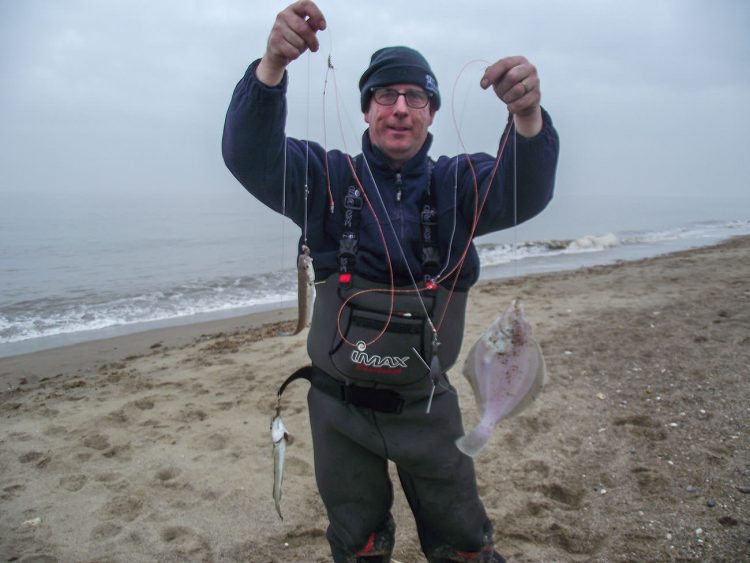 Match Five was back at Trunch Lane, with Grimsby’s Paul Denholm once again in scintillating form; winning the Ex-Service Cup with a dab, 7 whiting and 2 dogfish for a total length of 273cm. He also won the longest flatfish prize with his 30cm (12oz) dab. Just one fish behind in second place came his travelling companion Ian Nelson, with a similar 8-fish mixed bag for 252cm. Dan Jackson completed yet another clean sweep by Grimsby anglers, taking third place with a flounder, 5 whiting and a dogfish measuring 162cm. Dogfish normally swim in shoals of similar sized fish and so it proved on this occasion, with a 3-way tie for the longest round fish prize. Paul Denholm, Ian Nelson and Adie Cooper shared the prize, all measuring 62cm (1lb 15½oz) doggies.

The next SPAC match will be held on Saturday 25th March, from 2:30 till 6:30pm at North Shore Road, with Club members fishing for the Stan Marvin Cup. There is also an open section, which non-members are welcome to participate in. Current members are reminded that annual subscriptions are now due and should be paid before the 31st Mar, to remain eligible for Club member only benefits. For further information please contact SPAC Secretary Chas Tibble on 07984 967988 or chastibble@hotmail.com