What a weekend, the sea fishing was incredible! The quantity of good sized fish that were around was almost unheard of. Big rays, bull huss, smoothhounds, bass, plaice, whiting and dogfish along with the usual dabs and whiting, with the night tides producing the better catches. Ragworm and fish baits have been the best fished on a size 3/0 pulley rig.

Leyland and District Sea Angling Club fished their latest match at Mostyn North Wales where catches were very disappointing to say the least.

Only Alan Smith managed to find any fish as he beached two plaice measuring in at 36cm and 32cm to score 30 match points.

Thanks again to all 9 members supporting the match.

Allan Cordwell had an unplanned session fuelled by the kind gifting of surplus worm by Ryan Thompson who lives close by me in the sunny mountains north of the big smoke city of Manchester.

The beaches and pier had started producing and the Brucie bonus that Carl Dady and Stephen Lavelle had given me the nod they were also fishing the night tide was enough to mitigate my reservations of negotiating the M6 bank holiday traffic into Blackpool.

The North Pier was their destination and despite my travel concerns , the journey was clear and a parking easily obtained close by. 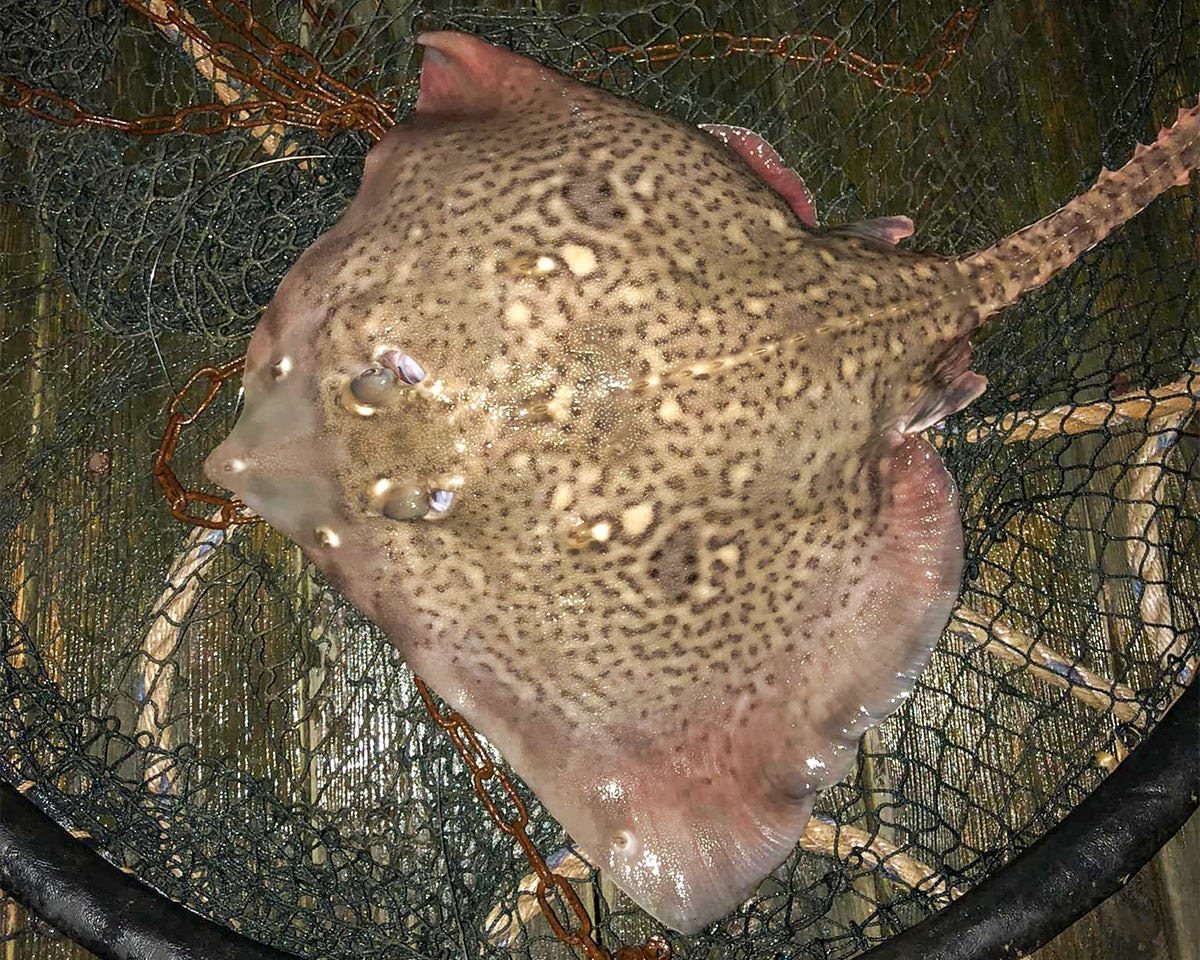 One of Allan’s rays

As Allan was setting up on the North side, Carl and Steve arrived and as darkness fell, the tide commenced flooding and he completed my timely bait preparations as the light failed. Rays were Allan’s chosen target for the night and large fish and squid wrap specials were the order of the day.

Two rods were despatched out to the channel with squid tipped rag and lug while he waited for deeper water . Whiting were the first to show together with an early ray for Carl and Allan followed suit with a nice thornback requiring the drop net to land. Then the rain came and all went quiet apart from the dreaded dogfish .

To counter the dogfish Allan changed baits to large squid and fish wraps on 4/0 -5/0 Pennels. Just before high tide, action recommenced with more rays in quick succession and Carl loosing a good huss at the pier base. All had been quiet for Steve but he broke into the activity landing a nice 9½lb huss.

The action stopped at high and was again broken by a number of dogfish. Carl and Steve had decided to head for home an hour after high water and Allan commenced a slow pack down. The wind had picked up and he was wet, cold and tired. As he went to reel in the last rod out, the line went slack and Allan wound into a final nice thornback.

A successful session with a total of six nice thornback ray, achieving the chosen target fish. A great night in good company despite the weather followed by an uneventful journey home. Thanks go to Ryan for the gifting of the worm and Jordan Russell for the frozen bait to make up the ray specials. 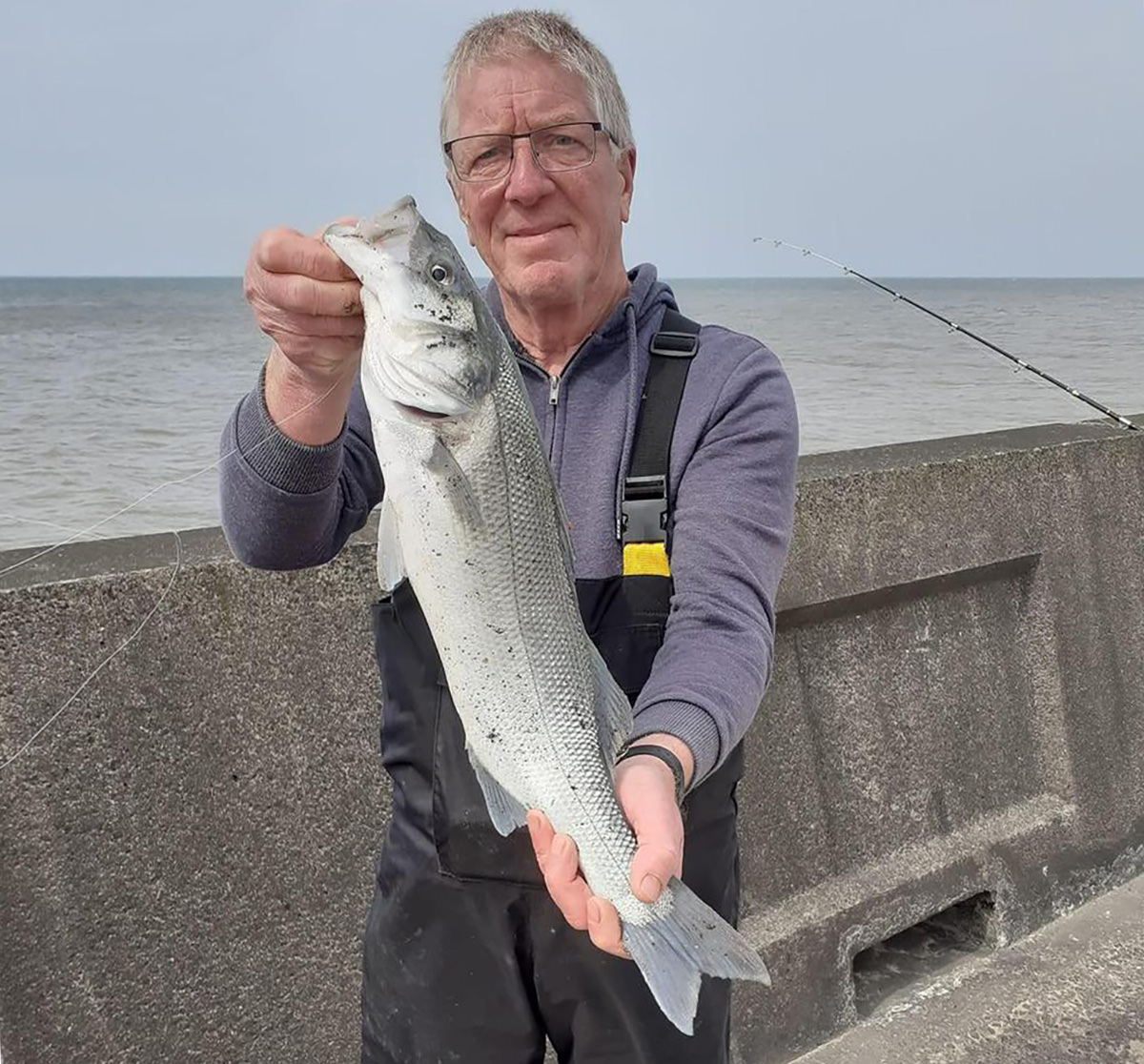 Trevor Barnett with a nice bass caught on Sunday

Huggies O’Connor used Bispham Angling quality bait on the Gynn Wall where he had a huge thornback, two dogfish, dab and a few whiting.

Dave Brown fished from just after low and part of the flood tonight using fish and squid baits. The first cast produced nothing but on the second cast he had a gentle slack line bite that resulted in a pair of small rays. After that he managed another two plus a whiting and a dogfish. What a brilliant night it was almost like summer.