Nice to be back to the beaches of Norfolk, the East coast of Scotland is spectacular and trout rivers are OK but they can’t beat a breezy Cart Gap on a Monday night.

14 gathered to fish, and we welcomed Robert Ford as a first timer to the NAC. There had been a bit of discussion in the week regarding the best venue for fishing an ebb tide, so we shifted from Sea Palling to Cart Gap, with fingers crossed. The early weather/tide report from Gus suggested a good bass beach with lots of small breakers, but the older hands (you know who you are) cautioned the optimism when there was a north easterly wind blowing. Would they be right? 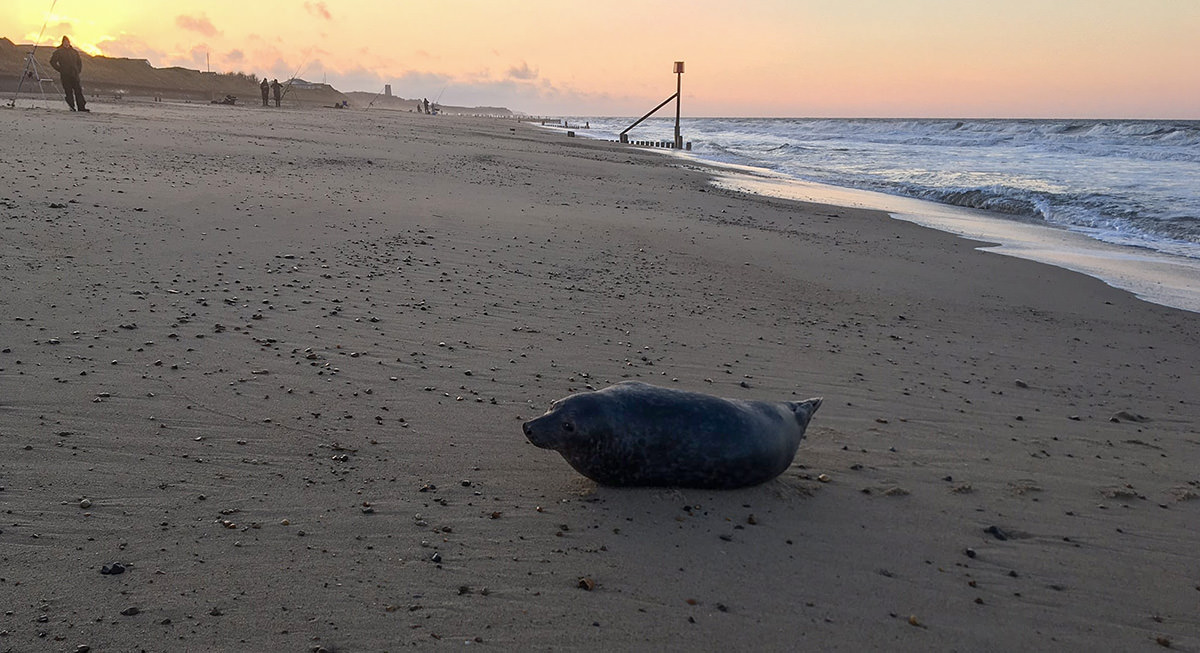 We pegged either side of the jetty to save the longer walk. Early signs were good with Allan Sexton (peg 6) a welcome returnee, picking up a 38cm bass on his first cast. Eamon (peg 10) then proceeded to pick up a 24cm dab followed by a 28cm dab. But then it went all flat.

Neil Rowe (peg 7) then met his new friend, a young seal who decided to watch the match from a peg 7 viewpoint. That finished Neil’s night. 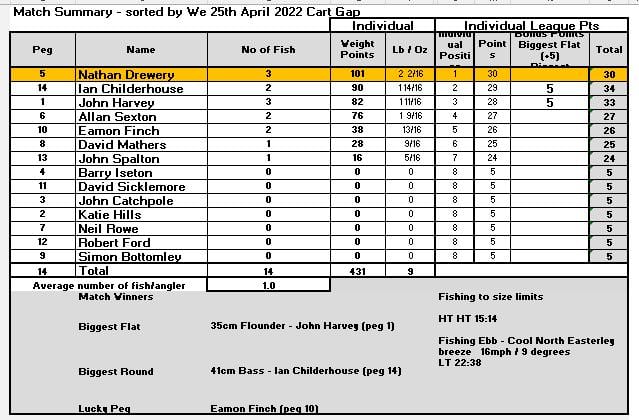 The tide continued to ebb, and chances of more fish seemed to disappear with the tide. So, the oldies were right. But there were some notable exceptions with John Harvey (peg 1) picking up biggest flatfish with a magnificent 35cm flounder, whilst Mr Consistent Ian Childerhouse (peg 14) picked up the biggest round fish, a 41cm bass. But the night was nudged by Nathan Drewery (peg 5) landing three fish for 101 weight points after deciding to wade out to Belgium to find the fish. The tide was so low it was no more than wellie depth 30 yards out.

Next week’s match will be on the sands of Becton with high tide at 20:29 hrs we will be fishing the flood.

Thanks to Nathan and John for covering match admin over the last few weeks, anyone else fancy a go?