The majority of the 28 anglers arrived at the Eastney Cruising Association on Friday night to register, catch up with friends and acquaintances and perhaps have a drink or two. The forecast for Saturday look pretty good with light wind and sunshine, the catch reports however were not quite so optimistic as it had been three weeks earlier when many hounds were caught as a by catch whilst bream fishing. Still there were hounds around to be caught. The scoring system was10 points for any hounds over 70cm and 5 points for any under that size.

27 of the 28 anglers arrived at Eastney for the first day’s fishing however one local angler, who will remain nameless, ended up in Southsea, still at least he said “sorry” for being slightly late. The weather forecast was spot on and the four boats left the harbour in search of the fish. The chosen area to start was the hard ground east of the nab Tower, a strange World War I structure that resembles a floating hotel from afar. It was a bit of a slow start in the shallow area so the boats moved into slightly deeper water to try to find the quarry.

Paul Milkins struggled to find a way of mounting the peeler crab to his hook but Ray Barron offered his considerably expertise, showing Paul his preferred method. This proved to be more than successful as Paul matched Ray fish for fish throughout the day. The crab was mounted sideways through the rear leg sockets, and then whipped in place by its remaining legs with the claws left loose; some anglers also cut the body to allow the juices to flow. Hook lengths were kept quite short with 3-4 ft of 50-80lb mono the norm. 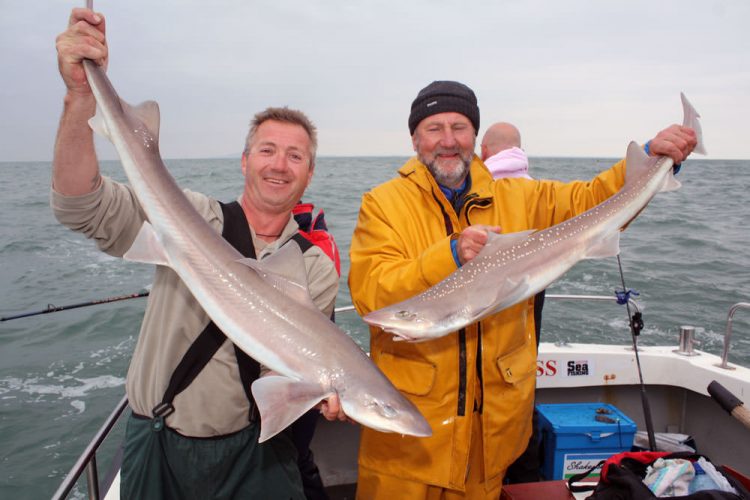 There were a total of 90 smoothhounds briefly detained to measure and record, after which all were returned to sea. Measuring the larger specimens for the count back system proved to be quite challenging, try laying a 90cm hound in a length of gutter and keep it straight for long enough to record the length. Over 100cm and a tape measure was required to record the total length.

The weather on the Sunday looked completely different from the previous day, the wind had changed direction and increased to force 4 with 6-7 forecast for late afternoon, no lying back enjoying the sunshine today.

The boats headed the Selsey Bank, a steam of around 20-25 minutes from port, where the water was quite shallow with the boat anchoring in depths of between 36 and 38 feet. The tide was none too fierce with 6-8 ounces of lead more than capable of holding bottom. Ian Mclean boated one of the smallest hounds I’ve seen for many years a fine young specimen of around 250-300mm long, still it added 5 points to his score.

Not too many hounds were recorded in the first hour so the decision was made to move the boats further offshore, the deeper water around Utopia proved a good move as most boats soon reported fish captures most of which were 10 pointers.

Other species were also boated including thornback ray, bass, pout, and bream. Several whelks managed to find the crab baits, some of which made a fine job of masking the hook point, this could have added to the number of fish dropped early in the fight.

Fight is a good description for these superb sporting fish, the larger specimens hugged the bottom, swam directly at you, kited off to either side of the boat, headed under the boat, took line or a combination of all these. A few even swam out of the net just as the skippers tried to lift the fish aboard; Ash Currier lost an estimated 18-20lb specimen when it powered out of the net, tangled other angler’s lines then headed for freedom. 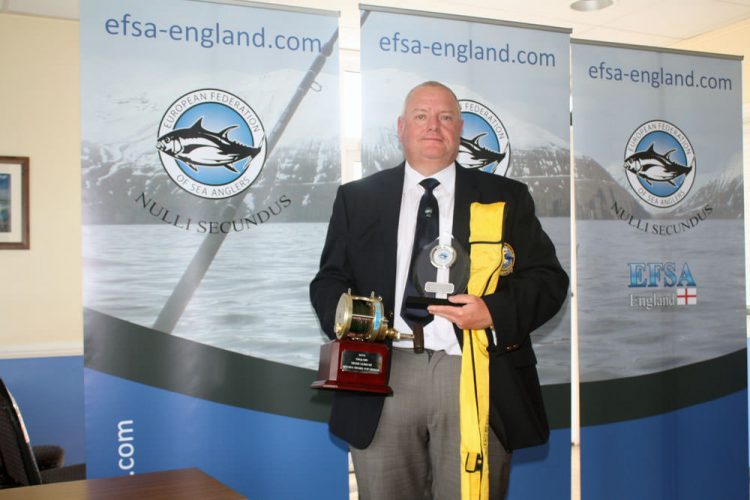 Glen Milligan (the boat commodore) managed to find plenty of fish to secure top boat with an average of 111.71 points per angler.

Many thanks to Matt & Ray for securing the superb bait plus all those who helped keep, separate, freeze and count the crab.

Thanks also to Eastney Cruising Association for the use of the facilities, the skippers for the tea, coffee and finding the fish.