Holyhead charter skipper, Gethyn Owen brings you news of the latest boat catches on ‘My Way’ and crosses his fingers for more huge smoothhounds in the weeks ahead.

A desperate April, weather wise, ended with our thoughts turning to the influx of the quality smoothhound, normally associated with My Way outings during May and into the best part of June.

As it turned out we didn’t have to wait too long, the boat was booked on Wednesday 9th May by Graham Hinchliffe from Chester, for some early season action and looking to find some fish for his colleagues who were eager to get afloat for their first boat fishing session ever. 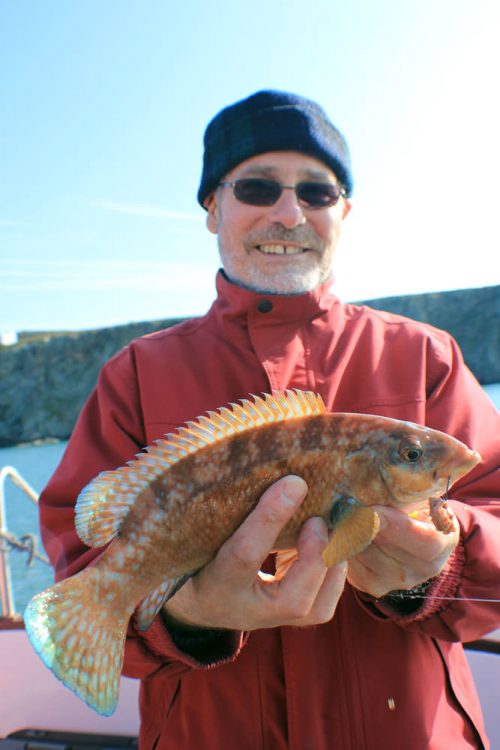 With a typically poor forecast the lads enjoyed a good morning with plenty of variety coming to the baits: dogs, whiting, plenty of dabs, and wrasse with a sprinkling of coalies and pollack. On both our anchor marks, the fish kept biting for all the crew with some of the whiting making very good sizes for the time of year. On the mussel beds we also had a few spotted rays break the continuous bags of dogfish, whiting and codling.

To end the day, we had decided to spend the last couple hours trying for a few smoothhound. Gareth on Spindrift had landed the first of the season for Holyhead the previous Sunday.

After an hour of inactivity, Graham was sitting near the cabin enjoying a cup of tea and biscuits, when his rod on the stern arched over and line started screaming from his Abu 7500 reel. Quickly on the rod, Graham lifted into the smoothie and for the next 25 minutes battled against what looked to be a very good shark! When the smoothie broke surface, it certainly did look a good one, having taken nearly half an hour to land and with the fish swimming around other lines, we had quite a tangle to contend with. 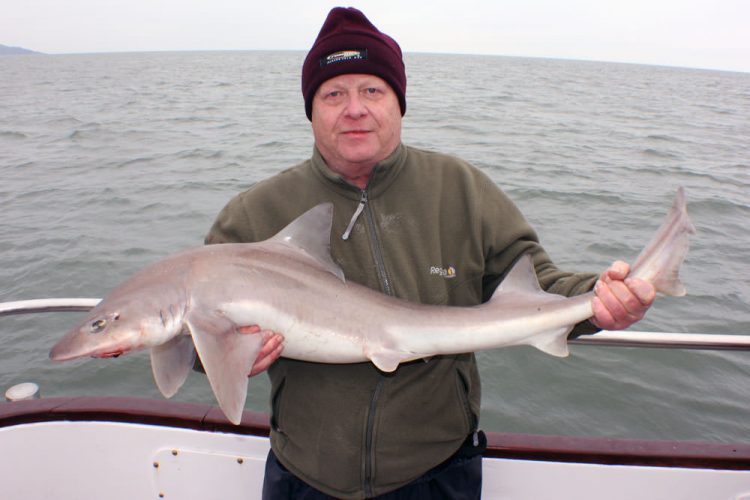 The mass of line was quite fortunate to be honest because when I reached over with the net, I slipped and dropped it in the water much to the amusement of all apart from an anxious Graham. Thankfully a couple lines snagged onto the neck of the net and I managed to retrieve it, albeit a little sheepishly.

Smoothhound safely in the net and now aboard My Way, it looked massive, we grabbed the weigh sling and our new calibrated scales, so far unused on anything into double figures. Graham’s smoothhound topped the scales at 20lb 6oz, a beast of a fish and what a superb weight to start our 2012 adventures.

We landed another hound of 11lb and dropped a couple others; hopefully this is the start to another excellent smoothhound season aboard My Way.