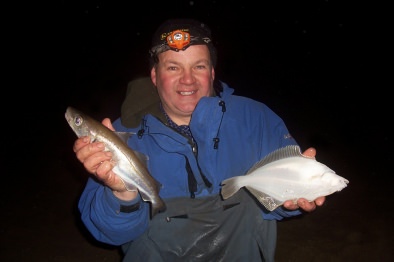 Anglers had to endure strong winds, driving rain and a weed filled sea in the latest Skegness Pier Angling Club (S.P.A.C) match held at Trunch Lane. Banging baits out with his Harrison Torrix P2 and one of the brand new Daiwa 7HT MAG ST reels Woburn’s Dave Shorthouse made the best of breaks in the inclement conditions around slack water, catching two double shots of dab and whiting, to win with 2lb 0½oz. Dave also won the heaviest round fish prize with a 12oz whiting and took an equal share of the heaviest flatfish award with a 12oz dab.

Kettering based Jim Robinson was the other angler sharing the heaviest flatfish award, also taking second place with two dabs weighing 1lb 0½oz. SPAC stalwart, Mo Fendyke from Boston, stuck to his task right till the end and was rewarded with third place for a double shot of nice dabs weighing 13oz. A single dab was enough to see Paul Coulthurst take fourth spot.

The SPAC AGM will be held on Saturday 19th February, commencing at 7:30pm in the New Park Club, Scarborough Avenue, Skegness. All current and prospective members are invited to attend. The annual Trophy Presentation and social event will take place immediately after the AGM, including a grand raffle and buffet.

The next SPAC match will be held on Sunday 20th February from 11am till 3pm at Winthorpe Avenue, Skegness, with Club members fishing for the AGM Cup. There is also an open section, which non-members are welcome to participate in. For further information please contact SPAC Secretary Chas Tibble on 07984 967988 or chastibble@hotmail.com