Alderney tackle shop owner Mark Harding embarks on a 12-month fishing mission to notch 50 species from shore, boat and kayak. He will target different fish each month, and January’s experiences ensure he is under no illusions about the difficulty of the task. 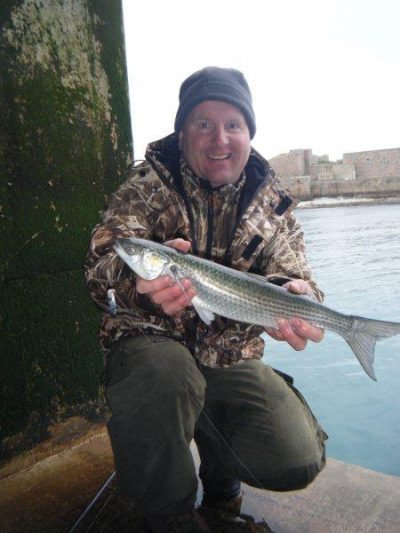 I have loved the sea and fishing in it since my earliest days on the south coast of England. Perhaps strangely, actually catching fish is only part of what has become a lifelong deep affection, with the tranquilly of open spaces, passing wildlife, beautiful sunsets and stunning dawns all parts of a bigger personal landscape. Call it a near narcotic mix of moving, changing, often unpredictable natural ingredients that allow me to bask in a fabulous form of loneliness that is to be treasured.

I have sampled most forms of sea fishing, and obsessed on a few, but since moving to Alderney seven years ago my main focus has switched from a largely competitive shore interest to a more adventurous one intent on rooting out bigger fish; spliced with an almost hedonistic compulsion to enjoy as many different species as possible.

Alderney is rightly famed for quality fish across an impressive array of species. Indeed, in my time here I’ve topped almost all the Harding personal best fish from a previous life fishing the Hampshire, West Sussex and IOW shorelines. The numbers of fish around Alderney can be incredible; so much so that those of us fortunate enough to live here are sometimes guilty of taking things for granted in a somewhat blasé ‘been there, done that’ sort of way. In 2010, with most of my island targets met, my fishing mindset and dedication uncharacteristically wobbled towards casualness. Malaise had dragged me into a lethargic place and threatened my once unflattering appreciation of much that is precious.

Aware of a need to freshen my perspective I set about identifying a fresh focus and new set of personal fishing goals in 2011. I would endeavour to catch a not unrealistic total of species locally, with a plan to chase particular ones each month throughout the year. I could fish from the beach, rocks, harbour, boat or kayak using all manner of methods, baits and lures, and push myself to what I hoped would be a grand annual total of more than 50 different species from Alderney waters.

My species hunting inspiration followed a bit of fun on the  beach and boat forum where members reported and tallied all species caught during the year. I became involved, was miles behind at the June midway point, but kicked on latterly to top the league by the end of year. I found that deliberately targeting specific species snapped me out of my lethargy and made me want to get out fishing when I otherwise might not have bothered.

Alderney is around three miles long by a mile wide. There is no driving down the coast 50 miles when the smoothhounds arrive then deviating 50 miles in the opposite direction when it’s whiting time. There’s no estuary fish or mud marks either, so there are many less options than might be realised. Anything like 50 different species from Alderney waters really is a challenge, demanding lots of planning, hard work and plenty unsocial fishing hours as my first month exploits have proved. 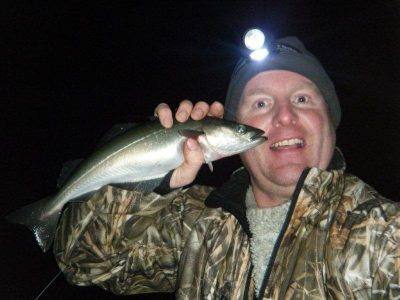 January is a month when many species start to disappear and catching is hard work. My experience is that there are no January guarantees and the bulk of any effort is best spent early in the month. Take last January for example when I failed to catch the expected thick-lipped mullet, red mullet and cod. I also missed several easier species due to complacency, so the plan this time is to tick off as many species as possible early in the campaign in order to concentrate on difficult targets like blue and porbeagle shark and undulate ray later. My rules are simple… rod and line only, both types of smoothhounds count as one species and I will include cuttlefish and squid as they are legitimate lure fishing targets on Alderney.

Initial January targets included sole and red mullet, but these were dropped on the strength of feedback from local anglers and netters. My main attention switched to the various rockling and small-eyed ray. The month started brightly with a day/night session on the breakwater when I managed seven species. None of these were spectacular, but I was delighted to have scored a lucky bonus with a scad.

My next night session a cliff mark called the Volta, involving a short walk and steep clamber down, with the last 20 feet daggling on a rope. I wanted a smoothhound, which are never prolific and tend to come incidentally when fishing with squid baits for bass or rays. I had some frozen peeler for hounds and hoped it might scratch me a few other species. The session was lively and included black bream, pout, and poor cod, which I had already scored. I managed a lesser spotted dogfish followed by a small hound taken on the crab. Disappointingly, no other species were caught but I still had 363 days to go!

A session around on the harbour quay tucked out of the wind and rain was next. I hoped to draw thick-lipped mullet and perhaps a mini species or two using an onion sack filled with mulched fish offal tied to the ladders. As the tide increased I altered the length of the rope to make sure the sack was always dapping the water and dispersing the contents. 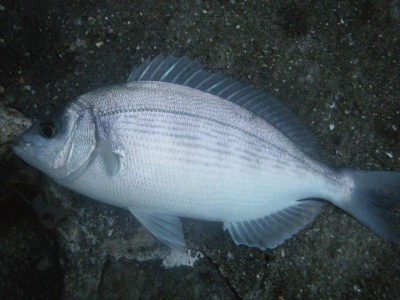 I used a float on one rod close to the sack, while on a second rod I opted for a long three-hook flapper rig with sliding rubber stop knots so I could quickly alter hooklength positions. The idea behind this rig is that the bottom snood remains anchored on the bottom, while any fish ‘climbing’ the wall would find the upper hooks. The body and snoods were suitably light and hooks were sizes 6. The real possibility of wrasse to over 6lb and mullet and bass in to double figures from this mark quashed any temptation to scale down further.

Things began quietly with a couple of tompot blennies and a ballan, which I had notched already. A garfish added to my species tally, but the real bonus came in the shape of an unexpected golden grey mullet. I knew the fish working around the onion sack weren’t thick lips as they were feeding on the groundbait but ignoring my bread hook-bait. A change to mackerel bait brought an instant hook-up, and a golden grey was netted a couple of minutes later.

Several early morning 4:30am sessions for small-eyed ray didn’t produce, while in the evenings I concentrated on rockling. The shore rockling was easily captured, but three and five-beards were not caught… although, I did hook and then foolishly drop a three-beard. I was fishing gale 8 conditions in driving rain on top of the inner harbour wall. The three-beard was around 2lb in weight and rather than use the drop-net I lifted and it fell off. Worse followed when my mate Rob Blondin called to say that he had just caught a small-eyed ray. In similarly harsh conditions over the next couple of days, I did add pollack, a giant goby and squid to the January tally. 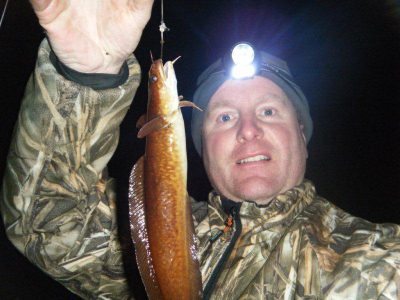 The next decent tides saw me refreshed and raring to go. A short session on Platte Saline beach for red mullet and five-bearded rockling proved fruitless until a bass on the final cast upped my total to 16 species. My ears pricked up the following day when I was told that an angler from Bristol had caught a plaice. I didn’t waste any time in grabbing my gear and some fresh worms before dashing to catch the last of the daylight… and a good decision it proved to be. My first chuck was rewarded with a plaice and I couldn’t have been happier. The next few hours brought several bass and alerted me to some mullet working around the rocky end in darkness.

I returned the following night, putting a rod out for three-bearded rockling, and another to float fish for thick-lipped mullet. I forgot to pack a Starlite for attaching to the float, and resorted to holding the rod and feeling for bites whilst haplessly trying to track the bobbing float with my headlight… what a plumb! I made a hash of the only take that I could detect and moved to the quay in search of smelt.

The smelt were there and I threw in some groundbait, which only served to spook them. I fished on with size 16 hooks nevertheless. Early missed bites were followed by two small pollack, but persistence was soon rewarded with a coalfish! Thinking it a small pollack, I chanced lifting it up the wall… and got away with it. The smelt refused to play that night but I was back the following evening and bagged my smelt in a blink. Further sessions for the rockling and ray proved a waste of time. By the end of January I had totalled 19 species, which sounds great but is to be expected really. I am a little disappointed to have missed some early targets but I’ll have opportunities yet. 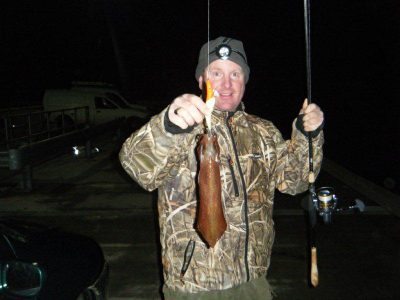 I am sure that I’ll learn an awful lot over the coming months and I look forward to what’s in store. February and March are always quiet around Alderney but I’ll endeavour to pick out as many more species as I can. My plan is to concentrate on small-eyed ray, three-bearded and five-bearded rockling, but I’ll be alert for sign of red mullet and perhaps sole. Red mullet catches were poor last year, and early February tides are likely to be the only remaining chance of success until the autumn. Thick lipped mullet will be another target, and I will also fish marks frequented by undulate rays.