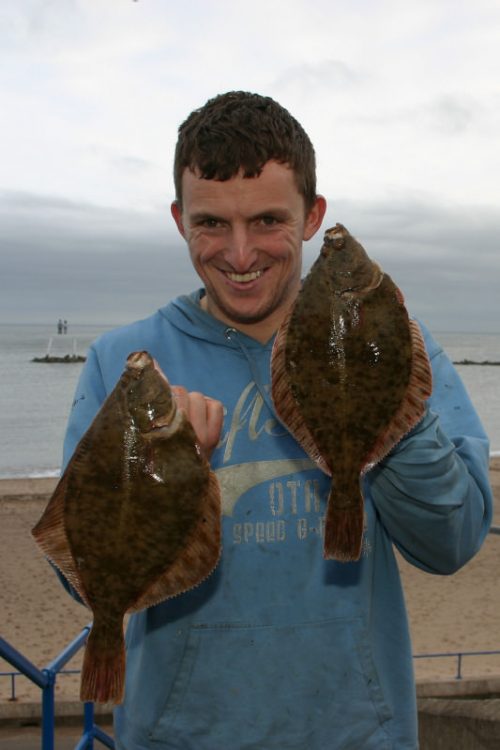 The memory of Barry Tweddle, who sadly died at a very young age taking part in the sport he loved, was honoured at Barry’s memorial match fished on Jan 23rd 2011. The match provided the biggest turnout, four hundred and twenty seven, for an open for many years.

Mustad honoured Barry by awarding the match their magnificent Gold Hook, only the second time the coveted hook has been awarded to an event in the UK. The plaudits hadn’t finished even then as Trevor “Doppa” Ferry, who won the event with eleven flounders from Warkworth Beach for 11lb 1oz 10dram, dedicated his win to the memory of Barry.

Unfortunately with the calm conditions flounder were the target for most of the anglers who packed Warkworth Beach. However Tony Rutherford headed for the under rated Blyth Beach and came up trumps going from hole to hole. Tony landed eight quality flounder to take second place and win a fishing holiday in Iceland with a weight of 9lb 12oz 10 dram. He also topped the list of 2lb plus flounders with a fish of 2lb 6oz 6dram which lifted the heaviest flatfish prize.

The codling were scarce with on 16 being landed during the event and a fish of 5lb 1oz 4dram landed by Ian Hall of Alnwick AC while fishing at Beadnell was enough to lift the £500 prize for the heaviest fish of the competition. Adam Johnston had the second heaviest fish, a cod of 3lb 15oz 8dram.

Dawn Hood won the ladies section with two flounder for 1lb 14oz 2drams. It was very close in the junior section, where all juniors who caught fish were given a prize, Ross Lansbury taking this section and £100 for his three flounder weighing 2lb 12oz 14dram. Ayton Stewart was one of the few who landed a codling taking second place with a weight of 2lb 7oz 8drams followed by Conor Spratt with 2lb 2oz 10dram.

Although the match was a fantastic event, which saw £600 going to the Blyth all weather boat on the day, who’s crew tried valiantly to find Barry in some very rough conditions. Everyone agreed it was a match that they would rather have not taken place and Barry was still with us.

Of the 400 plus anglers who fished the event 108 brought fish to the scales for a total weight of just over 260lb.

Lure fishing from the shore on La Palma