The afternoon Gus Report showed a gin clear sea, no weed, weather excellent 14:04pm with the comment, “Like a mill pond, see what happens later” so I guess expectations were high as each angler prepared their tackle at home ready for a trip to Gt Yarmouth North Beach. Little did we know, by the time we gathered the squalls had arrived, and everything became a little soggy to say the least.

We welcomed new members Gary and Mel Alexander who arrived in the middle of a really heavy squall, with little time for introductions and welcome. Nathan volunteered his services to show them the ropes. With the board walk providing direct access to the beach, we pegged either side of the board walk hopefully reducing walking distance for all. So, in the tail end of the shower, we prepared to cast off at 6:45pm, fishing to length with hopefully a few doggies over 38cm or smoothhounds over 51cm making an appearance. 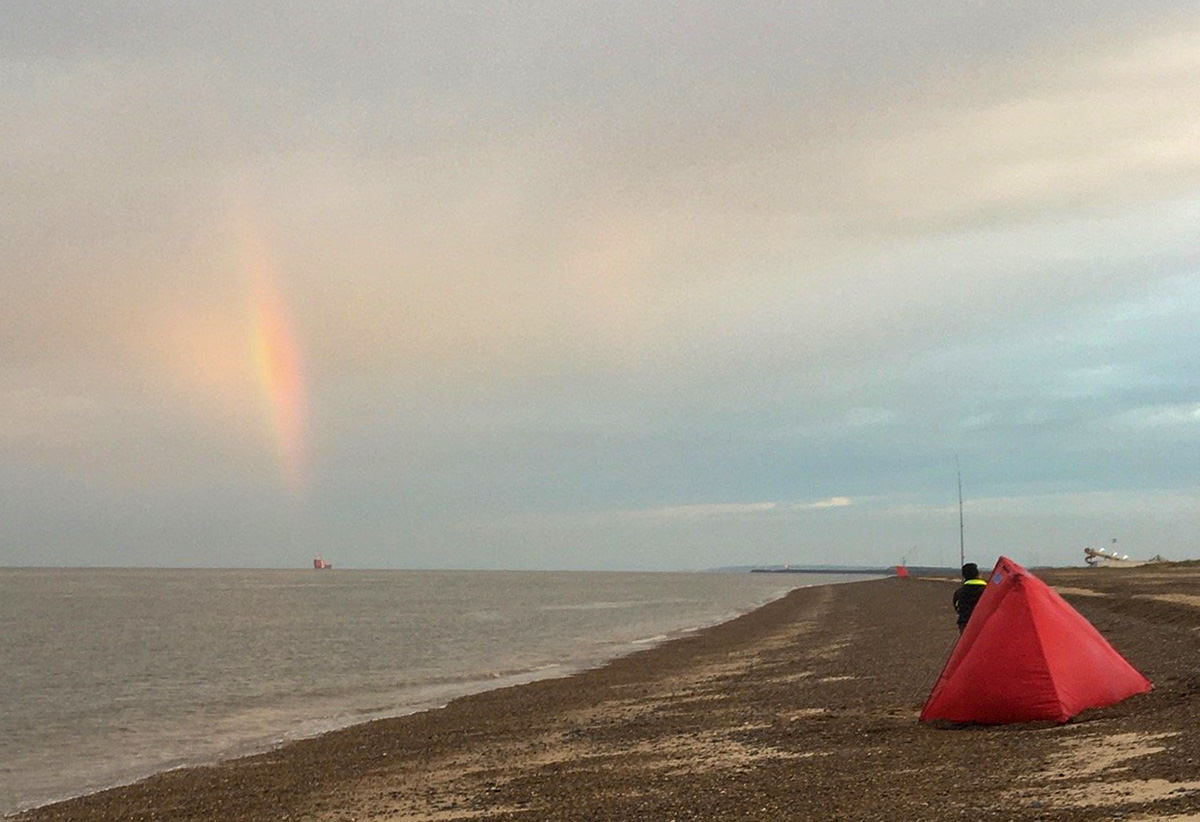 As the weather subsided, everyone made their initial casts, immediately finding that the tide was taking the trace and when the rigs were retrieved it was very vegetarian, lots of weed. The “GusOmeter” was wrong cloudy/weedy/strong tide. Then weather began to lift, and we could see the wind farm and quite an impressive rainbow. The older hands mooted that fish would appear once the tide had ebbed further. And so, it happened fish started to appear, and the weed started to drop off.

Target for the night was hopefully dogfish and smoothhounds, and as the tide ebbed the first doggies started to be caught with a few sizeable hounds. By the end of the night 107 fish of size caught an average of six fish per angler with no one blanking – well done Gary & Mel (pegs 2 & 3) on your first match. 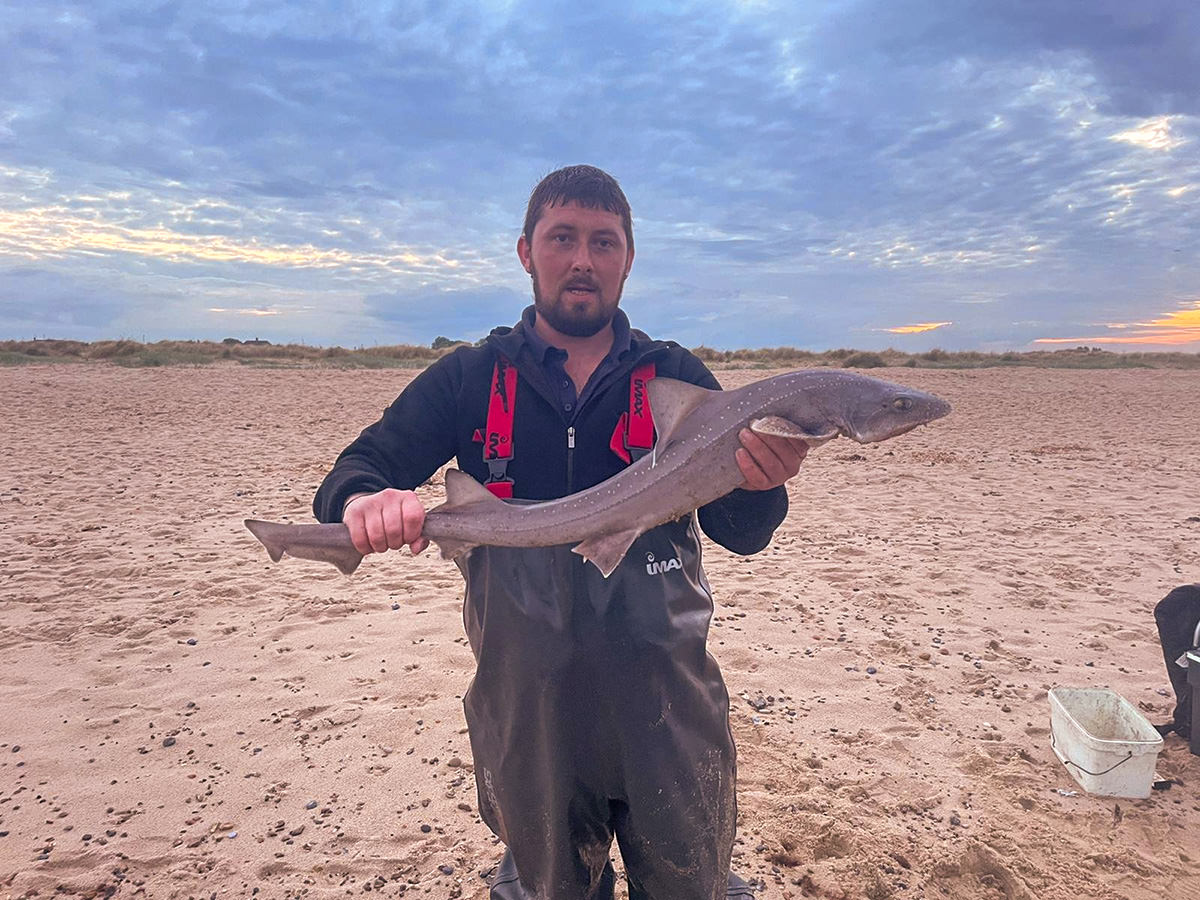 Nathan with his hound

In summary we picked up 20 dogfish of various sizes, two smoothhounds, 80 whiting, some of a decent size, a 35cm plus fish fell to John Harvey. But the biggest smoothhound of the night went to Nathan (peg 1) with a 92 cm specimen, just pipping Jamie Childerhouse with an 82 cm on his last cast (peg 20). A special mention to Michael Craske in picking up a 26cm dab. 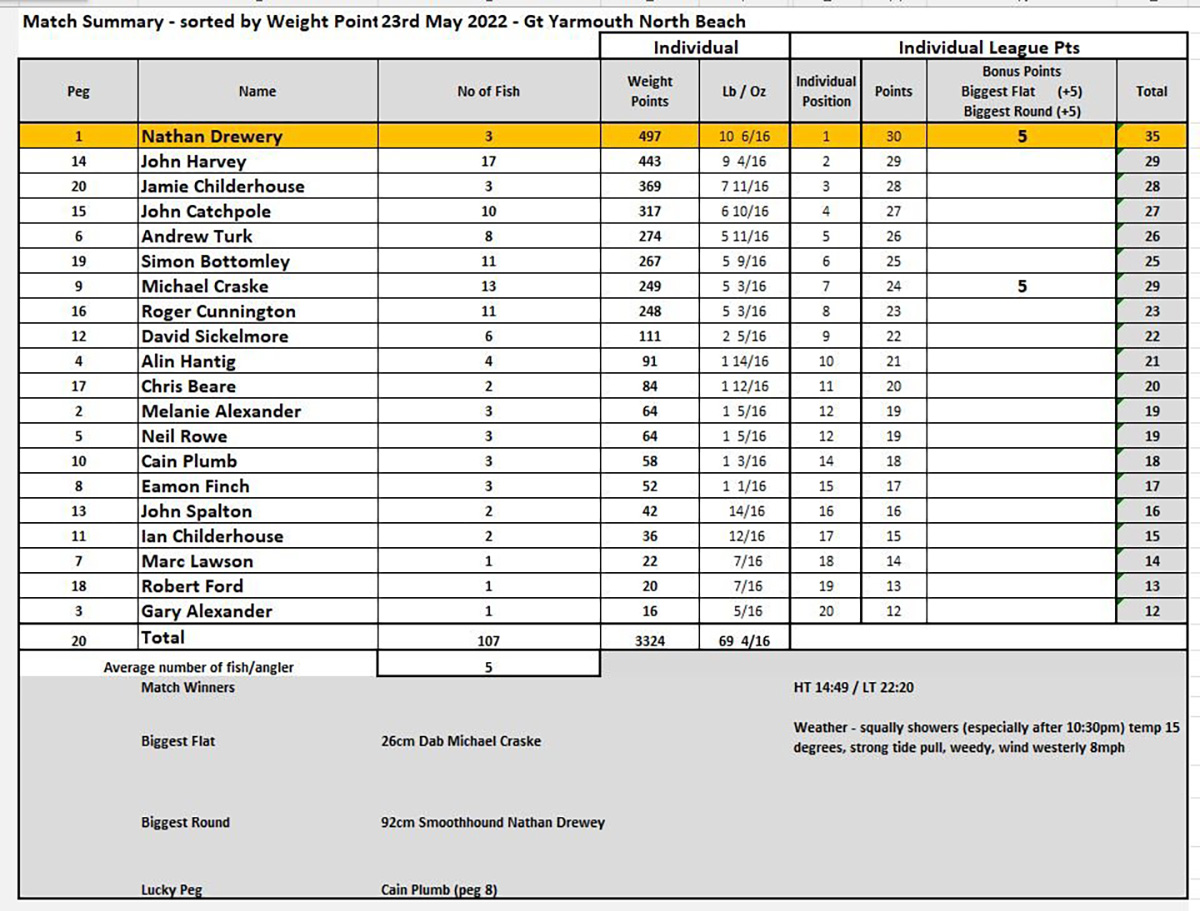 A fine night’s fishing (in the end) was spoiled by a cloud burst as everyone was packing up and results were being compiled, so well done all who fished and fought their way through the weed, and finally the rain. See you all next week at Salthouse, lets hope the weather behaves itself.

Next week’s match will be back to the shingle of Salthouse with high tide at 19:35hrs we will be fishing the early ebb on the left hand side.