Great Yarmouth as a venue is a bit like marmite, you either love it or hate it, while it has been known to throw up big catches it can be snaggy and is very dependent on your peg. So it was with some trepidation that the pegs were drawn with the “short walkers” taking pegs close to the Travel Inn beach passage way with the lower numbered pegs towards the pleasure beach. The numbers fishing at Great Yarmouth can be a bit erratic so it was great to see 14 anglers booked in and fishing the venue, especially with the price of fuel! A special welcome back to the NAC of Norfolk’s own star rod builder Cain Plumb.

With everyone ready to hit the beach early we called a 6:30pm start as with an ebbing tide (LT 22:23pm) we wanted to take advantage of the deeper water. As usual fishing to size – see species and number of fish and their size limits chart. Tide was pulling towards the pleasure beach end with the southerly wind adding to conditions. The big hitters (casting) started to pick up good size whiting 30+cm and started to put fish on their cards, and with some early dogfish and smoothhounds it was looking to be one of those nights. It was clear early on that the action was at either ends of the beach, see catch summary/peg chart.

In total 111 fish caught, giving an average of eight fish per angler, with six separate species caught. Despite the lateness in the year, we are still seeing sizeable whiting carded. In total 94 caught and carded, the biggest of 35cm being carded by John Spalton (peg 2). Along with the whiting, three dabs, five dogfish, seven smoothhounds of which a 92cm specimen caught by Cain Plumb (peg 13) picking up biggest round of the night, one ray and a 30cm flounder, giving John Harvey (peg 4) biggest flat fish of the night. The best fish photo of the night goes to Roger Cunnington’s under sized ray.

But the story of the night goes to the winning return of Cain Plumb (peg 13) to NAC Monday night fishing, while only catching five fish he amassed 1028 weight points (21lb 7oz). Clearly sizes matter! Second place fell to Roger Cunnington (peg 3) who picked up 484 weight points, and was unlucky with his ray. In third place was John Spalton (peg 2) with 400 weight points helped by some impressive size whiting, that helped his bad back. 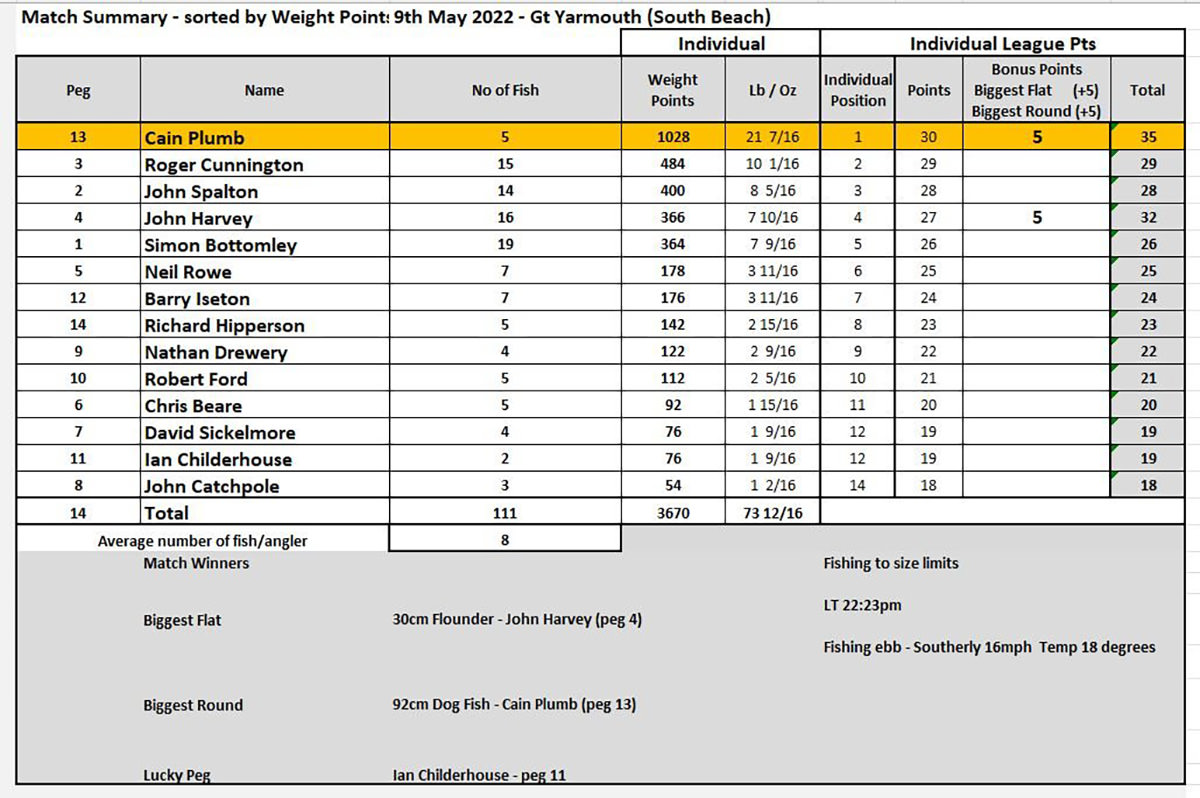 A cracking nights fish with no one blanking and an average of eight fish per angler. But the results speak for themselves, well done Cain.

Next week’s match will be Weybourne fishing ebb tide with high water at 19:27hrs.

Double Figure Bass And Hound Off The Lancashire Shore