Sixteen anglers arrived to fish for the Gordon Long Cup at North Shore on Sunday. Conditions were poor in a moderate Easterly wind with a three foot surf and a steady light rain for much of the match.

The fishing started slowly for most with a flurry of small smoothhounds, dabs and whiting. The number of bass steadily increased throughout the match with Adie Cooper and Kevin Warner catching first, then Ian Nelson and Paul Marshall hooked and lost a good bass each. The bass bites accelerated in the last hour with many nice fish coming out in the pegs to the left of the car park and the right end peg. 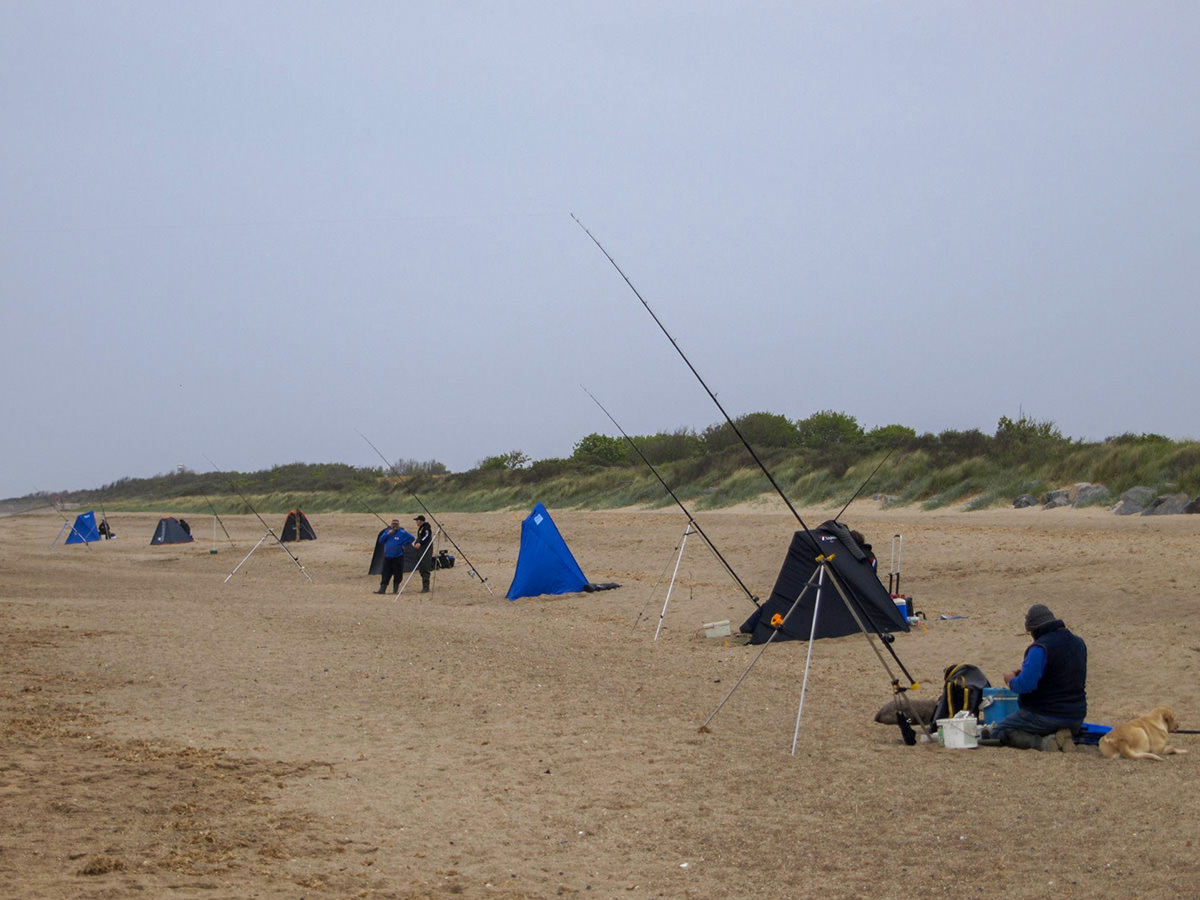 Early into the match the smoothhounds stopped biting all together but the dabs and whiting continued to feed throughout.

First cast Adie tried three different baits on a clipped down rig blasted out far: worm, sandeel and a small peeler. Within minutes of casting, he had a smoothie pup on the crab, so he re-cast the same rig and had another on the worm. He hadn’t even had time bait another rig, so he cast the sandeel out again whilst he baited up. However, he saw his rod fall slack so he reeled in and hit the bite and a nice bass hit the beach. Three fish on the same rig in three casts as he didn’t have time to bait up. 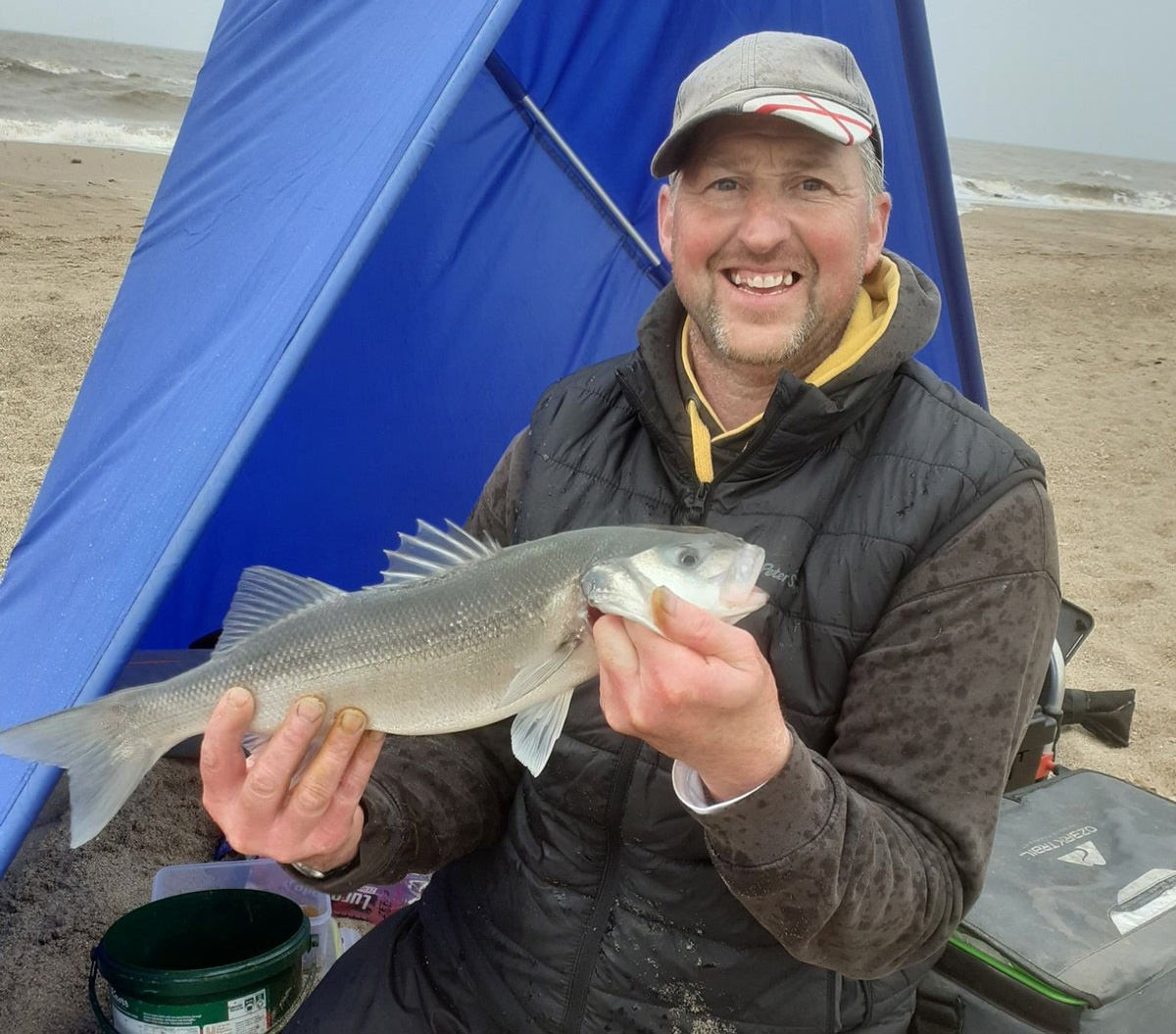 He therefore went flat out at that distance and using all baits he had and caught bass and dabs non-stop, for most of the match. Giving him a fantastic 662 cm and first place. During the match he unfortunately had a run from what he thought was a hound but turned out to be a big bass estimated at 6-7lb which came to the top, rolled on the trace, and came off.

Lee travelled down from Hull to fish his second ever Skegness match and despite a slow start up to high water he earned second place with a late run of fish in the last hour of the match. In the mad last hour, Lee was running up and down the beach casting and reeling in double shots of bass and good whiting with bites coming as soon as the rig hit the seabed. 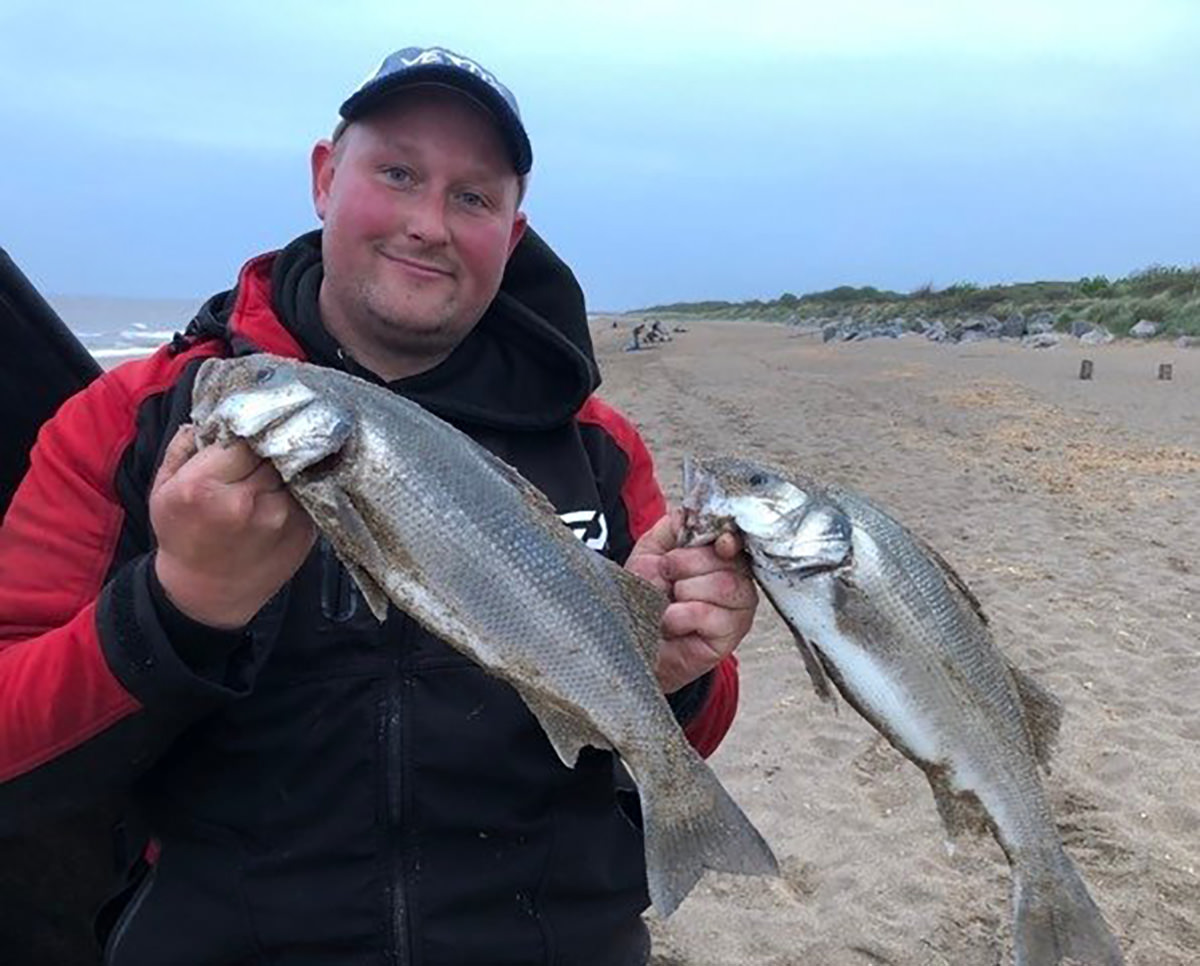 Lee Smith had five bass in the last hour

He ended up with 449cm including five decent bass, dabs and whiting on slaps (black lug) tipped with white rag. All at long range in an impressive display of speed fishing making the most of the bass shoal when it was in front of him. Well done Lee and great to meet you.

Renowned flatfish angler Dave Shorthouse had planned to fish lug for dabs in the match today but believed, looking at the conditions, that the dabs wouldn’t feed so well in the rough sea. He tried crab first cast resulting in whiting and a small smoothhound. The smoothies soon disappeared so he switched to lug and started hitting double shots of dabs. He got his head down on the flats catching 16 fish for 388cm, alternating with a crab bait for a bonus bass. The bass didn’t reappear on the ebb for him but to the pegs either side, so it was flats only for Dave and a well-earned third place including the longest flat with a 31cm dab. 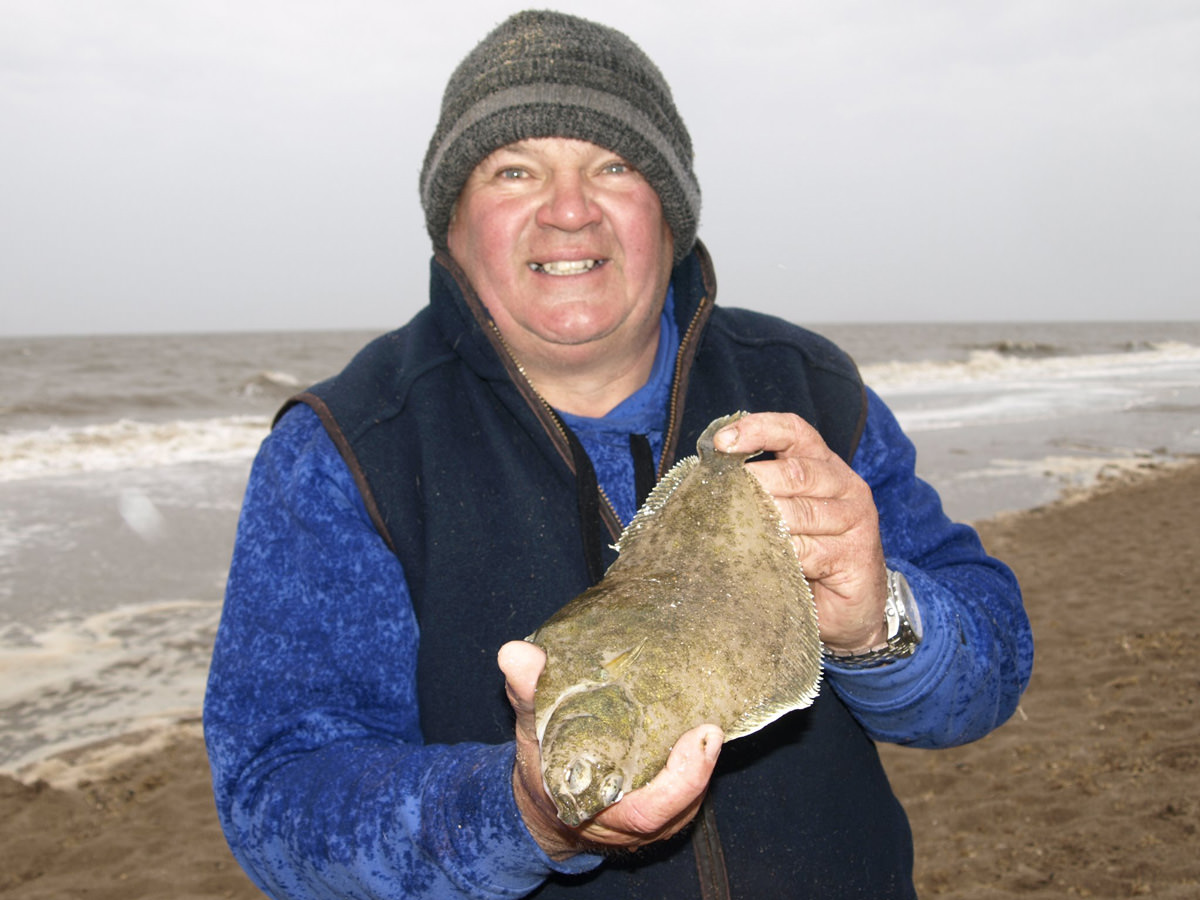 Dave Shorthouse with the longest flatfish

It was great to see juniors Hunter and Harvey Leighton fishing the match with their mum and dad Richard. They caught a couple of nice fish each which were an eel each, a bass, and a weaver. Very well done lads on showing dad how its done. Mum Deanne also caught two fish for 71cm.

The rest of the field was lead by Kevin Warner who had travelled all the way down from North Yorkshire to fish. He narrowly missed out on the prizes with a very respectable 255cm including two nice bass. Shaun Bullock travelled with Lee and ended up 7th. Ian Nelson also had a nice bass and the best bass and longest round fish landed was caught by Paul Denholm at 57cm. John Spalton despite a continuing bad back pain managed 8th place with 123cm of flatfish. 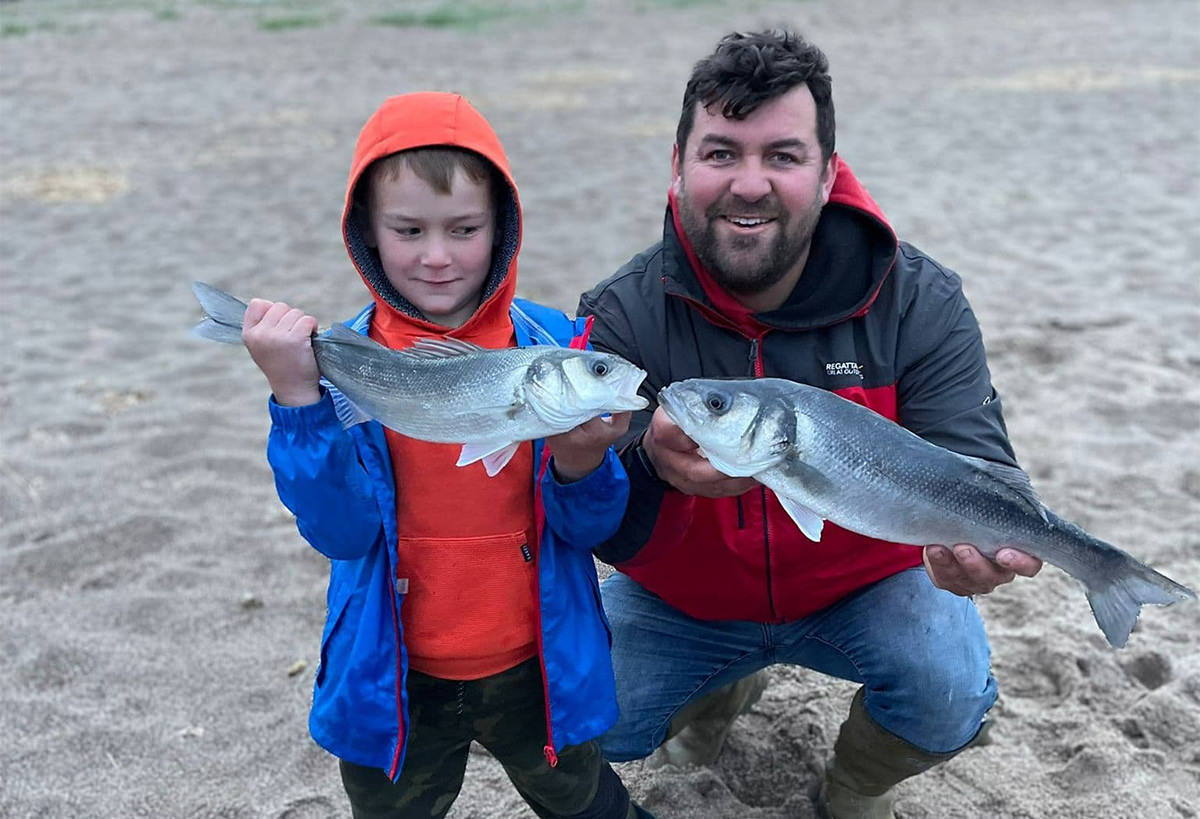 Hunter and Richard with a pair of bass

Many thanks to all who fished especially to those travelling long distances with many other matches on this weekend the turnout was still healthy and almost everyone caught fish. 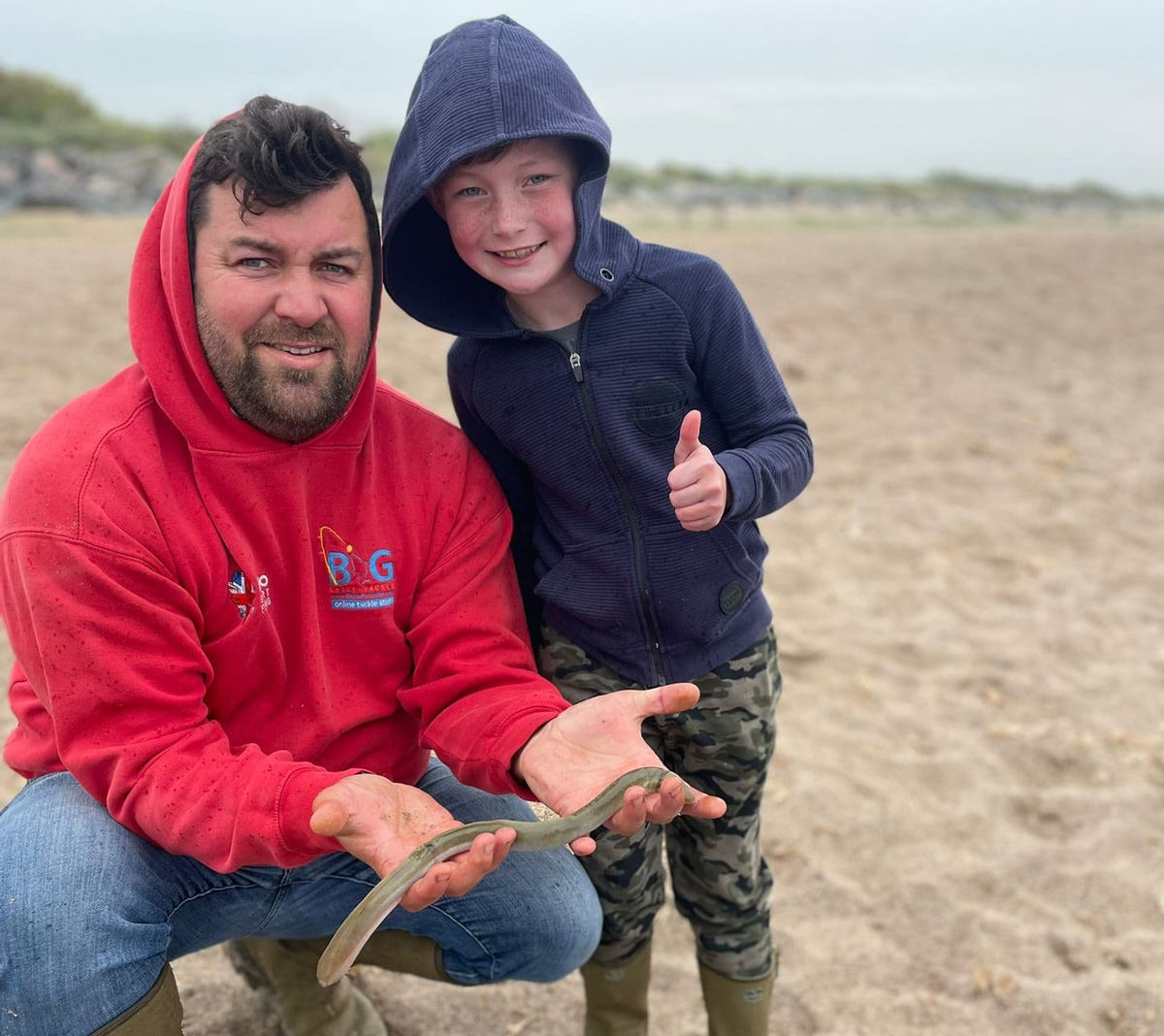 Harvey and dad Richard with a nice eel

We look forward to seeing you all at the next match on the 28th of May at Trunch Lane. 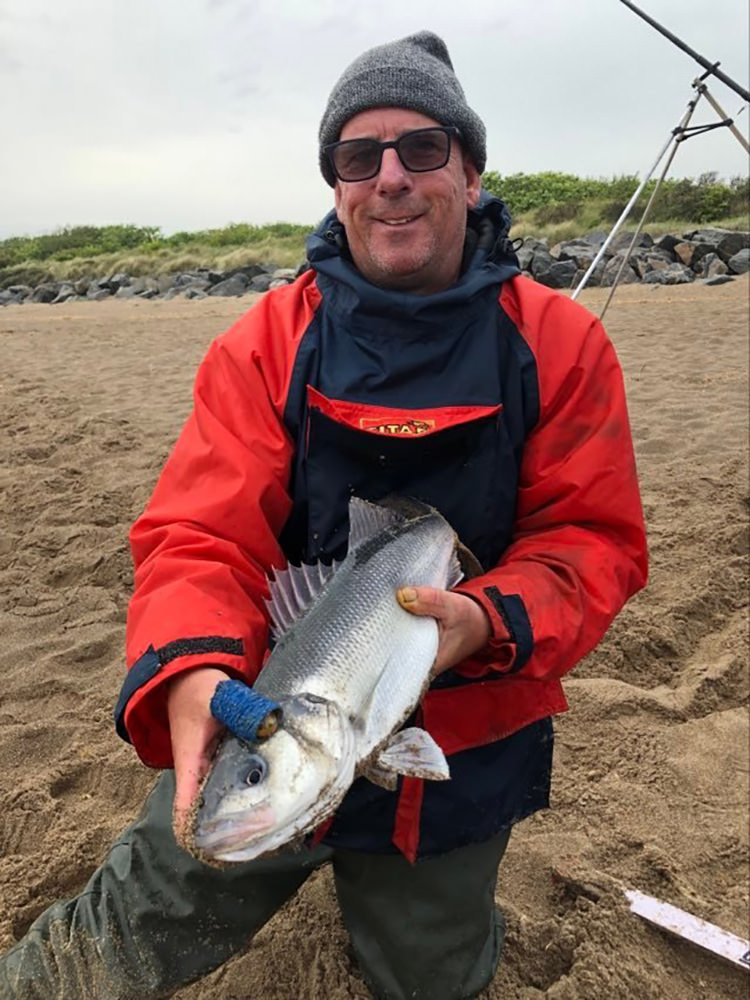 Paul Denholm with the longest round fish a bass of 57cm