It has been a bit of an up and down week for anglers; the calm weather continues, which is great for the boat fisherman, but it has also slowed the fishing down somewhat, with some boats reporting good catches of cod and thornback rays and others struggling to find cod. What we really need now is a good blow for a few days to stir the sea up and get those fish interested in feeding again, and hopefully we will see some double figure cod appearing before mid-November.

The boats that did take to the water this week have had mixed results. The Walton charter boat “Misty Lady” skippered by Terry Woodrow told me that the rays were still with us and he is now seeing more cod in the 6lb range. Shani Howard fished on board his boat and she landed a cracking bass weighing in at 11lb 5oz. Neil Marples fished on his own boat “Milore” out from Walton Marina and reported thornbacks to 10lbs plus lots of dogfish as well as the still ravenous whiting feeding.

The Sophie Lee charter boat from Brightlingsea reports still good numbers of rays to be caught, plus cod, however, weed has been a problem, although it is now diminishing. Top bait seems to be lugworm tipped with squid. Ray Hempstead skipper of the Mersea based Sorcerer told me that cod and rays are on the menu, with Karl Wykes catching a cod of 8.5lbs and Lee Brooker finding one of 7.5lbs. 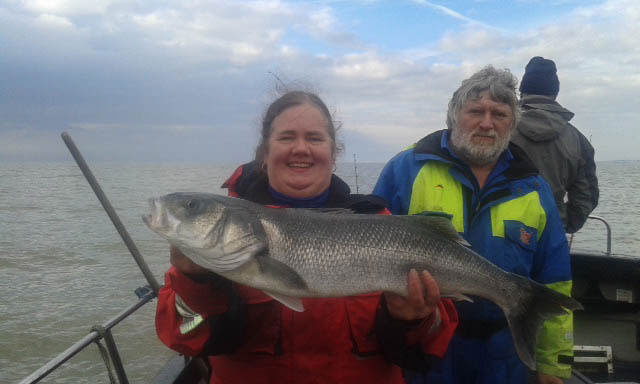 The kayaks have also been taking advantage of the calm seas and Alan Tipple and Sandie Davis fished off of Clacton seafront and came back with cod to 6lbs as well as a few rays.

The beaches and piers are certainly fishing better after dark with rays and codling. Clacton Pier is still catching rays, cod to 6lbs and dogfish. The Holland beaches have been slow during daylight hours, but after dark there are cod and rays to be caught, although very similar to the boats, not everyone is catching them.

Clacton Sea Angling Club fished their latest match on the Holland beaches below the Kingscliff Hotel, 8 anglers fished and landed 71 fish between them, mostly whiting and just 2 codling. 1st place went to Rob Tuck with 459 pts, 2nd spot with 267 pts was Chris Snow and 3rd place went to Nik Highfield on 130 pts. Heaviest fish fell to Rob Tuck with a codling of 55cm.

My trip this week was to Walton Pier, and with reports of some better sized codling and rays to be caught I was always going to be in with a good chance. I arrived on a late afternoon tide, but the winds were light with calm seas and sadly all I could catch was small whiting and dogfish. It seemed to be the same for other anglers fishing the pier, which just goes to prove that the windier the better to get those bigger fish feeding.

Colchester Sea Angling Club headed for the coastguard beaches at Walton for the fourth leg of their Transdec Match. 10 anglers fished a night tide and plenty of fish were caught, once again mainly whiting and pouting with only one small codling. Phil Buy won the match with 7lb 12oz, Paul Marron came second with 6lb 14oz and third place fell to Malcolm Wright on 5lb 4oz. Heaviest fish was a tie between Paul Marron and Neil Cocks with a dogfish of 1lb 15oz.