Relatively settled conditions last weekend saw mackerel make a late reappearance from several north east piers. Roker pier was one of the more notable venues for them and calm seas at the time of writing may see them return yet again.

In between all of this, a little bit of movement on the sea early last week produced some nice bags of cod again, night time results were generally the best but the rivers Wear and Tyne, and South Shields pier have all fished well in daylight hours. Steve Potts won a Tynemouth match with a typical mixed bag of seven cod, two flounders, and one whiting for 11lb 1oz, Ken West had the best two cod at 2lb 11oz, and 2lb 1oz. South Shields pier has seen bags of up to eight cod landed, the best around the 4lb mark, the lower and mid Tyne marks have seen bags of up to 10 fish with the better ones around 5lb, all taking crab and lugworm baits. The rock edges down to Roker have been very productive. Dean Turnbull had cod of 4lb and 8lb at Marsden, Callen Stevens fished the same area and had cod to 5lb and losing a big double figure specimen. Paul Wastell won a Cleadon match at the Gun Pits with two cod for 5lb 9oz, best 4lb 4oz. Hendon promenade has seen good numbers of cod around the 4lb mark landed. The small beach at Roker and Rathouse Corner have both produced mainly smaller cod around the 1½lb mark plus lots of flounders and whiting. The Wear itself has improved a lot with cod to 5lb showing from the Glass Centre up to the White Wall area. 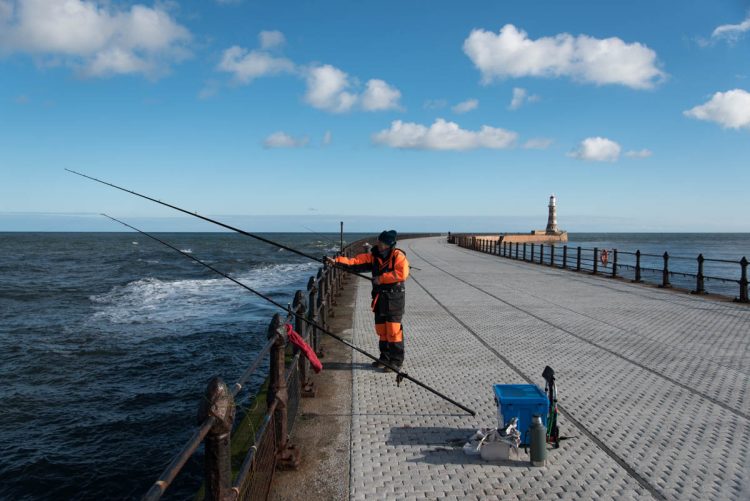 The Durham beaches down to Hartlepool have seen a lot more whiting, flounders and dabs showing but the various low water marks at Crimdon and Parton, the promenade, the Staincliffe, and North Gare, have all produced cod to 2lb.

The popular Ryhope Tuesday evening sweepstake saw some specimen cod landed. Dave Sinclair won with a cod of 4lb 2oz taken at the Targets, Mick Davison had one of 4lb at Featherbed Rocks, Dave Mould one of 3¾lb at Marsden and Stu Carr one of 3lb 11oz also at Marsden. The Ryhope club match also produced some fine cod. Bobby Bland fished the Tins in the Wear to land five cod totalling 4.84kg, Andy Rutherford had two cod for 2.85kg at Marsden, and James Fairly was third with the heaviest fish, a cod of 2.58kg. Bob Surtees had the best flatfish of 0.46kg.

The Fishermans Locker sweepstake on Wednesday evening saw better results. Robin Greenhow took the top two heaviest fish with cod of 5lb 5oz and 4lb 13oz, Tommy Tate had one of 4lb 10oz, and George Crawford one of 4lb 6oz. A Sunderland S.A.C. match saw Mick Newton win with one cod and one wrasse for 3lb 15oz, his wrasse was a nice specimen of 2lb 13oz for the heaviest fish

The recent Newbiggin Open saw 61 out of the 351 anglers weigh in 56 cod, 26 flounders, seven coalfish, two dabs, a pollack, and a pouting for 177lb 2oz. Geoff King fished at Cambois to win with two cod weighing 9½lb just ahead of Rob Allison with three cod for a total of 9lb 7oz taken at Longhoughton. Anthony Eke had two for 8½lb at Marden. Richard Murphy had the heaviest fish, a cod of 8lb 6oz taken at Longhoughton, Geoff King had one of 8lb 4oz and Paul Turnbull one of 6lb 12oz. Paul Nyberg had the best flatfish of 1lb 7oz, top junior was H. Scott with five flounders for 2lb 12oz, Sarah Johnstone was best lady with a single cod of 3lb 3oz, and the team event was won by Rob Allison and Denis Thompson with 15lb 1oz.

The Bedlington Station Northumberland Shore Open is on Sunday November 1st with fishing from 9.30am until 1.30pm between Tynemouth pier and Craster South pier. All piers and rivers excluded except Blyth pier. Basic entry is £12 seniors, £6 juniors, register at the Bank House Club, Newbiggin from 7am until 8.30am. First prize is £500 for the heaviest bag, the top two heaviest fish are a cash prize plus a percentage of entry money. Heaviest flatfish wins £50, plus junior and ladies prizes, spot place prizes, and the usual full supporting prize table. Edible crab and cart bait is banned by law.