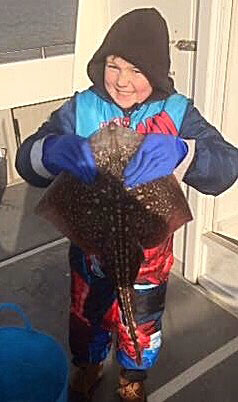 We seem to be in a very similar vein each week with the lack of any cod reports, but once again lots of small whiting and dabs to be caught and thornback rays from the boats.

I am a great advocate of the theory that where there is a void of a certain fish, i.e. cod, it will be filled with another species and it seems to be the whiting! Shoals of very small whiting are devouring every anglers’ bait along the East coast.

Hopefully now the sea temperatures have dropped to a more seasonal 5 degrees we might see the odd codling showing, but don’t hold your breath.

Seawatch Charter skipper Lester Baker has diversified and has been targeting the thornback rays and with great success catching 12 good size rays on one trip and 18 on another. John Greening from Milton Keynes was amongst his party and landed some great looking rays.

Eight year old Oliver Brown from Tiptree is getting to be an old hat at catching thornbacks and is on his fourth trip with Seawatch Charters and is really enjoying catching these heavyweight rays!

Local kayak anglers Sandie Davies and Alan Tipple can often be seen fishing off the Clacton seafront, but with freezing temperatures they opted for the more comfortable option of launching their boat. They reported that the rays were definitely feeding plus some bigger whiting.

On the whole the boats have seen a slight increase in ray catches plus plenty of small whiting and dabs. 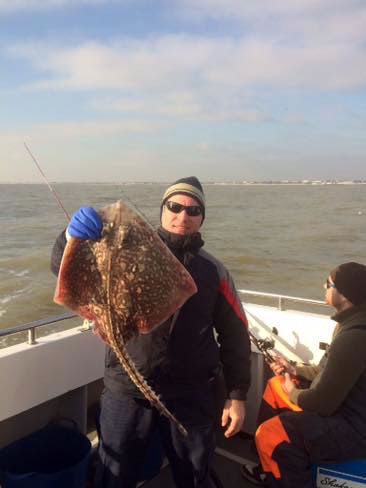 Clacton Pier has been quiet this week with just whiting and dabs and no reports of any rays being caught.

It seems to be the same with all the Holland beaches with only small fish and very few anglers.

I had a trip to the Walton beaches to fish an ebb tide and to be honest it was a fish or two every cast, they were all small, but with light rods and tackle it can make for some interesting sport.

Walton Pier has also seen dabs and whiting and not much else.

Let’s hope that we are now at the end of January, the fishing will begin to pick up and I am reporting on better catches!