Snowbee’s Deep Blue rods have been with us for a fair while now and it is over ten years since I first reviewed one. The Deep Blue always came out well in reviews but was not without some, admittedly constructive rather than negative, critiquing by the various testers who used the rods. The Deep Blue has now been given a makeover and while it has definitely not lost its signature look, much of the critiquing has been addressed across the range while the new model tested here, the Snowbee Deep Blue Titanium Skad boat rod version, addresses pretty much everything.

This rod is a 20lb class rod aimed squarely at anglers targeting the likes of cod, pollack and bass with lures; hence the Skad boat rod designation which refers to Snowbee’s range of soft plastic lures that have been a great success since their introduction. As with all the previous rods in this range the blank is, unsurprisingly, deep blue in colour. Black whippings are used which renders them almost invisible against the blank so they are picked out with gold and silver along with a cross-weave section in front of the fore-grip; this is the signature look that I have already referred to. 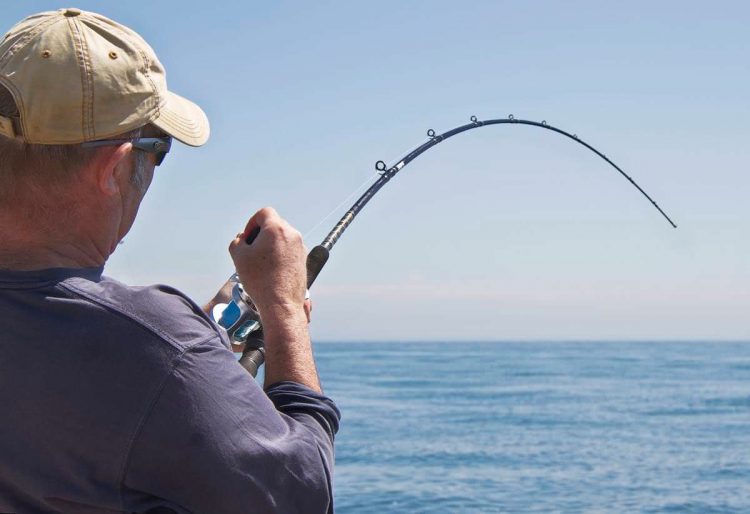 It makes for a very understated but attractive rod that is difficult to actively dislike even if you would prefer something more “In your face”.

At 8’ 3” long, the Skad boat rod addresses one of the criticisms of the original rods – the length. All the originals were 7’ 7” long and I, along with many of the testers, felt this was too short in the lighter (sub 30lb class) rods. Everyone who has looked at or used the Skad has said that it is a perfect length for a 20lb class rod. I must say I fully agree with them so I am a little disappointed the rest of the updated rods have stuck with the length of 7’ 7”. This is far from being show-stopping bad, but it is the difference between being “very good” and being “great”. 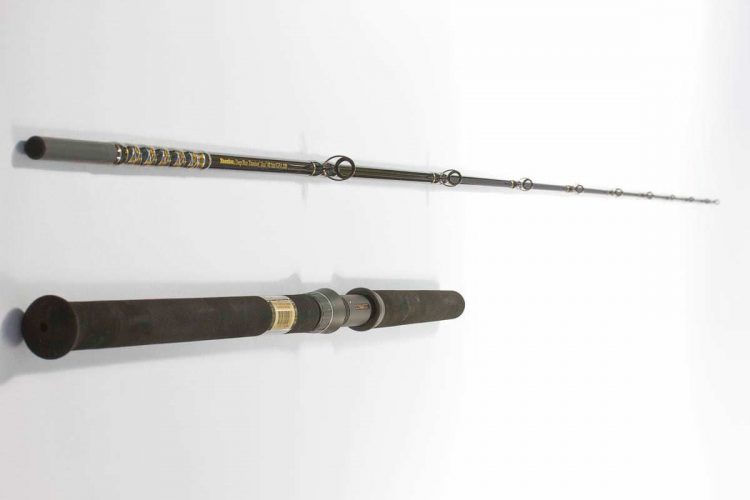 The Skad boat rod is a two-piece design as were the originals. However, the latest rods have moved the joint from the reel-seat to a plug-in spigot above the foregrip, creating a true tip and handle arrangement. This is the perfect layout for a jointed boat rod and removes another of the criticisms levelled at the original rods. This was that the jointed reel seat used on the 20lb, 12lb and 8lb rods produced a “necked” look which while it wasn’t actually a weak spot, did certainly give that impression. The Skad’s handle is very much in line with what would be expected on a top-quality rod. EVA grips are used above and below the Fuji reel seat with a concealed gimble under an EVA cover. At 15”, I find the length of the lower handle too long. The Skad is not unusual in this matter and I mention this as something to bear in mind, not as a criticism, though it was picked up on by another tester. What would be great for rods of 20lb class and under is a quality movable reel seat that doesn’t twist or slip yet looks attractive to the buyer but this is quite a tall order.

The “Titanium” part of the rod’s name comes from the ALPS three-legged rings that are fitted. Quoting Snowbee’s web site, “These innovative new guides are made from 100% Titanium for light weight and strength, so will simply never corrode, no matter how much abuse they are given. They also feature a ‘Ring-Lock’ system, whereby the Zirconium ring liners are locked in place and can never be knocked out”. Their use also addresses a third issue with the original rod regarding rings. The old rods employed oval Fuji rings and the single-leg ones fitted nearer the tip, while beautifully preserving the rod’s action, were very easy to damage. The oval style of rings was, and still are, fitted to many top-quality rods so it would be very unfair to pick on Snowbee regarding previous decisions but I think the switch to a three-legged design is definitely the right way to go and I hope the claims for the longevity of the ALPS rings are borne out. 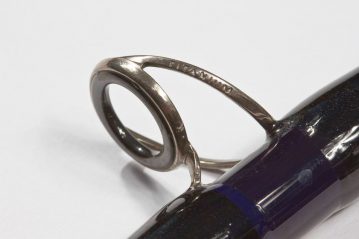 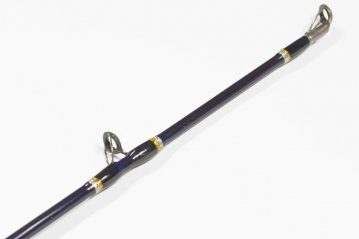 The final thing that must be said about the Skad boat rod before a look at how it performed in testing are that, as previously with all Deep Blue rods, the action is designed using an original equation to arrive at an “IGFA” class rating. This results in a very progressive action, not as “tippy” as many rods on the market that are of a similar rating. Snowbee’s MD, Russell Weston, explained the system to me in 2005 so I will simply quote him again; “If the rod’s tip is loaded up until it is at 90 degrees to the butt, the load applied should be about 25% of the rods rating (5lb for a 20lb class rod). Maximum load, akin to pulling into a snag and approaching the rods ultimate limit should be about 33% of the class rating, around 6.5lb for a 20lb class rod”.

That is enough of the rationale behind the rod, how does it perform afloat? To find this out I matched it with a Snowbee Deep Blue 10 reel loaded with 15lb Tuf-Line. This produced a superbly balanced outfit for a day’s wrecking. For both fish and photographs, the most productive testing of this rod was for summer wreck cod aboard Kev Duell’s Lymington based charter boat “Voyager”. Kev put us on the fish and I can honestly say I have never christened any piece of test equipment so quickly. Within about ten seconds of the lead hitting the bottom, my lure was swallowed by a cod. Admittedly at around 7lb it was no monster, but it put a nice bend in the Skad and showed me what an excellent, sensitive rod this is. I had two more similar sized cod on the next two drops which served to reinforce my initial findings. 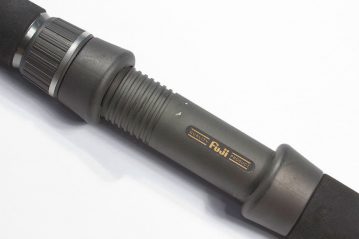 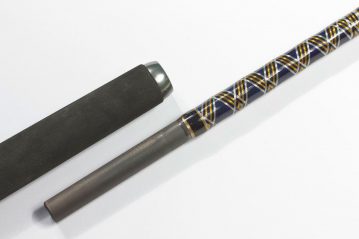 Moving the rod on to Brian Gourley, his initial, but very perceptive, impressions were; “The Skad boat rod has a good finish with sensible selection and spread of eyes. Functional and uncluttered reel seat and spigot joint – I didn’t even notice it, just like it should be”. Brian put the best bend in the rod on the day taking a cod of around 13lb which made the most of the tidal flow at the time.

Reasoned Feedback on the Deep Blue

He had this to say regarding the Skad when a fish is on “Reasonably soft initial tip action which progressed to a through action under load, with plenty of power still left and significantly, still no hint of that locked out or ‘dead’ feel”. I asked him for a bit more information on this last point to which he answered “The rod felt full of ‘life’ and never lacking. Some of the through action rods I have tried do the job but feel so ‘dead’ or lifeless – I think Snowbee may have got the formula just right with this model”. This is high praise indeed from someone who owns a lot of gear from a lot of manufacturers and who has fished in many corners of the globe. Like me, Brian also picked up on the length of the handle, saying “The butt length was too long for me, when fishing with the butt in my groin, but conversely – made the ‘under arm’ position very comfortable”. The only thing I would add to Brian’s comments are that I would like the addition of a hi-viz tip. 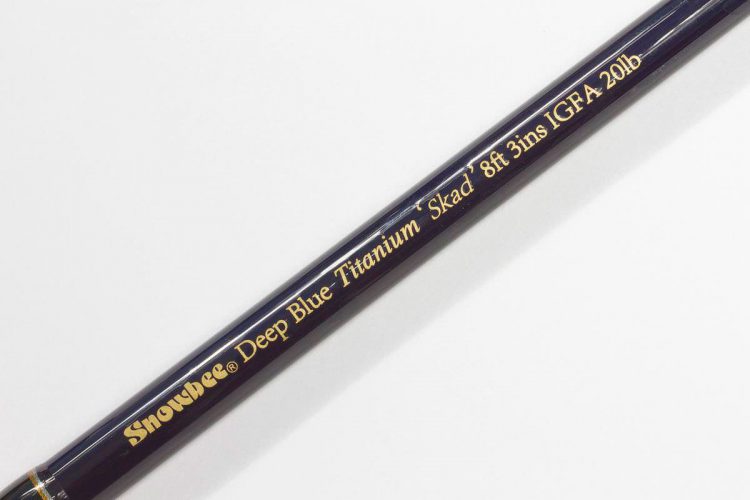 In summary, I think Snowbee have a real winner here and I think the Skad boat rod is very much fit for purpose. It has so much going for it and only minor niggles against. RRP is £195 but is available online for £175 at Uttings. For more information take a look at www.snowbee.co.uk