A more settled week has been beneficial for both boat and shore anglers alike, the strong northerly winds have eased, leaving us in a more settled spell of weather.

The boats are now seeing the first of the early smooth-hounds appearing, most are on the small side but as the month of April moves on the bigger fish will appear. Smooth-hounds are a great sport fish to catch as they fight very hard, but should always be returned as they are all breeding fish.

There also seems to be an upturn in the amount of spurdogs showing in the Thames Estuary. These fish are similar to the smooth-hound but are usually found in deeper waters. At present there is a ban on landing this species but they can provide good sport.

Neon Ling was on board the charter boat Eastern Promise out of West Mersea and took advantage of the calmer weather and travelled all the way down to 9 miles off of Felixstowe. Plenty of rays were caught plus whiting and dogfish and they also landed a 6lb smooth-hound, although no cod were caught.

I think that we might have to write off this year’s spring codling run. Yes there are a few to be caught for the boat angler, but hardly any fish have been caught from the piers or beaches. If you remember the cod stopped feeding in mid-December when the vast shoals of sprats and herrings appeared, well they have all but disappeared now, but there is still not a sign of codling feeding. 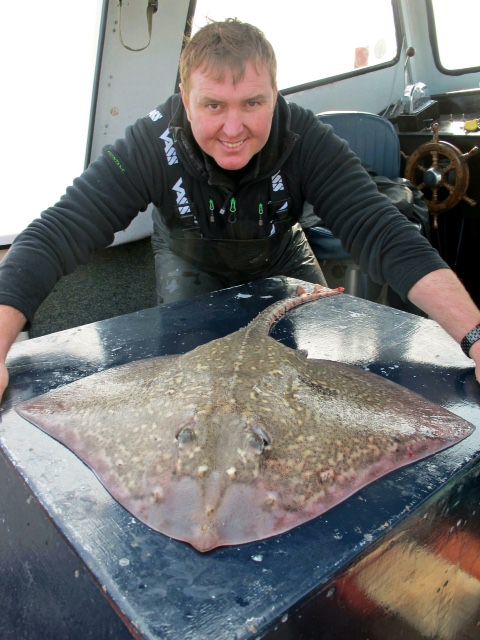 Local anglers Lawrence Chisnall and Phil Winger had a great day’s boat fishing within view of Clacton Pier. They caught 40 rays between the two of them, with the biggest weighing in at 16lbs, and herring was top bait.

Thornback rays seem to be everywhere; the Wallet and Gunfleet sands seem to be good holding areas, but other venues will also hold these prolific rays. St Osyth beach has once again fished very well for rays with fish to 9lbs being caught regularly from in between the rocky breakwaters all the way up to the nature reserve.

The Clacton and Holland beaches remain much the same, with only a few anglers fishing here reports are very patchy, but whiting, some rays and dogfish after dark will be caught. Clacton Pier has always been a great spring venue and this year is no exception; thornback rays are here in numbers now and local angler Matt Clark caught rays to 10lbs, plus other anglers also reported similar catches, the night tides will always fish better.

The Frinton beaches have seen a few school bass, whiting and the odd eel being caught. The rays don’t seem to have turned up here yet, once again very few anglers are fishing this venue. Walton Pier received slight storm damaged as Storm Katie moved through and had to be closed to anglers for fence repairs for a couple of days, but by mid-week they were up and running again.

Nine year old George Readman fished here with his dad, it was his first ever sea fishing trip. He had plenty of bites and had fun with the feeding whiting.

The top of the pier has seen a few rays being caught, plus dogfish, pouting and whiting.

The high tides for the weekend are Saturday 14.01pm and Sunday 14.45pm