The Weymouth International Boat Angling Challenge, the WIBAC, first took place in 2001 and was known as the YYS International Challenge for the first ten years. Andy Selby of the Weymouth Angling Centre had spotted a gap in the sea angling calendar towards the end of the season when both boats and accommodation were readily available out with the weekends.

Since those early days, with the help of regular sponsor Fladen, Andy and his wife Charlotte have succeeded in establishing this five day event as one of the most popular charter boat competitions in the UK. The event attracts anglers from throughout Europe and Scandinavia with entrants regularly turning up each year from Sweden, Denmark, Belgium and France to join those from the four home nations and Eire. 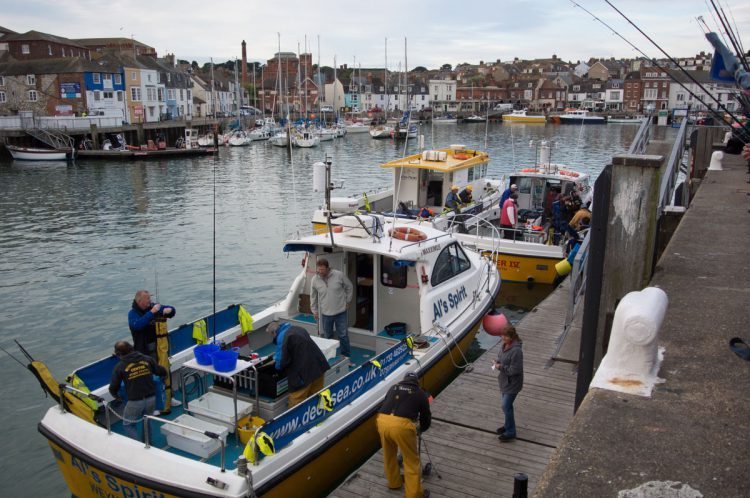 The quality of the fishing coupled with the fact that Weymouth has probably the best available charter fleet in Europe, with high quality boats and top class skippers, have helped make the Challenge a “must fish” event for the boat angler. In addition to the boats and the fishing the competition format is also a big plus as Andy took an early decision to spread the prize money out rather than have one big overall prize for the cumulative five days.

Each day of the competition presents the angler with a separate individual match with its own substantial prize list while still counting the scores towards the overall five day event. In common with the majority of boat competitions the event is catch and release with different points awarded for each species landed and any specimens weighed on-board and returned. The top scoring angler on each boat is awarded 100% with the other scores being based on this angler’s total and this is used for the overall event and the various team sections. The daily competition lists are scored according to the points list for that day rather than the percentage system. The programmed five day events consist of a day on the wrecks and one on reefs both of which are weighted towards the bigger fish such as conger and blonde rays. These days are followed by a day when the anglers are searching for one of each species, a day where only lures may be used and finally a day using the established five and five points system where the first five fish of a species are allocated fixed points and the next five score one point. 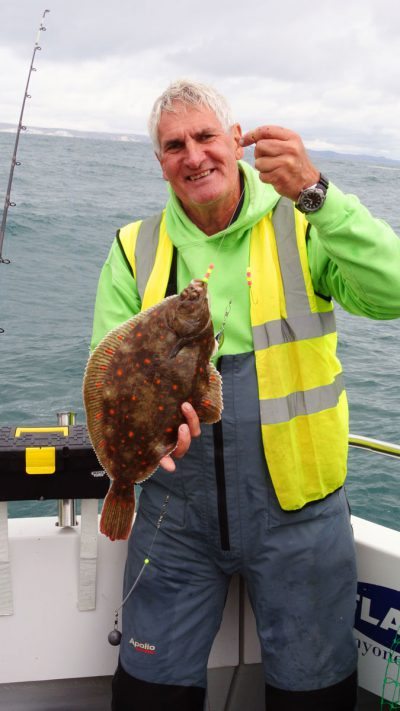 This latter scoring system is also used if wind or water conditions prevent any day from being fished to the program. This flexibility means that even if stormy conditions limit the fishing areas to close inshore a competitive event can still take place, essential when anglers have travelled from far and wide.

Every day of the event requires a different mind-set from the competitors and the tackle box contents change frequently over the week as the focus switches from single hook traces on the big fish days to hunt conger and rays to bait free sabikis when trying to tempt wrasse on the lure only day.

Like most UK venues this year a number of seasonal species were not about in the numbers that would normally be expected, a result of the prolonged period of cold easterly winds at the start of the season. Bream and garfish in particular failed to show in areas where they would normally be expected to be established in September. However the knowledge and skills of the skippers and Weymouth’s varied fishing grounds meant that there would be plenty of other fish to target. Over the week the anglers would be aiming to land a myriad of local species varying from sandeel and turbot on the sandbanks, through plaice and gurnards on the mussel beds to wrasse and pollack over the hard, weedy ground that surrounds Portland Bill.

Mackerel also proved elusive on some of the days and the supplied bait of frozen squid, mackerel and live ragworm would prove invaluable over the period of the competition

The weather gods were kind this year, 2013, with no restrictions placed on the fishing. However, because of the spring tides which were dropping off over the five days, the big fish days were switched to the end of the week and on the Monday the entrants were targeting one fish of each species. As usual the day was fiercely contended with the top ten anglers all finishing with 12 species in total and it took a points count back to produce the winner of the daily £400 first prize. Weymouth veteran Tony Hudson topped the list with joint second place going to Dave Mann and Matty Osborne who had the same total species points and shared the combined second and third prizes of £400.

The second day was the five and five day and boats scattered over a wide area as the skippers followed their well thought out plans which they hoped would allow their crew to quickly max out on each of the prescribed species. Generally the boats would spend time at anchor for conger, rays, dogfish, bream etc and then switch to the drift for plaice, pelagic species, pollack and wrasse. Although the anglers would be advised of a strategy at the start of the day by the skipper everyone had to be adaptable given the unpredictable nature of sea angling. At the end of a hard fought but productive day Angling Trust Team England manager, Mike Patten finished at the head of the list with 197 points followed by Steve Clements on 193 and visiting French angler Francis Couzinet in third with 190 points. Francis is a familiar face on the International boat competition circuit and he lifted the team and individual gold medals at the 2012 FIPS-Mer World Boat Championships. 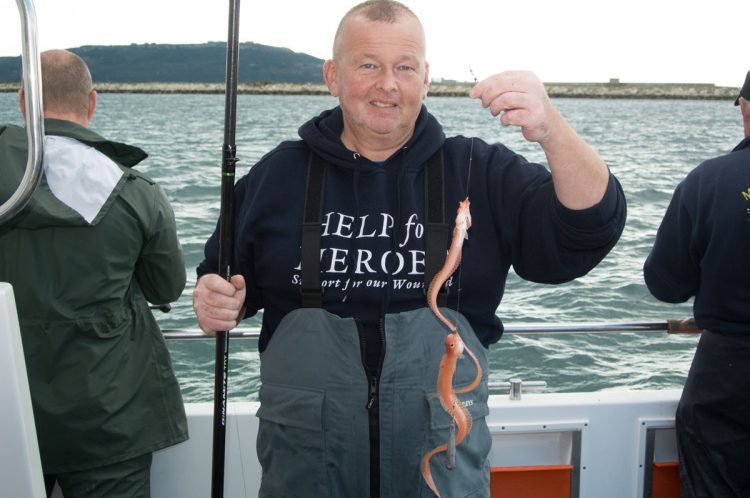 The lure day is one which is particularly enjoyed by the Scottish and Scandinavian visitors and can be a particularly frustrating but pleasurable day afloat. Over the years the event has become more and more competitive as the skill levels and shared knowledge have increased. The organisers took the welcome step this year to ban the use of Isome style worms which can be effective when used as a static bait particularly for the elusive wrasse. Anglers would have to rely on unscented and unflavoured lures such as sabikis, redgills and eddystone or delta eels. The usual suspects such as mackerel, pollack, pout, poor cod and sandeel were the main scoring species but the catches also featured good numbers of red gurnards and wrasse of various species. It proved essential to lure at least one of the more unusual artificial species to win the boat and get among the top prizes on the day. Scottish visitor Scott Gibson proved the master of the day and finished ahead of Steve Batchelor and Paul Hart in second and third places respectively. 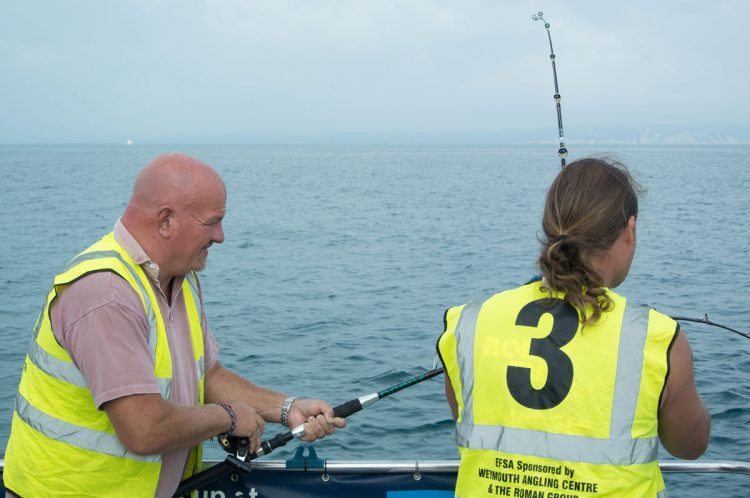 The good weather continued into Thursday and the boats set out to anchor on their favoured wrecks within the limits set at 15 miles from the town bridge. Co-operation between the skippers ensured that the boats were well spread out over the available wrecks resulting in the boats being able to set and re-set the anchors as the wind and tide required. Catching fresh mackerel or pout would prove to be particularly important on this day as the eels and tope responded best to a well-established scent trail. With 15 points for a conger hitting these hard fighting eels would be important and this showed with these making up the majority of the leading angler’s catches. Andy Wells took the top prize with 135 points closely followed home by fellow Frenchmen Jean Pierre Coutauchaud and Francis Couzinet on 120 and 115 points respectively.

The final day on the Friday would again see the competitors using single hook rigs to target mainly the high scoring conger, rays and tope on the reef out as far as the 7-mile reef and the Kidney Bank. Although the tides had slackened off considerably during the week it still proved necessary, at some stages of the tide, for anglers fishing for blonde rays on the banks to use three or even four pound lead weights to securely hold bottom. In what would prove a significant result overall Ken Smith was top scorer on the day with 105 points, second place went to Richard Ferre with 100 points and Bram Cole finished third on the day with 90. 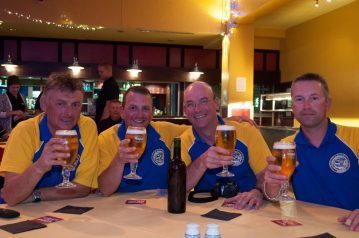 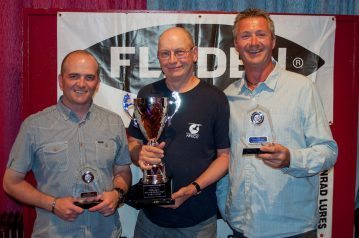 At the end of a long, hard week Ken Smith proved a popular winner as he picked up the £3000 first prize with 483.45 points. Second spot went to Ashley Currier with 474.39 and Scott Gibson finished in third place on 454.72 points. With his reef day win, two boat wins and £500 for breaking the WIBAC record for turbot, a fish of 12lb 8oz, Ken finished a very profitable week with total prize money of £4100.

The sponsors, Fladen and Weymouth Angling Centre, provided and excellent prize list covering both the individuals and the various team, specimen and Weymouth special awards. The extra awards included the one for the top boat which went to Al’s Spirit skippered by Adrian Brown and the Robin Armour award which went to Pete Baillie who spent a considerable time playing a hard fighting plastic carrier bag. A full list of the week’s awards can be downloaded from here. 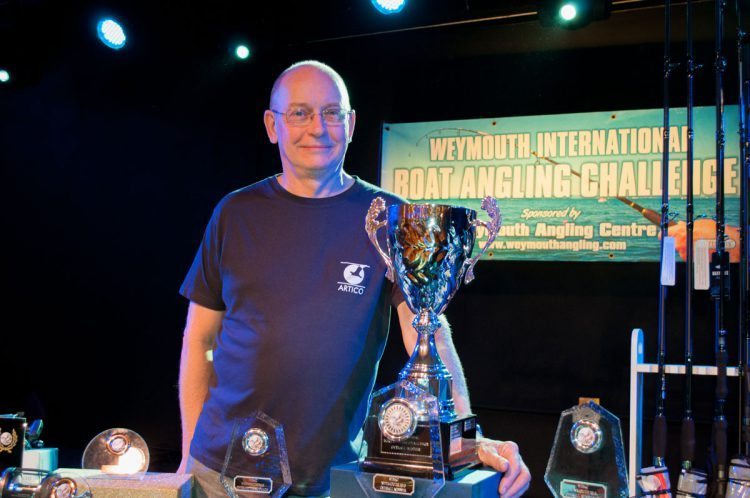 If you have never fished a major event before or wish to pit your wits against some of Europe’s top boat rods then I would highly recommend that you sign up for this brilliantly organised competition. Next year’s WIBAC will be at the slightly later dates of the 20th and 24th October because Weymouth has a busy season planned with both the World and European boat championships taking place at this great venue. The entry form is attached to the results in the link above.