The winter months can be a dead period for boat anglers north of the Border. The constant stream of gales and the fish heading off for spawning leaves the boats generally tied up at their berths. It didn’t require any thought to answer in the affirmative when Ally Campbell suggest a trip down to north Wales for a weekend with Gethyn Owen aboard My Way 2 for some Welsh winter fishing.

I have fished with Gethyn many times over the past 15 years but until now it has always been from the Anglesey side of the Menai Straits and never have I experienced Welsh winter fishing. In March 2018 Gethyn lost his first My Way, as did more than 80 other owners, when a massive storm surge hit the marina at Holyhead. Several factors lead Geth to decide that the marina at Port Dinorwic would provide winter berthing for My Way 2. 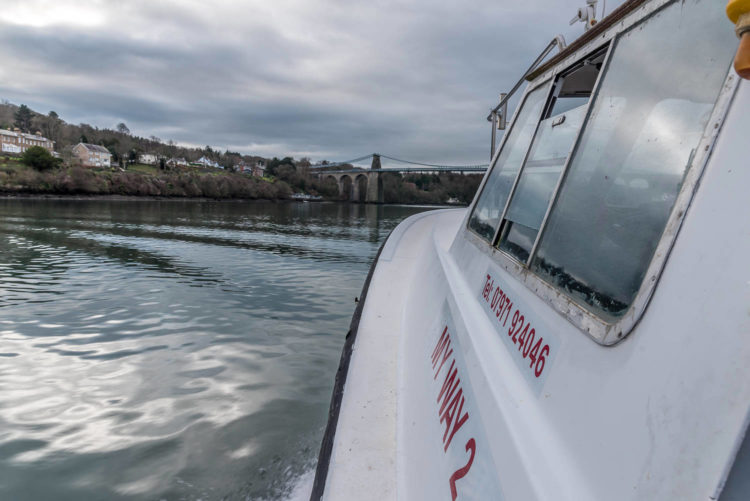 Welsh winter fishing aboard My Way 2

The marina is on the mainland side of the Menai Straits, located within easy reach of accommodation in the city of Bangor. It provides a safe mooring for boats and provides quick access to the sheltered waters of the Straits.

The trip planning was quickly completed and a free weekend organised for the middle of January. Accommodation was arranged in the spacious and reasonably priced rooms of the Bangor Travelodge, a ten minute drive from the Marina. Billy McCormack and Scott Gibson travelled down together from the Central belt and I picked up Ally half way through what should have been my 11 hour journey. Mickey Duff drove over from the Wirral to join us on the Saturday morning.

Unfortunately, were so busy putting the SFSA world to rights that we missed the M56 turn off, only noticing our lack of navigation when the M6 toll road signs appeared. An unnecessary 100 miles added to our journey. We eventually arrived at our hotel two hours behind schedule. 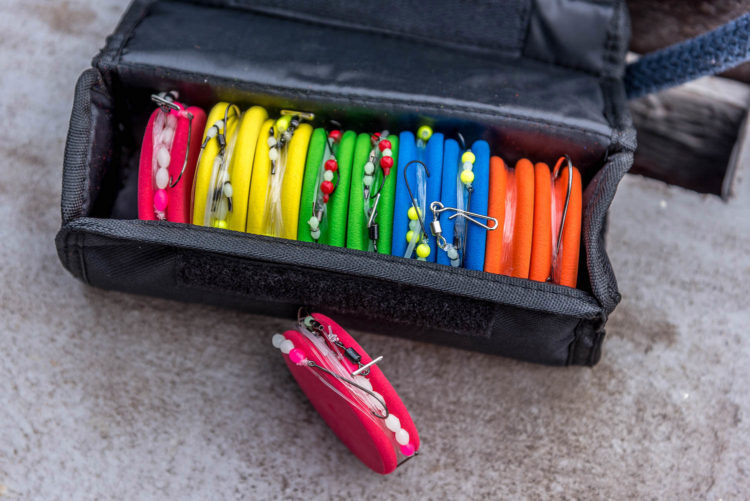 GoAngling traces in a rig wallet

The forecast looked good for the coming two days and all were in good spirits as we met up with Gethyn and Mickey at the Marina for the first day of our Welsh winter fishing at the reasonable hour of nine o’clock. Our gear was minimal as the fishing requires only the simplest of rigs and we had arranged for the skipper to supply all the bait required. Technically, we could have travelled without any rods and reels as Geth provides a great range of Pure Fishing gear for use free of charge. He also has a range of targeted rigs and traces available for sale so travelling light is definitely an option. 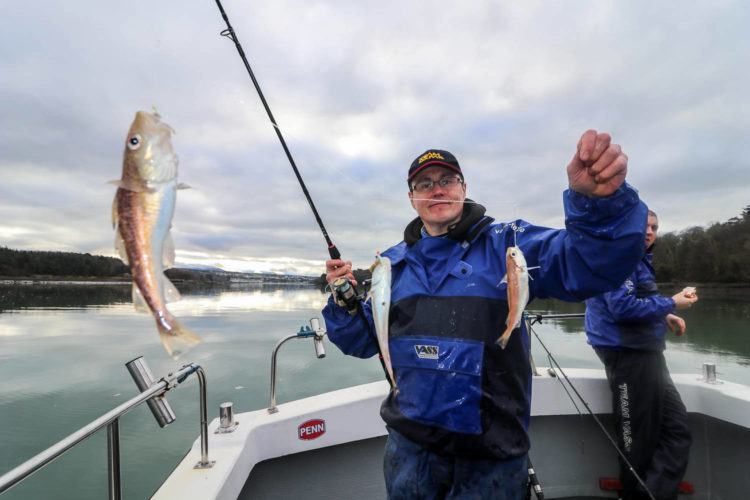 The wind had been blowing the day before and Gethyn had established that it would unsafe to attempt to travel over the sand bar at the south west end of the Straits. Our day was spent in the flat calm waters of Straits between the Marina and Garth pier towards the northern end.

From the first drop we were provided with a constant stream of whiting, small codling and poor cod. Lesser spotted dogfish helped a the occasional bend to the rods. The most impressive fish of the early sessions was one of the biggest long spined sea scorpions I have ever seen which fell to Mickey’s rod. Mickey finished the day with nine species all of which were recorded for what seemed like every Facebook species hunt! Nine species on a trip in January is a great result anywhere not just for Welsh winter fishing. 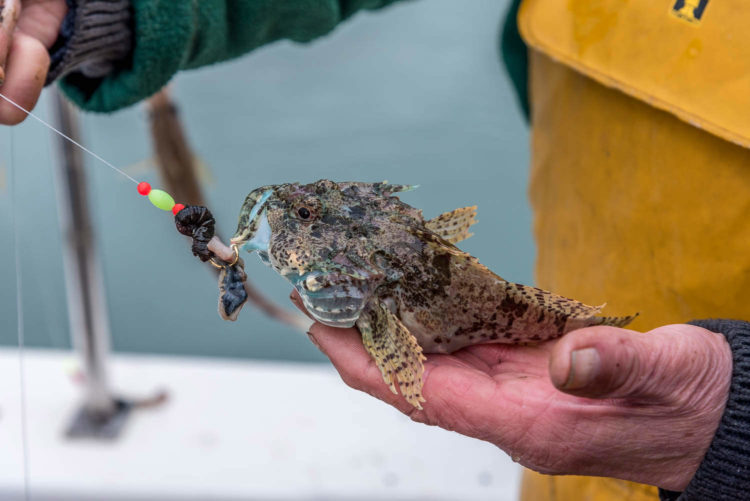 Most of us on board fished with two or one up one down rigs both with and without booms. Hooks were between size 4 and 1 with mackerel and squid both producing fish.

The LRF rods were used to provide a bit of variety with the sport but other than the sea scorpion no mini species put in an appearance, probably due the water temperatures and the fact that the baits were surrounded by their larger cousins. 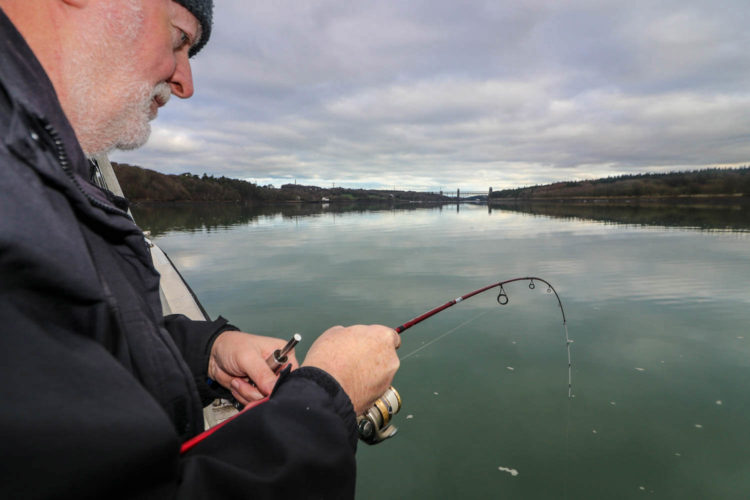 As darkness approach we headed back down the Straits passing under both the Pont Y Borth and Britannia bridges. Everyone switched to one or two down rigs and upped the hook and bait sizes in anticipation of larger fish.

The bull huss did not disappoint with a steady flow of fish coming right round the boat. Nothing massive, with the biggest being around 7lb, but welcome sport in inshore waters at a time when the boats in most ports are tied up. 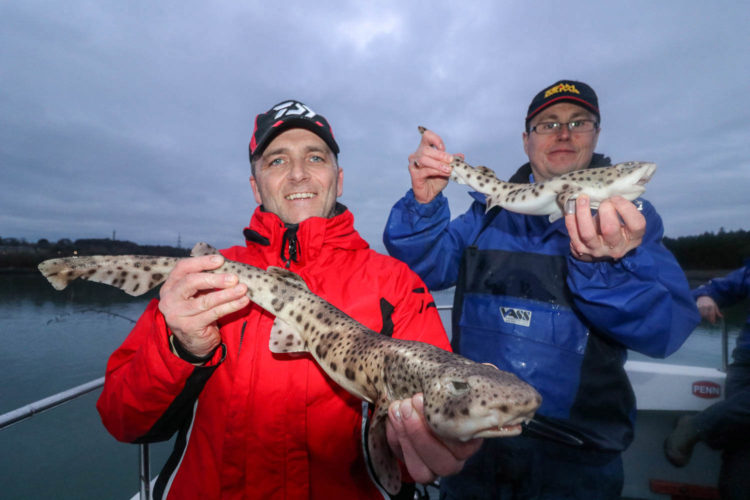 Scott and Billy with huss

A surprise after dark was a clocking lobster which attached itself to the bait of crewman Mark Dolben. Like all the fish over this weekend, other than a couple of whiting for bait, the massive crustacean was returned alive. 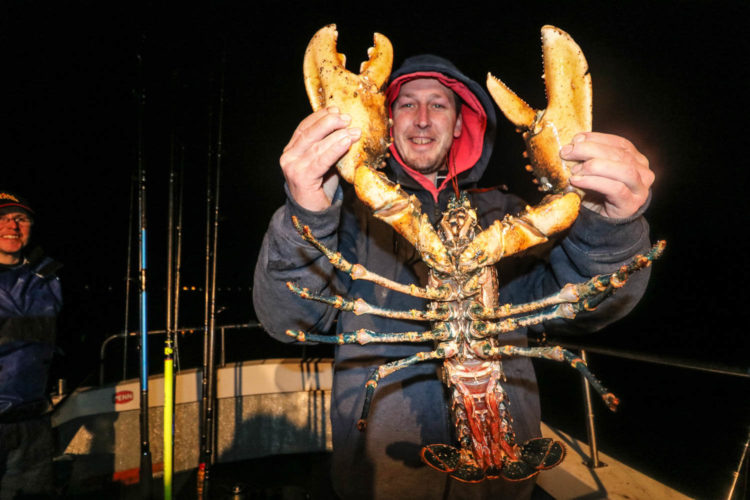 Mark with a big lobster

The final fish of the evening was a strap conger which fell for Mickey’s bait. Not a wrecking monster but good to see on a mark where they used to show many years ago. Welsh winter fishing can certainly produce a good variety of species. 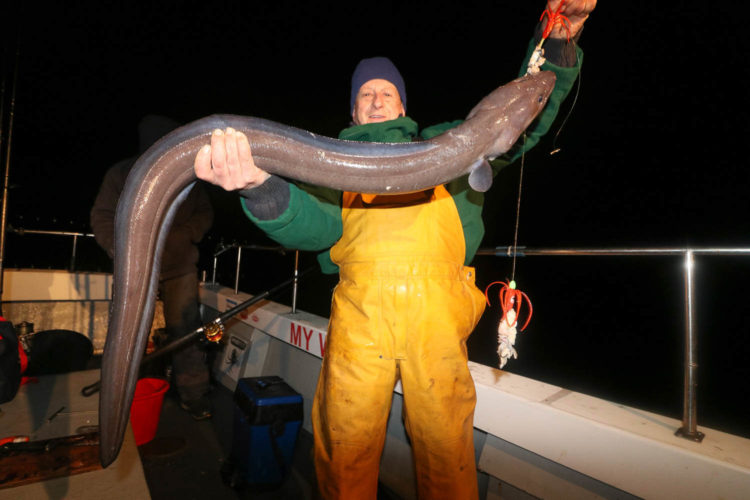 A strap conger for Mickey

After a good meal at Table Table in Bangor, thanks in particular to the barmaid for the 40% discount, and a few ciders at the hotel it was off to bed with thoughts of the next day at sea.

An early rise and we all boarded My Way 2 at 07:00 hrs to a welcome cup of tea or coffee. As he loaded the breakfast sausages in the oven Geth explained that as the sea had settled down we would be starting the day crossing the Bar and heading for a mark in Caernarfon Bay. Target species here would be thornback ray with the chance of a winter spurdog.

There was only a slight chop on the water, which later died away, and we dropped anchor in approximately 20 metres. 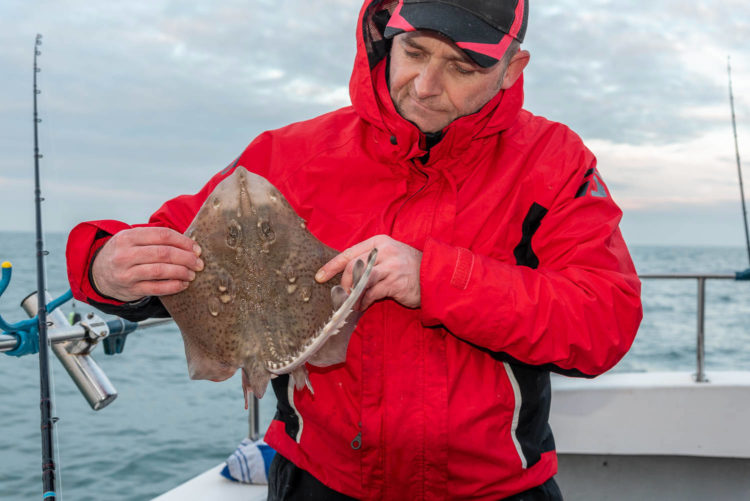 First ray of the day for Scott

Not long after the anchor settled the first fish of the day came to the boat as Scott landed a small thornback. This was rapidly followed by one of the promised spurdogs for Ally, this proved to be the only one of the day.

From then until an excellent lunchtime chilli, provided by Gethyn’s wife Trish, the rays provided regular sport with fish up to 8lb crossing the gunwale. Care needs to be taken handling the Welsh thornbacks as the have nasty long thorns and most have the spikes on their underside as well as their backs. 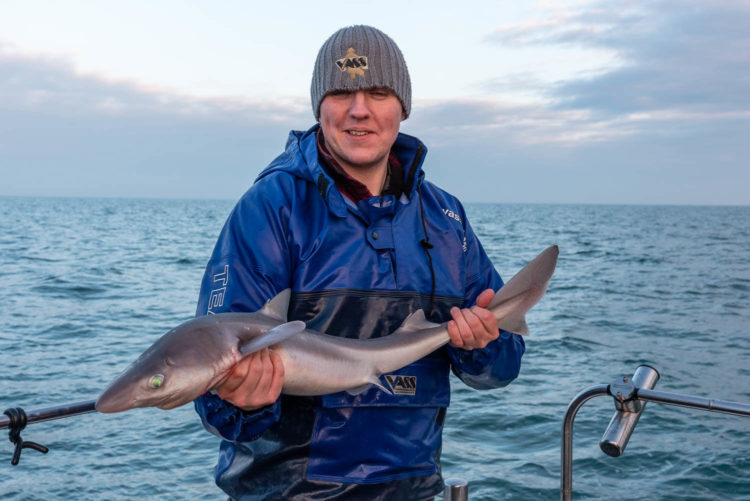 Ally with the only spurdog of the day

As the tide changed the sport with the thornback ray gradually slowed but a number of the feisty bull huss continued provided some variety on this mark. Welsh winter fishing was again proving its worth. 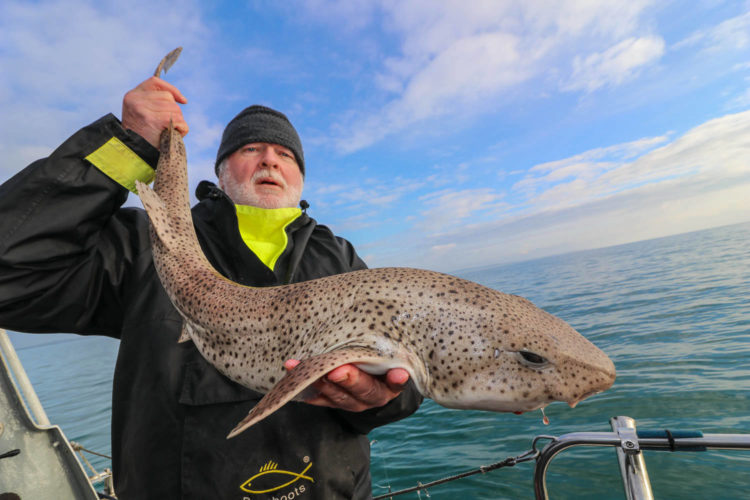 The author with a Caernarfon Bay huss

We vacated the Caernarfon Bay mark mid-afternoon to ensure that we safely crossed the Bar as dusk fell. The constantly shifting sandbanks which make up the Bar require the skipper’s full attention as it is not always safe to rely on an electronic track to pass back into the shelter of the Straits. 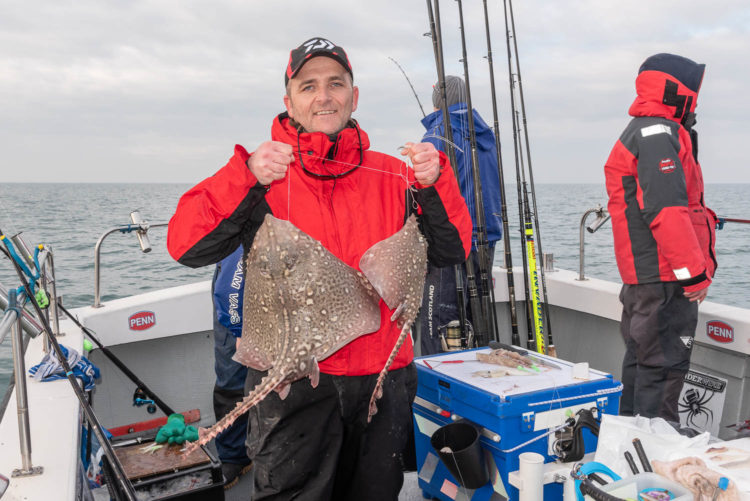 Scott shows the benefits of fishing two down

We headed back to the same mark as we fished the evening before and the huss did not disappoint as they kept the rods bouncing during the only period of rain over the weekend.

Mickey unfortunately dropped a conger near the boat but this mark is certainly worth a serious try for the snakes after dark. 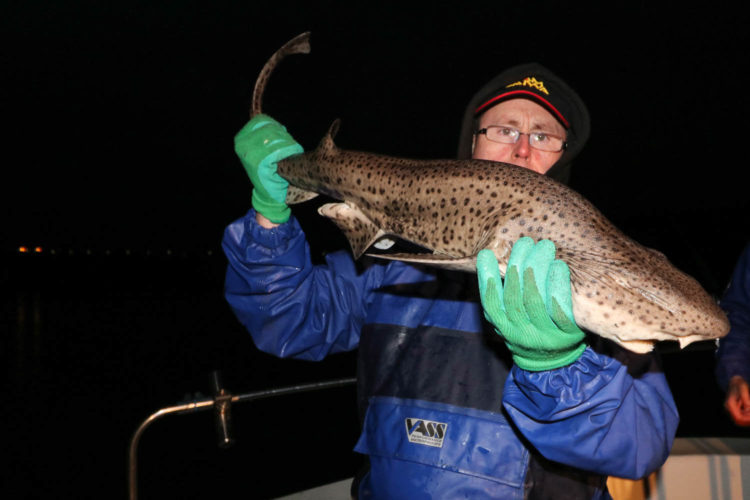 By 20:00 hrs the tide had risen enough to allow My Way 2 to return to it’s berth in the darkness with five very happy anglers on board. We were already discussing a summer return to target the smoothhounds in Holyhead Bay.

Anyone who fancies a great day out at the Welsh winter fishing can find full details on Gethyn’s informative website. There is a full calendar showing the available dates and Gethyn will try to accommodate anglers wishing to target specific species, subject to weather and tidal conditions. He can also be contacted at reasonable hours by phone: 07971 924046 or email: info@goangling.co.uk. 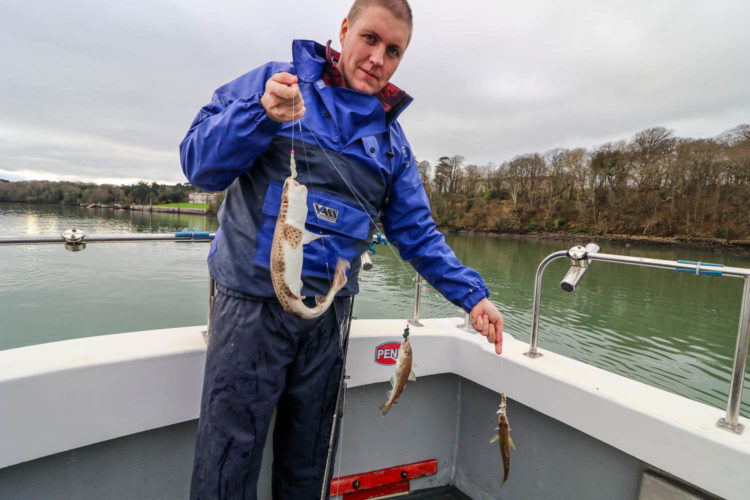 A treble shot for Ally

The outing with Geth are always entertaining, with drinks, food and questionable music always on the go. He looks after newcomers to the sport and provides a top class range of loan tackle and his camera will always ensure that the anglers have a record of their trip.