Irish angler Ashley Hayden describes a day when a conger trip from Kilmore Quay turned into an all action tope fest. 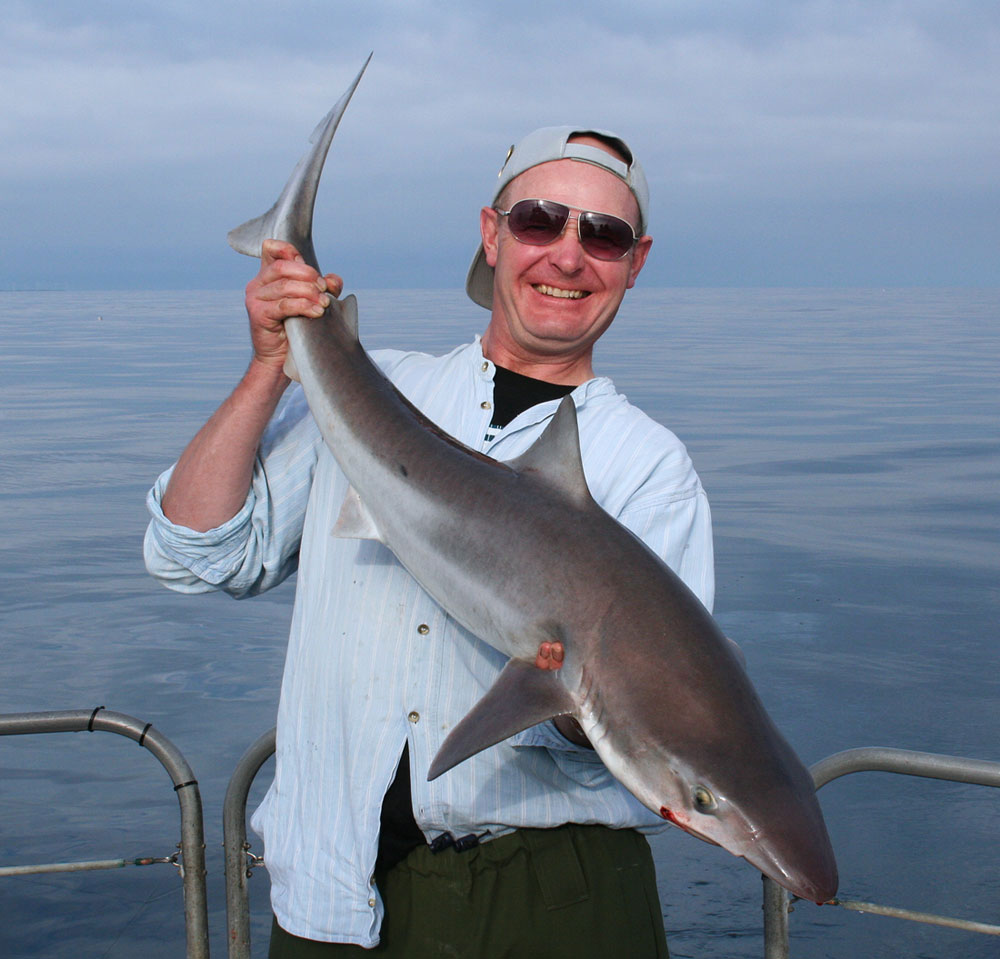 The sleepy fishing village of Kilmore Quay in south Wexford has long been recognised as a centre of sea angling excellence. In his book “Salt Water Fishing in Ireland”, Herbert Jenkins Ltd, 1966, Welsh angling journalist Clive Gammon regaled stories of large reef pollack, hard running tope, and fighting bass. Full circle and the fishing still hold’s up with 7000 fish, many caught and released, boated during a recent Irish Master Angler event. In an effort to further improve the angling product on offer out of Kilmore, a wreck fishing survey was commissioned by Failte Ireland and carried out under the auspices of the Eastern Regional Fisheries Board.

The dates were set for the middle of October and Eamonn Hayes, skipper of the charter vessel MV Autumn Dream supplied the craft; the weather could not have been kinder as an Azores like high decided to centre itself over Ireland. With a crew of experienced anglers including Mr Sea angling himself, Norman Dunlop, small boats king Mick Hennessy, and top specimen hunters Ian Mulligan and John Millerick on board the stage was set for some quality angling.

Wreck angling has long been in the skippers’ minds off Kilmore Quay and Welsh charters out of Milford Haven occasionally docked for an overnight stay in Kilmore having fished wrecks within twenty miles of the Irish coast. These same boats would return to Wales the next day, hitting the wrecks on the way back. The idea for the survey was kick started as a result of this practice. The aims of the research being two fold, primarily establish the quantity and average size of the fish stocks present, and secondly allow time for the Kilmore skippers to perfect the techniques necessary to fish the wrecks properly, so enabling them to offer a professional product.

Having been blown off twice before during the year this was third time lucky and the weather could not have been more obliging. An early October Indian summer had established itself and that would remain for the next three days bringing calm seas and settled conditions. A number of marks were fished over Monday and Tuesday giving promising results with pollack to nine pounds and ling to fifteen pounds plus. No conger were landed, however a number of large fish were encountered which having initially been lifted from the shelter of the wrecks decided that enough was enough and dived unstoppably for their fishy lair, resulting ultimately in a breakage as the line wrapped around some unseen obstacle. 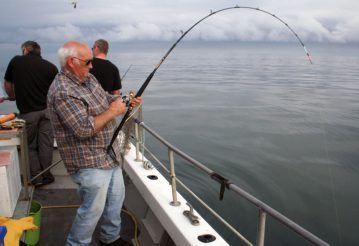 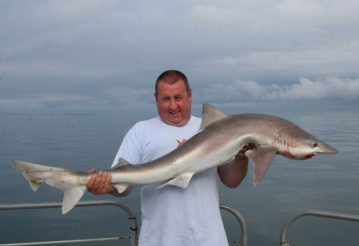 The Wednesday, day three of the survey, dawned chilly and still. A mist clung to the Saltee Islands four miles offshore, and the sea was mill pond calm. An eight-thirty start saw Autumn Dream, skipper Eamonn Hayes, and his expectant crew leave the quay. On board were Norman Dunlop, specimen hunters Ian Mulligan and John Millerick, local anglers Gerry Mitchell, Liz Redmond, and Ashley Hayden from the ERFB. A short drift inside the Saltees produced enough mackerel for bait then it was off out to a wreck lying in 180 foot of water eight miles beyond the great Saltee. Pollack, conger and ling were the quarry but the day was to hold a very pleasant surprise.

Eamonn found the wreck and the form of the last two days was repeated with an initial few drifts gilling with shads and red gill eels establishing the presence and size of the pollack population. Satisfied with the results Eamonn Hayes positioned Autumn Dream up tide of the wreck and anchored the craft so that lines could be fished in an easterly direction towards and into the superstructure. The wreck had no name, being just coordinates on the GPS and the sonar showed it to be in three sections with a debris field running north east south west. By this stage the mist had burned off, the sun hung in the sky, and the sea was like glass. 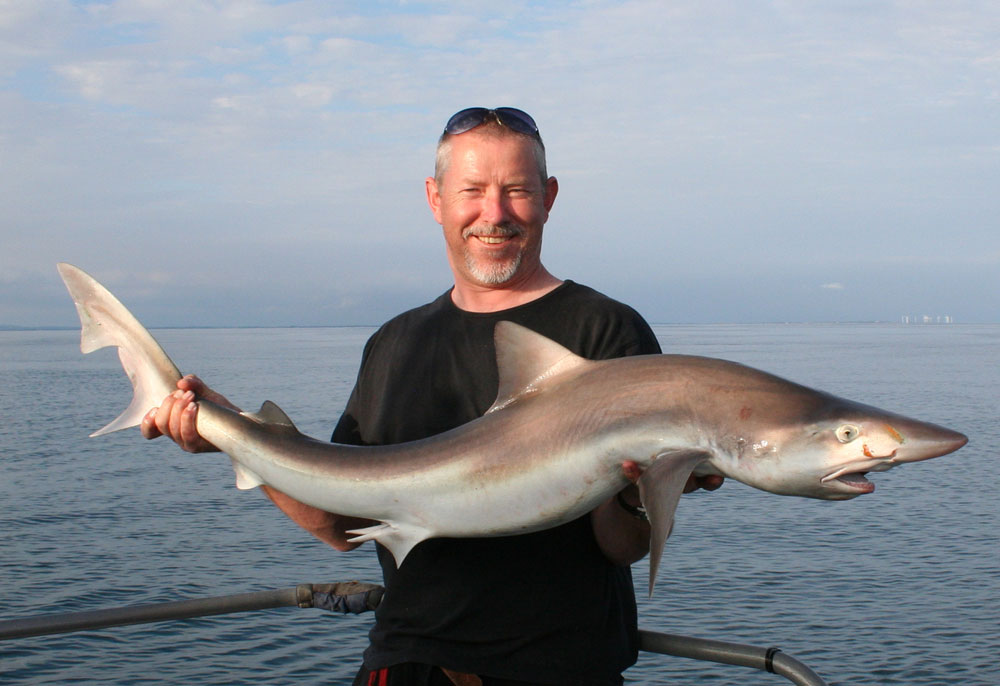 Twenty pound class braid rods equipped with heavy running leger rigs were lowered to the bottom. 200lb clear mono attached to 8/0 Cox and Rawle hooks was the preferred option at the business end. Unusually things were quite with no bites occurring after ten minutes. With plenty of fish showing on the sonar, mainly close to the hull, all sorts of suggestions were bandied around as to the lack of action. Prompted by the slow response to the tasty offerings below Norman Dunlop was heard to utter, “I’m having a sandwich”. Resting his rod on the gunwale Norman turned to walk towards the wheelhouse. Suddenly the rod arched over, then proceeded to exit stage left. Norman must have eyes in the back of his head for his left arm snaked out just managing to grasp the butt of the rod before it disappeared over the side. Reaching around with his right, grasping the rod above the reel he struck into nothing. “S**t” he uttered in the very same second as Ian Mulligan’s reel started to scream. “Fish on and I think that it’s a tope”, roared Ian. The line peeled off eastwards then the run slowed down briefly before accelerating again, text book tope behaviour. Ian locked down on the reel and drove the iron home. “Lines up boys, give Ian space”, ordered Eamonn Hayes, as the fight commenced. 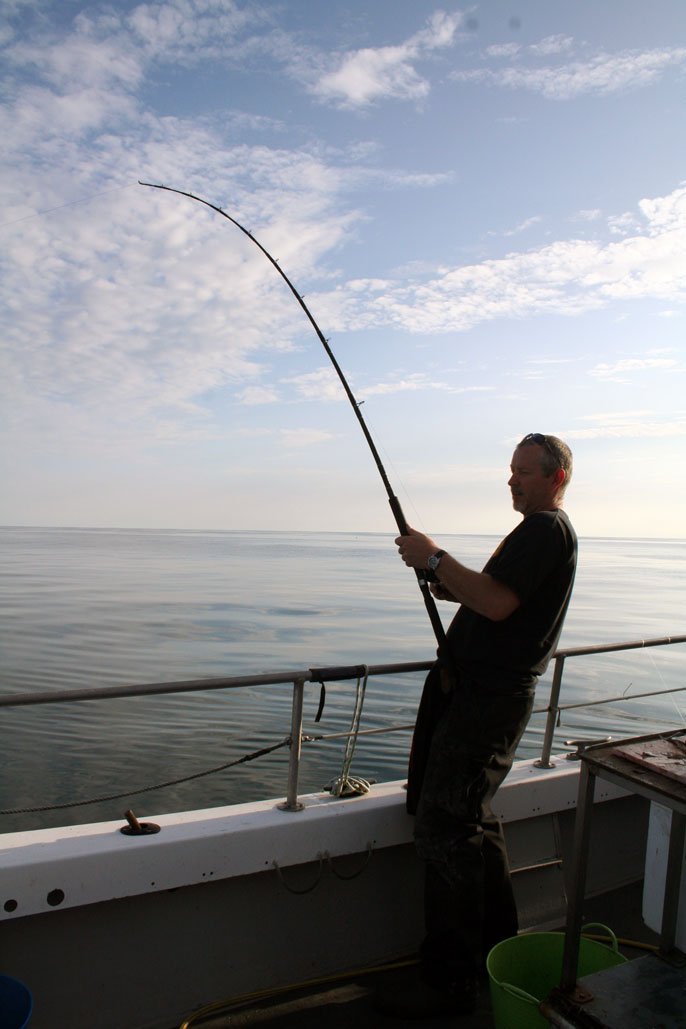 Five minutes later a spirited male tope in the 25lb bracket was netted, tagged, and returned to the water. In that moment it became clear why the wreck although showing good stocks of fish was not producing. A pack of tope was in the area preying on this ready made larder. Tackle remained the same but the mind set had changed. The crew was now ready on an action footing and did not have long to wait. “Fish away” shouted Norman, “me too” said Ian matter of factly as his line again peeled towards the horizon. All remaining lines were reeled in to prevent tangles. Ian let his fish run well away from the boat to allow Norman to play and land his fish. These fish were of a better stamp taking a wee bit longer to subdue. A glance at Norman’s tope when it was swung aboard put it in the thirty pound class, while Ian’s when landed banged the certified scales around to 43lbs, an Irish specimen.

The action continued apace with many dropped runs. Ian Mulligan boated a third, Gerry Mitchell and John Millerick each had a single, while Ashley Hayden bagged a double. All the fish, male averaging 35lbs, were tagged and released as part of the Irish Central Fisheries Board tope tagging programme. By session end the boat was buzzing. What a couple of hour’s action in weather that would have done the Canaries proud. This was no fluke either as Kilmore is well known for its male pack tope, the surprise was the place where they were encountered. In retrospect though, a fishy oasis on an otherwise featureless bottom is bound to attract the attention of predators at some stage. Autumn Dream just happened to be in the right place at the right time.

Normally tope are targeted close to and east of the Saltee Islands. They can run big at Kilmore Quay with fish in recent years to 72lbs tagged and released off the Autumn Dream. That is six pounds over the current Irish record. Late July to the end of September is the recognised period for tope in this southeast corner of Ireland, however as the above session proved, do not rule out an Indian summer to extend the season. As the Autumn Dream headed for home on that glorious October evening with the crew excitedly retelling and sharing their experience of that wonderful days sport, all knew that they had been to tope heaven, and that it lies south southeast of Kilmore Quay.