Considering investing in a small boat but confused by constant references to unfamiliar electronic equipment? Despair not as Planet Sea Fishing walks you calmly through an array of the essential and optional items available. Let’s start with VHF radio 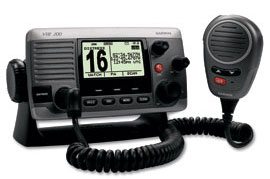 The very high frequency, VHF, radio is used for communication when at sea and around the harbour or marina. A marine VHF set is a combined transmitter and receiver and only operates on standard, international frequencies known as channels. The power required to transmit is minimal, all sets have the option of transmitting on either 1 Watt or 25 Watts and the lower power should be used whenever possible. Unlike telephones that allow you to both talk and hear at the same time most VHF sets require you to press a transmit button prior to talking. This is known as simplex. Duplex sets, which allow you to talk and listen at the same time, are available but are much more expensive. VHF radio waves travel in straight lines so the aerial should be mounted as high as possible, preferably at the masthead.

Modern, fixed VHF radios have Digital Selective Calling, DSC, installed which allows not only voice communication but also is capable of sending a distress signal at the press of a button and if linked to a GPS receiver allows the digital distress message to contain the vessel’s position.

This system was originally designed for military purposes and is owned and operated by the United States Department of Defence. It replaced the radio wave based Loran and Decca navigation systems. Between twenty-four and thirty-two satellites are arranged in a medium orbit grid around the globe, they are positioned in such a way that at any place on the earth’s surface a direct line of sight can be established to a minimum of four satellites. A fix is obtained by measuring accurately the distance between a satellite and the GPS receiver at a precise time. Because the exact position of the satellite is known, these distances provide position lines which are converted by a microprocessor within the GPS receiver to read outs of latitude and longitude. Originally GPS receivers only displayed text information relating to the position of the unit but most current equipment can display the positional information on graphical charts or plotters.

Most GPS units have an accuracy of about +/-10metres but some types of receivers use a method called Differential GPS (DGPS) to obtain much higher accuracy. DGPS requires an additional receiver fixed at a known location nearby. Observations made by the stationary receiver are used to correct positions recorded by the roving units, producing an accuracy greater than 1 metre. 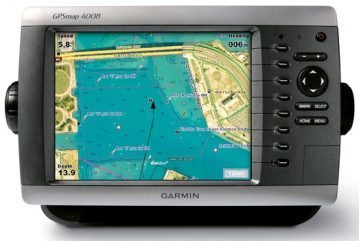 Typically a chart plotter consists of an antenna, mounted high on the boat, to track GPS signals and a display unit. The vessels position is sent from the antenna to the display unit which in turn shows it graphically on the chart. The chart itself will look similar to its Admiralty paper equivalent and show depth, land mass, navigational aids such as buoys and potential dangers in the form of wrecks and obstructions. The user can add way points to the chart and zoom in and out of the display. Chart plotters can be connected to drive an autopilot and/or send GPS data to a fish finder or radar. They can also interface with a laptop enabling complex passage planning to be done away from the boat and then entered into the chart plotter after arriving at the boat. 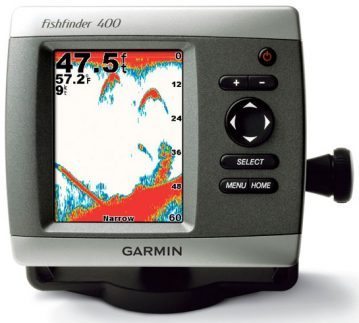 Fish finders work on the same principle as sonar. A transducer emits a narrow beam of high frequency sound. This is reflected by any solid objects and the time between transmission and receipt of the echo is measured. The speed of sound through water is known and so the range or distance to the sea bed can be calculated. That is then displayed in metres. Forward Looking Sonar (FLS) enables you to see the underwater hazards before you’re actually on top of them. A typical range for a FLS is 150 metres.
By developing this technology fish finders provide visual displays that can show the nature of the seabed over which the vessel is travelling in addition to the depth. The display screen use greyscale or various colours to differentiate the seabed from fish etc and accurate sets can identify individual fish as well as shoals.

Radar enables you to see what otherwise would be invisible. They offer greatest benefit at night and in fog or rain and are of particular value when close to shore or in busy shipping lanes. They consist of an antenna and a display. The antenna sends out a stream of radio frequency, RF, energy which is reflected back off hard objects. When this energy is bounced back it is converted to a signal which displayed to the user. The antenna rotates every few seconds, the display continuously calculates the direction of the antenna and so a precise bearing to the target is calculated. The time is measured for the energy to be reflected and so the distance of the target is also displayed. 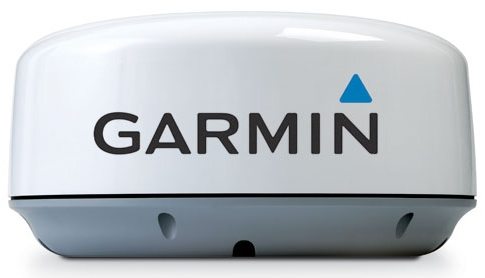 An Emergency Position Indicating Radio Beacon (EPIRB) is a piece of equipment designed to float free of a vessel in distress. It then sends a radio signal that can be detected by Search and Rescue Satellite Aided Tracking (SARSAT) satellites. They relay a message to a ground station that in turn can instigate a search and rescue operation and assist with locating the beacon. 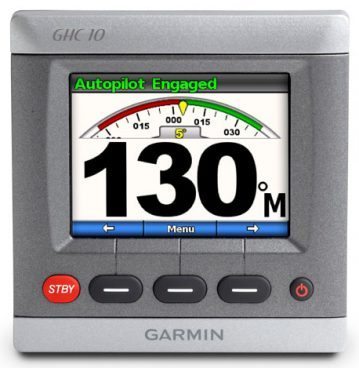 These are generally only fitted on larger boats. Standing at the helm for lengthy periods, monitoring instruments and keeping a good look out can be very tiring. An autopilot relieves the helmsman from steering the correct course leaving him free to maintain a proper watch. The autopilot can be set to steer a compass course. A fluxgate compass or electronic wind indicator feeds information to a microprocessor which then makes the necessary rudder movements to return the vessel to its required course. GPS/Chart plotters can be used to input navigational instructions to the autopilot by using tracks and / or waypoints.

Again normally only found on charter boats Navtex can perhaps best be described as a continuously updated telex service providing navigation and weather information within specified areas. An on board receiver, tuned to 518kHz, the worldwide Navtex frequency, will display the latest massages sent from a local station. The service is available up to 400 miles from the coast. 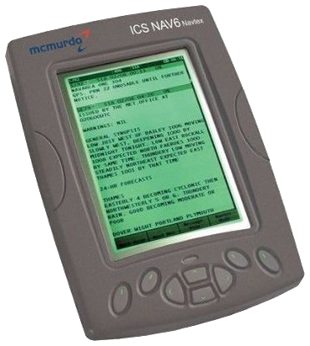 Use to convert a 12v, 24v or 48v supply and to a stable 110 v or 220v AC supply. The use of inverters is becoming more widespread with the increasing use of laptops, televisions, stereos and other domestic equipment on board boats.

Consist of an antenna, a modem and a normal handset. They are powered by an iridium battery. Their range is anywhere covered by in Inmarsat Mini-M satellite. Voice, fax, email and data can be transmitted.

Land of the Giants