Steve Souter holds on to his hat and his breakfast as he teams up with Alderney small boat bass expert Mark Harding to discover the ‘power’ of plugs afloat.

Twenty-five minutes after touching down in Alderney airport I was carving a path away from the harbour aboard ‘Ginger Ninja’, a smart Raider 18 small boat belonging to islander, Mark Harding. Before dinner, Mark wanted to give me a quick evening insight into what could be expected the following day, when we’d be splitting our attention between chasing late season turbot on the banks, and plugging around jagged rocks and precarious boils for some big lumps of silver bullion.

Plugging is Mark’s first love. His vast collection of lures underlining an obsession and addictive need to sling expensive bits of painted wood and plastic between, or straight down the throat of some murderous snags. Bass fishing with hard plastics is a flirtatious game of chance that could cost you £15-a-pop in losses, or just as likely see you connected to a head-banging, mirror-sided powerhouse that’ll pull you inside out as part of the package. Poppers, deep divers and every other type and colour of plug you care to mention lives in Mark’s big bag of tricks. 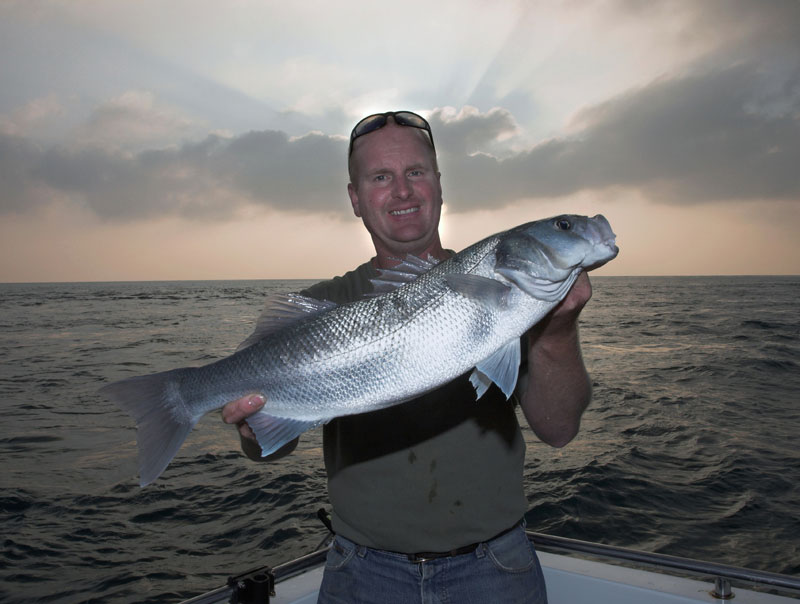 The swirling cauldron that Mark steered us into demanded intimate first-hand knowledge and careful navigation thereafter. For every crown of visible reef surrounding the boat, numerous other potential boat-splitters lurked under the surface: some barely water-covered; others betrayed by haemorrhaging boils hovering directly above them. Mark is expertly acquainted with the area and could point out hazards that were invisible to me. This was just as well, otherwise this 100 mph ‘hellfire and thunder’ introduction to Alderney bassing might never have been written!

The result of that short session was a pair of 5 lb bass for Mark and a pair of very dull pollack for me. If I wasn’t keen enough already, this tantalising taster of things to come gave me fresh incentive to drag my travel-weary carcass up before dawn the following morning.

Much as the whole plug thing had me suckered, you can’t come to Alderney, even at the tail end of October, and not have a tilt at the turbot banks. An Alderney resident, ‘bass-goggles’ Mark, purged his system of these regal flatfish long ago. The same could not be said of me however, and, after a bit of prodding, first light saw us drifting the south banks in search of a big bin lid.

Like a sodden black blanket, Mark’s lack of enthusiasm weighed heavy on both of us. He wasn’t confident of rumbling a late turbot, and went through the ‘must I?’ motions for my sake. I was determined to get a fish if only to prove my stubborn insistence had substance.

There were no fresh mackerel available locally but we had plenty of frozen gear including garfish, which Mark rates highly later in the season. I opted to fish a 9 inch lask of garfish, pinned between pennel 5/0 wide gape hooks, on a 5 ft trace of 30 lb clear mono. Mark fished a similar rig but with a single hook. The tide was strong and I used a 1½ lb watch lead to stay in touch with the bottom.The long first drift was a non-event, with baits retrieved untouched. 20 minutes into the second pass, with not the slightest sniff to speak of, Mark’s bass grounds were beginning to beckon. But then… a good bite. 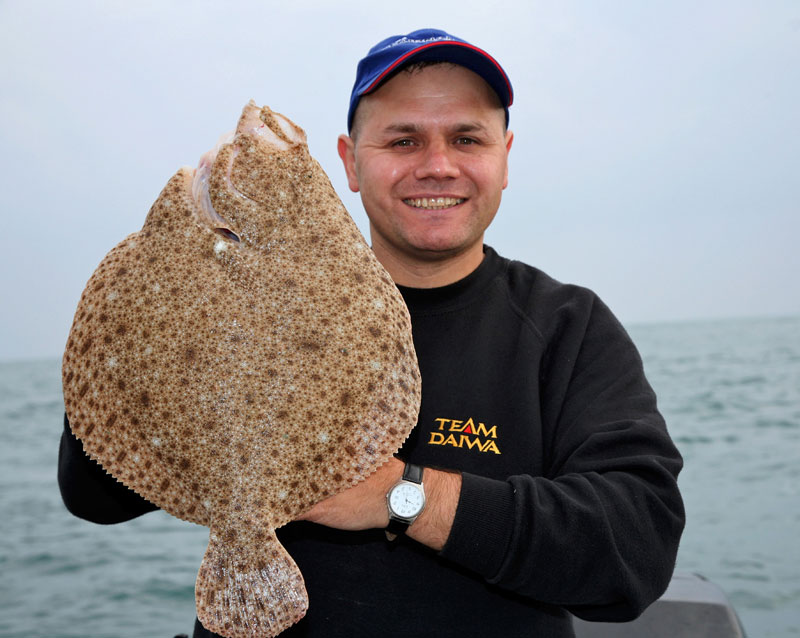 I was fishing with the reel in free spool, and released a generous amount of line in response to the first knockings. A minute or so later, the fish was still there. Taking up the slack, I lifted into definite weight and began ushering it to the boat. As a 5 lb turbot slid safely into Mark’s net, the value of the pennel rig was obvious. The bottom hook and the half the gar bait hung clear of the fish’s mouth, while the top hook claimed the fish. This wasn’t the 20 pounder on my wish list but it was proof positive of turbot at a time of year when nobody really bothers fishing for them. As fate would have it, the building tide forced our hand, and another hour spent battling the fierce flow was encouragement enough to head in for bass. It’s worth pointing out however, that I dropped another good fish during that time.

A few minutes hard steaming took us back to the scene of yesterday’s fiery baptism. The tide was hammering through here too, and we bobbed cork-like in the maelstrom middle. While my neck hair prickled, the man at the helm was a picture of calm.

My wrists were killing me after an hour of fruitless perseverance with a big surface popper. To Mark’s dismay, I slung my plugging gear in the corner and changed to single 2/0 hook on 10 ft of 20 lb fluorocarbon. A gar strip bait accounted for two pollack, a garfish and a small bass, before Mark, clutching a bent and bucking rod, yelled: “Yes, here we go!” 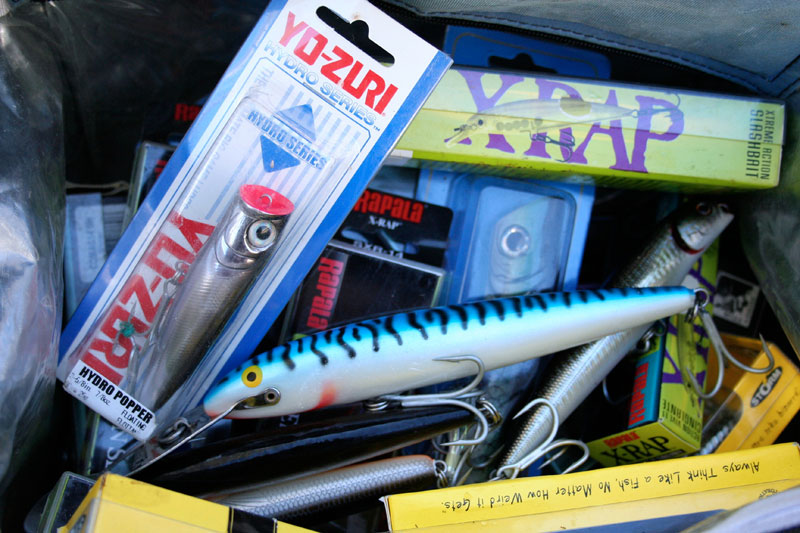 Mark knows his plugs, and while I was messing about, he had swapped his popper for a huge Rapala Magnum. These full sinking lures are essentially trolling plugs, and not designed for casting. However, Mark was about to prove that they can also be devastating when fished conventionally.

A fine bass of around 5 lb was rapidly followed by three more of similar size. Grinning from ear to ear, Mark slung me a slightly smaller black/sliver Rapala Magnum that had clearly seen a bit of action judging by the scared flanks. I put it to work right way and caught a damn pollack. Mark matched my pollack then followed with two clonking bass of nearer 7 lb. I could make excuses about having to get the pictures, but the truth was that I was receiving a lesson from a master plugger.

At times in the rocking rough and tumble, the boat felt as though it was passing through a paper shredder. Drifts had to be kept short as there was a serious risk either of grounding on sub-surface rocks, or colliding with one of the obvious ones. I don’t know which was worse: nervousness given my unfamiliarity with the frightening surroundings, or frustration at being given a plug thumping. However, the emotional tumult of the two together gives the impression of being facially clamped in a hot trouser press. 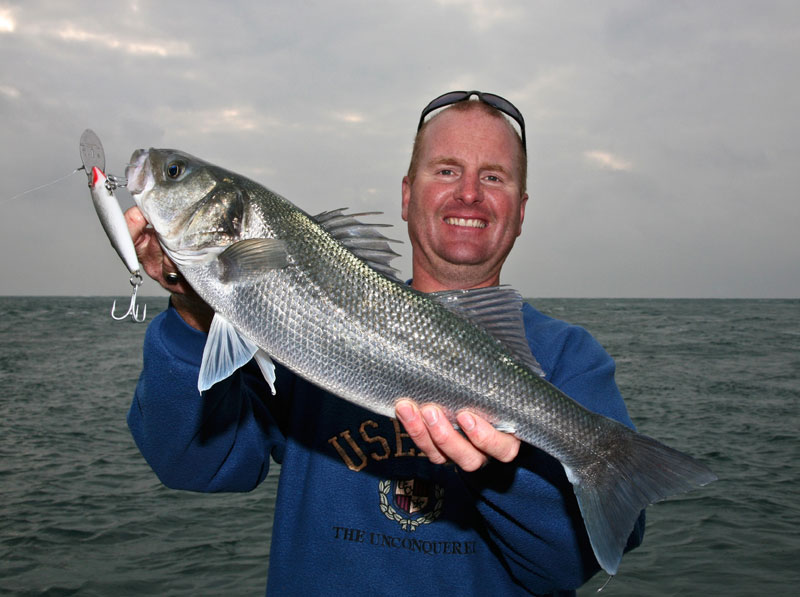 I couldn’t catch a decent bass to save my life and really needed to pay more attention to what Mark was doing. Mark could negotiate this area blindfolded, knowing exactly where the unseen areas of cover lay, even when they were completely submerged and not obvious to me. My conclusions were he was working his lure much faster than me, and that precision casting also had much to do with it. He was very deliberately casting between boils and close to rock, where I was just casting and retrieving blindly.

To make matters worse, when I did cotton on to the importance of accurate casting, I had several good bass follow my plug right up to the surface, only to turn and bolt back into inky blackness at the last second. I am convinced my growing tentativeness was transmitting down the braid to the spooky fish. The third time this happened frustration got the better of me, and I couldn’t help jumping up and down like an angry troll. Mark was laughing his girly pink socks off; enjoying every second of my mental disquiet.

To close the session and really rub it in, Mark slugged out and won an epic battle with a dream bass of 9 lb 10 oz. Three times the broad-shouldered sliver slammer came almost to the boat, and three times it dropped a gear and streaked off like a bolt of lightning just inches from the waiting net.

We were edging ever closer to a threatening rock, and eyes in the backs of our heads were required given the uncomfortable proximity. This time when the big fish came within range I stretched out and scooped it into the net, ready or not. With scant time to spare Mark abandoned his rod for the wheel, and whisked us full pelt into less testing waters… this was indeed fishing to take your breath away in more ways than one. 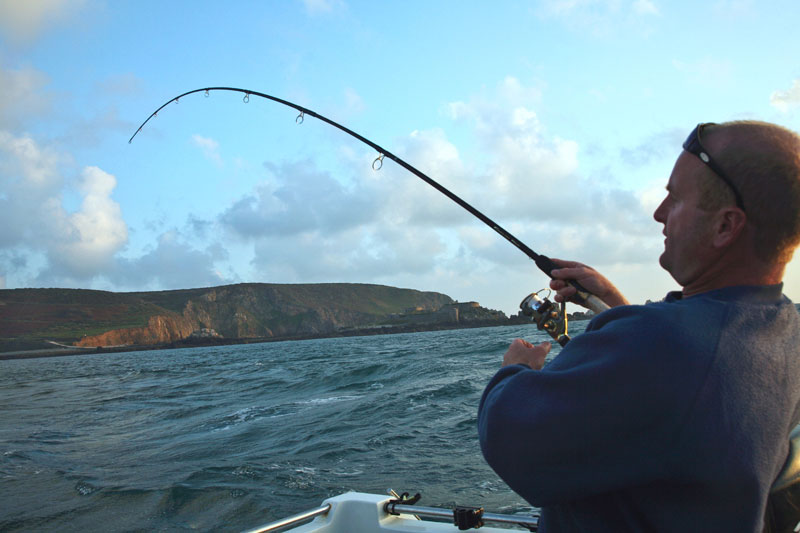 With Mark’s bass obsession sated for the time being, and my plug donkey-ism really getting me down, we charged back to the harbour. I might have previously believed that plugging afloat was for a game for hairdressers, but all that had changed. Having witnessed the proof of the pudding, a quick note to self read: “Must get to grips with this plugging lark and stop MH having it all his own way next time.” A note to Mark read: “You don’t catch many turbot on plugs!” 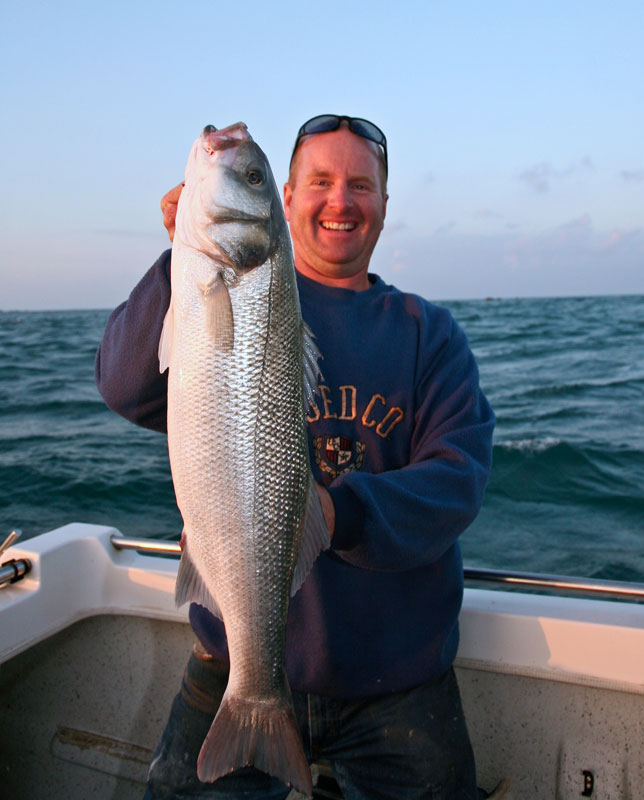 Core tackle is a heavy spinning rod of between 9 and 11 feet, paired with a medium-sized fixed spool reel loaded with a good quality braided line like Mark’s preferred 14lb Berkley Fireline Crystal. Plugs for the job are either surface poppers, or alternatively, deep divers. The Storm Saltwater Chug Bug in Metallic Silver Mullet or Tennessee Shad versions are choice poppers, while full divers like the Rapala Countdown Magnums CD11, CD14 and CD18 in Black/Silver and Silver/Mackerel patterns should be top of the shopping list. Remember this can be an expensive game: Mark lost three big plugs to the rocky bottom on the day, which equates to a near £40 hole in the pocket…ouch!

Bass are most active on spring tides. Think May onwards for Alderney bassing. Boats drifting the marks with live baits from May through to November take some stunning catches and good numbers of fish to double figures. Plugging afloat is normally best between August and late November.

Shore bassing doesn’t normally come alive before June. Autumn is good for large bass from the shoreline, with big baits and dark evenings the best recipe for bigger fish.

Flight details are available from Aurigny

Alderney Angling offers Bed & Breakfast accommodation with free use of a courtesy car.