Raiders of the Channel Wilds

It’s pedal-to-the-metal time for Steve Souter as he pushes offshore to sample the fantastic Alderney tope fishing out beyond the notorious Casquets rocks.

The engine might even have hummed ‘Mack the Knife’ as the Raider 18 cleaved a wicked white scar in the sea’s almost perfect skin. Mark Harding studious at the wheel, and I, spoke little, enjoying instead the wind in our faces as we fizzed offshore to a spot beyond a renowned group of jagged islets named the Casquets.

These Casquets are found 13 km to the northwest of Alderney and are both culprit and killer in a legacy of shipwrecks galore. A line from 1869 novel ‘L’homme qui Rit’ (Laughing Man) by French author Victor Hugo, states the obvious in declaring: “To be wrecked on the Casquets is to be cut into ribbons”. 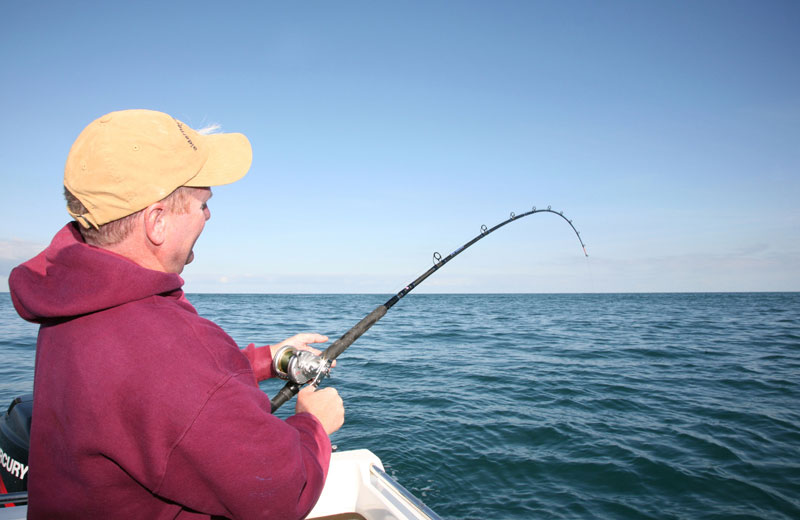 Most famously perhaps, in 1744 HMS Victory was lost here after reputedly running aground. Likewise, in 1899 the tragic passenger ferry SS Stella struck rocks in fog, sinking in 8 minutes with the loss of more than 100 lives. In 2006, the Cherbourg-based fishing trawler ‘Kleine Familie’ sank close to the dreaded Casquets in more sinister circumstances after an alleged collision with another vessel.

Smirking like Jack the Ripper on a hot date, Mark assured me we wouldn’t be steering anywhere near close enough to court catastrophe. But having experienced some of the right ropey places the ginger-headed tyrant wriggles in and out of for bass, I was no less disturbed for this assurance.

We’d glutted on bass in recent days, and the focus now was on another Alderney species ‘A’ lister – tope. Skipper Mark was not lacking in confidence as he made for the magic numbers displayed on the chart plotter. He bravely promised rabid tope aplenty during the latter stages of the flood when the tide ran just right… but first, he proposed a little diversion. 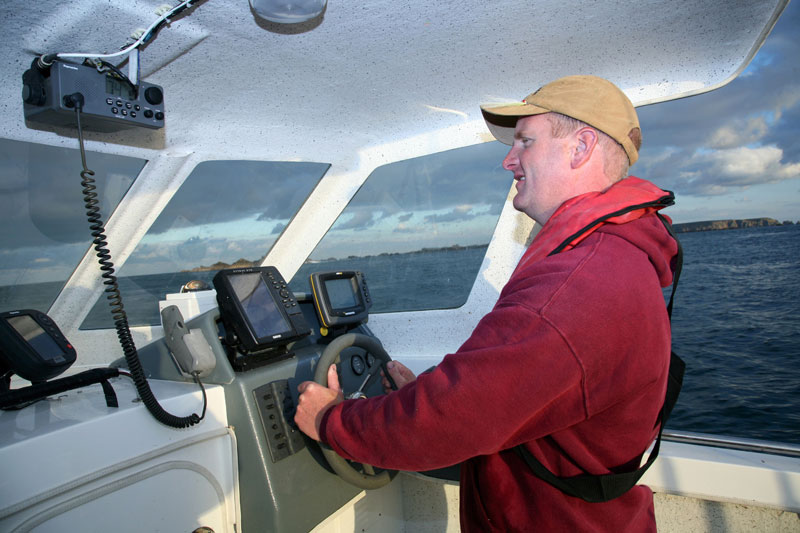 With time to play with, Mark angled eastward intent on investigating a series of reef marks reputed to be swarming with brawny pollack. Fishing on the drift, 7-inch jellyworms worked tantalisingly on long flowing rigs battered numerous pollack to 9lb before the clock hastened us on to our real purpose out in the Channel wilds.

In clear sight of the Casquets, the sounder showed a pronounced slope from 90 feet falling away to 130 feet at the bottom. The boat was anchored so that baits would drop back and tickle the base of the feature. Mark described the ground as ‘clumpy’ with an odd grabbing snag but nothing serious.

The dangerous temptation is to man more than one rod each when numbers of tope are anticipated. This however is a gamble that can go horribly wrong when fate sees multiple tope blast off at the same time, and you discover that you are not in fact an octopus, and haven’t got enough limbs to deal with the ensuing fracas. Mark and I prepared one rod each. I used a Team Daiwa 12/30 boat rod and Saltist STT30TH reel loaded with 30 lb braid. The rig was a simple five-foot length of 250 lb co-polymer to a strong 8/0 hook, ahead of a 1 lb lead clipped to a sliding boom. 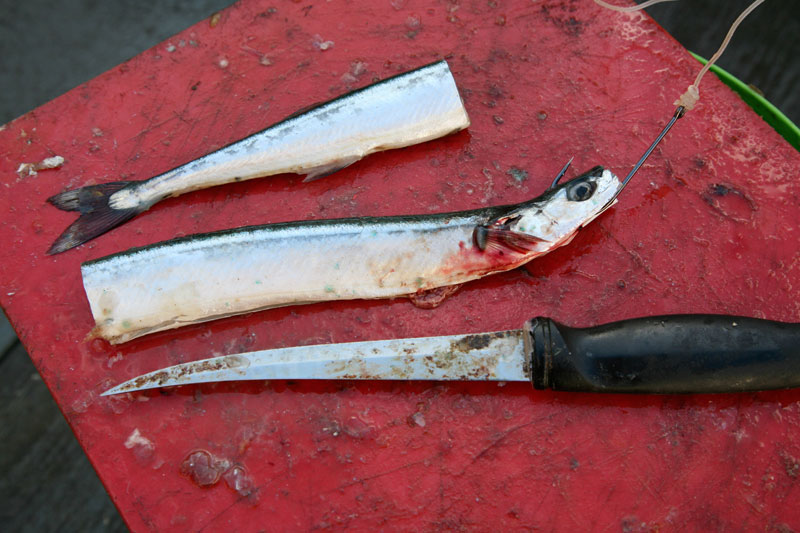 Give me fresh blood-filled mackerel for tope every time I say. Problem was there weren’t any mackerel anywhere that we could find. Back-up was a selection of alternative frozen fish, including a block of iced garfish. Now gar flesh isn’t a bait I had previously used for anything other than cannibalistic garfish until this visit to Alderney. But since venturing over here, this perhaps unorthodox bait, had caught me turbot, bass, bream, and pollack. Now we’d see if it would return on tope.

You can tell when Mark is attached to a substantial fish because the gob switches off, and the skip-cap gets swung back-to-front, much like Clint Eastwood’s cross-eyed brother would do before a dust up in ‘Any Which Way But Loose’. The cap went backwards 10 minutes later: the silence, those ‘make-my-day’ eyes, and an arched rod all very telltale. 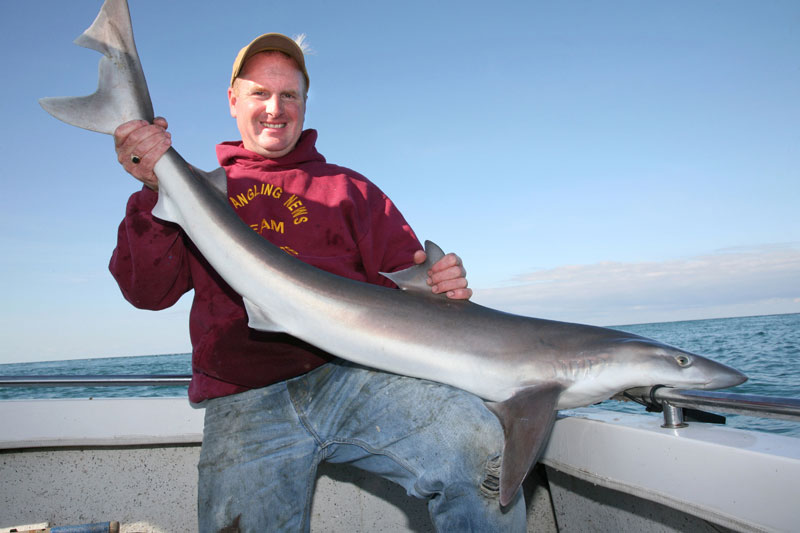 It was simply sod’s law that the fish managed to swim around my line, but a rapid bit of over-and-under rod weaving righted matters. In signature tope fashion, the braided line towed uptide as Mark kept the pressure on, ushering the leader onto the reel and a dark shadow into grabbing range. A tope of maybe 35lb came alongside flailing and Glasgow-kissing the surface; sending several angry plumes of saltwater straight into my face as I lent over to grapple it safely inboard. 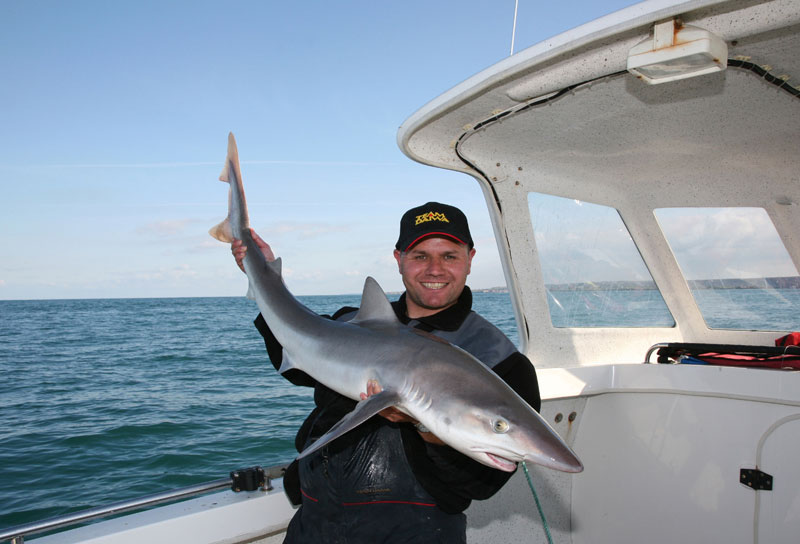 There was no time to exchange pleasantries as my rod dunked signalling tope number two. Somehow I managed to shunt Mark’s tope into his outstretched arms, and twisted to rescue the escaping rod. The fish was still there, but the contest wasn’t the expected rodeo, as what I first took to be a small tope, offered little firm resistance. To my surprise, a placid 40 pounder calmly spilt the surface film. As it did, both Mark and I noticed a bigger one shadowing and quietly peeling away as the lead fish breached.

Mark and I went fish for fish for the next two hours without let up. I would slip a fish back only for Mark to bend straight into another and vice versa. Several times more shadowy companions were seen ghosting away at the last, and if this was the norm, then it is no wonder that Mark felt confident enough to guarantee a tope fest before a line had been wetted. Most fish were in the 30 – 40 lb bracket, with the odd smaller ones. The gar baits were certainly the ‘mutt’s’, as they systematically accounted for about a tope every seven or eight minutes. I honestly do not think that fresh mackerel could have caught us any more tope within that hectic spell. 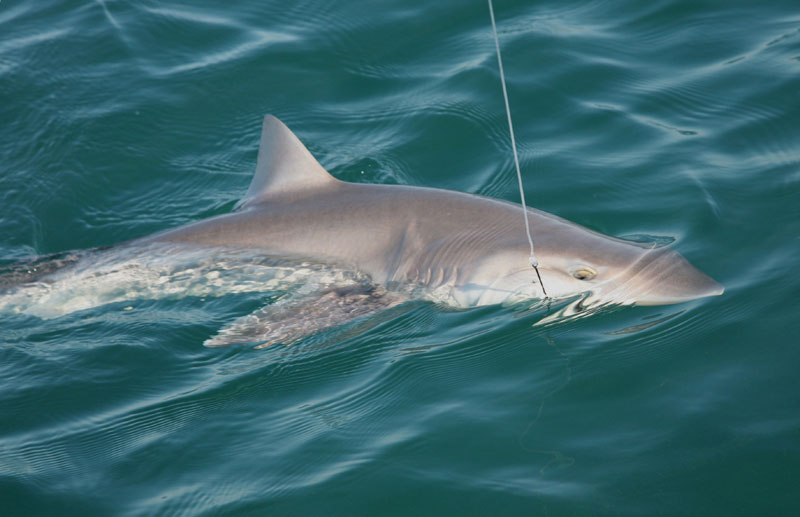 As the action fell away we hauled anchor and had a spell drifting. We continued to catch but with less regularity. Notably while on the drift, I was obliterated by a seriously big tope that put its head down and tore straight for France with no intention of stopping. Foolishly, I dialled in more drag than was probably prudent at that point, and was consequently burst off… an ill-advised decision. Under the drape of a golden twilight, with the wind born of the boat’s speeding passage once again washing over our now sun-wearied faces, we left the tope in peace.

The waters surrounding Alderney offer a diverse array of fishing and species. Despite ideas to the contrary, there is mixed fishing here all year round. The general tope season runs from April to December, while the autumn months are best for reef pollack.

Flight details are available from Aurigny

Alderney Angling offers Bed & Breakfast accommodation with free use of a courtesy car. 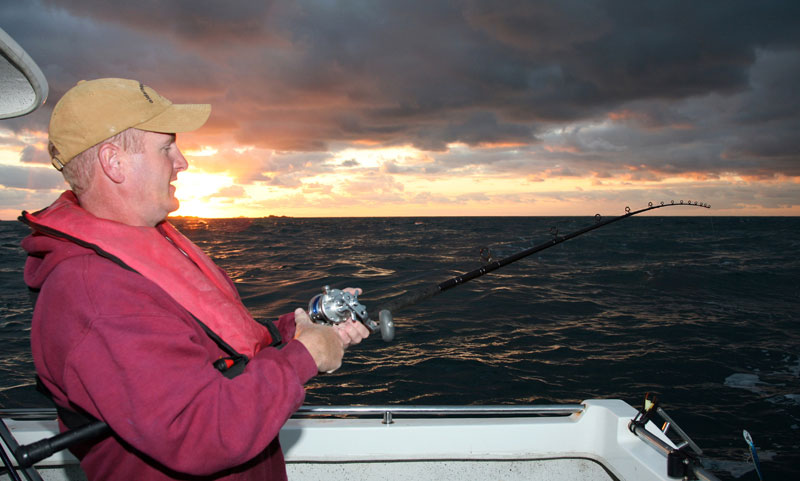