Des Westmore hooks up with Lymington charter skipper Rob Thompson & crew for a crack at the offshore ling fishing, shattering his previous personal best fish in the process.

I organise nearly all my charter trips, so an invite on an outing where the slog has been done by someone else and where all I have to do is turn up and enjoy the fishing, is hard to refuse. When Dave Cheal asked me if I was interested in a wrecking trip for ling, I was doubly interested. With no organising to do and the opportunity to better my personal best ling that stood at a paltry 9lb, the offer was a ‘no brainer’. 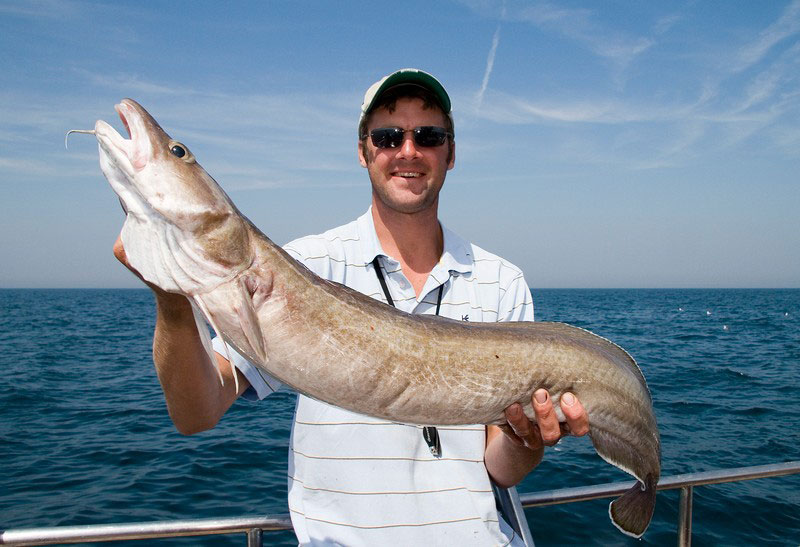 The trip was on Shogun skippered by Rob Thompson out of Lymington. This was the first time I had been on a trip specifically set at targeting ling. Before, it had always been a case of speculative dabbling for ling at certain stages of the tide, and a far cry from the Plymouth paper reports of my youth where huge catches of ling were a regular occurrence. In those halcyon days you needed a mighty ling over 30lb to get your picture in the press… my goodness, how times have changed.

Great weather greeted us and we passed the Needles on a perfect glassy calm summer’s morning. We had a long steam to look forward to, which provided plenty time to prepare gear, and for skipper Rob to mercilessly slaughter Dave’s iffy knot tying. Most of the anglers opted for a flowing trace of 250lb mono and a strong hook. I chose a 9/0 Eagle Claw while others went with catfish-style hooks and wide-gape Sakumas which easily cope with big ling. In truth a 100-150lb trace would suffice, but there is always the chance of connecting with a serious eel on a trip like this, hence the reason for the 250lb mono which will also withstand the rasping attentions of half-a-dozen pesky strap eels. We needed bait and stopped to feather some mackerel. It didn’t take long and Shogun’s crewman quickly prepared plenty of mackerel flappers on the way to the wreck mark. 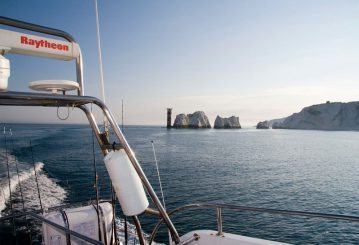 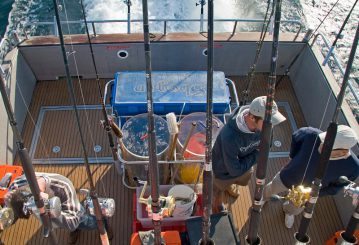 Fresh bloody flappers adorning all the hooks were lowered away to the seabed. The ebb tide was still running hard and around 1¼ lb of lead was required even though we were drifting the wreck to begin with. Steve ‘Wilf’ Moore’s rod bent into a fish within minutes…and it looked decent given the considerable bend in the heavy outfit. In a heartbeat Dave Cheal was also into a good fish, and both anglers soon had ling at the side of the boat. Ling don’t react well to changes in depth and are virtually impossible to return, but these lovely ling were destined for the table and were quickly gaffed aboard. Dave was all smiles as he and Wilf posed with their catch.

As the tide dropped away towards slack more ling came to the boat. Most were low double figures and there was the odd conger taken too. I remained ling-less however. With the tide slackening rapidly, we changed tactics and got the anchor down. Milo Pragnell took a fine bull huss that was probably around 15lb. Brian Gourley had been campaigning an antiquated Abu Pacific rod… it did the trick and he got his ling. 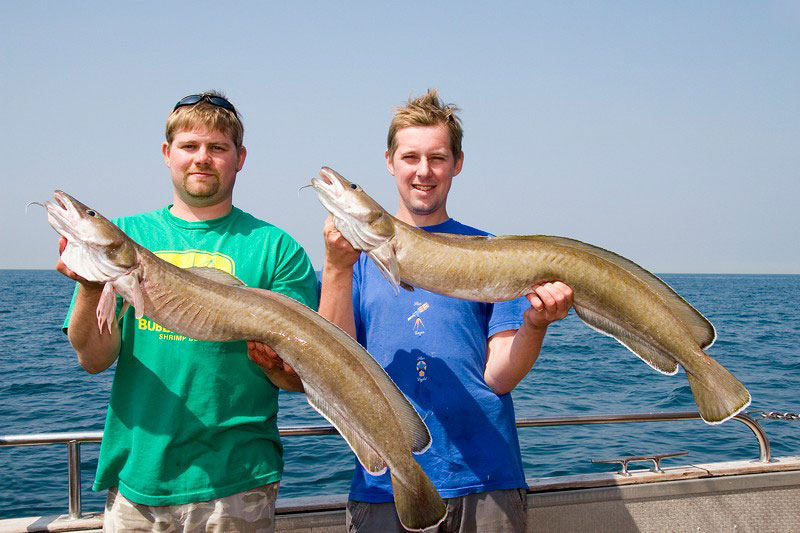 As the flood tide began pushing though I persuaded Brian to indulge in some hands-on tackle testing with the multi-piece 20-30lb Shakespeare Ugly Stik travel rod and Boss Accurate 270 two-speed that I had brought along. Despite its 20-30lb rating, this is a pretty stiff rod and it has to be said that Brian didn’t warm to it. The same cannot be said of the Accurate which he rated as superb and wanted to keep.

Milo Pragnell’s good day’s fishing continued and he boated the first ling of the flood. I fished with the Shimano Tyrnos 12 two-speed reel all day, but I have to confess that the small fish I caught between taking pictures really didn’t challenge the reel. Despite its relatively small size, the Tyrnos is a power-house, and I couldn’t help but wonder if I should have given it to a more prolific ling angler. 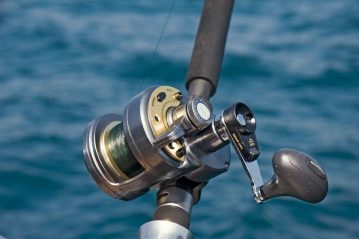 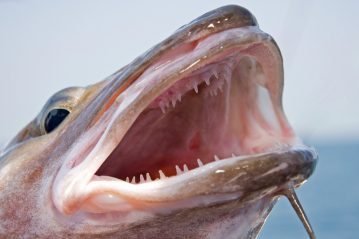 Ling are voracious predators with impressive nasty dentistry. For fudge-fingered reasons that I’ll leave to your imagination my flappers kept coming back mutilated, so hoping for a change of fortune, I switched to a more compact mackerel head-and-guts offering. Within minutes of this touching the sea bed I was into a decent fish that I silently prayed was a ling. I cranked away hard on the Tyrnos to see how much pressure it could generate. Rob remarked that I was hauling and not pumping the fish to the surface, and I was at pains to explain that I was using the lower (2:1) gear. This answer seemed acceptable though one wag amongst the crew did ask if I also have a Stannah Stair-lift at home. I retorted that if they would send me one to review then I would!

I used a T-bar to unhook my first ‘proper’ fish of the day. I was just then given a graphic demonstration of the malevolent affect of ling teeth. At 15lb 13oz, this was ‘personal best’ for me and I wanted a photograph. Unfortunately the stomach was in view so I did my best to push it back out of sight using my rolling pin ‘priest’…and could not get the priest out of the fish’s mouth! The super-sharp teeth are all angled back towards the throat and it is a one-way trip for anything that gets in there. I dropped another mackerel head to the seabed and was rewarded with another ling almost straight away. My ling are clearly like buses which always seem to appear two-at-once after ages spent waiting. 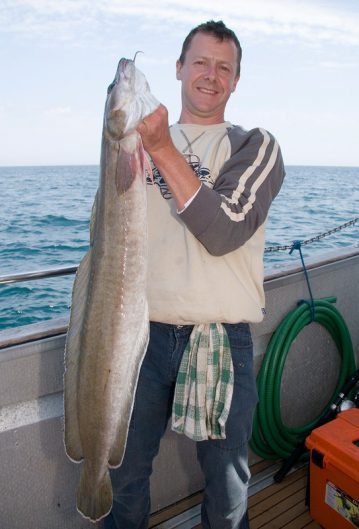 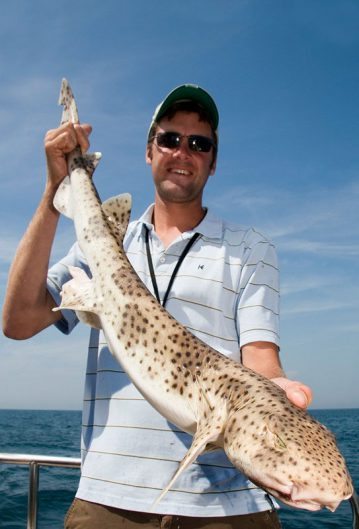 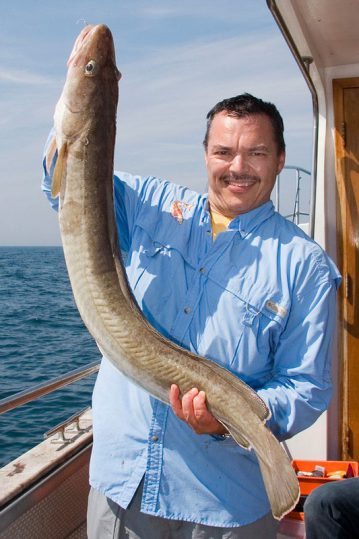 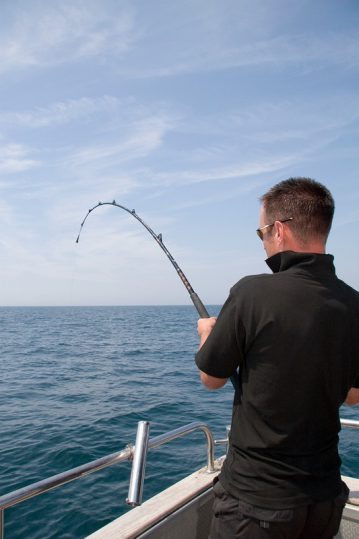 More fish came to the boat but it was Lee Framton who had his rod well and truly bent by something significantly bigger than anything seen so far. After much panting and heaving Lee eventually ushered a massive conger eel alongside the boat. Skipper Rob did a great job of chin-gaffing and hauling its considerable bulk aboard. After a quick picture the thing was returned via the handy gunwale door. Rob knows his eels and estimated this one between 80 and 85lb. After a few more fish that failed to set the world alight, the ever increasing tidal strength signalled the end of the day and we made for port. 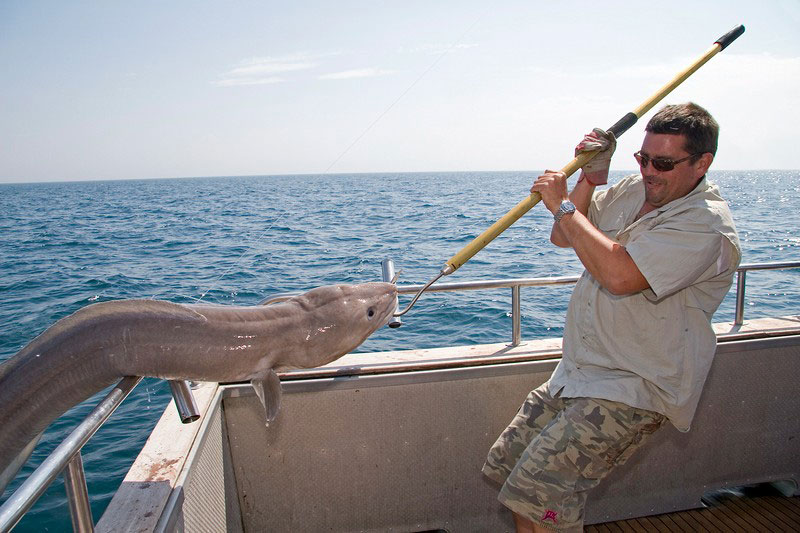 It had been a successful day but a far-cry from those humungous Plymouth catches of the 70’s. Talking of that port, I spoke of our trip to Plymouth native Ross Wilkinson, the general manager of Navimo UK at Hedge End, Southampton, who said that he always fishes for ling using a two-hook paternoster style rig. None of us tried that but I bet a few West Country readers are nodding sagely as they read this.