Key West, Florida waters teem with sharks of the black-tip, spinner, nurse, lemon and hammerhead varieties. An opportunity to get afloat and lock horns with these shallow water powerhouses proved impossible to resist for England International shore angler, Paul Stevens.

Skipper, Kevin picked me up at 8am. During the short run out to the mark I enquired about the ‘spinner ‘sharks, as I had never heard of them before. Apparently, they are similar to black-tips, but the difference is as soon as they feel a hook they explode clean out of the water &lsquo;spinning’ in mid air… hence the name. These aerobatics are an effective means of escape too, as, on average, only one in five are actually landed. The reason for this is the line coils around the spinner’s extremely abrasive skin and consequently bursts. 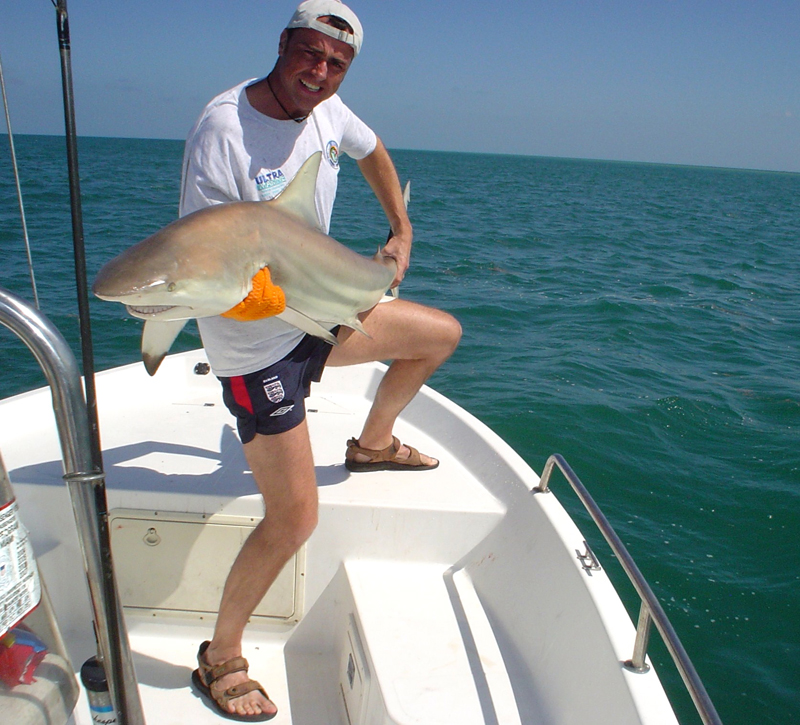 Skimming full pelt across the shallows out from Key West, the trip to Kevin’s favourite sharking ground took only five minutes. We anchored in about 25 feet of water and began bait fishing. This was straightforward and involved a small piece of squid on a size 2 hook, plonked over the side with a ½ oz lead. Within seconds of touching bottom the tip yanked over and a half-pound snapper was in the boat. The little size 2 in the corner of its mouth was removed and replaced with a meaty a 6/0 through the back. The live-bait was then tossed 40 yards behind the boat under a balloon.

Fairly light tackle is used for this type of fishing – basically heavy spinning rods and medium-sized fixed spool reels carrying and only 20lb line. I hoped the gear would be man enough for the job!

While I was busy filling up the live well with snapper and blue runners, Kevin was chumming with frozen blocks of fish mix, and loose feeding frozen threadfin herring. Smiling, he told me that it would take half-an-hour for the chum to work and my pain to begin… and I had both faith and fear in his confidence.With the bait-well full, we had two rods out the back of the boat – any more is asking for trouble as multiple hook-ups are very common once the chum works its magic. The reel drags were set lightly, which is essential because these sharks will generally drop the bait if they feel any resistance. 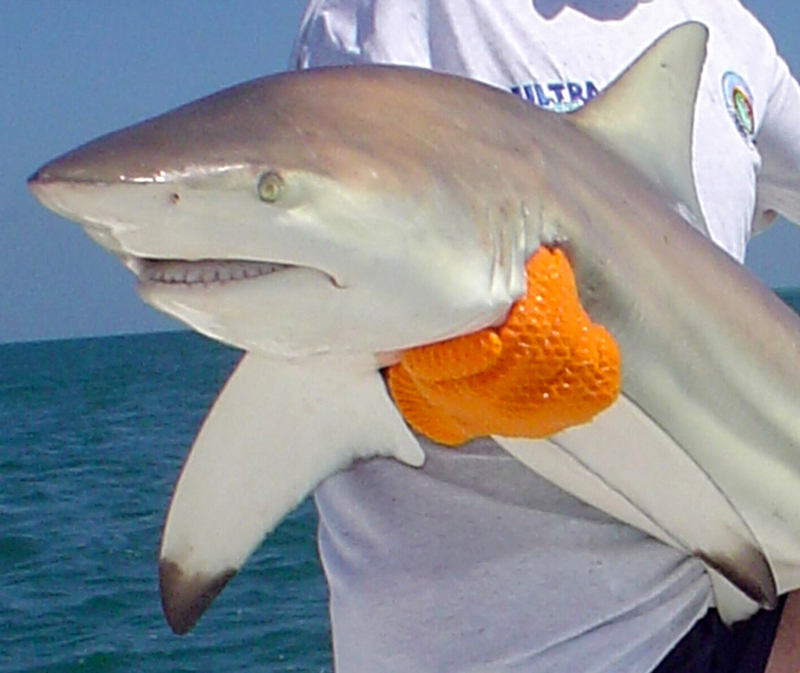 The half hour mark arrived with no hits evidenced. Kevin was scratching his head wondering where the sharks were? “I know what will get them going,” he said, reaching into the well and pulling out the biggest blue runner we had. At 2 lb it was a good mouthful. He gave it the 6/0 treatment and lobbed it behind the boat. Kevin winked and said, “That will sort them out”. Not a minute later the rod lurched over, and line started spilling off the reel. I grabbed the rod and released the bale arm to allow enough time for the shark to find the hook before I striking hard… once, twice, and three times.

Instead of the line flying off the reel at speed, it peeled away steadily with undisguised authority. I had an inkling of what I was dealing with, and Kevin’s knowing eyes confirmed it as a nurse shark. I’d caught a couple of these the previous year, and while they are not renowned for sizzling runs and speed, they’re still very powerful and quite a handful. I’d been fighting the fish for about 15 minutes when suddenly the hook pulled out. I wasn’t amused, but the day was young and the chum trial had only just started working. Kevin rigged another live bait, casting back to the same spot before replacing the rod in the holder.

About five minutes had passed when the second rod slammed over, but by the time we got to it the shark had dropped the bait. This frustrating scenario was repeated another twice before we hooked up again.

This time is was a spinner, and boy, they weren’t kidding when they said these jump! As soon as it felt the hook it leapt six feet clear of the water, spinning frantically in an attempt to break free. Kevin shouted to drop the rod as it landed. I obliged and preying that the line would hold. He explained that if it remained hooked after the third or fourth jump then we’d have a chance, as they generally slug it out under the surface after this stage. The second and third jumps and spins came and went… and the line held. Kevin freed the anchor as we gave chase. 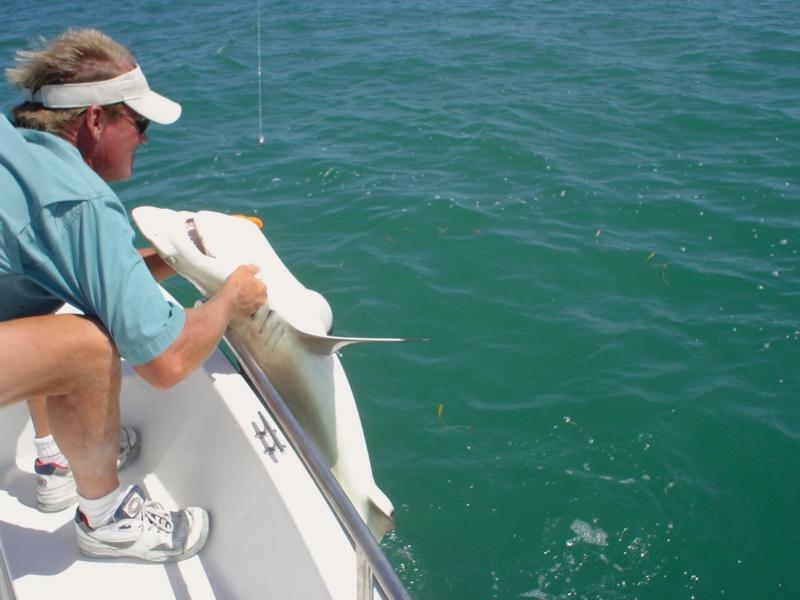 With such light tackle, chasing is necessary to avoid being spooled clean. As predicted, the shark stayed down, setting off on a series of searing runs that stripped many yards of line each time. Finally, tired, sulking and hanging in the tide, we got to the subdued shark. After a 25-minute fight we had it by the side of the boat. Kevin reached over and gently hauled it aboard for a quick photo, before releasing it. Fantastic! What a fight and what a fish, one spinner hooked and landed… not bad stats.

A fresh bait was tossed into chum trial where more and more sharks seemed to be gathering. Another shark struck minutes later. I struck and line whizzed off the reel before the bait was dropped. Kevin sympathised, and was changing the bait when next the right hand rod keeled over. I grabbed the rod and let it run before flicking the bale arm over and striking hard. Again, line screamed off the reel but this one stayed on. Numerous ripping runs ensued until 20 minutes later I drew a beautiful black-tip of 80 – 100 lb to the boat. Kevin bravely manhandled her aboard for picture purposes before releasing her back into the sparkling blue waters.

The fishing was all-action fishing once the chum started working. Kevin had another group to pick up at 13.00, so the ‘last cast’ cry went up. My arms were aching, but I am a glutton for punishment and hoped, even expected, another hit. I wasn’t disappointed. Naughty nurse Again the right-hand rod slammed over. I smacked it upwards and was met with the slower power of another nurse shark. The difference this time was it didn’t stop! 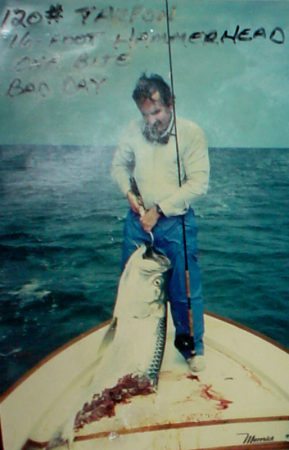 Kevin only tends to drop the anchor when one of the faster running sharks is hooked, but this nurse was steadily emptying the reel. In a flash, the anchor was released, engines were fired and off we sped in pursuit of what was surely my biggest nurse. Kevin positioned me directly over the shark so that I could apply maximum pressure… no easy task with light tackle and just 20lb line.

Every time I gained a few feet of line, it just swished its huge tail and towed back to the seabed. The toing and froing went on for 10 painful minutes with no quarter gained or given. Something had to give and I prayed it wouldn’t be the line, or even the rod, as I applied risky extra pressure. I wound down and pulled hard upwards. The line sang, the rod was buckled and the great head lifted once more. Reeling down fast I pumped the dangerously hooped rod. I won back a little line, but I could feel the shark trying to get its head back down with every turn of the reel.

Now don’t do this next bit at home. The drag started to surrender line again and in unthinking desperation I wrapped my hand around it to prevent any give. It was a stupid thing to do, but hey, heat of the killer moment and all that! Luck was with me as everything held, and my fingers stayed attached. I managed to coax the shark to the surface. She was big – maybe as big as 180 lb – and a fine catch on such light tackle. Kevin expertly unhooked her and we watched as she swished and gracefully disappeared.

This really is an exhilarating type of fishing, just minutes from the stunning harbour, and in full view of all the restaurants fronting Key West. A trip is easy to arrange and offers so much for wives or girlfriend too. My adventure was arranged through ‘Almost There Charters’. They provide an absolutely first class service and know exactly where the fish are. If this has got your boat rocking then ring Scott or Joe at ‘Almost There’ and they will arrange everything for you.

Taming the beasts of winter