In Search of the Abominable Sea Wolf

A niggling need to catch an elusive fish that is armed to the teeth with teeth takes Steve Souter to Iceland’s West Fjords, where he comes face to face with a procession of growling wolffish.

If there were fishy prizes for ugliness, bull-necked power and sheer bone-crunching nastiness, then the wolf fish would surely clean up. In the company of a SKY television crew, some friends and I had taken a short internal flight from Keflavik to Iceland’s West Fjords region to fish explicitly for these snarling nasties, and I had two whole days to get them out of my system. 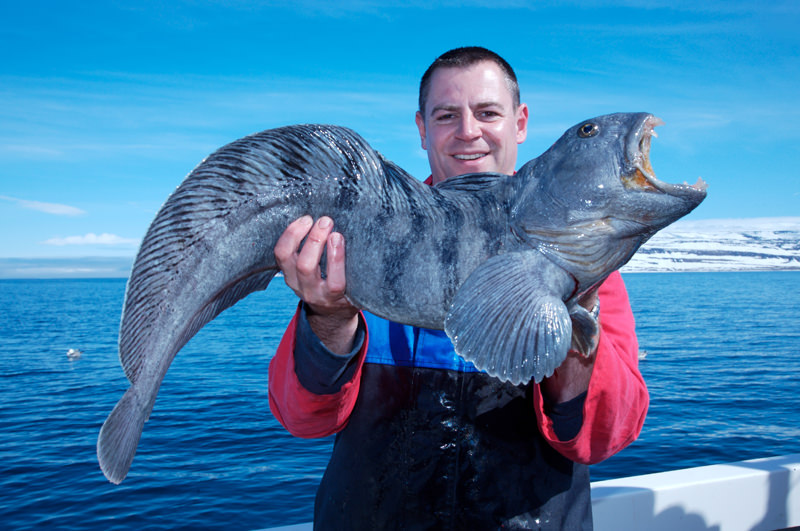 Having only ever fluked a handful of what are also commonly referred to as ‘cats’ or sea catfish over the course of many years home cod fishing, my previous experience of these bruising fish was far from extensive. This was something that I was determined to work on, and there seemed no better place to do that than in Iceland’s prolific West Fjords. Within an hour of touching down at Isafjordur airport – it’s little more than a landing strip really – we were on the boat pontoon at Sudavik being greeted by our German skipper and guide, Matthias. Like many German anglers Matthias has fished Iceland for many years, and his love affair with the country and its fish are why he now spends the whole summer season working as a full time fishing skipper in the West Fjords.

He assured us that although we had come a little early, there were good sized Steinbeissers – which is what they call the wolffish / catfish – to be caught within 40 minutes of the berth. Tony Voss and I flung our gear and ourselves into one spacious Somi boat with Matthias. Dave Proudfoot and Steve Mason of Icelandic Fishing Adventures climbed aboard an identical boat and would shadow us. If previous experience was anything to go by, we knew the area was likely to be jam-packed with hungry cod in the 5 – 8lb range. Cod abound in such numbers that avoiding them can be very difficult. I spoke to Matthias at length to glean some pointers on how to dodge the cod and get the ‘wolfs’. He smiled and told me it was not easy, but that he knew several marks where there were good numbers of wolf fish, and that we would catch them.

There are very few places around the UK where you know that good fish are going to hang themselves as soon as your gear touches bottom. But we weren’t in the UK and this is exactly what happened as soon as we stopped the boat. Knowing that members of the Icelandic cod army would throw themselves at any pirk, shad or other lure dangled over the side didn’t stop us indulging in a bit of gluttony before turning our attention to the task of those demonic wolffish. 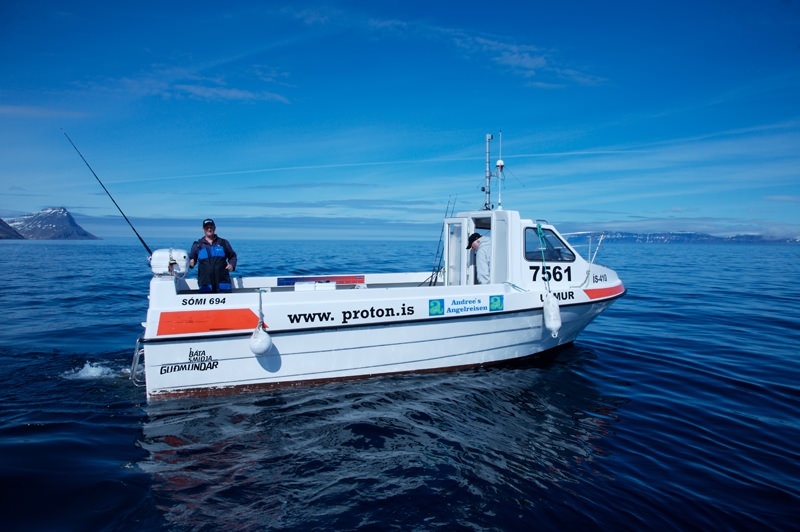 Although wolf fish are caught on pirks and lures, bait is the best way to target them. I had been sent a DVD of German anglers enjoying fantastic numbers of wolf fish, and I paid close attention to the rigs and baits used. Essentially a heavy two-hook paternoster rig constructed in 100lb mono, carrying meaty 5/0 hooks and baited with strips of squid was in order. I had several rig variations stashed in the tackle bag and invited Tony to help himself. 1lb leads took our baits to the bottom in around 50 metres of water. Predictably cod accosted every hook in sight, with Tony and I both taking fish just short of double figures. While the very enjoyable ‘dunk-dunk bend’ monotony continued for me, Tony struck into a gentler bite that eagle-eyed Matthias immediately called as “Steinbeisser!” The fight was markedly different and more sustained than the nodding resistance of a cod. Tony slugged it out and grinned from ear-to-ear as a furious 5lb wolf fish growled its way to the surface.

Tony’s joy had everything to do with this being his very first wolf. It would prove to be the first of many. Delight quickly turned to fear as Tony made to remove the hook and the fish made to remove his fingers! It was a near thing, and Tony knew it judging by the girly scream and the ‘white-as-a-sheet’ colour that he turned. These brutes are all head and teeth with the demeanour and vicious intent of a rabid Pit Bull. Indeed, Matthias told us that German anglers understood Steinbeissers to possess twice the poundage pressure in their jaw muscles as that of the very same canine… real eye-watering information if true.

The initial bite from wolf fish belies their appearance, as I discovered soon afterwards when I hooked and landed a couple of average five-pounders amongst non-stop cod burglary. But recognising the bite and actually connecting with the fish are two different things, as I found out to my cost. I was getting lots of Steinbeisser attention, but dropping fish all over the place. I’d get the bites, jag the hook home and get half a dozen turns on the reel, only for fish to repeatedly shed the hook. I would describe the chain of events as akin to fishing for bull huss. Huss have a habit of gripping the bait without the hook penetrating, and simply opening their mouths and letting go as they are wound in. 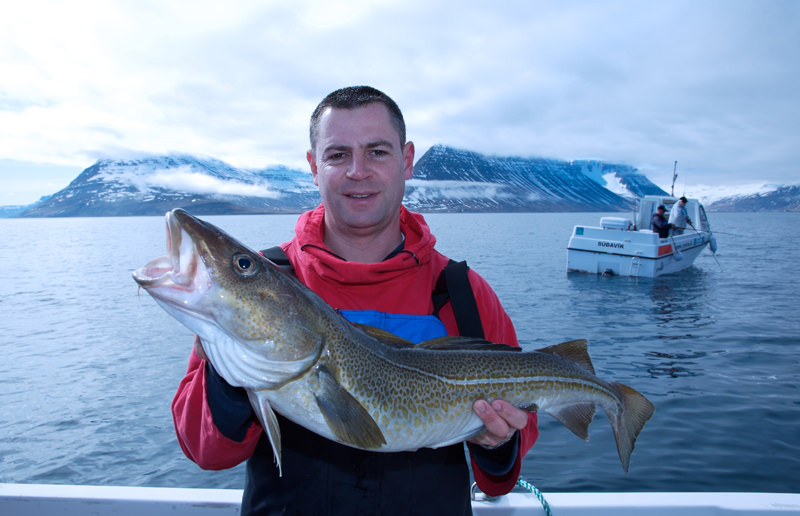 My wolf fish cack-handedness was really hacking me off, provoking quiet Matthias to get his rod out and show me how it was done properly. What he did left both Tony and I open-mouthed and goggle-eyed. Matthias was fishing heavy braid straight through without a leader, and had been on the bottom for only a couple of minutes when he nodded towards his slowly bumping rod tip and said “Steinbeisser”. He dropped his rod, wound down on the reel and whacked his rod skyward so violently that I thought his braid might explode as a result. It held however, and did again on the three identically aggressive strikes that followed. The result was a double-figure wolf fish, which was followed by another, and then another. We got the point and so did the fish on the receiving end of Matthias’s power tactics. What became clear is that these wolf fish have mouths like solid brick and getting the hook to penetrate is no easy task. Striking with braid is something that I always try and avoid, but to apply home tactics in this instance was a big mistake. Clearly Matthias uses heavy 80lb braid because applying such heavy-handedness to lighter lines would indeed see them bursting left right and centre. 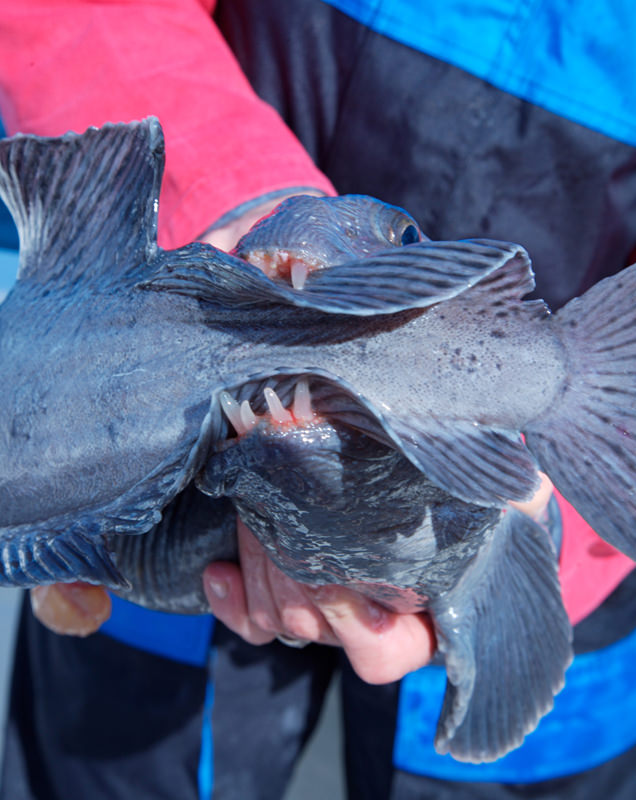 My radar eyes were quickly drawn to Matthias’s rig, which, though essentially similar to those I had in my bag, had noticeable differences based explicitly on a common theme… noise. The red coloured weight was an odd looking thing: I would describe as a sort of pirk/weigh hybrid with an in-built rattle chamber. The method was to tap the bottom by deliberately lifting and lowering the rod a few inches at a time… and it worked. These special rattling lures were developed especially for wolf fishing by a friend of Matthias. They are called ‘Balzer Seawaver Seewolf Rattlers’ and are available in the UK through Askari. A spinning rattle similar to a double ‘Booby Bead’ was also attached to Matthias’s rig just above the bottom bait. Now I will hold my hands up and say that I have always regarded Booby Beads as horrible, garish items of fishing tackle, more likely to have fish running for cover than actually signalling them to baits. But, this was one of those ‘when in Rome times’, where there could be no disputing their non-scariness… so apologies to Mr Booby! Next time I am Iceland bound I will definitely be hiding several packets in my tackle bag. With no end of cod and a few wolf fish between us, I came ashore that evening having learned several valuable lessons that would be tested the next day.

My, what big teeth you have!

I’d changed the hooks on my rigs as I wasn’t happy with my wolf fish hook-up ratio, and because inspection revealed that those I was using became uselessly blunt after any wolf encounter. The brutal teeth and crushing jaws are designed to crunch down on mussels and sea urchins – their main natural food items – and hooks need to be man enough to contend with the same vicious treatment. 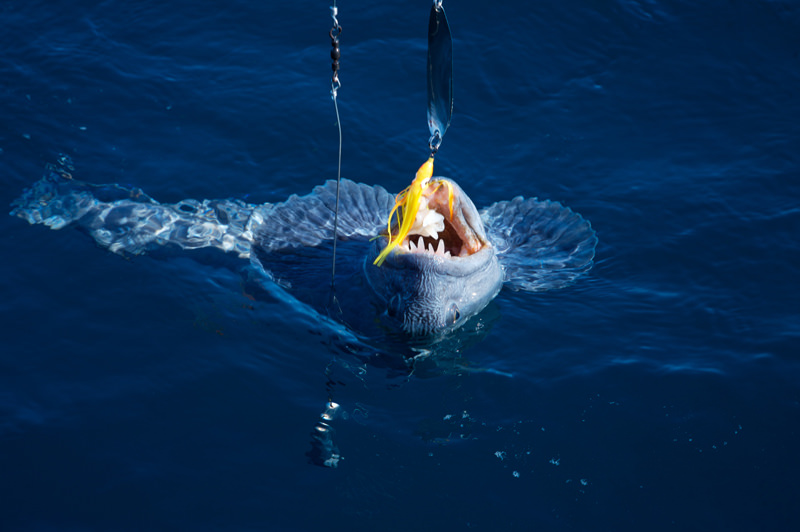 The second day’s fishing started just the same as the first, with cod jumping all over pirks, rubber lures and baits. But action in the wolf fish department when it came a couple of hours before high water was red hot. Our biggest wolf up to this point was around 11lb – a good fish by anyone’s standards, but we wanted bigger… and we got them in numbers. Matthias’s advice to sink the hook with a good wallop proved absolutely spot on as both Tony and I hooked, landed and returned loads of cracking wolfish and several easily into double figures.

Matthias would quietly nod his approval as we now instantly recognised the Steinbeisser bites and typically answered them with a left-hook, right-cross and jaw-rattling jab or two for good measure! As we filled our boots with thrashing, snarling wolf fish, the lads on the other boat fishing alongside did likewise. Steve Mason wrestled out a cracker of 16lb, while Dave Proudfoot seemed to have a fang-face head-banging at the side of the boat every time I looked over. We all enjoyed fabulous wolf fishing and if you have never done it, I recommend that you do, at least once. I caught many more and bigger wolf fish over those two days than I have seen over decades of fishing in places where they regularly turn up.

A typical week-long self-drive boat angling package, including flights and accommodation, prices at around £750 per person based on a group of four people. For more details of the boat and shore fishing holidays offered by Icelandic Fishing Adventures contact Steve Mason or send an Email 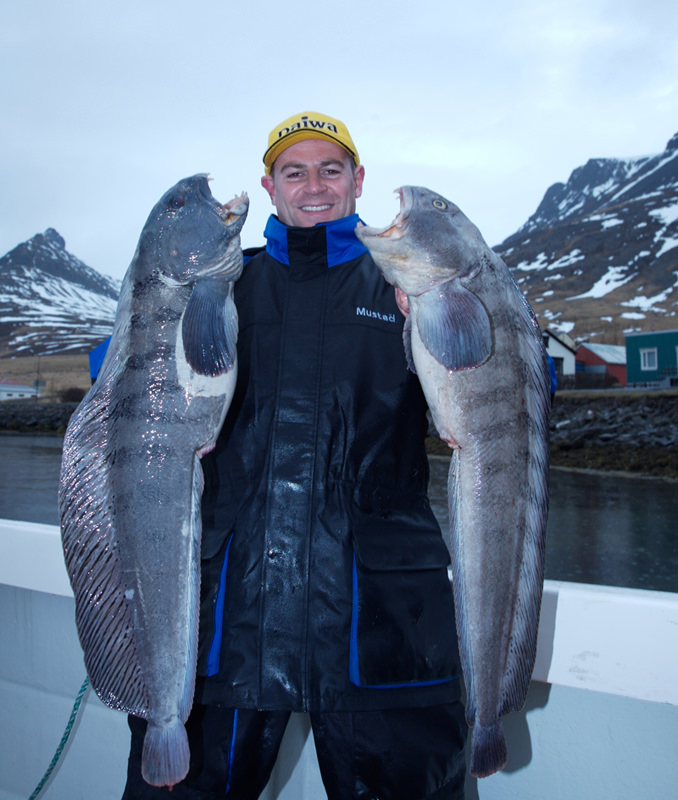 Getting to Iceland is painless and takes a little over an hour from Glasgow. Icelandair flies to Keflavik/Reykjavik from London Heathrow, Glasgow and Manchester, as well as various airports in Ireland.