Reports of the diverse and spectacular fishing from Guinea-Bissau’s island archipelago are legendary. Mark Nightingale first looked at options back in 2008 but deferred the trip due to the difficult journey and suitable accommodation for the family.

In discussing options with Richard Sheard of World Sport Fishing during 2012 it was clear the situation had changed. There was now a flight into Bissau airport and a highly recommended eco hotel on the principal island of Orango (Orango Parque) with boats moored directly outside on the spectacular foreshore close to many of the fishing hotspots. There were continued reports of some excellent catches and no other significant concerns. My wife and I did not need any further persuasion! 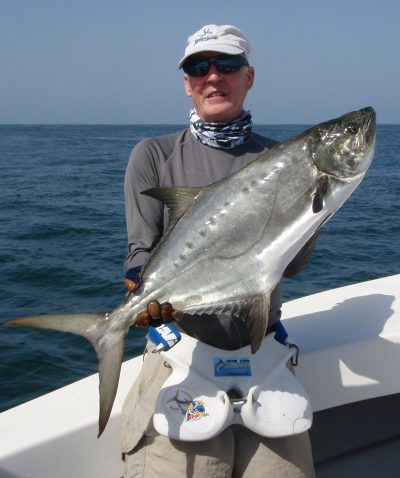 Our evening flight from Heathrow with a change at Casablanca was with Royal Air Maroc (TUP having pulled out from this route) was trouble free. There was no charge for the rod tube at Heathrow but we were charged 150 Euros on the return flight. We were met at the airport by Max, World Sport Fishing’s agent, as arranged and with visas paid then met Pepe our English speaking and very personable guide for the holiday. After a short journey by taxi to the Mar Azul hotel where we slept and took breakfast in the morning before the crossing to Orango Island with Pepe and our skipper for the holiday, Zé.

This took under 3 hours in the calm conditions. Richard’s detailed checklist for the trip, including tackle for those taking their own, although tackle packs are also available, was vital with suitable shoes required to avoid cuts on the occasion sharp shell while wading to the boat. We took a full range of popping, jigging rods, reels and lures plus some heavy gear for the tarpon and shark fishing. Our rods were from the US Company Terminator Tackle and proved ideal for live-baiting as well. Our preference for spinning/popping reels were heavy duty Shimano reels loaded with 100lb and 65lb PowerPro braid and Shimano Talica 20 and 12s lever drag reels similarly filled for jigging, trolling and live-baiting.

In the event all rods and reels got used pretty much interchangeably except for popping. Jigs need assist hooks to wire with barracuda in abundance, likewise a wire leader for deep diving lures. 150 mm Storm Deep Thunder 15 in a range of colours, the brighter of which proved highly effective in the turbid waters plus Yozuri Surface Bulls and a range of Tsunami poppers from 10 to 200 mm and various stickbaits. Richard’s recommended Diawa Accudepth braid could have been useful as at times the crew gave specific depths for baitfish however we seemed to cope fine without it. 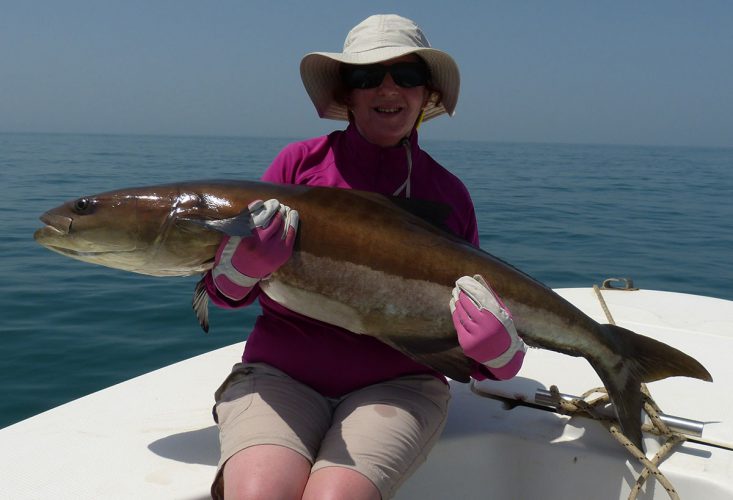 We arrived at Orango in time for lunch and a full discussion with Pepe and Zé to finalise plans for our seven days of boat fishing. I had made tentative arrangements with Richard based on tides but advice was to confirm with Zé who has fished this archipelago for most of his life. We thought about beach fishing if we had chance as that can also be very productive. Contrary to rumour, dining was not on fish for the entire holiday. We enjoyed beef, chicken and goat as well as the various fish, snapper, jacks, cobia etc, that were all cooked to perfection and delicious. Hotel rooms were comfortable, clean and equipped with an en suite bathroom, mosquito nets and cold fresh water from boreholes rather than the brackish water on some of the other island camps. Although not seeing a single mosquito the gnats were equally irritating so insect repellent proved essential. 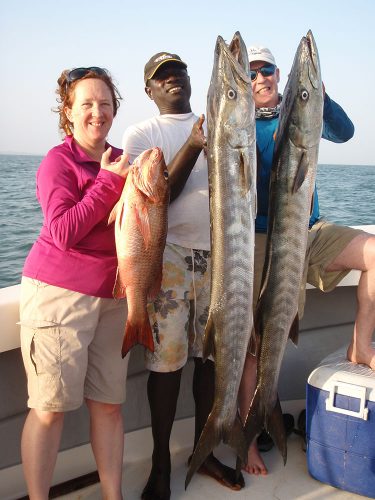 We heeded advice to take anti-malarials as this is prevalent and a year-round risk. We had no problems whatsoever with stomach upsets or other nasties during the two weeks but a small first aid kit is nevertheless highly recommended.

Discussion of all the options carried on during that evening lubricated from the well stocked bar with excellent Portuguese wines and beers. We decided on a trip to the renowned Chiminies (chimneys) wreck the following day, named after two of the aforementioned structures that jut 30 or so feet above sea level. Numerous predatory seabirds perched in anticipation providing a clue to the coming sport. The tides were perfect and the once again smooth trip took less than two hours including feathering for bait with sabikis which soon filled the live-bait well, including plenty of the preferred yabuoys. Zé never failed to find these in abundance during the holiday.

On arriving at the Chiminies we first cast a few poppers towards the wreck but before we had chance to get into the swing Zé and Seidu pointed excitedly below the boat. A small shoal of huge cobia could be seen immediately below the hull. My hands shook as I lowered a yabuoy over the gunwale. To my amazement it was taken immediately followed by a 300 metre straight run from the sizzling Shimano Talica 12, had I fished too light was my immediate concern. While this was happening Zé had dropped a jelly shad over the side and handed the rod to my wife and that was also immediately seized followed by a similar run, fortunately in the opposite direction. After 15 minutes discordant grunting and groaning and to the amusement of Zé and Pepe the occasional squeal from my wife when she had to be grabbed to prevent her going overboard, the leaders were eventually grabbed for both fish. Then disaster as the hook straightened on my wife’s fish and after several attempts at gaffing mine broke free. My fish estimated at 120 and my wife’s at 100lb were specimens of a lifetime and no photographs.

I slumped despondent mumbling expletives to myself. I could see that the crew were equally disappointed, but that’s fishing. Pepe advised us not to worry as there would be plenty more. Well, unsurprisingly the cobia disappeared for the day but what followed was several hours of rod bending action on the deep diving lures and live-baits with 15 jacks, snapper and barracuda to 30lb plus a superb 27lb leerfish. We did not see any fish busting on the surface during the day and blind casting poppers was to no avail. However with the other methods proving so productive we were not complaining. As if this was not enough we drifted the Uno channel next to the hotel with vertical jigs and live-baits on the way back and caught plenty more jacks and larger barracuda to 35lb. The initial run of these fish is virtually unstoppable even on Stella 2000s and as we did not loose any in the rocks we did not try to prevent the storming runs.

The second trip was to the ‘pompano hole’ and much to my amazement this mark immediately produced another cobia for my wife. This time a more manageable 45 pounder that was landed and duly photographed. We also had pompano, cassava, spanish mackerel and bream to 6lb on bottom fished live-baits. Then onto the 17Km wreck which was unproductive on this day. We finished with a couple of hours jigging back at the Uno Channel which resulted in a small cobia, jacks and snapper to 22 lb plus a 120 lb nurse shark. 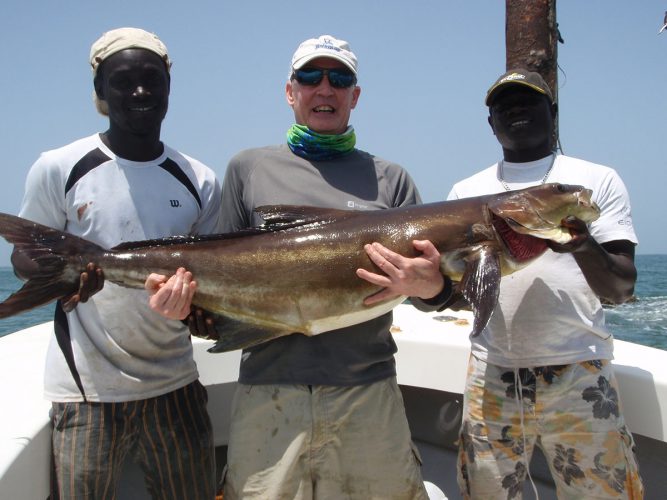 Desperate for a larger cobia Zé once gain headed for the Chiminies on the 3rd day while my wife had a much needed rest day. Well this time we did the business and three cobia of 112, 95 and 70lb were boated and photographed by lunchtime. The Chiminies were not the only wreck seen that day! I did not want to overfish this mark so after a few jacks, leerfish and barracuda to 20lb on live-bait I suggested that we head for a relaxing inshore mark. Fat chance as we once again fished the Uno channel. Jigs and live-bait produced jacks to 17 lb, small white-tip sharks and a superb 48lb barracuda. The jig had only just hit the water when this specimen took off and I had foolishly left off my gloves when thumbing the spool to prevent an over-run resulting in a badly burned thumb, lesson learned.

By this time the species count had clocked up to 17 different fish and I treated myself to a well deserved day off. The plan was to be have two days tarpon fishing but by now the wind had picked up. We reached the mark after three hours battling choppy seas it was obvious to all that with the requirement to frequent reposition the anchor, a nasty beam on sea and gradually increasing wind that this was no place to be with darkness approaching, peak time for tarpon here apparently. We reluctantly headed back to leave these 150lb plus leviathans for another day. 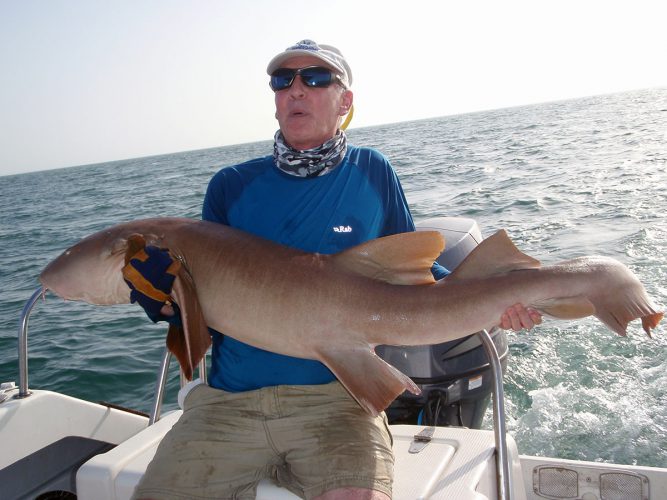 The next day proved equally windy so as the tides were right we fished for sharks from the Uno channel. Firstly we successfully jigged for 15lb jacks as bait. One snaffled my wife’s jig and was immediately followed by a searing 500 yard run and then ping as the line broke. The retrieved line was heavily abraded half way up the leader, the sharks had arrived early! We float fished jacks at various depths but failed to connect with another shark that day. We did however amuse ourselves throughout by catching 15 mixed species jacks to 20 lb. 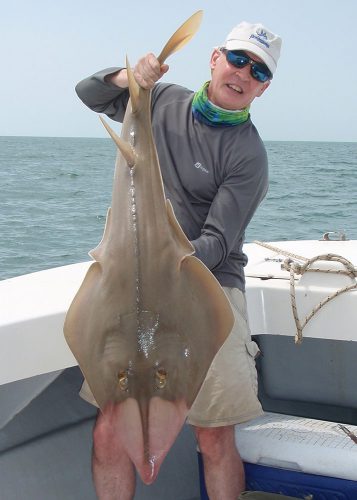 On day six we tried something different, popping along rocky marks off Uno and the Pikinina sandbar which produced some follows and one solid hook-up which was lost in the rocks. We then bottom fished the channel at Pikinina catching a 25 lb guitarfish, a 15 lb Pompano that ran off like an express train, and barracuda, jacks, snapper and sweet-lips to 15 lb.

We joined another angler on day seven and fished the Chiminies again. A fine 100 lb plus Cobia to Ian on live-bait plus, queenfish, barracuda, remora and grouper to 18lb. I finally caught a fish on a popper, more a reflection of my inexperience than anything else, a fine tiger-jack of 15 lb that I clearly saw follow the lure and take just before the boat, very exciting indeed.

Our catch statistics for the seven day’s fishing totalled 121 fish of 23 species including 7 cobia (three over 100 lb), 15 barracuda to 48 lb, 44 jacks (yellow-fin, long fin, tiger and big-eye) to 30 lb, 17 snapper to 18 lb (cuberra, red, ruby and black), 3 leerfish to 27 lb, 3 sharks to over 120 lb, 7 pompano to 15 lb, 1 guitarfish 25 lb and various queen-fish, a local name for fish that are very similar to and fight like permit, bream, cassava, spanish mackerel and grouper under 10 lb. The fishing on our holiday was interspersed with a trip to the local village guided by Pepe and some nice long walks to see the incredible birdlife, thanks to Ian for identifying them. A colony of nesting weaver birds right next to the hotel unperturbed by passers by provided some excellent photographic opportunities. We missed seeing the marine hippos as they retreat deeper within the river at this time of year.

All in all, this was an excellent holiday and outstanding fishing by any standards. If you are considering Guinea-Bissau it’s well worth discussing your target species and options, including tides with Richard who pioneered much of the angling around the area, and then spending some serious time in the gym! I’d certainly fish Guinea-Bissau again one day. Thanks as ever to Richard, Chantal and Kelly at World Sport Fishing for another amazing sport fishing holiday where all of the arrangements ran like clockwork.

Fishing Fun in the Mexican Sun