Gethyn Does It His Way On My Way 2

During the early hours of the morning of the 2nd of March 2018 storm Emma did its worst as it followed a catastrophic course through the marina at Holyhead on Anglesey. More than 80 boats were sunk or foundered on the rocks surrounding the harbour pontoons. Among the charter vessels destroyed by the storm and accompanying wave surge was My Way, the much loved workplace of popular skipper Gethyn Owen.

Despite the best efforts of Gethyn and the salvage crew My Way was deemed a total constructive loss after its recovery from the muddy, marina depths. 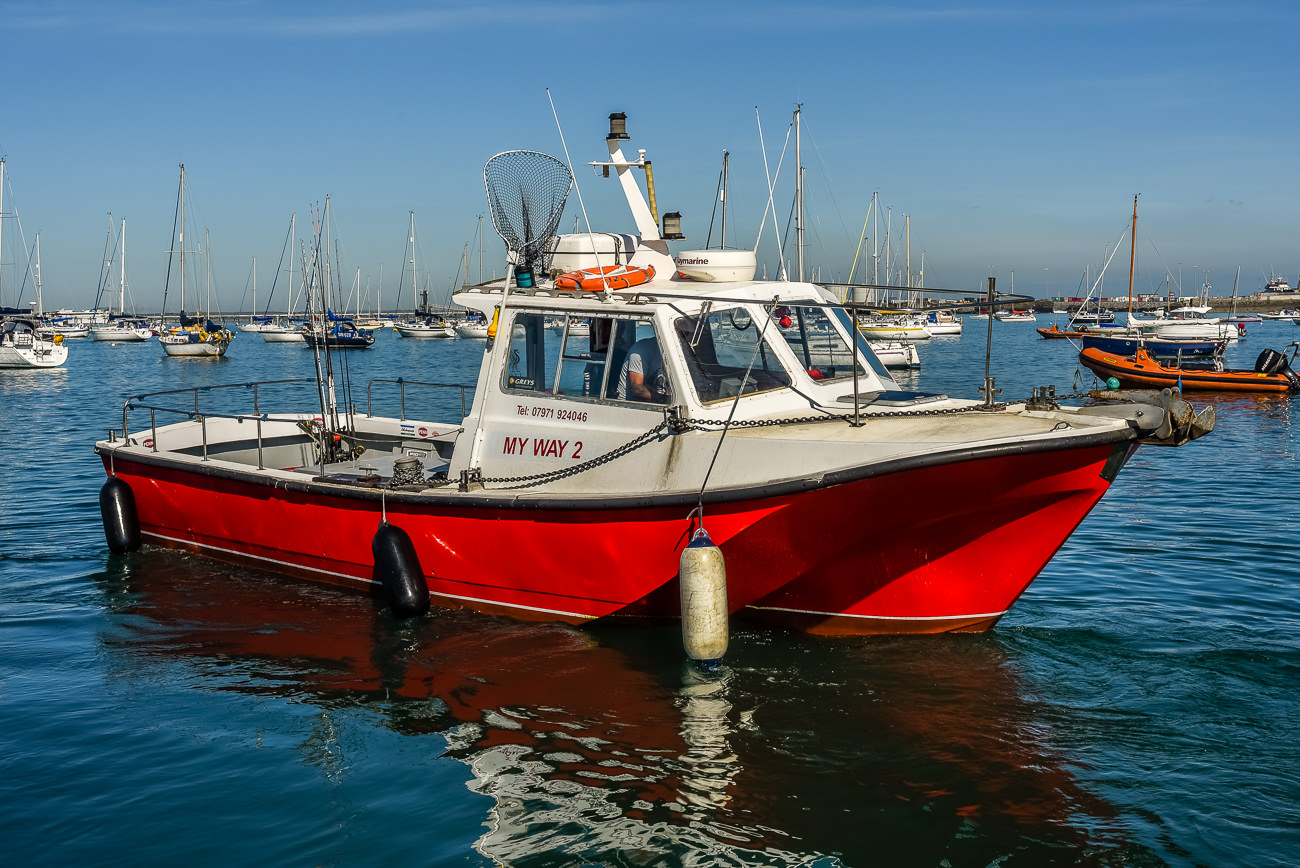 My Way 2 coming alongside

Gethyn’s enthusiastic drive to get back to sea saw him head to Gosport where he struck a considered but quick deal for a new, suitable vessel, barely two weeks after nature had devastated his pride and joy.

The replacement vessel is an Offshore 105 powered by an Iveco 420 engine. The new boat was rapidly surveyed and re-coded before it’s journey north to Anglesey. A month after Emma struck, the now renamed My Way 2 put to sea with some of Gethyn’s friends and family aboard for a few hours fishing. The first week of April saw Gethyn and My Way 2 on a mooring within the bounds of Holyhead Sailing Club and ready for the first charter trip of the new season.

With the support of wife Trish and son Harry, as well as friends (real and virtual), anglers and colleagues, Gethyn and his vessel are up for the challenge of re-establishing his business. 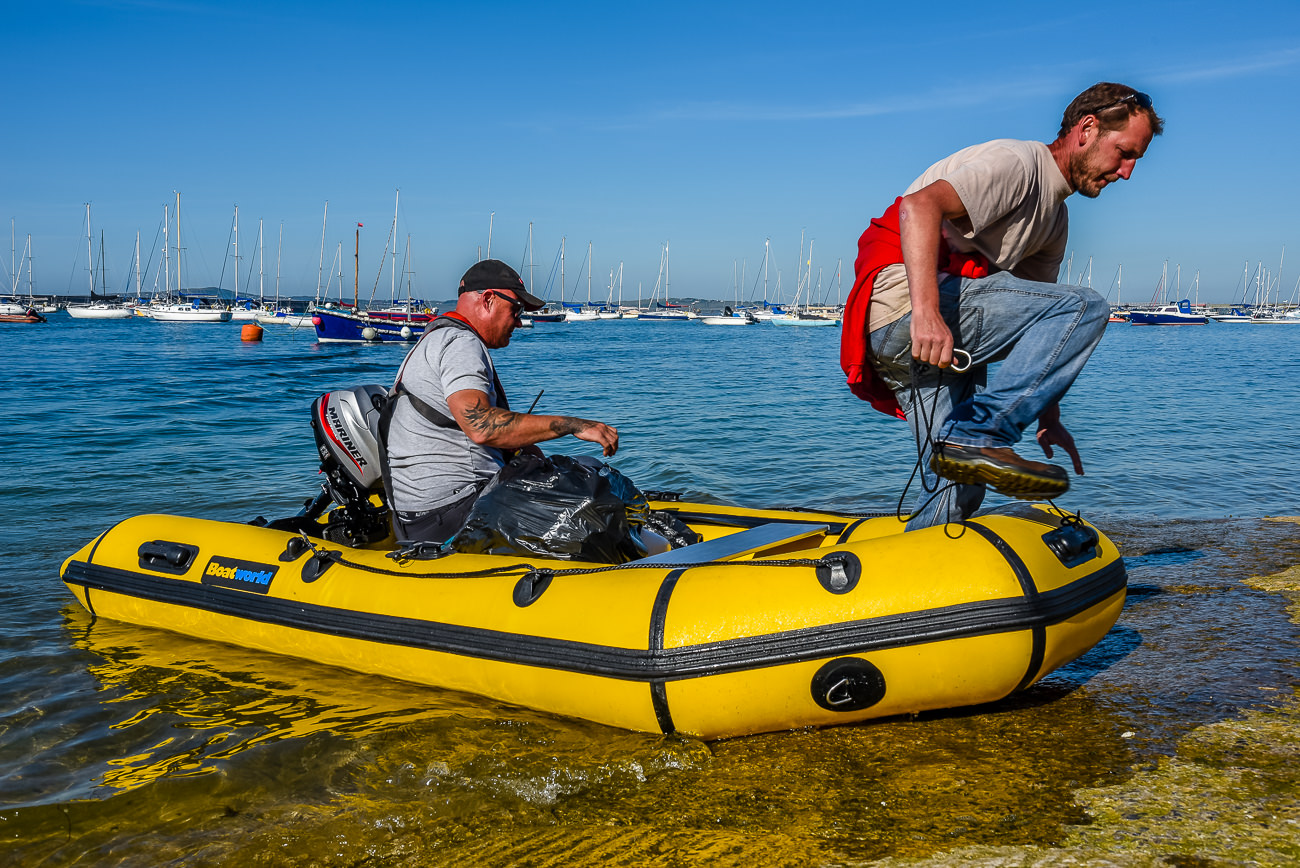 Crewman Mark disembarks from the tender

Anglers on board My Way 2 won’t notice but everything is not perfect. Tasks that were formerly carried out from service points on the pontoons, such as refueling and replenishing fresh water supplies, now require manual handling to humph the various containers from the shore to the boat. This coupled with the fact that recovering the boat from its mooring now requires the use of a rubber dinghy means that Gethyn’s already long working day is now more than an hour longer than it used to be prior to the storm.

The anglers continue to be picked up and dropped off during the Summer at the small remaining finger of pontoon still attached to land within Holyhead marina. During the winter months, from November to March, My Way 2 will operate out of the sheltered marina at Port Dinorwic allowing the option of fishing out from either end of the Menai Straits.

As a result of the sinking the majority of fishing gear available for hire onboard the old boat was lost or severely damaged. Fortunately, Gethyn has a great working relationship with his sponsors, Pure Fishing, and My Way 2 has been fully equipped with a range of rods and reels suitable for all the styles of fishing that the visiting angler is liable to encounter. Everything from sharks to mini species are fully covered. 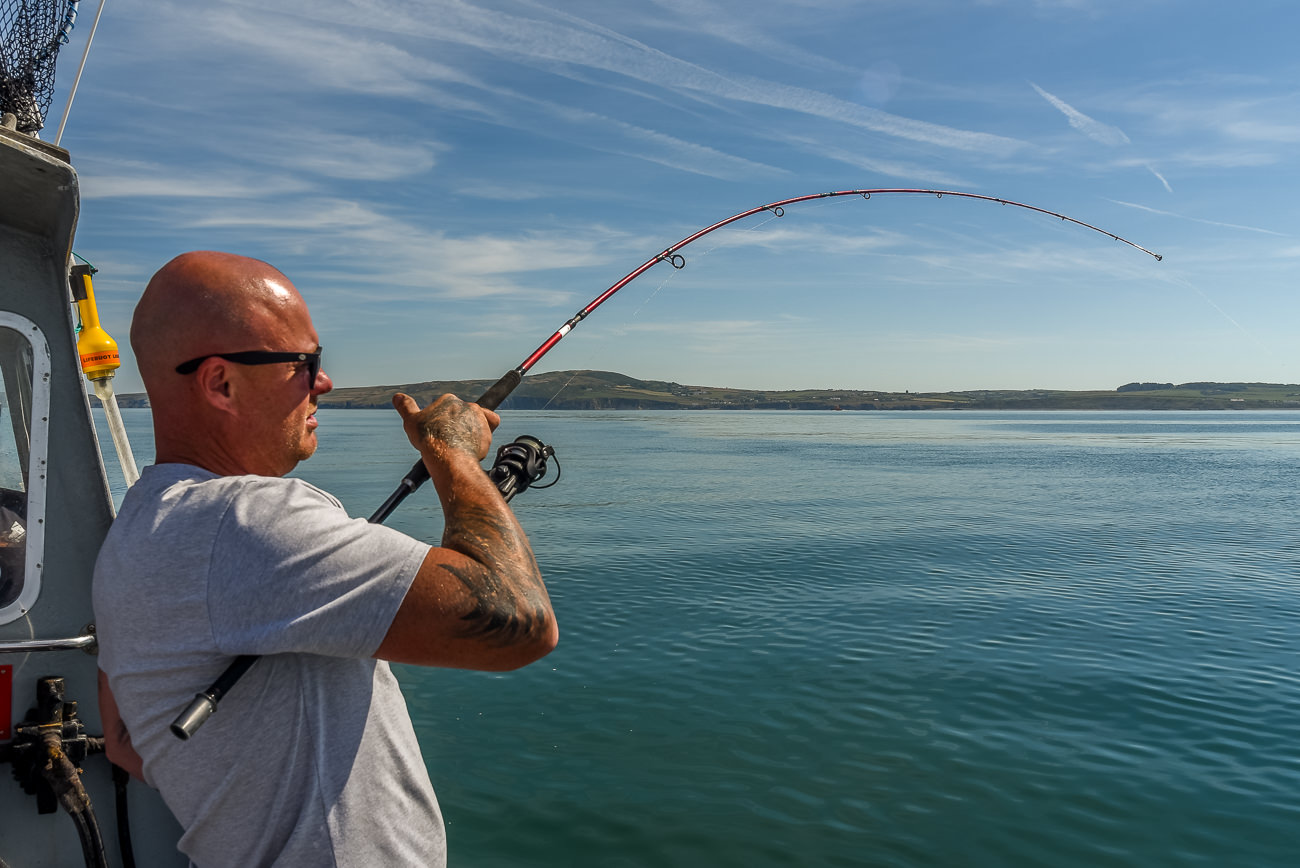 It will take longer for Gethyn to restock the full range of excellent rigs that are normally available for sale both at sea and in the shop section of his informative website.

With the old boat Gethyn built up a loyal following of regular anglers who enjoy targeting the spring / summer run of the streamlined smoothhounds that frequent the main bay. This is normally coupled with sessions on the mussel beds or fishing for wrasse and pollack. Depending upon the tides and weather the Holyhead Deeps are a popular choice for huss, tope and large spurdogs.

I spend at least a couple of days each year with Gethyn and his crew and the quality fishing accompanying the general entertaining experience are worth my round trip of over 1000 miles. This year I was a bit later than normal but was hopeful of managing to catch the smoothhounds while they were still in the area. 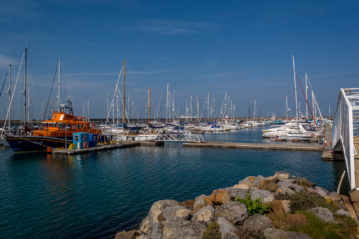 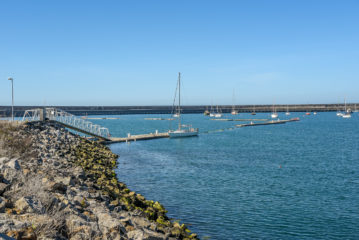 Unlike my normal trips away from home, the forecast bode well with clear skies and calm seas predicted for my first outing on My Way 2. Along with the rest of the day’s crew I met up with Gethyn at 08:30, the start times vary with the program for each day. Following a quick chat and survey of the new boat we cast off and threaded a course through the marina moorings. Passing the end of the breakwater we headed north towards the Bolivar buoy. The buoy marks the peak of a ridge of rough ground and we would be fishing at anchor in 15 to 20 metres of water to the west of the rocks.

Our target species would be the starry smoothhound, research shows that these are the only member of the hound family liable to be found around the UK coast. Along with the hounds we could expect bull huss, small rays and of course the match angler’s favourite lesser spotted dogfish.

Rigs for the smoothhound consist of a simple single hook running leger with a 30 – 50lb breaking strain snood to a medium wire hook of 3/0 to 5/0 in size with a wide gape. The snoods should be 50 to 100 cm long. Depending upon the tide weights need to be no more than 200 grams with some anglers preferring grip leads when casting up or across the tide. 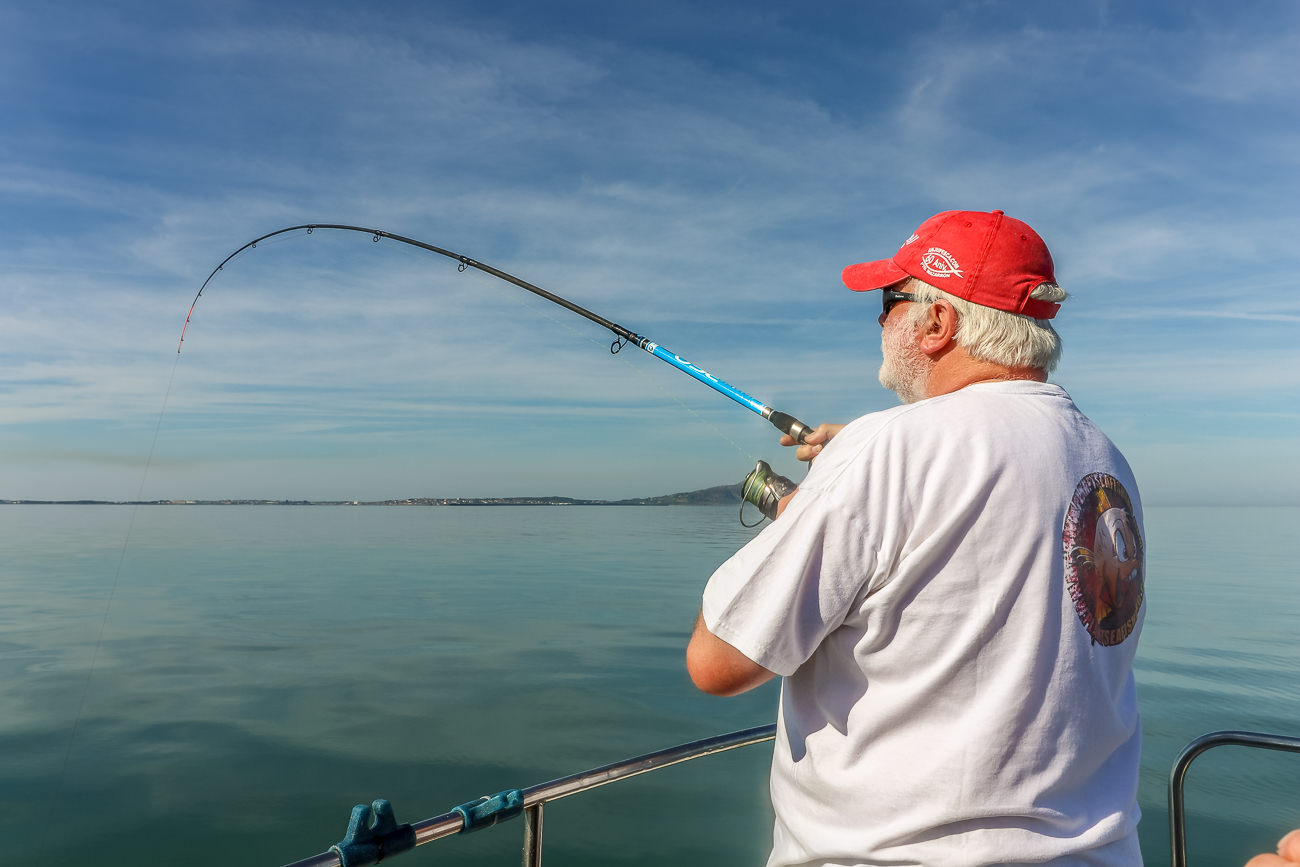 Rods and reels are a matter of personal choice but they should be of the lighter design. I enjoy using my 3.6 metre Blue Zone Telepower rod matched with a Diawa bait-runner fixed spool reel.

Gethyn has plenty of excellent Pure Fishing rods and reels aboard that are suitable for the smoothies including the superb Penn Rampage Bass Spin rods which provides great sport with the mini-sharks.

There is only one bait for the Holyhead smoothhounds and that is peeler crab. While you can bring your own bait the simplest way is to order the crab from Gethyn when you make your boat booking.

The natural thought when using crab is to peel the hard shell off the moulting crustacean before mounting it on the hook. When explaining about the bait the first thing the skipper will tell is not to peel the crab but to use it intact. The scent will still find its way to the hounds but the hard shell baits are less attractive to the ubiquitous dogfish. Although squid, hermits and prawn will take smoothhounds the roving packs of doggies are more liable to home in on these softer baits. 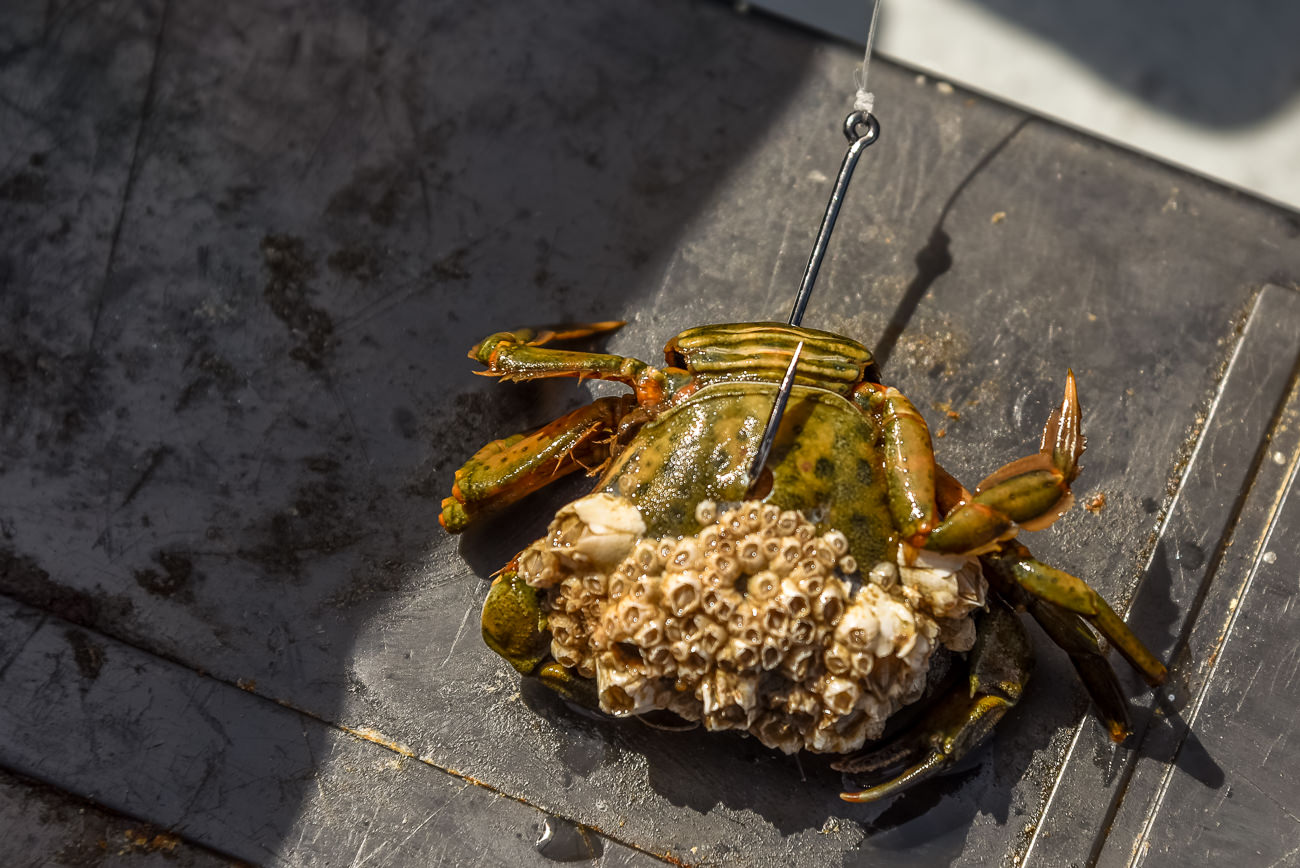 A peeler crab ready for the smoothhounds

Baiting up is a simple process, the hook is passed through the underside of the crab and pushed out through the back to expose the point. A few wraps of bait elastic around the carapace and hook shank are all that is required to hold the crab in place.

It wasn’t long before the first hound showed their speed by beating the dogfish to the bait under clear blue skies and water with barely a ripple. The Penn hire rod took on a smooth curve showing the power of even the smaller hounds as Vic Davis landed the first smoothhound of the day. 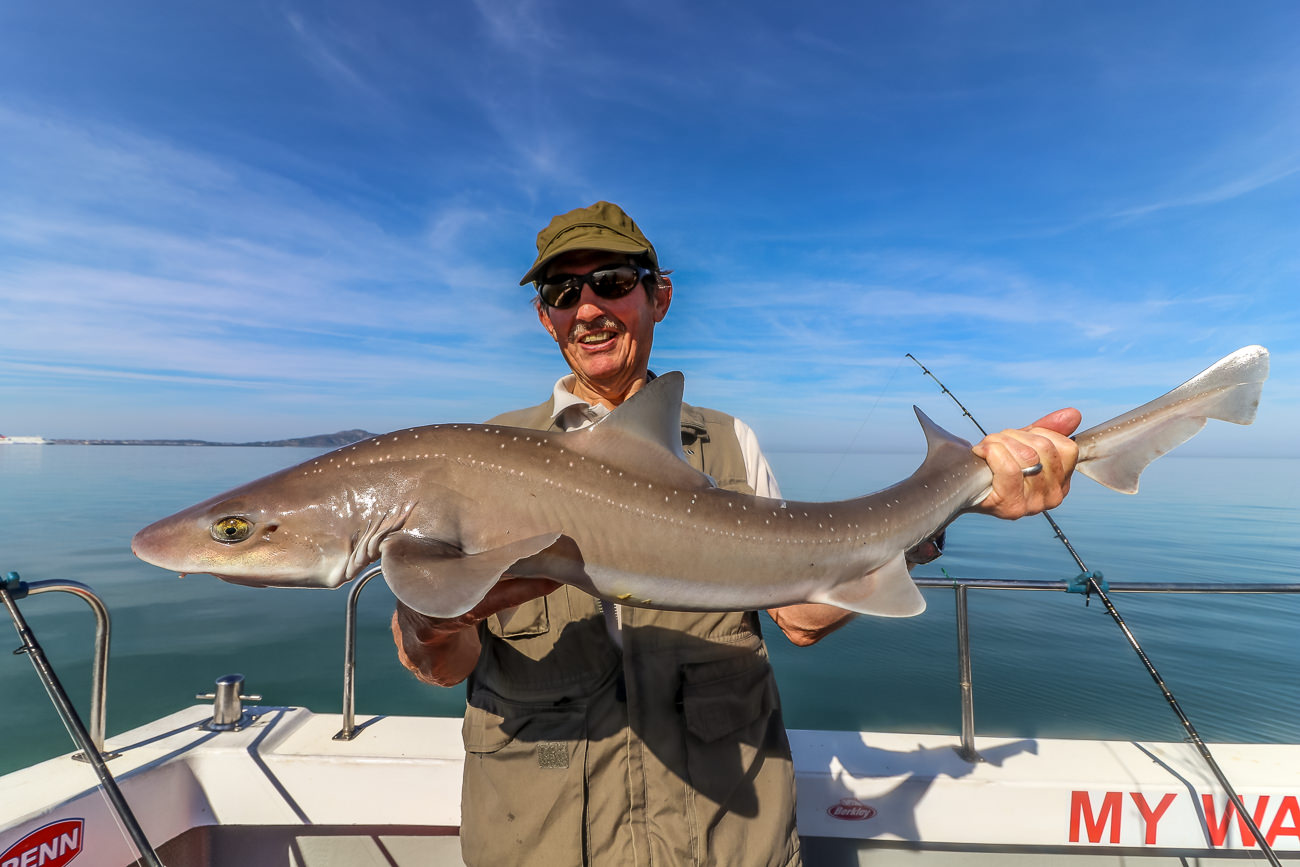 Vic Davis with the first smoothie of the day

The morning progressed with a steady stream of hounds, the best just touching double figures. The occasional bull huss also crunched down on the crab baits that avoided the lesser spotted dogfish.

Mutton pies, smuggled from the Scottish free trade zone, and several cups of coffee helped feed the inner man as the skipper and crew ensured that the craic was maintained during the quieter spells. Gethyn is always ready with a quip to sustain the banter, and is often the subject of mild abuse. His musical taste does sometimes stray beyond the boundaries of the “middle of the road” genre. 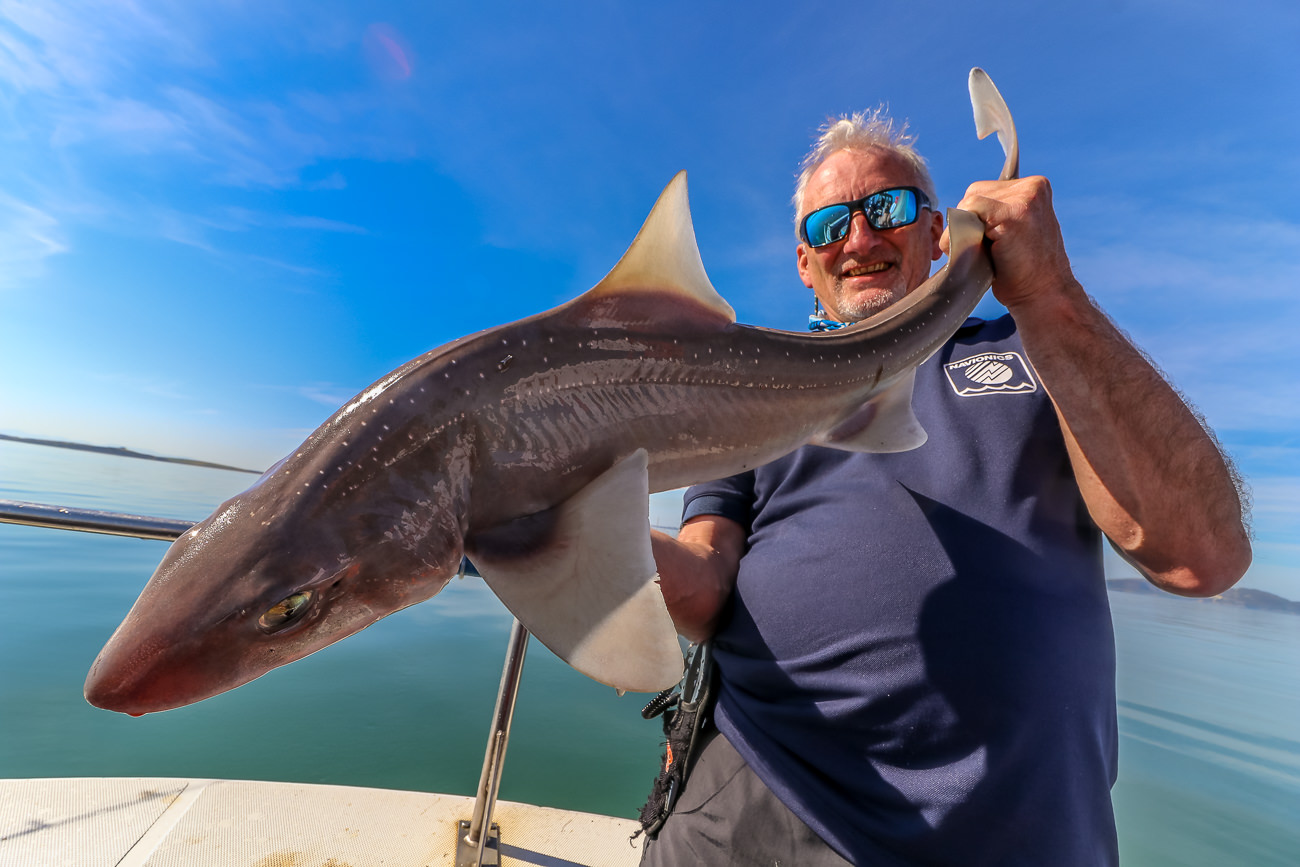 Tim Macpherson editor of Saltwater Boat Angling with a smoothie

It was a slight disappointment that none of big hounds showed up, Gethyn netted a near Welsh record 25lb plus fish a few days earlier, but everyone had fish and it was great to bask in the sunshine.

In common with a lot of areas the mackerel have been patchy so far this year and today proved no exception.

A hunt about under the majestic cliffs and ledges of South Stack produced a couple of mackerel and one herring for the boat’s efforts. 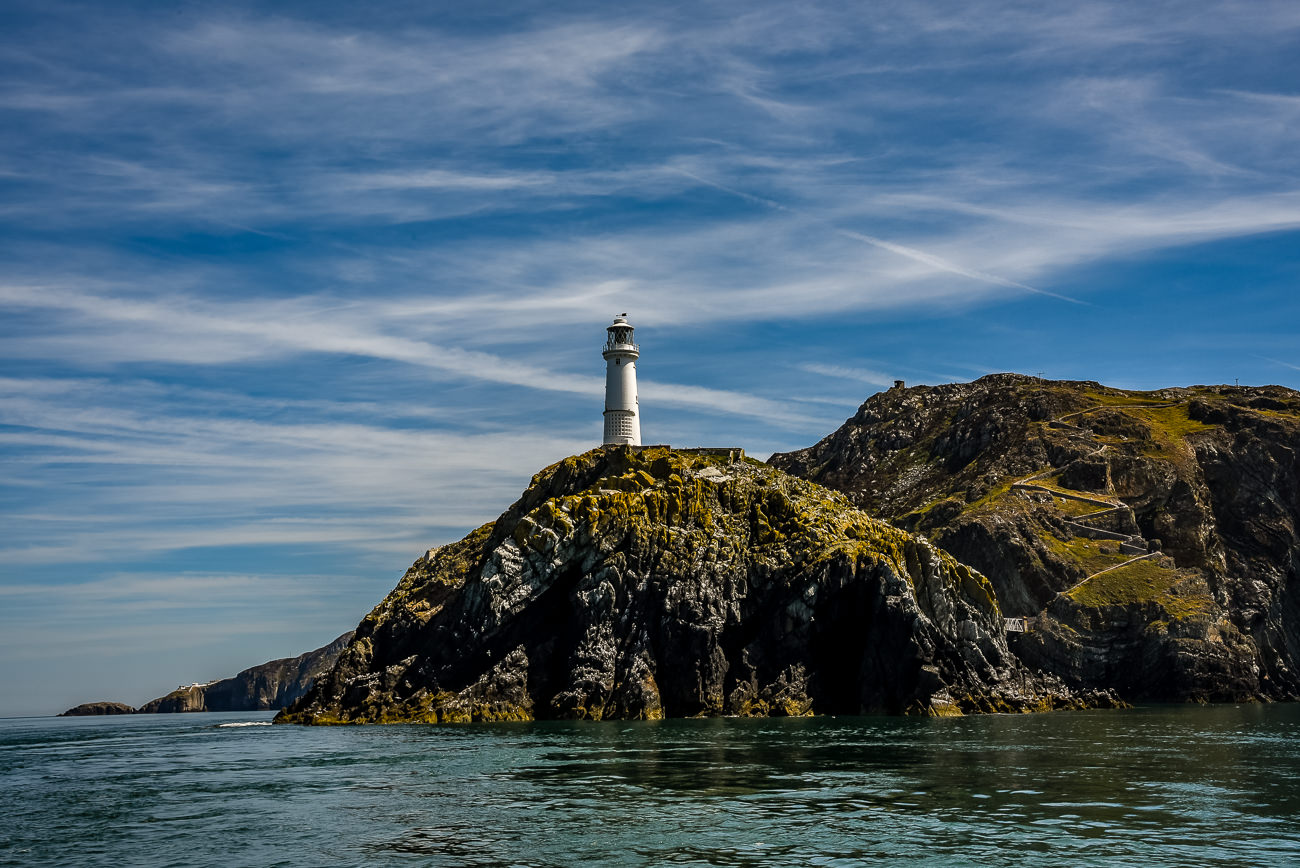 As the skipper had plenty frozen mackerel, sandeels, squid and the residual peeler crab chilling in poly-boxes he decided to head south and see if the rays were in a feeding mood.

With the additional speed that the Iveco gives My Way 2 over the previous incarnation Gethyn is able to venture further afield and he is starting to put together a library of marks with a variety of species to offer his customers new and exciting fishing. Today we sailed to the outside limits of Cymyran Bay to drop the hook for the afternoon session, with sausage butties to sustain us as the boat settled at anchor.

Tackle again was a simple running leger and with the tide conditions and the depth we were  fishing in leads could be kept around 150 grams.

With the sun beating down mackerel or squid and sandeel cocktail baits hit the sandy seabed and it wasn’t long before the first of the rods started bouncing. Honestly, the bottom of the sea around north west Wales must be carpeted with dogfish! 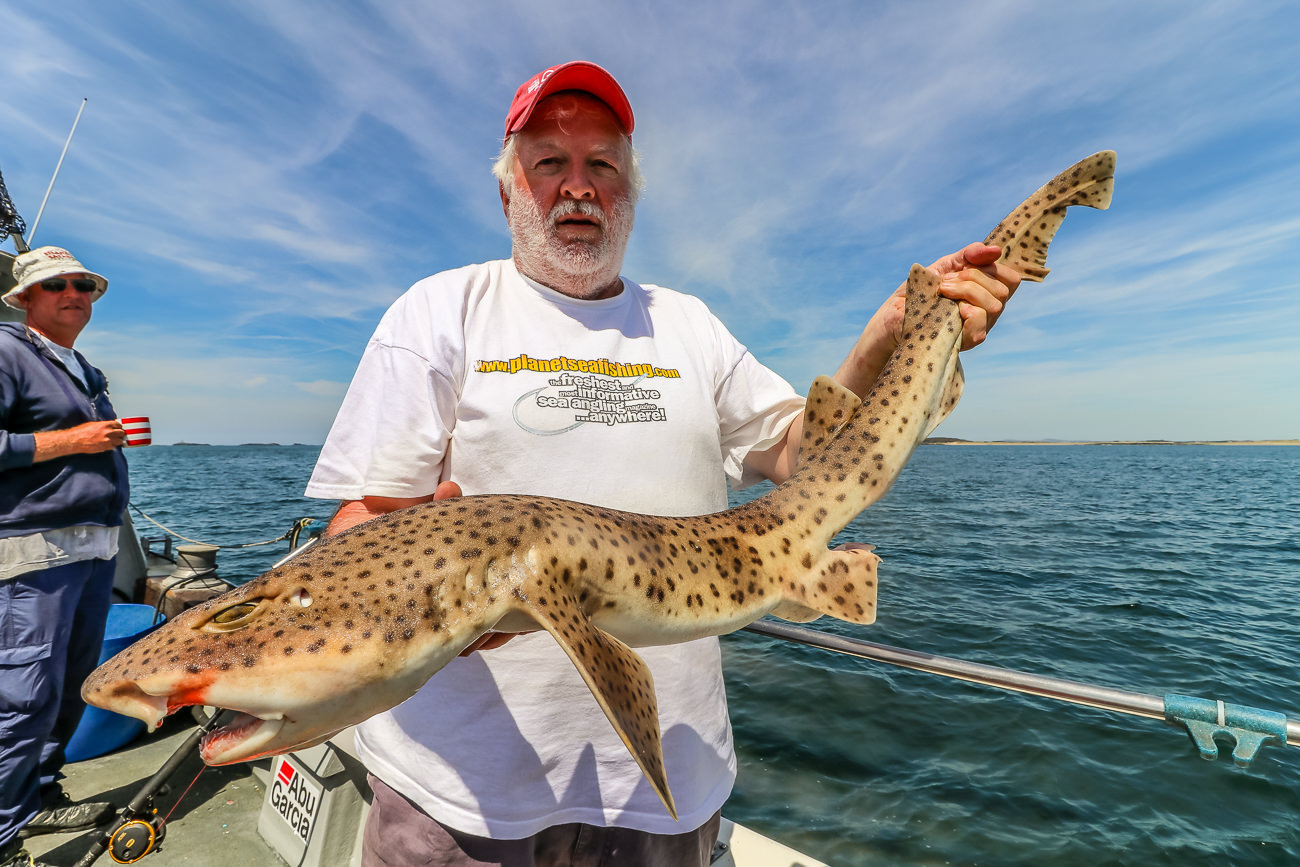 The author with a feisty huss

Fortunately, the larger cousins of the doggie were about in good numbers and good quality bull huss provided great sport on the light tackle. The huss have monstrous mouths which will happily chomp down on half a mackerel.

Despite using the large baits some lesser spotted dogfish were brought to the boat, without the hook being embedded and simply choking on the mackerel. 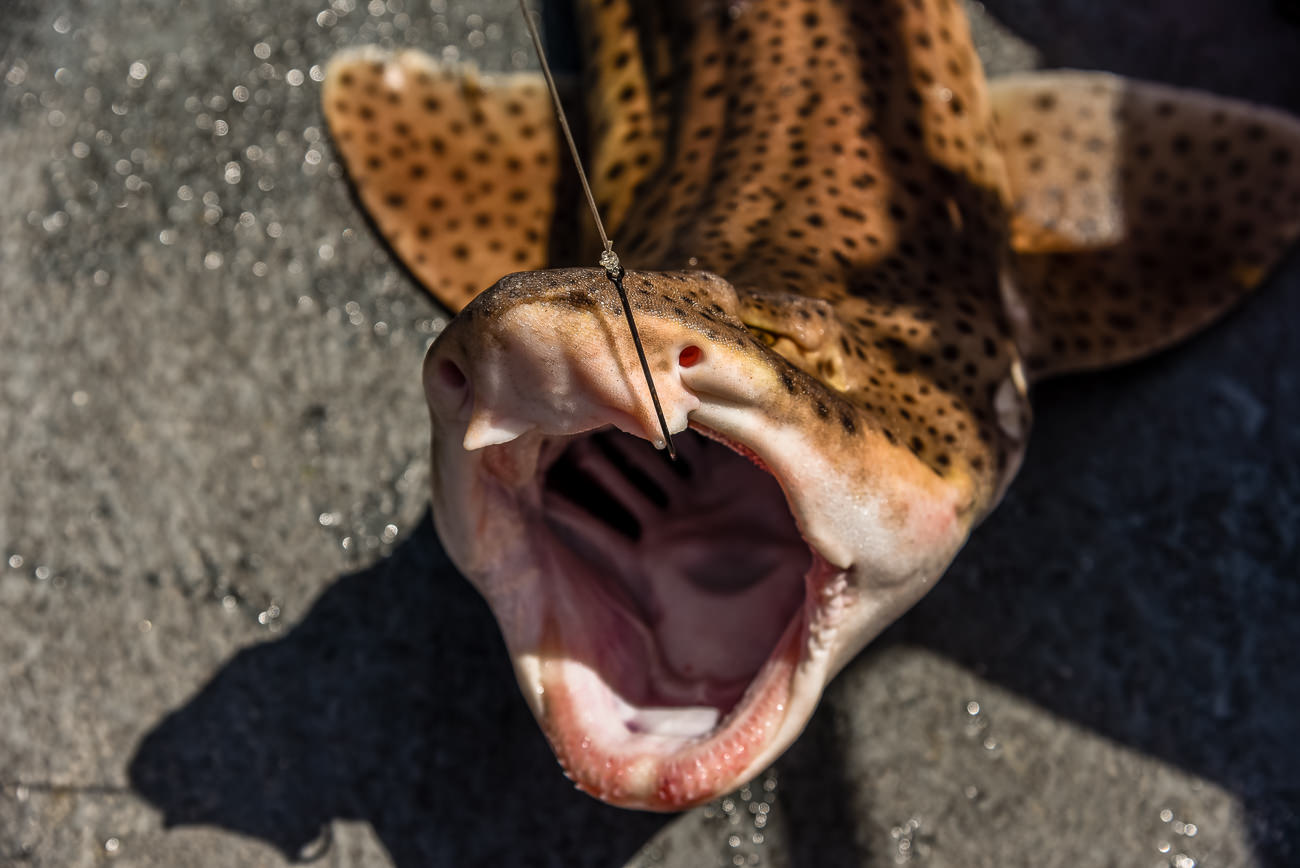 The gaping mouth of a bull huss

A couple of thornback ray did put in an appearance but Gethyn was disappointed that the numbers were low. Like any new mark further visits will be required during alternative tide periods in order for a pattern to be established. 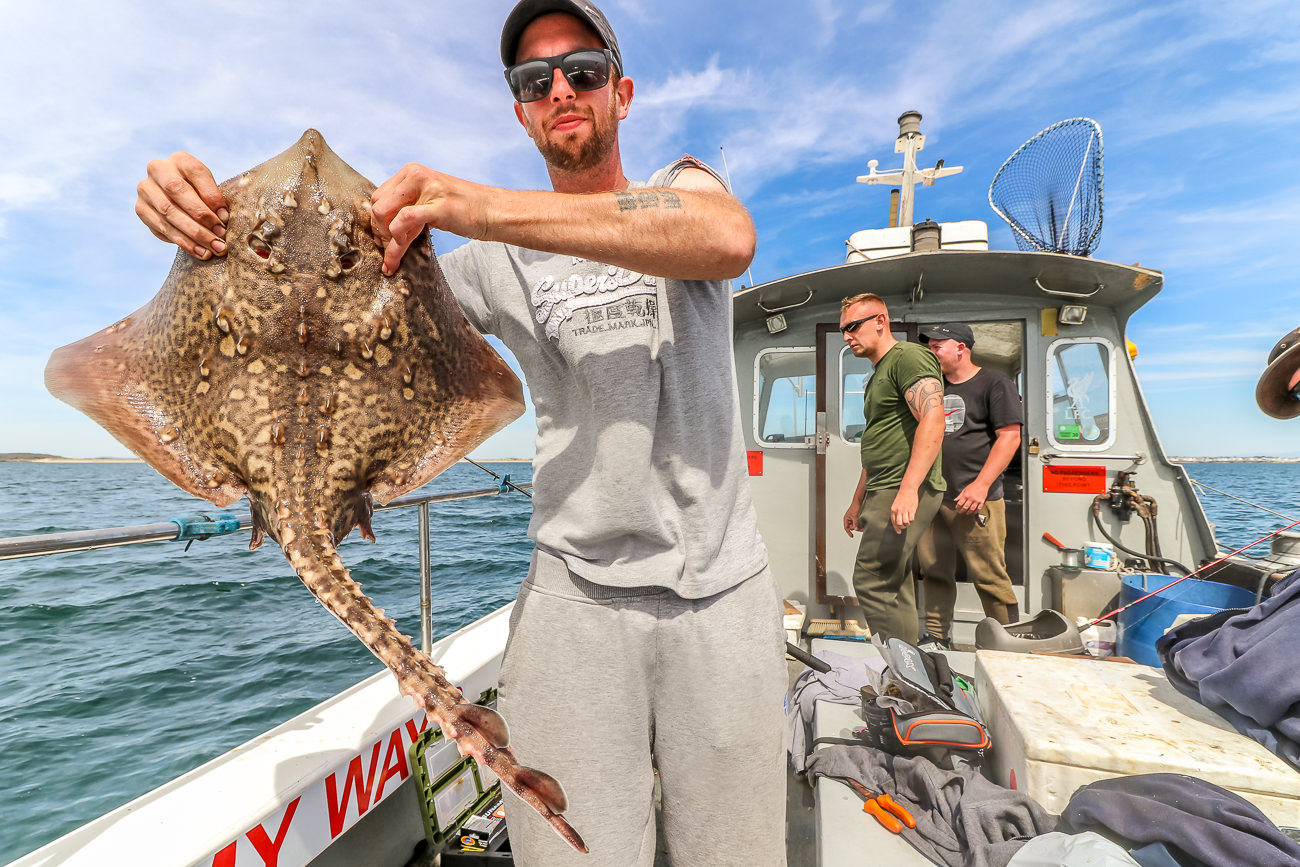 Martin Bailey with a thornback ray

The rays here were certainly thorny, with spines on the underside and right out to the perimeter of the wings as can be seen in the gallery below.

As the afternoon wound to its hot, tiring close the best hound of the day was boated. Dean Jones decided to use up the last of the peeler crab and his initiative was rewarded with a smoothhound of 17lb 1oz. A quality fish at any time.

A prime day out aboard a new boat that had me only occasionally thinking happy thoughts of the old My Way. Conditions were tremendous, quality fish showed up and the skipper did his usual sterling job of keeping all the anglers happy. 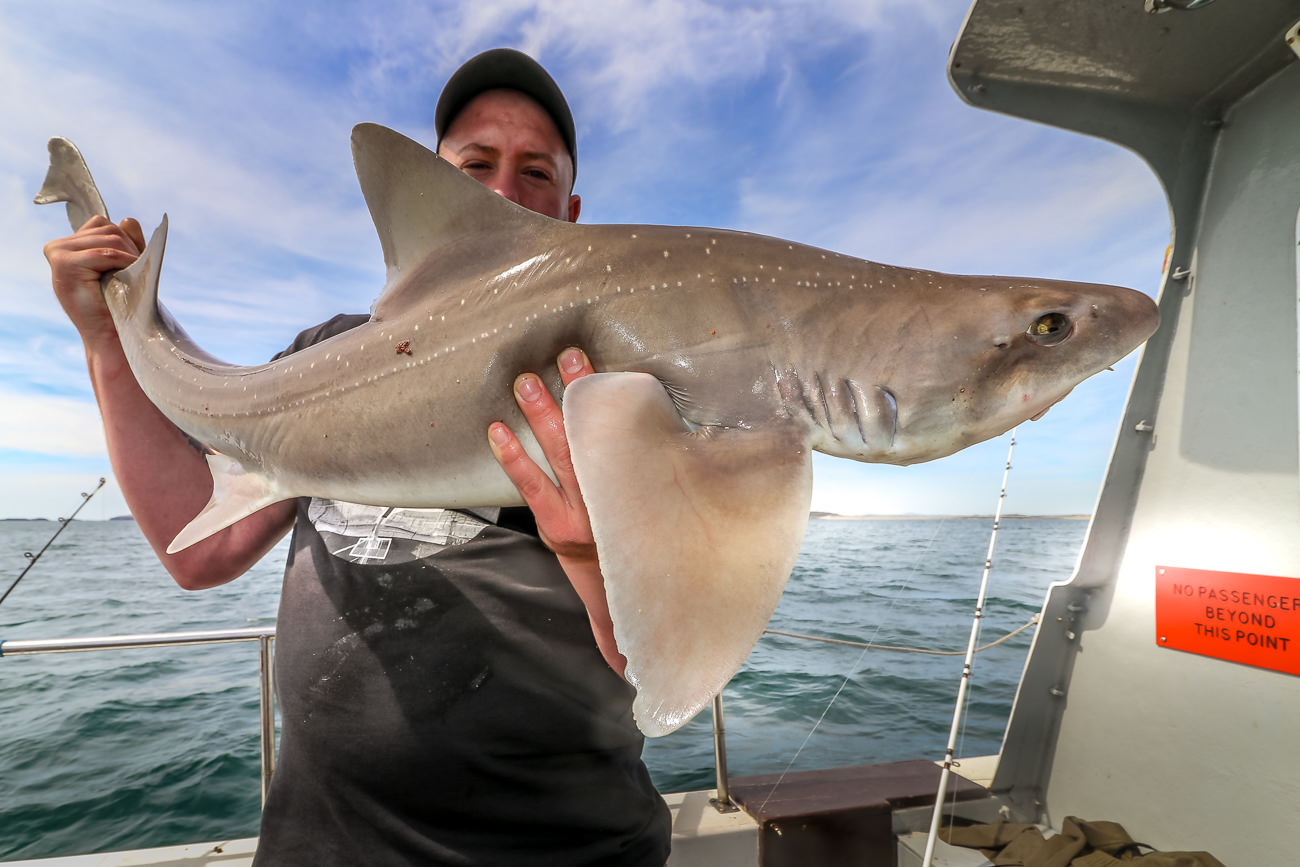 Whether you are an experienced angler or a beginner starting out Gethyn and My Way 2 provide the perfect partnership for a quality day at sea. The GoAngling website has an easy to understand calendar showing the status of bookings for every day of the current year.

Once you have decided on your day give Gethyn a call on 07971 924046, not to early or to late at night in deference to his long working day. He can also be reached via email.