The weather is always critical to the angler and over the past few weeks we have had a very annoying, prevailing, strong onshore wind that has really caused anglers problems. Boats have been unable to get to their fishing marks and along with very high temperatures beach anglers have found it hard to find somewhere comfortable to fish.

The thornback ray have slowed down this week; nothing unusual about that. July will see them move around into deeper waters, but there will always be a few to be caught and September will see another influx of rays

This week the wind dropped and the boats were able to comfortably fish. The charter boat Sophie Lea has once again been catching some thornback ray, smoothhounds and bass. Still a few tope to be caught, but not in the numbers we saw a couple of weeks ago.

The beaches and piers have had a slow week; there are fish to be caught but you will have to put in the hours to find a few, try and maximise your chances by fishing after dark after that intense heat has left the beaches.

St Osyth beach can always show a few fish and so it proved this week. Chris Taylor fished here and fished a midnight high tide. He was rewarded for his efforts with five thornback ray with the biggest weighing in at 7lb 2oz, all his rays were caught on pennel rigs. 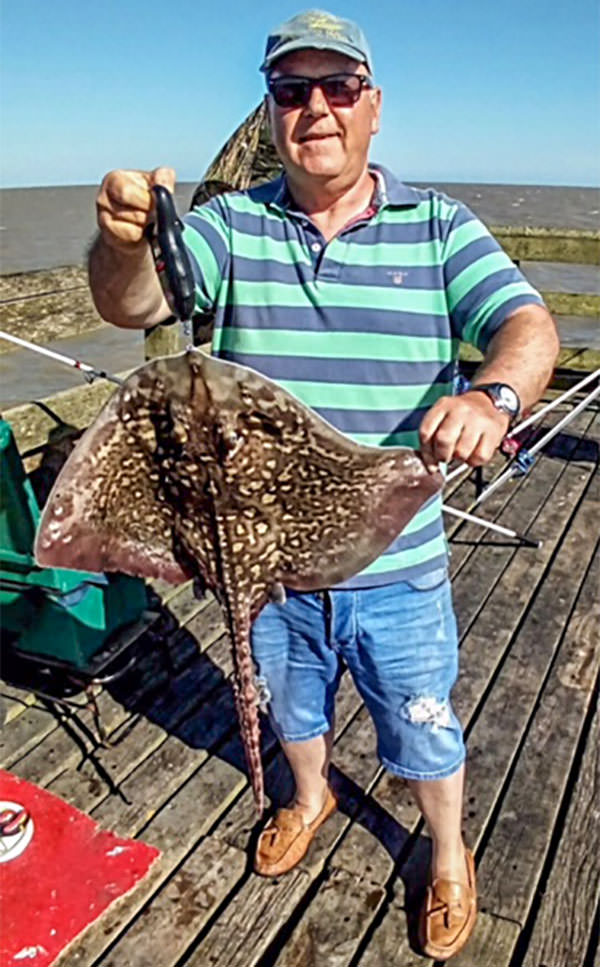 The Jaywick beaches have seen a few sole caught this week along with school bass, there is always a chance of a very big bass turning up and last year we saw a 14 pounder caught here.

Clacton Pier has seen the odd thornback ray along with bass being caught on ragworm baits, soles are also starting to show well here too.

The Holland seafront has had a slow week, plenty of crabs feeding, ready to take the anglers’ baits within minutes of casting out. Always a chance of bass and sole here.

Walton Pier has probably been the top venue this week, bass to 7lbs have been caught on squid baits along with a few thornback rays from the top of the pier.

Martin Grossman from Southend fished the pier on a midweek ebb tide and he was rewarded with a nicely marked thornback ray from the top of the pier.

I also fished the pier during the week, but alas all I caught was a couple of eels and a pouting.

Fish were very hard to find and not all anglers caught, top angler on the day was Dan Winter with Colin Harris second and Peter Harris third.

Small eels, bass and flatfish made up the catch. Over the season the top six anglers were only separated by just a few points, 680 sizeable fish were weighed in with most being caught in the month of December.

Gethyn Does It His Way On My Way 2